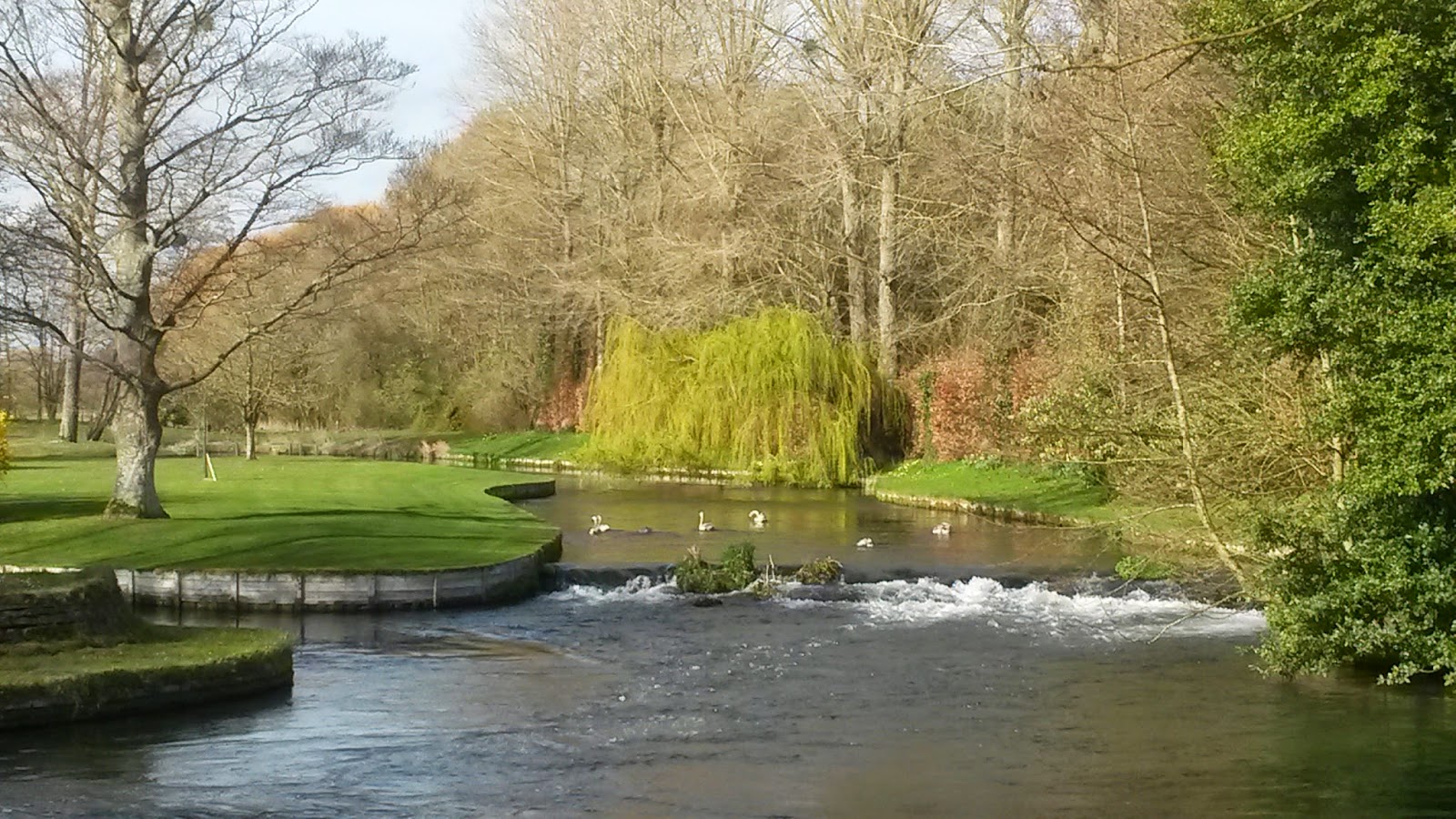 It was a lovely sunny day on Monday and I was at work and loved riding my new mountain bike into work. It felt so much easier to ride than my old worn out bike. It sure was a pleasure to ride rather than a chore. So, during the working day I had decided to go for a bike ride straight from work. I do like to plan things though so I went onto Google maps to try and work out a route. After a while I thought about cycling to Stockbridge but then changed my mind to King's Somborne which would be a shorter loop. 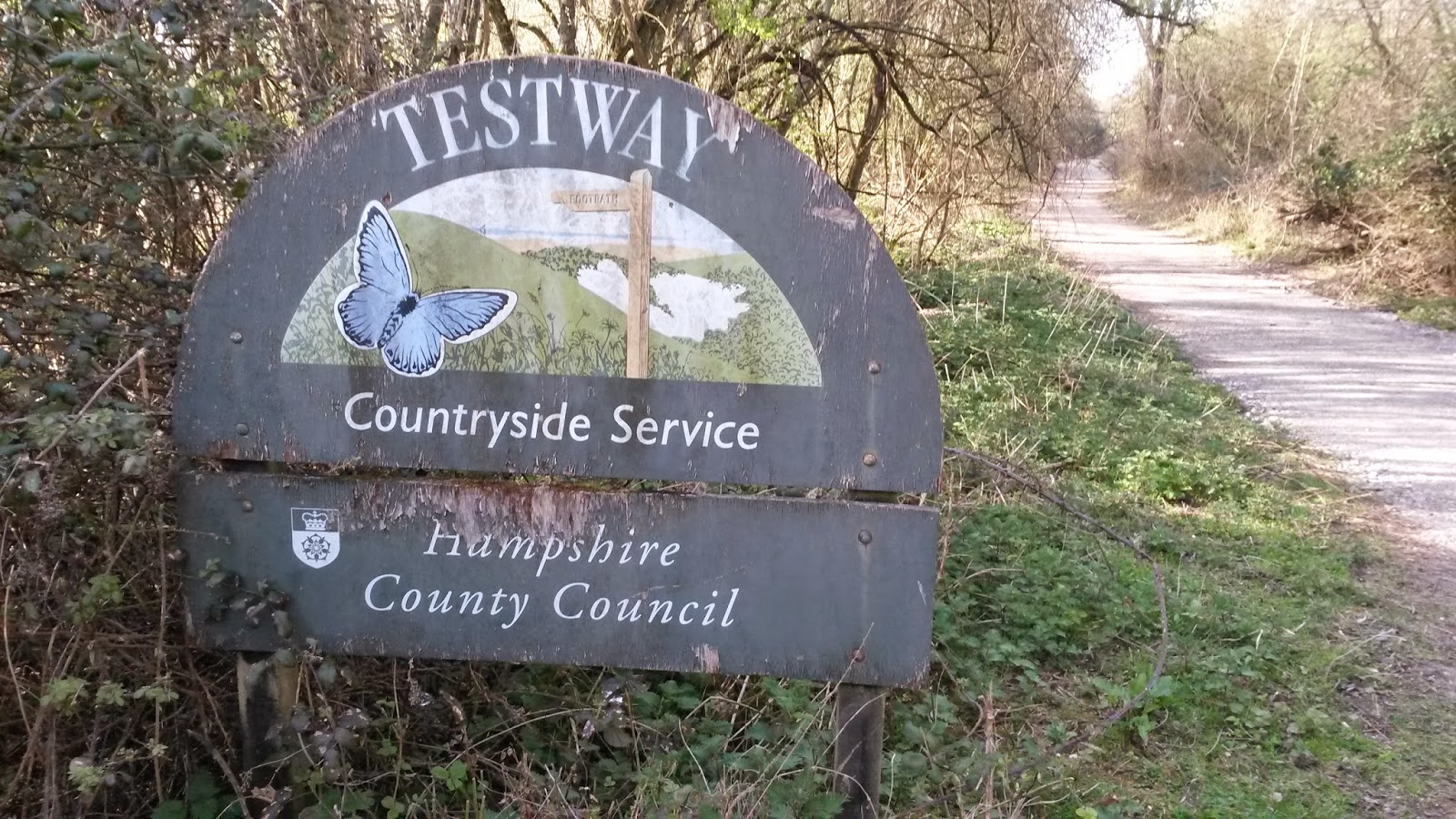 If you didn't already notice with my running, I am obsessed with planning looped routes and very rarely do any "out and back" routes. So, I had planned a route to King's Somborne via Romsey, Timsbury, Brook and Horsebridge. I was thinking that 20 or so miles would be plenty for me.
When finishing work, I decided to take a bottle of water with me and buy a large sausage roll and a snickers from the fridge at work for provisions. I had also written down the roads I needed after King's Somborne for my return journey through Eldon and Braishfield. 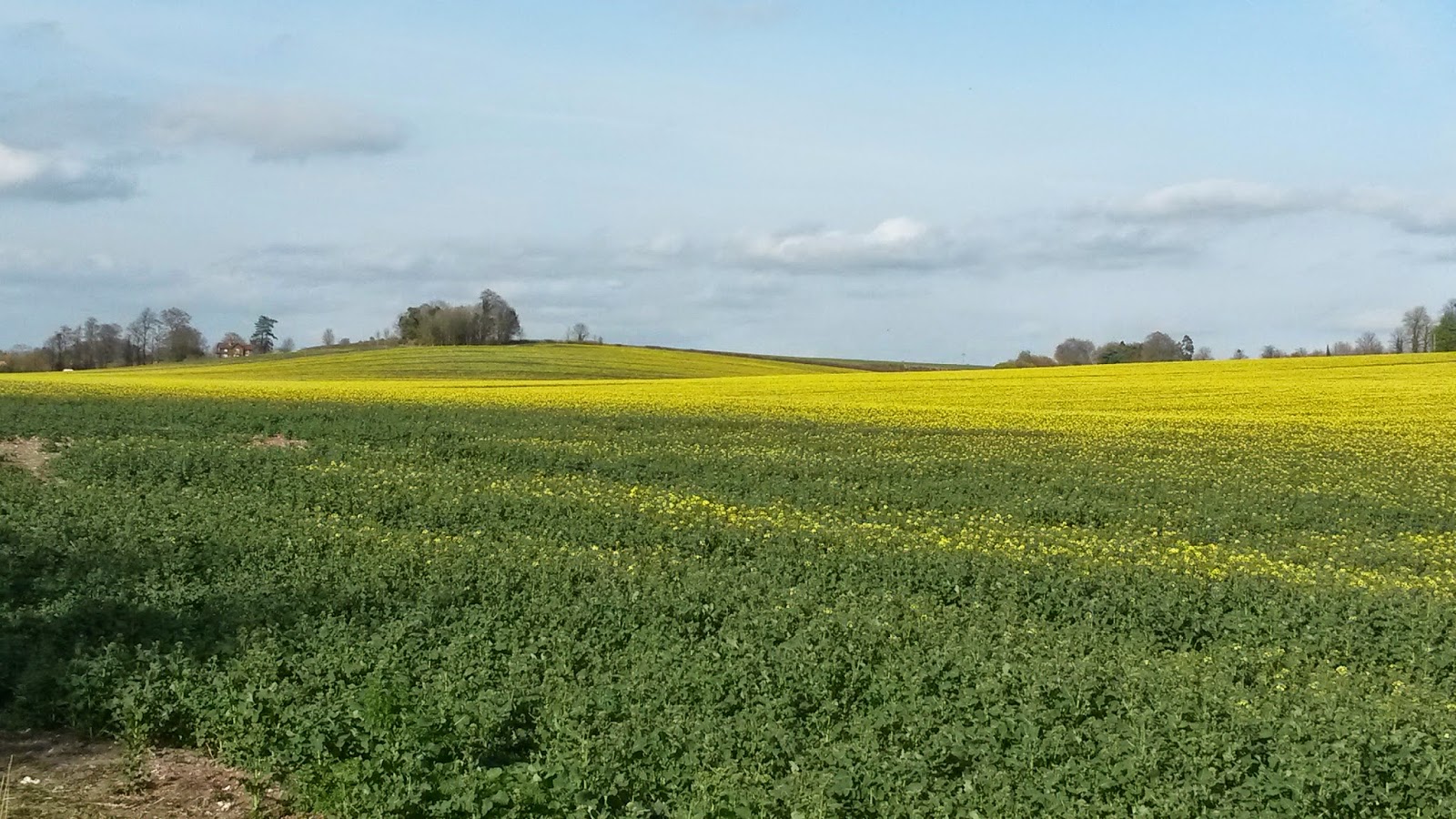 (A lovely looking rapeseed field along the Testway cyclepath)

Off I went from Nursling Ind. Estate to Lee lane. Onto Lee lane and into Lee and then into Romsey. I was quite warm already though as I was wearing a hooded top and a big coat. I managed to fit the coat in my rucksack and put the hoodie around my waist. I cycled past the Fishlake meadows where I could hear the angry sounding call of a Cetti's warbler and then onto Greatbridge road taking in memories of an old job I had for many years on Romsey Ind. Estate.

Into Timsbury and past the skate ramp I skated a few times at Hunt's farm. Past the Mottisfont road - The path now ends so it was time to cross the road and I was surprised when a lovely motorist flashed his lights for me to cross in front of him on the busy Stockbridge road. I waved and smiled of course :) 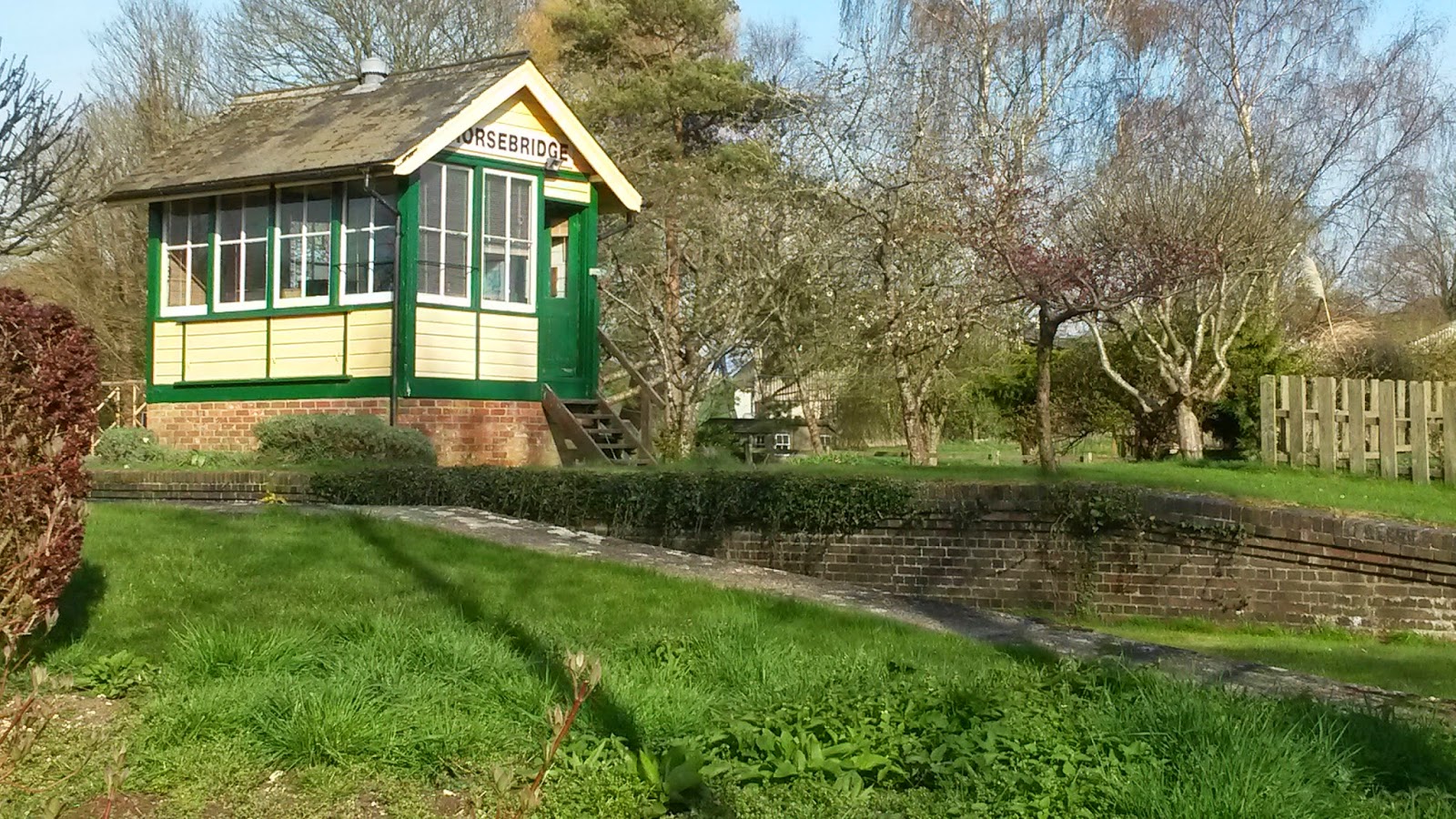 (The old railway line at Horsebridge)
The route now goes onto a cyclepath next to the Stockbridge road and goes all the way to Stockbridge but to the left is the Testway which eventually joins on to this cycle path. This route is actually an old disused railway line.
I pass a few houses at brook and then watch a Kestrel hunt in a field just before Horsebridge and see two Heron fly overhead at the same time.
I get to Horsebridge and cycle past the John O Gaunt pub and see the King's Somborne sign. Only a mile and a half a way. This route seems too short as I am really enjoying the leisurely pace of my adventure. Not at all strenuous in any way. I decide to turn back and get back onto the Testway cycle path and head for Stockbridge and decide to find a looped route (or hope for the best). 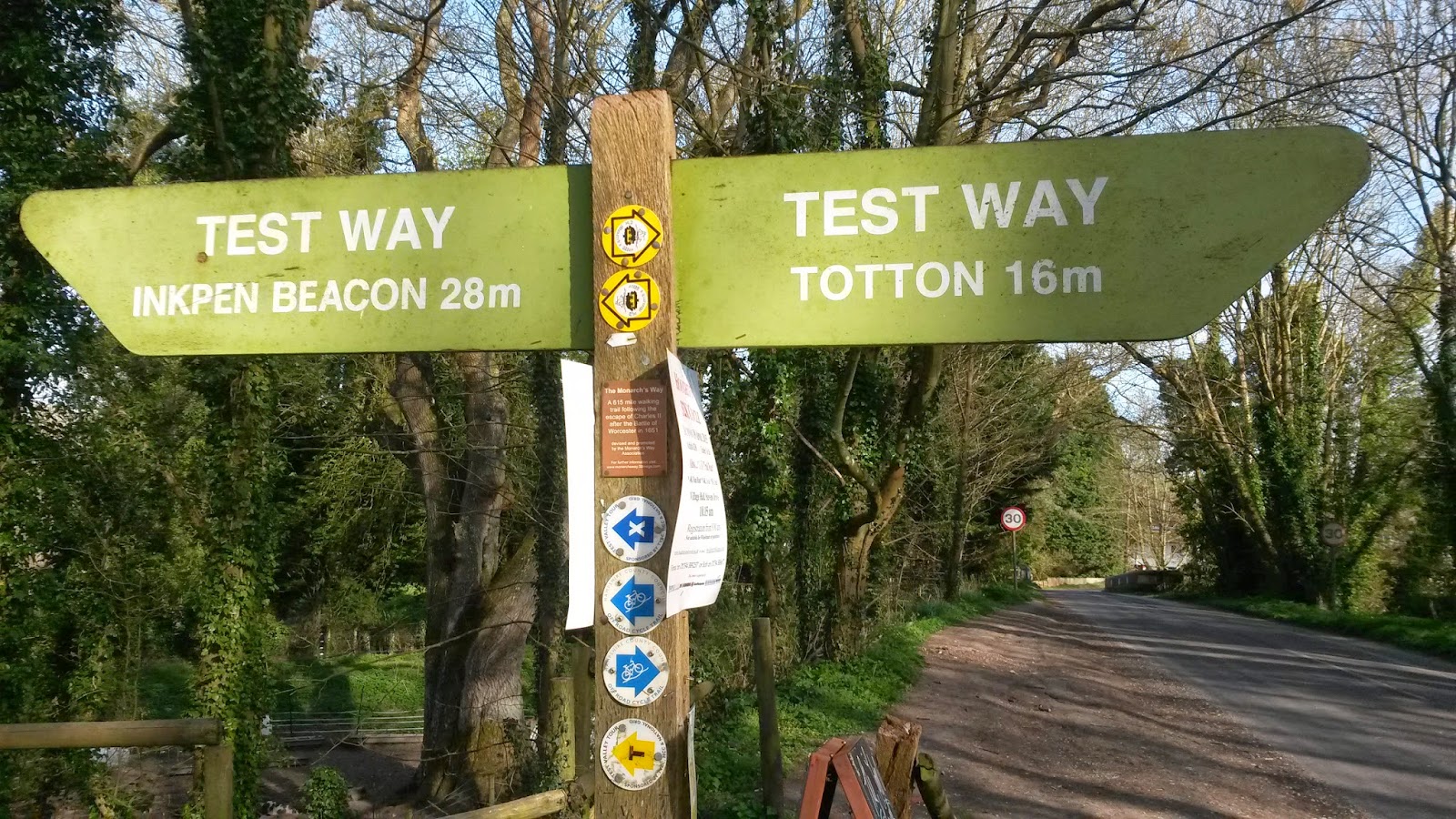 (The sign at Horsebridge)
I cycle on past the river test occasionally and say hello to the odd walker. I then pass a field full of rabbits which happens to be Stockbridge common nature reserve. I can now see the church and a few buildings which I know is the centre of Stockbridge. I do know this route quite well though as I have walked the testway as far as Stockbridge and have run 24 miles to Andover before. So here I am at Stockbridge! About 15 miles in and feeling good. 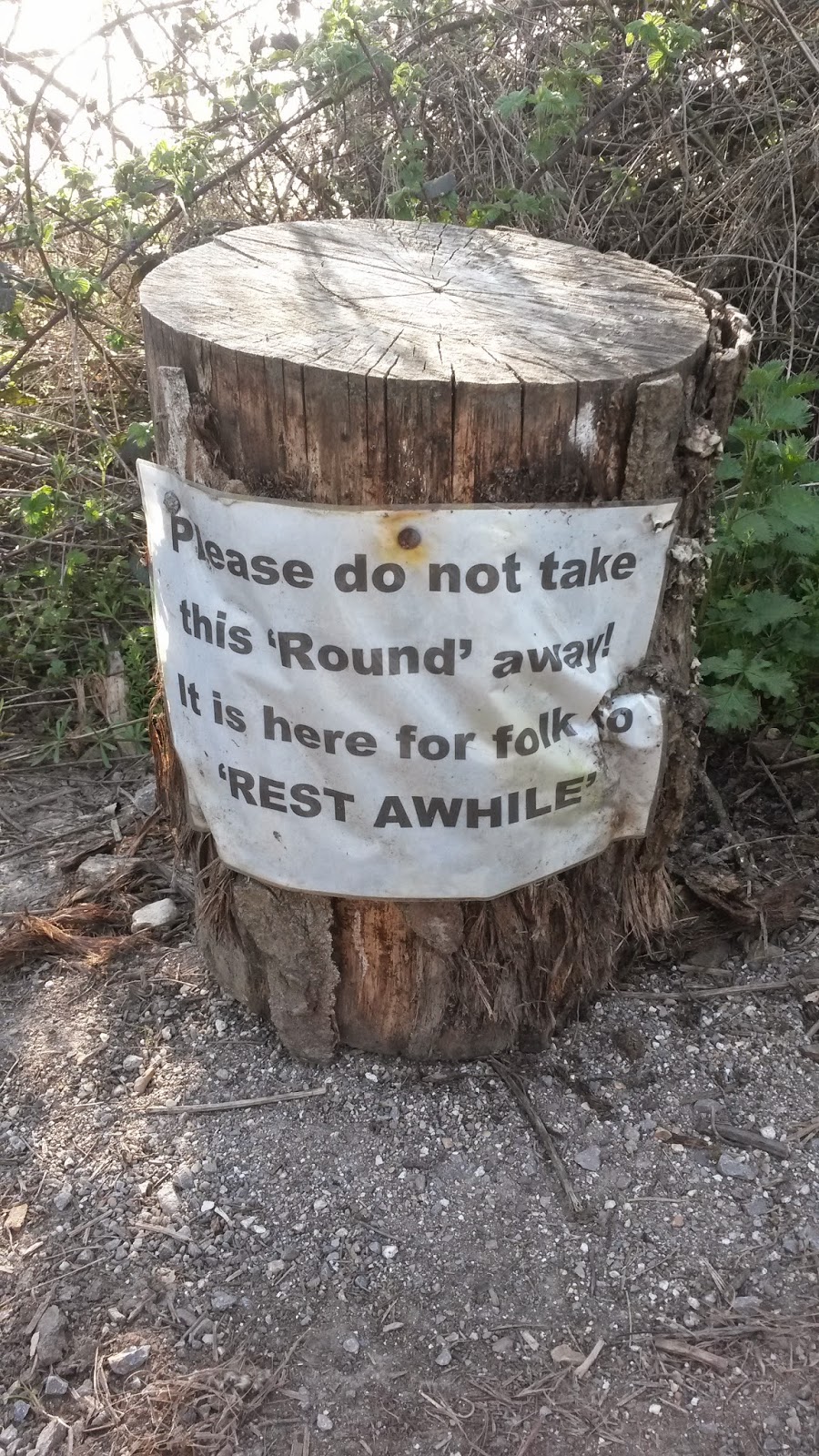 (They can't afford benches along the Testway)
Ok, I was kind of sure that I was heading in the right direction at the Stockbridge roundabout. Left is the shops, Longstock and Salisbury, Straight on is Stockbridge and the School where I did the Stockbridge 10K race once and came 11th! Right would be the Stockbridge road back home. So, that only left me with one exit which said Winchester.
Oh My God! What a hill! I cycled pretty hard up this long hill. My quads were really feeling it, I was out of breath and sweating a lot. What had happened to my relaxing bike ride? I had gone from a comfortable route I knew to a tough route with sense of real direction. I was also hoping to get home before it got dark as I didn't have any bike lights either. It was nearly 6pm when I got to Stockbridge already. 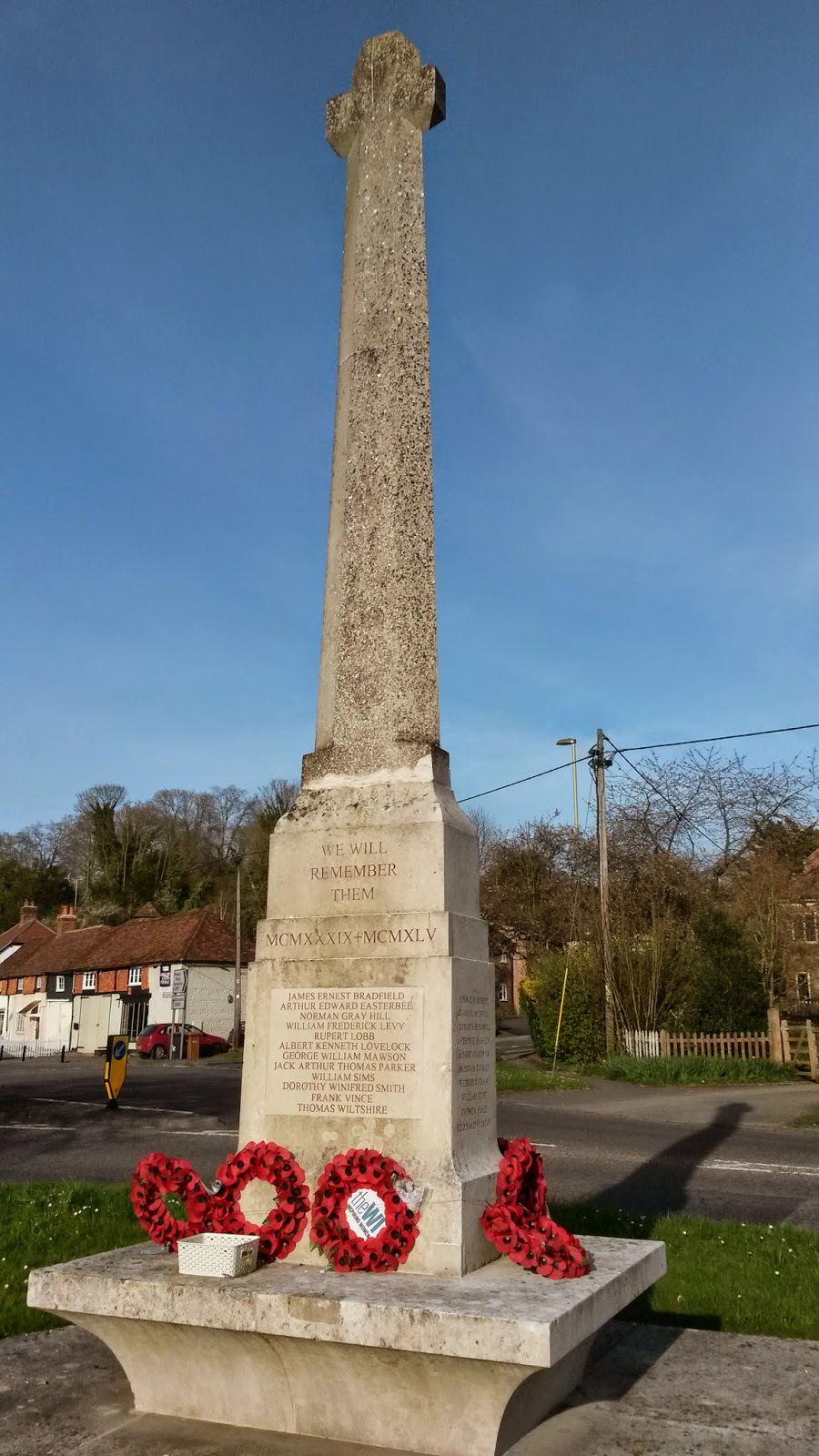 (Decision time at Stockbridge roundabout)
I made it to the top of the hill and then it was a massive downhill. I was going so fast and my eyes were watering with the speed. I then passed "Stockbridge Down" which looked quite nice.
One hill I cycled up there was a car speeding behind me. He was going to overtake but then he saw a car coming the opposite way and slammed on his brakes screeching loudly to a halt behind me. I stopped and swore at the guy many times as he waited for the other car to pass and he didn't even have the nerve to make eye contact with me. People like that really shouldn't be on the road. Makes me so angry!!! Anyway.....
There were a few undulations after this. A series of ridges and crests as I liked to call them. I then realised that I didn't know the difference between a ridge and a crest and when I googled it at work today, it appears that there is no difference.
So, I seemed to be heading towards Winchester until I saw a sign for a place named "Crawley". It had to be done. The sign said it was only one and a half miles away to the left. I went there, took and few photos and did a loop of it. It's a lovely little village with a 14th century church and a little pond with some Mallards and Tufted ducks. 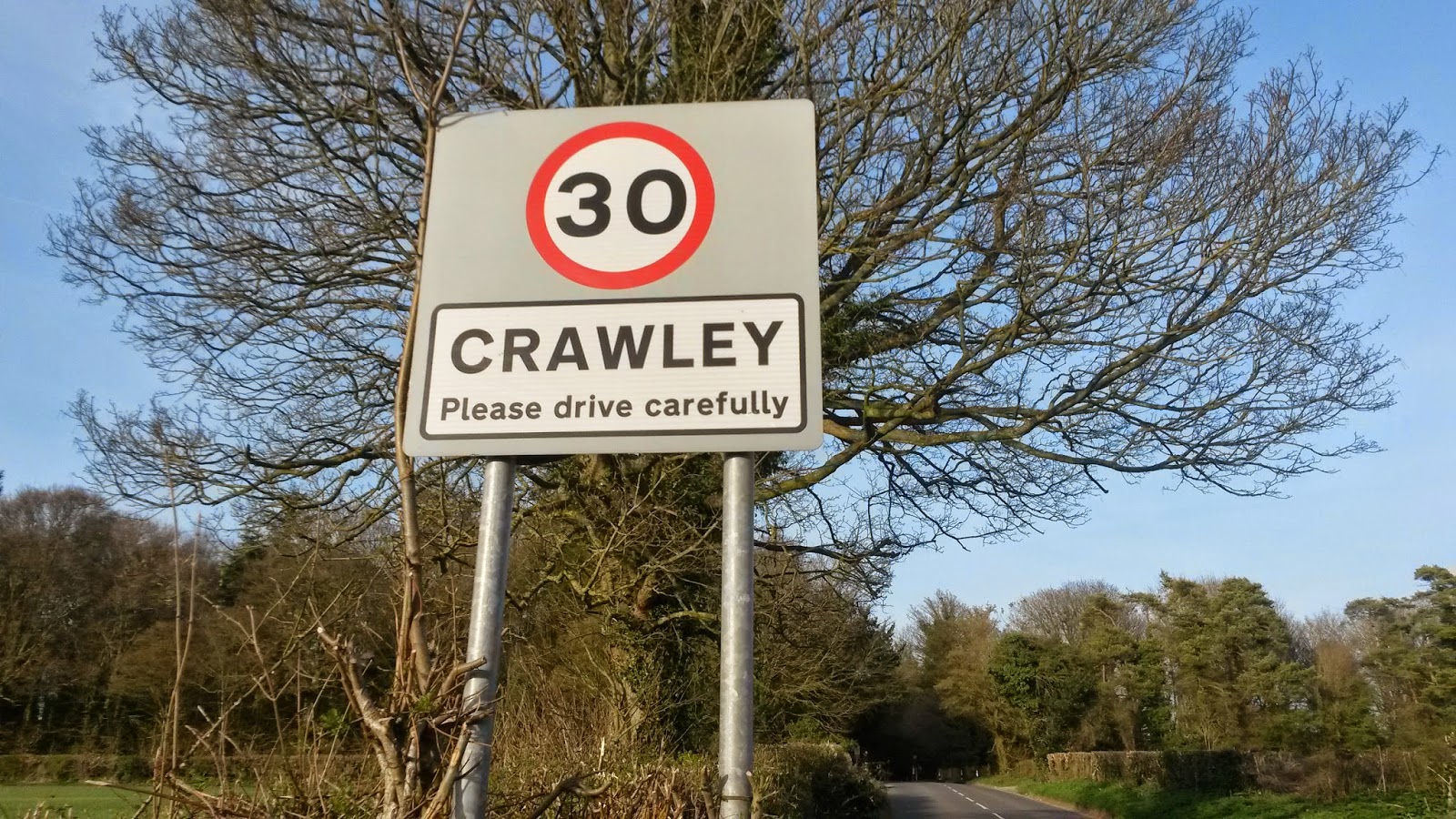 (Crawley is about 5 miles from Stockbridge and about 5 miles from Winchester)
I wasn't too sure where to go after the loop. There was Winchester to the left and Stockbridge to the right. There was a road straight on but the sign didn't tell you where that road went. My phone was now dying but I had a quick look on google maps before it died and it looked like it may take me to King's Somborne.
I was worried that I could no longer take any nice pictures of my surroundings as I had just seen a massive hare standing tall in a field. Nevermind that it may be dark soon, I don't know where i'm going and I may get a puncture and need to make a phone call! Also, I really wanted to eat my Sausage roll and Snickers now but I felt like I had to push on and get to slightly familiar surroundings at least. 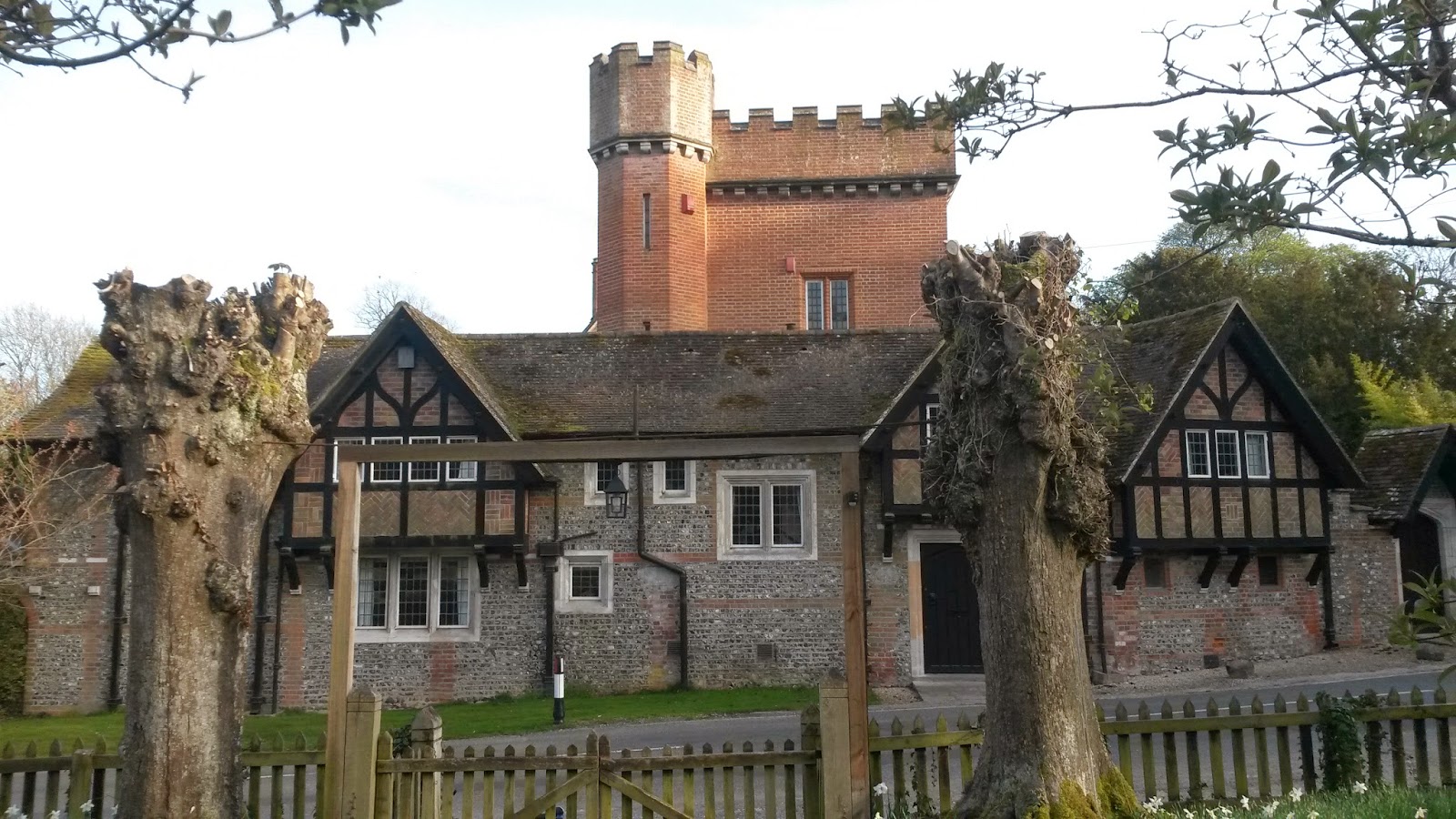 (Taken from the 14th Century Church in Crawley)
So, I was all alone on this Country lane of fields for about 3 miles without seeing another person. (Turns out it was called Littleton). Just lots of Pheasants and crows in the fields and a few Red legged partridges. I pass a place called Rookey farm and then come into "Up Somborne" and see a Sign for "King's Somborne". This was a good sign although it had gone 7pm already and I hadn't even made it there yet. I was guessing that I had an hour of daylight left.
I got into King's Somborne and was surprised how lovely it was with the old little shop and the stream running down the middle of the road and also being part of the Clarendon way. I had been passing through this place in a car many times but never really saw much. We also used to skate on a ramp here back in the 90's. 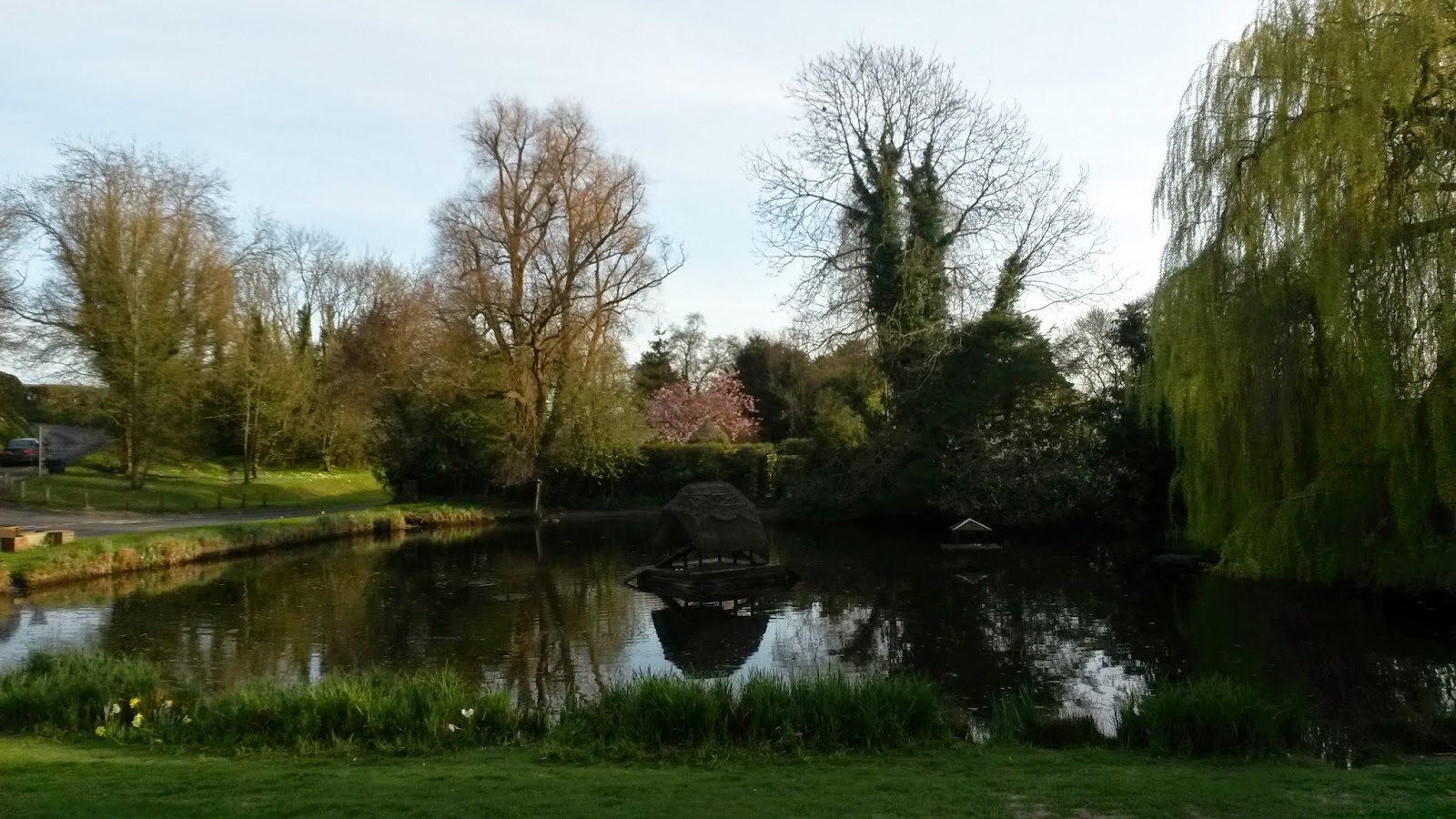 (The pond at Crawley)
Anyway, I was happy now as I had written down the directions from here to Braishfield. I found everyone in King's Somborne to be very happy and friendly. Every single person I saw smiled and said hello. I wish the people of Romsey would take note! Probably the most miserable people i've encountered in all my travels even though I love the place.
It was just a case of making my way to Eldon. I found the roads easily and was soon passing through a nice looking estate on a hill. I think this may have been Eldon although I know the Eldon road is about 3 miles long. The road soon narrows down into a lane and then for those 3 miles it's just farms. Sadly, the first mile was mostly uphill. I actually got off my bike for a bit to walk as my legs were a little bit numb now. There was lots of woodland and lots of flowers. Primrose etc.. No photos though i'm afraid. 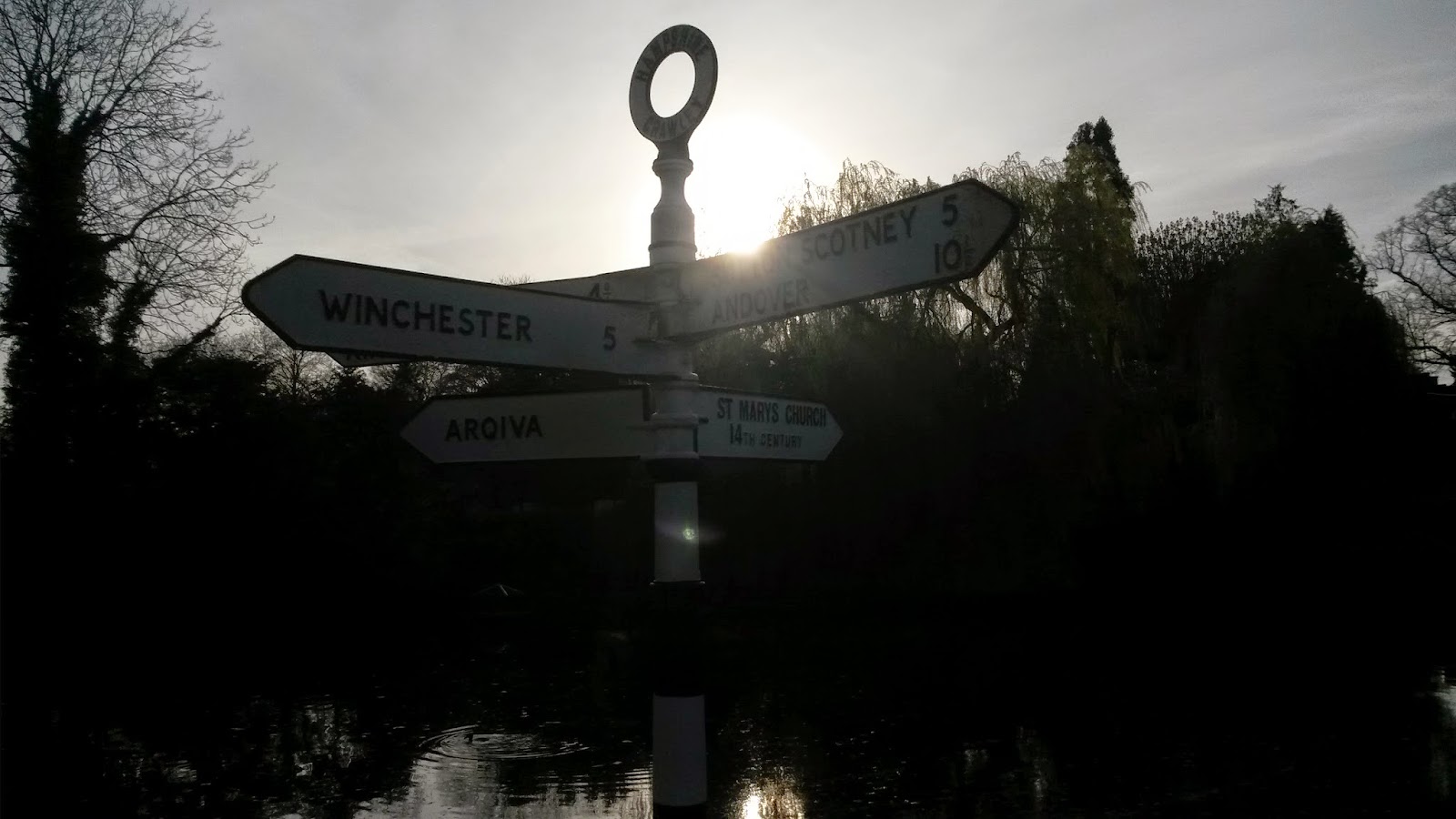 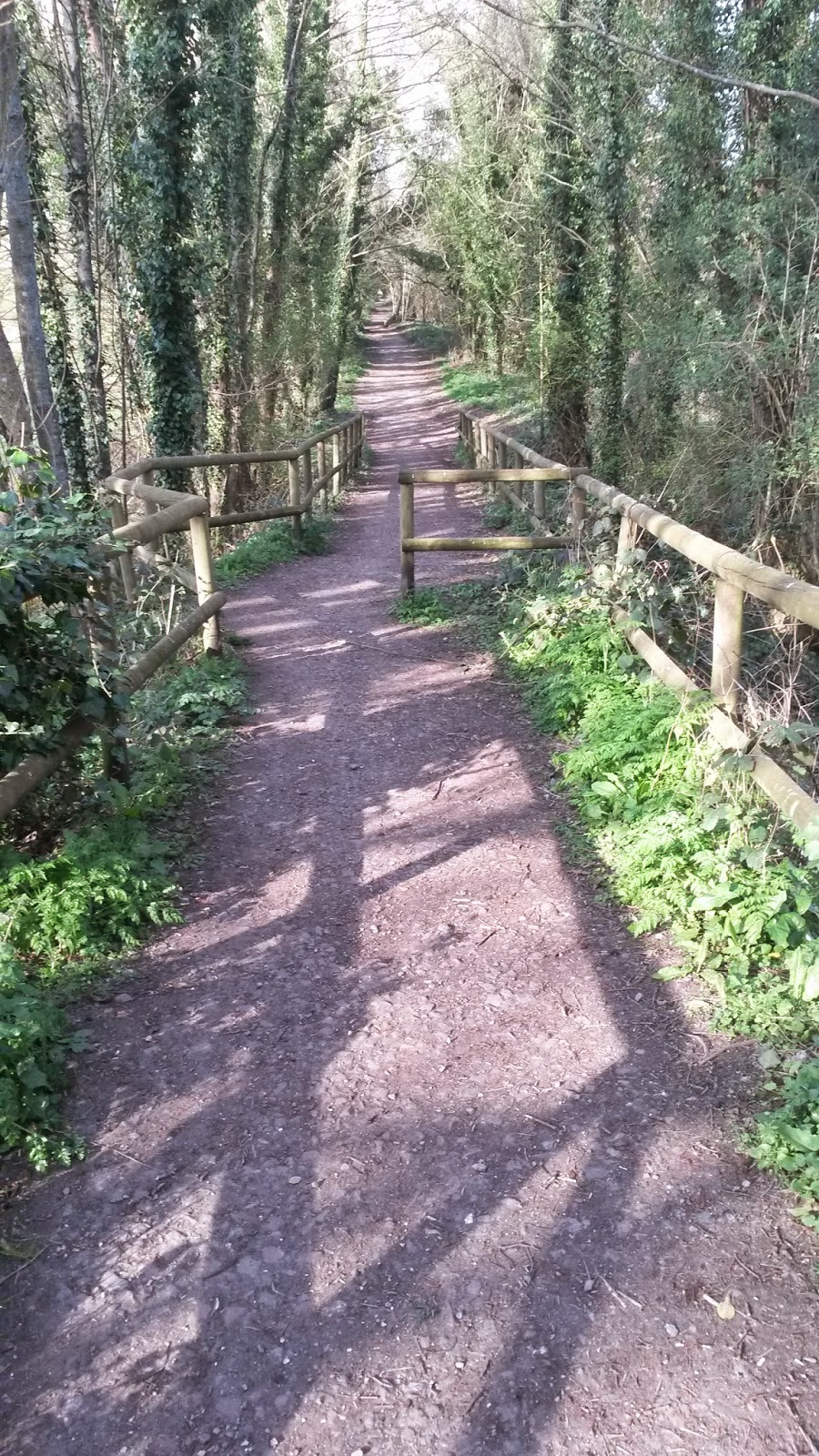 (Horsebridge again)
I was soon into Braishfield and now feeling much more comfortable about making it home in the daylight or soon after. A quick cycle back into Romsey where I finally decided to eat my squashed sausage roll and snickers and then North Baddesley and Rownhams. Lordshill and home about 8.15.
4 lovely hours of cycling in the sun and about 40 miles :) 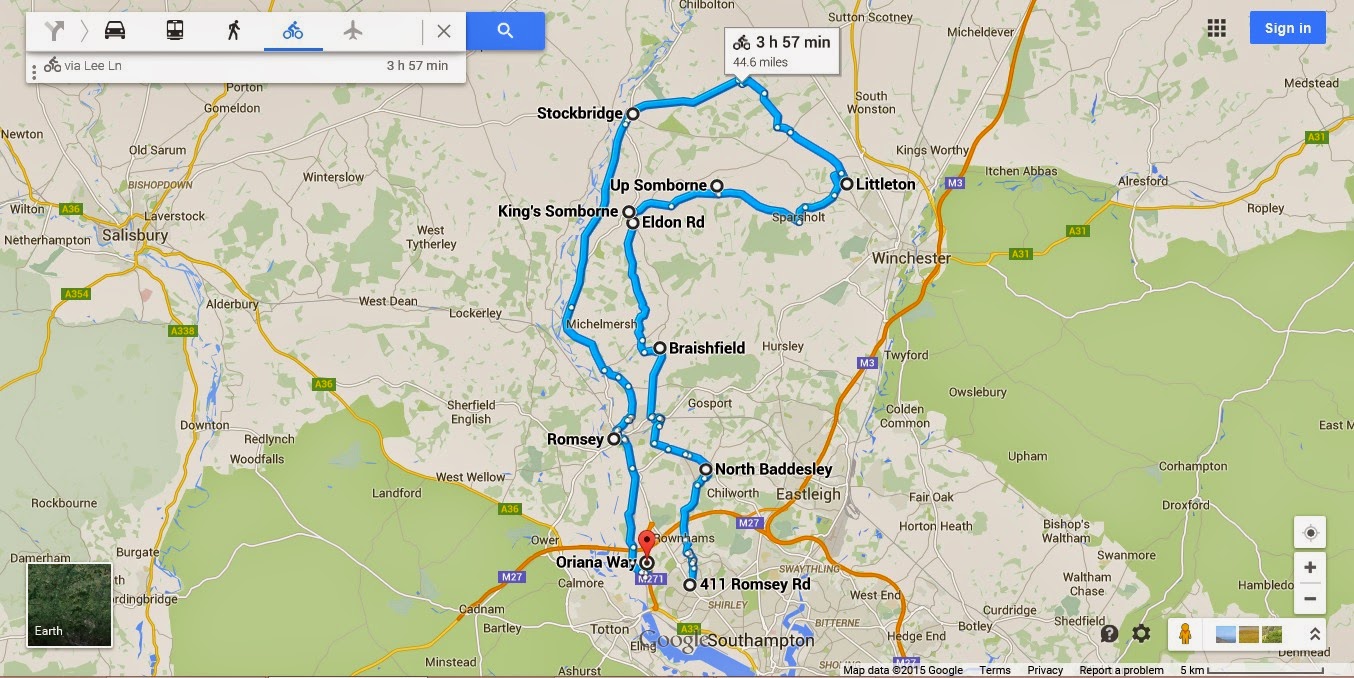