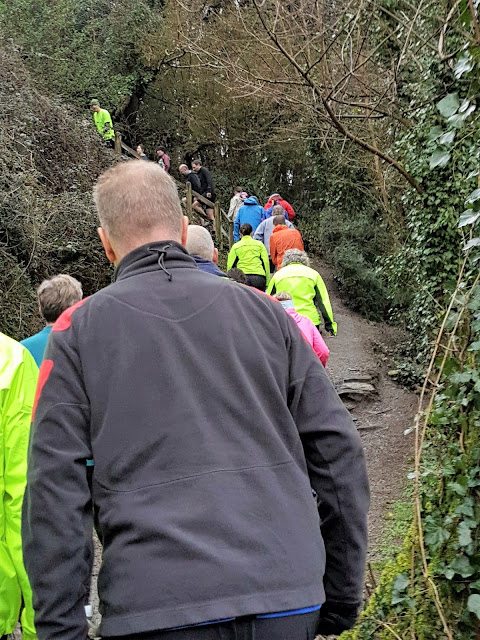 It was a tough decision to make. Should I run Trelissick parkrun? I had been injured since January and only ran 2 miles the day before, there was a bit of knee discomfort but I got through it albeit very slowly with some heavy breathing.
I was discouraged again when I woke up to the sound and sight of torrential rain. I knew it was a 10 mile cycle there along the coast to coast path with some challenging terrain and a couple of very big hills. Coffee and crumpets first to wake up.... Fuck it, let's do it! 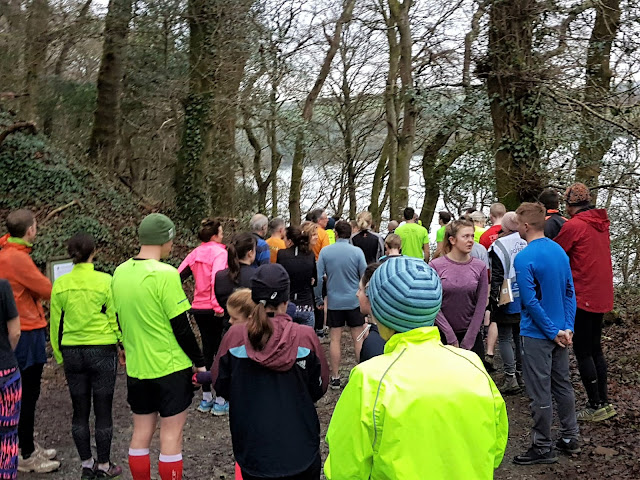 I leave the farmhouse at 7.15 and arrive at Trelissick at 8.30. Perfect! I am soaking wet though. My feet are freezing and wet despite the waterproof clothing. I have spare socks and a t-shirts though. It's still quiet but I chat to an elderly man who tells me about the parkrun and informs me that he is to become the next race director at this event. We chat for 10-15 mins and the national trust site is starting to get busier. Another guy comments on my lack of clothing, which makes me observe all the other runners wrapped up in coats and leggings etc.. I shrug it off and smile... "I'll soon get warm". 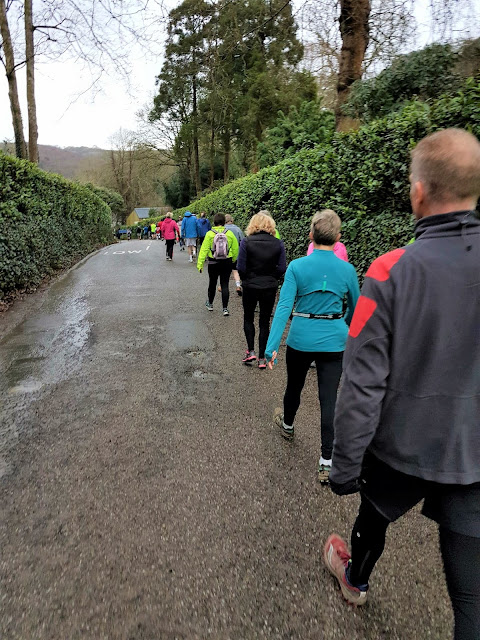 At 8.50ish there is a race briefing where we are told about the course and at the end this little girl turns around and says "Mummy, what does undulating mean?". They ask if there's any visitors. Someone says Somerset, someone jokingly says Cubert and Truro. I was waiting for my mate Larry to shout "Singapore" but he wasn't there.
We then walk about half a mile to the start. Down the main road on the right as the King Harry Ferry is located at the bottom of this hill. We then cross the road and walk up some steep steps and into the woodland with what I am guessing is the river Fal on the right. We get to the start where we are told that it may get congested at the start. I look around laughing to myself thinking... they obviously haven't done Southampton parkrun. There is a total of 83 runners here. No dogs and no buggies. Just as well as the buggies would probably need tractor tyres in the hilly, waterlogged field. 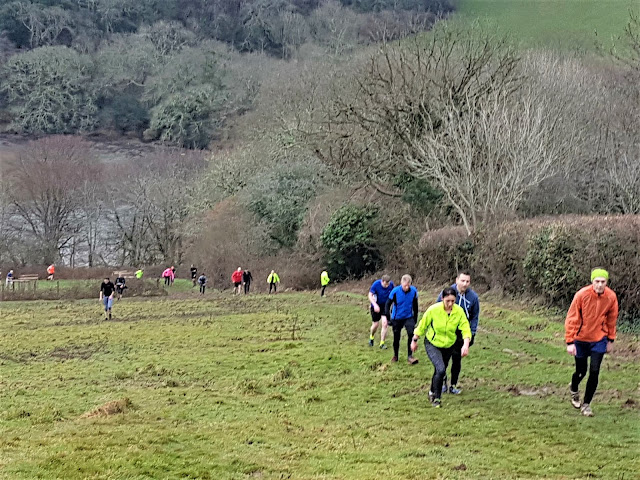 And we're off. I start mid pack and there is no congestion whatsoever. It is a downhill start and an out and back course, which does mean a nice uphill finish. The terrain is a little tricky as it's bumpy, uneven trail with bits of rock and slate everywhere. It gets easier though and my knee feels okay. At the bottom of the descent is a little stream with a stepping stone. Not sure my balance is good enough for the stone so decide to just try and jump the stream. I don't quite make it but don't get too wet. 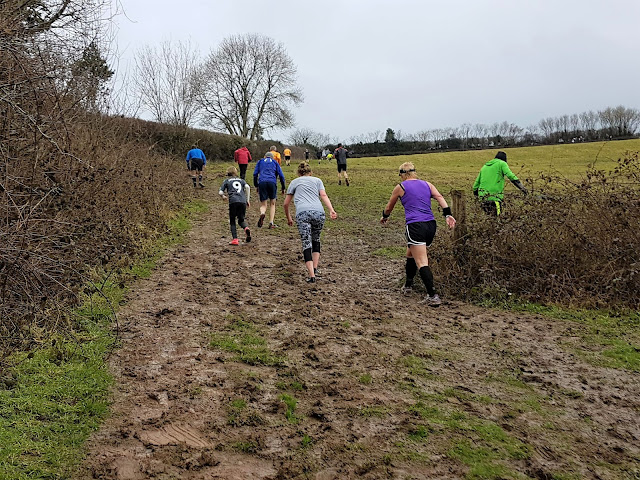 The trails continue and it's nice and flat now. At this point, I am thinking that 5k is such a long way as I've only done a mile and already my breathing is becoming more laboured. And then we hit the field. It's muddy, it's waterlogged and it's straight uphill. I decided to walk it along with most of the others who wore road shoes. This gave me the opportunity to take a few photos of course.
When you reach the top of the field, you run from left to right looking for the least boggy path and then descend. This was the technical bit! I dared not run as I was already sliding all over the place. I was close to falling over at least 3 times despite being very cautious. Very surprised I stayed upright. Obviously the marshal at the bottom was laughing like a drain at our levels of concentration. 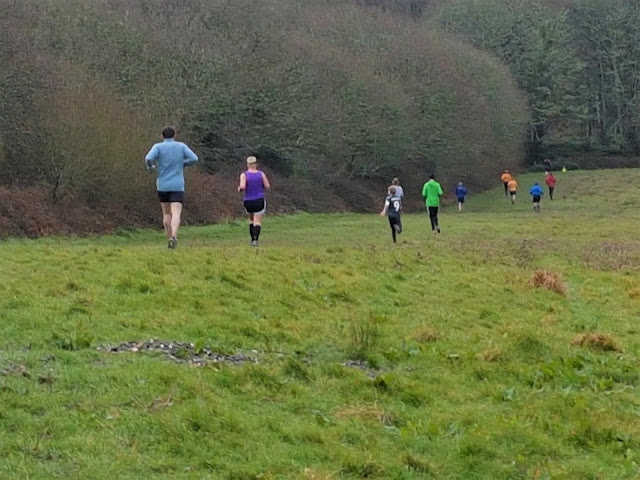 We were just over halfway and now would be running back the way we came. What a crazy course I thought to myself. I bet it's nice in the summer though. I exchanged a few words with another guy. He had quite annoying squelchy shoes from running in the flooded field... or so I had thought. He was just behind me but I was picking up the pace a bit now after my second mile was over 11 minutes. Knee was hurting a bit too but around 2.5 miles, I had found a second wind as someone had commented as I passed them. I even managed to balance on the uneven stepping stone on the return journey.
Someone also commented on my squelchy shoes as I passed them too. I was passing people happily but knew the hill was to come soon. 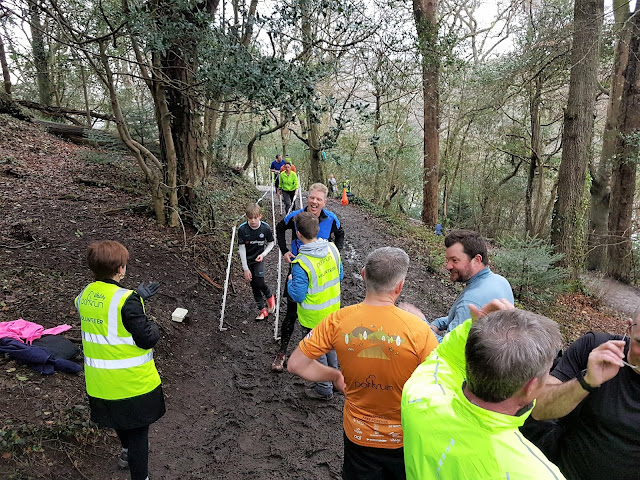 The last climb is roughly a quarter of a mile. I wasn't going to walk, I kept on pushing myself as I saw more opportunities to pass other runners. It was a bit late to start getting competitive but I was enjoying it all the same. I crossed the line in just over 28 minutes. Which will be a course pb as it's my first time here. It's good not to set your targets too high to start with. Although, seeing how boggy the field it at the moment, I had decided that I was going to volunteer next weekend. I was happy enough with 32nd on my come back tour of running. The knee was hurting but who cares about a bit of pain right? 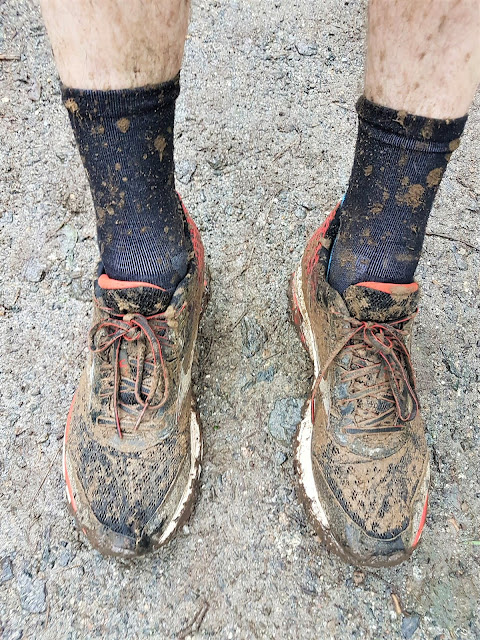 I took my shoes off and wandered into the National trust café for a Latte. I sat there and some guy asked if he could join me. Somehow we got talking about Genealogy and some other stuff and I almost felt intelligent for a while. Then another guy asked to join our table. Three complete strangers chatting about life, beer and cake. That's what's great about the community of these smaller parkruns. We all put our names down to volunteer too, so i'll see them again next week for more coffee and banter. Then Another 10 mile cycle to get home... but it was worth it :)