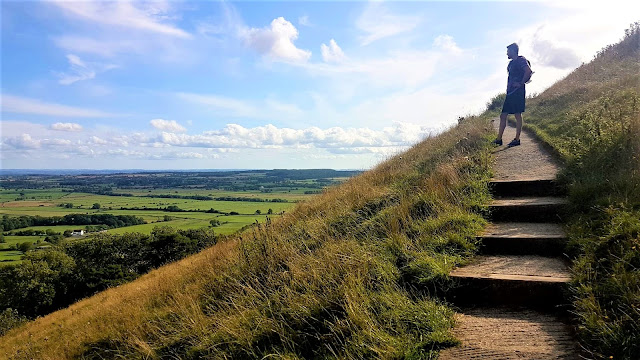 I first heard of Albion running back in 2015 when I entered the first Ham & Lyme 50k race which runs from Ham hill to Lyme Regis. Dave the race director had also written a very good book about running and mental health called “Everything will work out in the long run”. I had entered another race of theirs a few years back but was unable to run due to injury. I was keen to get back to another ultra and another Albion event. Straight away my friend Carl was keen to enter the Conquest of Avalon with me. We dithered about the 50 miler and the 30 miler but sensibly chose the 30 miler. It starts from Castle Cary and finishes at Glastonbury. End to end races are the best for me as you really feel like you’re on a long journey. I find the out and backs a bit boring but can tolerate looped courses. 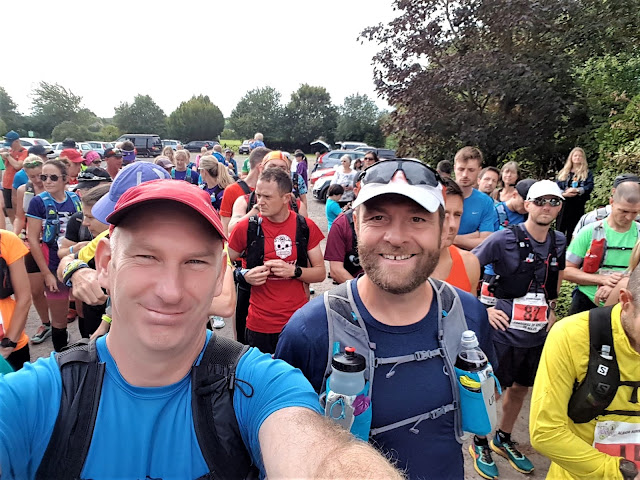 Anyway, my job was to sort out logistics, which I did but without too much logical thinking. Friday we would stay in a pub in Castle Cary called the George and Saturday we would stay in the George hotel in Glastonbury. Ah but wait! I was getting the train to Castle Cary from Southampton and Carl was driving from Cornwall to Castle Cary. We need to get our stuff to the finish line in Glastonbury. There was an option to get a bus back in the race but we declined on entry. So, we met at Castle Cary, booked into the pub and packed what we didn’t need and drove to Glastonbury. We found somewhere to park the van and had a few beers and got a taxi back to Castle Cary. In the morning we would pack a small bag for the race bus to take to the finish. Plus we had our running backpacks. We got there in the end. I’m so glad we did it this way around though as there isn’t too much going on in Castle Cary. 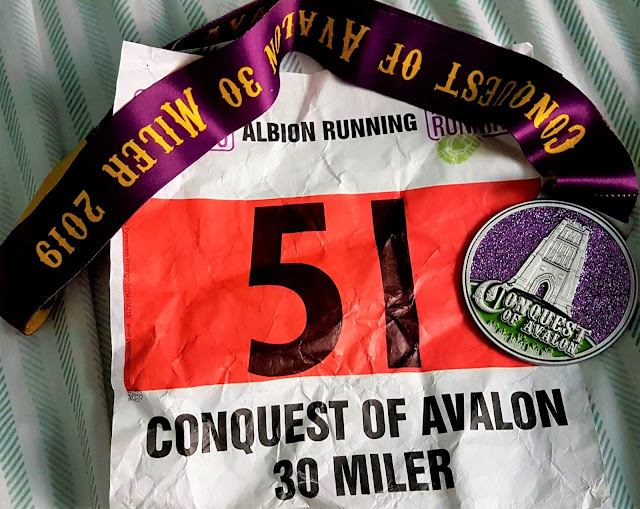 We walked to the start of the race and took a few detours getting lost along the way. We picked up our race numbers and said hello to Dave. We waitied around for what seemed like forever, full of nervous energy and excitement. Dave gave a really funny speech about the race and threw in various random stories for our amusement while we waited for the hour to approach. And off we went. Out of the community centre, past a gate and left with a nice downhill road start. 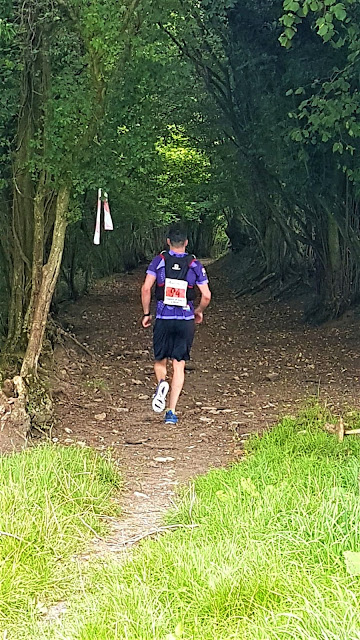 Carl and I were going to run together but I knew my fitness was’nt really up with his at this point in time. I told him he could run on and run his own race but he said he was happy to just plod round and take in the views and expeirences.
We soon came off the road and ran up a path with hedgerows either side. It didn’t take too long until some of us weren’t too sure which way to go but we found some red and white tape on a gate and followed it. We were quite high up and the views of multiple fields were stunning with the mist rolling across and cattle grazing. 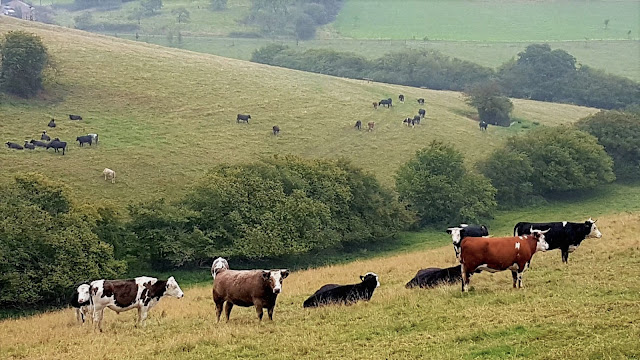 I wrote down a list of place names in case we got lost and they didn’t really help as there weren’t many landmarks. We got lost a bit and the other runners around us were helping with the gpx files given out that they had downloaded. I had it saved on Strava but wasn’t using it yet. Carl and myself met two other runners. We got chatting and ran together for a while. Pete was running slightly faster as was Carl, so I ended up running and chatting to a guy named Tim. We were slightly behind them but kept them in view. Carl and Pete waited for us at the first aid station in South Brewham where we were cheered in by spectators. We ate pizza and drank flat coke. It was then that Carl and I decided to run with our new running buddies as we were running similar paces. After the aid station Carl and Pete pushed on. 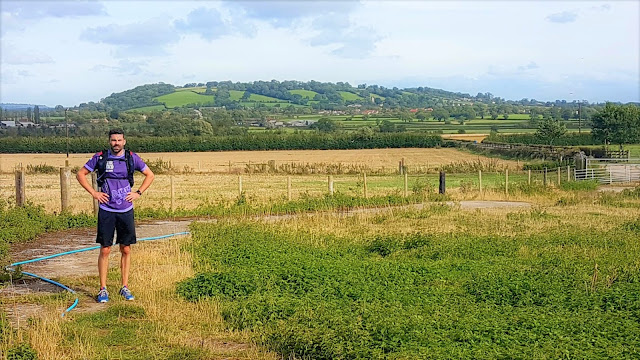 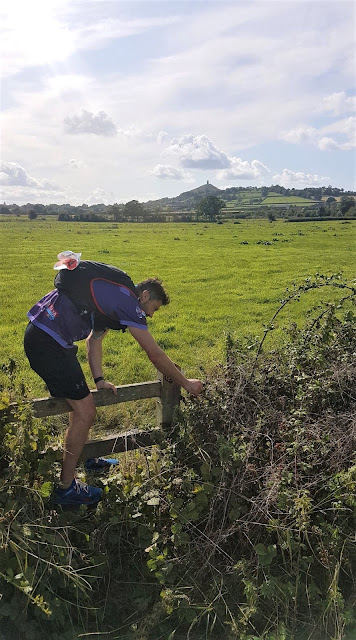 We were road running quite a bit now and I really liked that. Quite a few people had worn trail shoes and wished they hadn’t. We ran through Bruton and not long afterwards the rain poured down upon us. I was getting cold but luckily packed a waterproof jacket. The rain was heavy now and we had followed another runner and now there were four of us who had run the wrong way. One of us found the right way by looking at the Strava map again. We soon met up with other runners who were now overtaking us. We ran through a field and a nice downhill with more great views of the countryside. 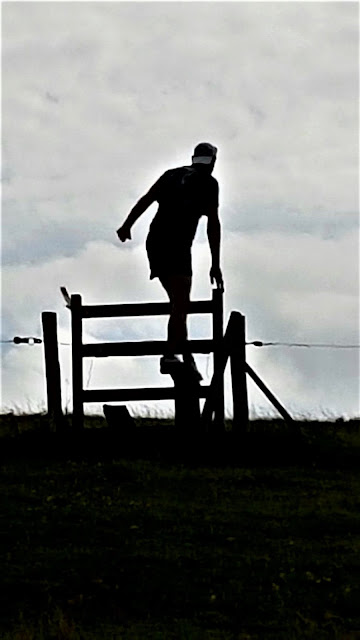 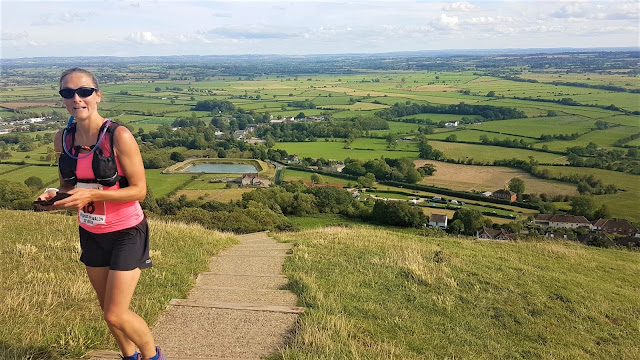 The rain had stopped and we were now getting warm in our coats, so we took them off again. We now had a few feilds where we had to roll under some electric fences. Not easy when you got some miles in your legs but very amusing to watch all the same as each person groaned. We could see other runners running different routes at this point too. We passed some more cattle and then a church and then not long afterwards we ran through a churchyard and were soon at the second aid station in Ditcheat. The support was brilliant again with lots of friendly marshals and other runners all laughing and joking. We ate and drank more, did some stretching and got going again. 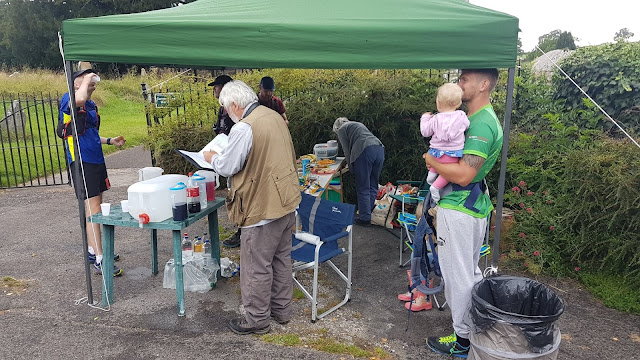 *It’s been a while since we ran this race and I should have written sooner. Some of the details may be scrambled in order but I am trying to remember to the best of my ability. 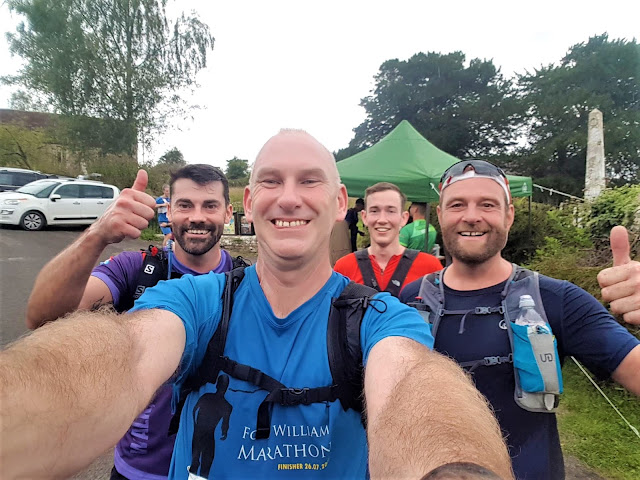 We had got lost a few times but the strava map had helped us when we couldn’t find any red or white tape. This was a fantastic route though with lots of varied terrain and lots to see. I was really looking forward to Glastonbury Tor as I had never been there before. I was still running and chatting to Tim as Carl and Pete were now long gone. I had told Tim that I was going to have a pint of Cider in the Red lion in West Pennard which was our third and final aid station. We got there to more whoops and cheers. They were a very friendly bunch again and we had a good chat while we stretched again. Those legs were sure getting achy now as we had covered over 20 miles now. Sadly, the pub was closed and I had to go on without alcohol for a few more miles. 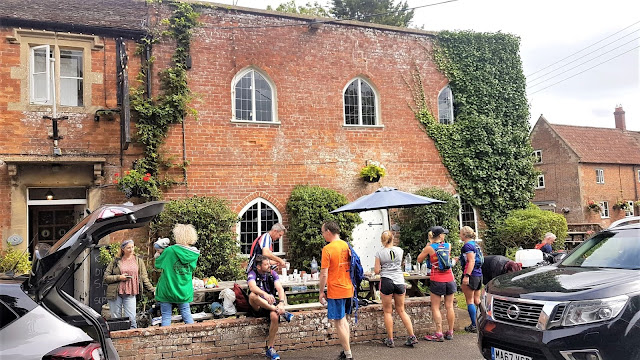 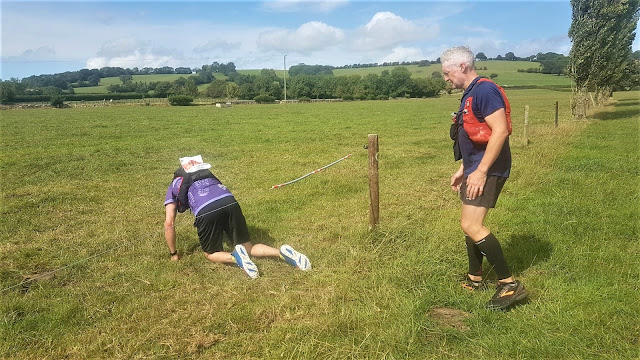 We turned off the main road and Tim wanted to stretch again. We led in a field for a bit stretching various body parts. In the distance we could now see the top of Glastonbury Tor. This got me motivated to get there. It looked quite close but we got lost again and weren’t sure of the route as we stood on a farm. We asked a few people in a village and managed to get back on track. We had a big uphill climb on a road and then saw a women who told us we were going the right way. Not long afterwards we found the entrance to the Tor and began to run towards the steps. We walked the steps and admired the views around us as we ascended. What a view! You can see for miles. I’m glad it stopped raining and now we had wonderful clear views in all directions. We got to the top and took a few pics before the reward of running down the otherside. 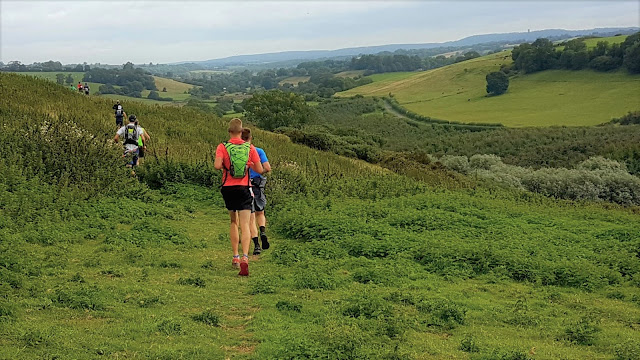 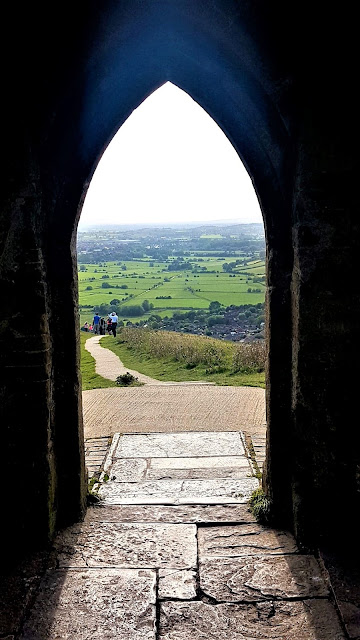 It wasn’t long before we were heading into Glastonbury and down the main high street with various strangers cheering us on with music playing from some buskers. Out through the otherside of town and then into a field where we were cheered into the finish line. Carl and Pete were already there with their beers. Dave was there to congratulate us and give us our lovely medals. The sun was out now too. We were able to sit on the grass and drink a pint of beer and cheer the other runners in. What a great sense of achievement. 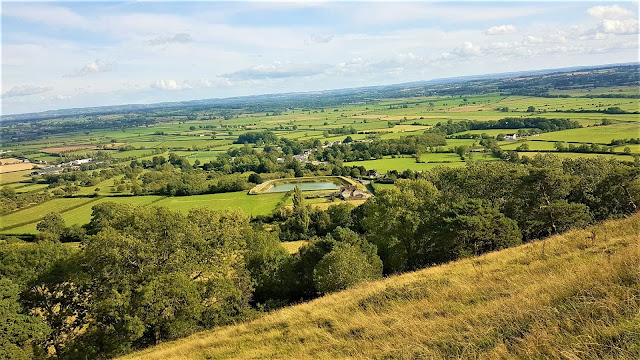 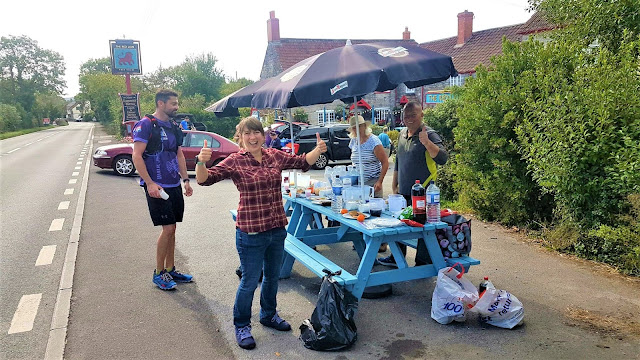 Carl had finished an hour ahead of me! I knew he was a lot fitter. I really enjoyed the day though. May have to do the 50 miler next year ;) A couple of people I spoke to didn’t like the fact that some self navigation was involved. What did you expect for £35! This is a proper ultra set up by a runner for runners, not your £100 50k with big sponsers and big crowds where the proper sense of ultra running gets lost and commercialised. That’s just my view anyway :D 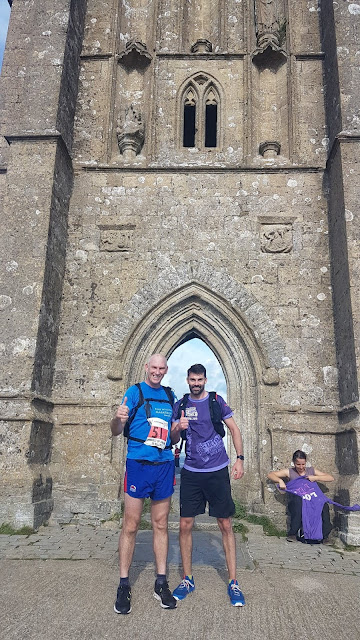 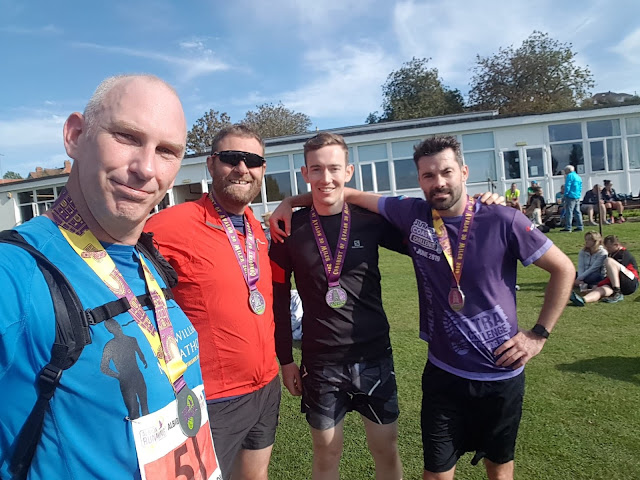 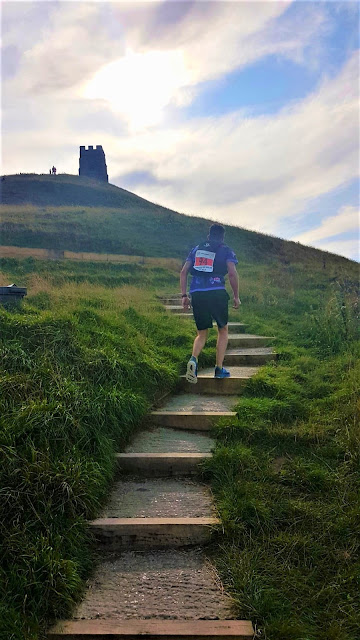 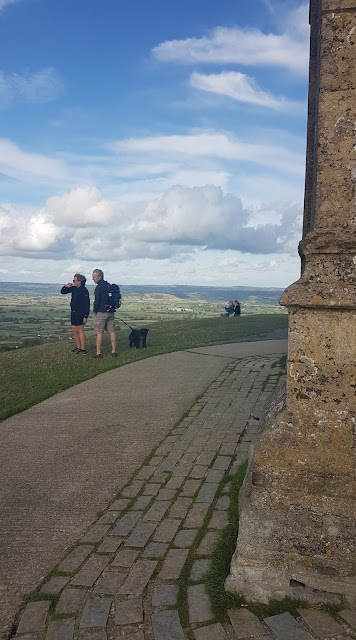