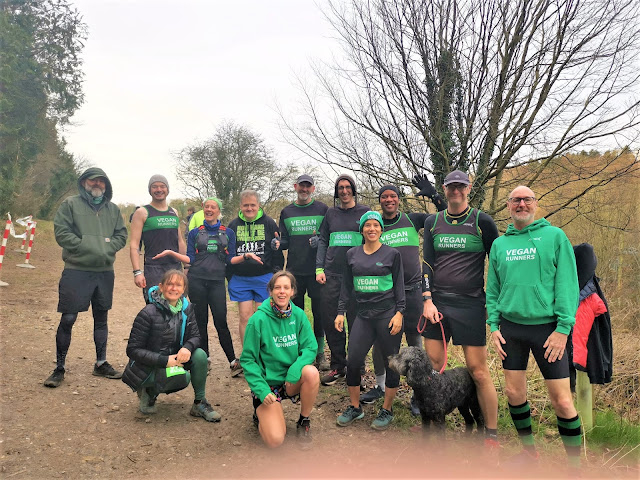 I walked to Sainsburys in Lordshill at 7.30ish and got picked up along with Darren, Alice and David. A van full of happy Vegan runners on our way to another parkrun.... talking about parkrun. "What is you Wilson index?" Do you have a Wilson index or a floating Wilson?" What is your P Index?" "How many Hampshire parkruns do you have left to complete?" etc..

I had done QECP parkrun twice before and knew it was bloody tough. In fact, it turns out to be the 9th toughest parkrun apparently! Now I’m not sure if that is in the U.K or the world? You’ll have to do your own research on that one.

Anyway, I got a PW (Personal worst) there.

It seemed like a good idea… but a few years ago on NYD (New years day), I cycled 26 miles there and tried to run it in road shoes. I was so scared, I thought I was going to die on the downhill. A pair of skis would have been more beneficial that day. Think I got 33 minutes and then cycled 26 miles home in the cold wind and rain but I did get to see parkrun creator that day Paul Sinton-Hewitt. Anything for a bit of parkrun tourism!

The last time I ran QECP was on my birthday last year. It was my idea and I managed to drag along my friends Di and Helen. I had forgotten how hilly it was but at least I had trail shoes and it was nice and dry in September. Obviously, I set a new course pb (Personal best) of 20.57.

Fast forward to the 12/02/22 and we were back. We stood around by John’s van debating on clothing choices. The wind was so cold. I opted to put on a long sleeve shirt under my Vegan runner's t-shirt and put gloves on as well. Others chose hoodies and hats etc..  John was in his VR (vegan runners) vest! Great to see some now familiar faces to me there including Richard, Andy, Matt, Jon etc.. Also some Vegan lovely tourists including Carla and Dudley :)

We walked to the start with a few more VR’s and then we took a group photo. I was juggling with the idea of running home after parkrun, so took my road shoes too. I’m pretty sure I knew the route as well. So, no warm up required, that would be the parkrun and then a gentle adventure home right? We got to the start on the hill and for some unknown reason, when we set off, it felt like I was racing.

We climbed the hill and turned right to a grassy/muddy downhill. I wasn’t crying but my eyes were streaming with water for some reason. It was difficult to foresee my foot placement at such a speed. (It was probably slower that it felt). I had to keep wiping my eyes for visibility.

I felt that I had to slow down a bit at the bottom of the hill as it was muddier, and I didn’t quite feel in control anymore! A right turn and then an undulating path back to the start and finish. Instead of taking the racing line on the inside, I went on the outside as it was an easier track to run with fewer muddy puddles. I had watched a few runners take the inside with unfortunate consequences. They were sliding and tripping over their own feet.

Past the finish line where a group of marshals cheered us on and another right turn back up that big hill. I threw my running cap down on the grass and took my gloves off and put them in my pockets. This time, from the bottom of the hill we ran up again but no right turn halfway up. Just keep heading up. This is so brutal. My lungs were burning. I made the hill distance about 0.80th of a mile. My slowest mile and probably the same for everyone else. Glad I didn’t walk it though, but I did think about it.

Another right turn as I thank the marshal and there just in front are 3 lads running that I have been chasing for a while. This downhill seems more runnable as I blast down. The group of 3 start to disperse as their paces change. I pass one of them and catch another at the bottom of this longer hill. We are now running back to the finish. It’s brutal though.

My lungs are burning, my breathing laboured, the wind is strong, and that last mile isn’t even flat either. There are a couple of noticeable undulations. Jesus! Where’s this finish. I eventually catch up with the other guy who was with the "pack of 3" (mates?)  but I just know that I can’t take him. Not that he looks strong, it’s just that we both seem to be running at our maximum speed at this moment in time. We exchange a few words and encourage each other to dig deep, all the while he is slightly ahead. We passed a few other runners who were slowing too.

Can I beat my course pb of 20.57? Push dude, push! I am close to a sub 6 mile but not really with the 3rd mile being a 6.04. I remember a similar thing happening last time. I just couldn’t get that sub 6 on the final mile.

The runner in front seemed to pull away as we sprinted to the finish. I knew I definitely couldn’t take him. I had no idea on positioning either. I crossed the line at 21.10 and took my token. 13 seconds out! Maybe if I looked at my watch near the end, I would have pushed harder? Saying that, this is the hardest I’ve run this year and it was so painful. My lungs were on fire. I squinted at my finish token and was surprised to get P5.

The guy who had beaten me by 1 second said that I had kept him going and I told him likewise. We really had pushed each other to the finish line. The beauty and the spirit of a parkrun.

I walked back onto the course to hunt down the Green and black shirts and took a few photos of them running in. 15 Vegan runners were scanned in (so I was told) and then we went to the cafe for coffee and John’s amazing brownies that he had made. These even bought Andy out of the warm cafe and into the garden to where we were sat..lol.

I couldn’t stop stroking cute and cuddly jasper’s fur. Jasper is Jon’s dog. (Not to be confused with John or Jhon). Such an adorable dog, even for a cat person like myself.

Alice then told me that my official time was 21.15, so I was 18 seconds out which is a lot really. In my defence though, I think the conditions were tougher than back in September. Was I really going to attempt a 26 mile jog home after running a flat out 5k? Yeah, why not. I left my trail shoes in Matt’s car and put on my road shoes and said my goodbyes.

Well done to everyone who ran and repped in the Green and Black and especially Maria who ran her 50th different location! Sorry to have missed Penny. We’ll see you next time 😃 I haven’t included everyone here, maybe I didn’t get to chat to you or if I did, I forgot to ask you your name. Such a basic thing! Haha. Sorry. x 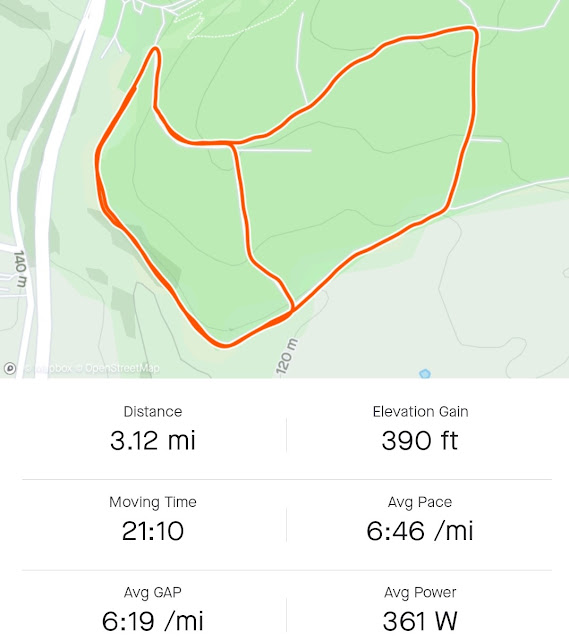