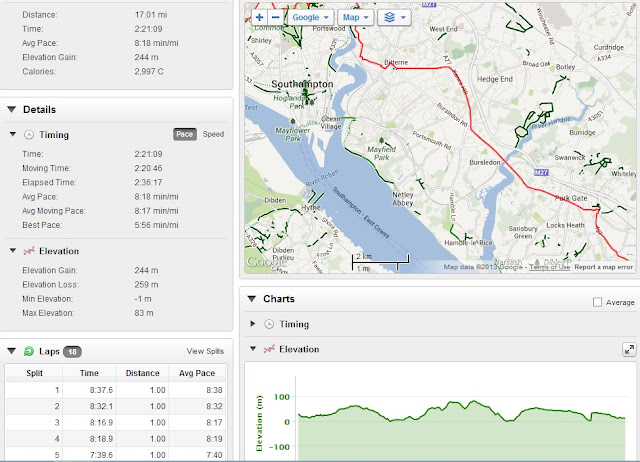 I have had this run in mind for some time but other things always seemed to be happening or me being lazy.
It is very rare that I run over to the East side of Southampton and the furthest I have previously run to is Bitterne, a mere 5-6 miles away. I was hoping to run to Fareham or Portchester castle. I would try and run to Fareham and if I felt good I would run to Portchester which is around the 20 mile mark, only an additional 3 miles from Fareham. These two places both have train stations so that was my way home. I checked google maps for a route that was pretty simple. Mostly the A27 all the way. There are bound to be much nicer routes but I don't know them and didn't want to get lost or run down to dead ends like I usually do and add about another 10 miles to my run.

I packed my rucksack with water, clean socks, shorts, a t-shirt, flapjack and a couple of energy gels. Phone, wallet, keys etc.. Headed off sometime after 10am to make sure that I would miss the rush hour traffic and all the pollution. I was feeling good but wanted to average my miles around the 8.30 mark to ensure that I would actually get there and not burn out.
I chose a more scenic route to Bitterne via the sports centre and the common, then through woodmill. I had now done a 10k and was running up that pretty big hill towards Bitterne precinct. Maybe I wasn't feeling as great as I had first thought! It was now pretty much a straight line to Fareham via the A27 with the exception of the roundabouts. Another big hill next to the Harefield estate and then I reached Thornhill.
Into Bursledon and Lower Swanwick which had some nice downhill and flat. Until I reached Sarisbury green. This was the biggest hill of the day and it was so humid out there. I had to stop at the top of the hill to change t-shirts and drink water and eat something. I was feeling weak already!

After cooling down for 5 mins I resumed my run and felt much better for the rest. Only 12 miles in though. Why was this run so much hard work today? I had been reading a lot of books on Ultra running lately so my efforts today seemed pretty poor to me but now I am happy enough with my achievement and know that I will try this challenge again and run it better.

Onto Parkgate and then Segensworth. I must admit I went a bit mental at Segensworth roundabout and lost it with a driver who accelerated towards me at the lights when I was running across. I swore abuse at him as loud as I could why others stared at my moment of lunacy. I glad he didn't get out of his car cos I was super angry at this point. This was soon forgotten and onto Titchfield I ran.

I got to 15 miles and decided to walk up a hill. How far is Fareham from here? Turns out it was only 2 more miles and I made it okay but didn't feel I had the strength to make it to Portchester castle.
It was a great run and I really enjoyed it. Maybe next time i'll make it Portchester or even Portsmouth!

After those 17 miles I was soaking wet with sweat and walking through Fareham and people staring at me as I staggered about in my sweaty daze. I found a Tesco where my priority was to buy a new t-shirt and get some fruit. £4 for a t-shirt and £2 for some lovely fruit medley thingys. I changed in a park, ate my food and reflected on my run. I love these little adventures of mine. It's great to be alive and feel alive :)
Posted by d3@N j0n3s at 08:44