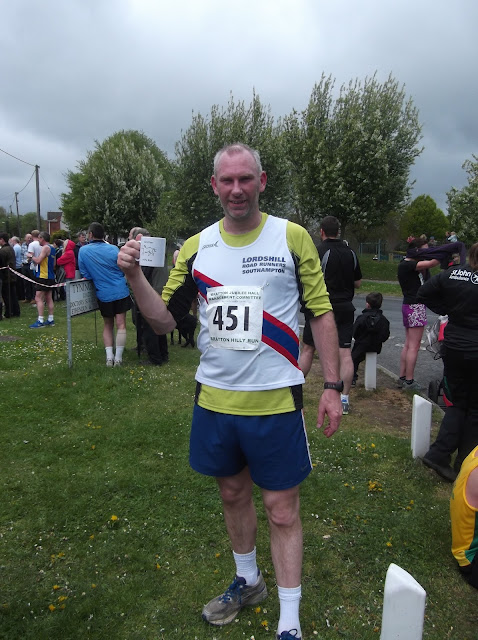 Race fever has hit me once again! I've had a taste of it and I want more. I must do something this weekend. It would be nice to get out of Southampton for a few hours. I'll just check the Runners World events page to see what's going on this weekend.
As I don't drive, I was always going to be limited with public transport so early in the morning and this is almost impossible on Sundays. Need a Saturday race but not too far away.
Bratton hilly run. Sounds interesting and it's on a Saturday morning at 11am and you can enter on the day. Google maps says it's 4.4 miles from Westbury train station. This is looking possible. I research all the travel details from buses to trains and other options etc..
I'm still not sure. It's a £20 train journey and there is no bus from Westbury to Bratton. More expenses on a taxi or a very brisk walk to make the late entries desk in time. To top it off the weather doesn't look great but what else am I going to do this weekend if it's raining anyway?

I pack and prepare, printing maps and making notes. It's time to go, the decision has been made. Only Four stops on the train. Romsey, Salisbury (I try to remember the third stop but can't) and then Westbury.
Westbury train station always reminds me of traveling to Devon or Cornwall. Always stuck at Westbury for an hour or so with nothing to do and waiting for the connection train to arrive.

I decide to walk when I get to Westbury. It's only Ten past Nine and late entry is open until 10.30. 4.4 miles in 1hr 20 mins? Should be fine. I pretty much get lost straight away even with a map! I end up in the city centre and ask the locals for directions. The directions are superb and put my google map to shame. Stupid google maps. This still didn't stop me from walking down a path for half a mile that only led me to someone's front door though.Had to turn back. 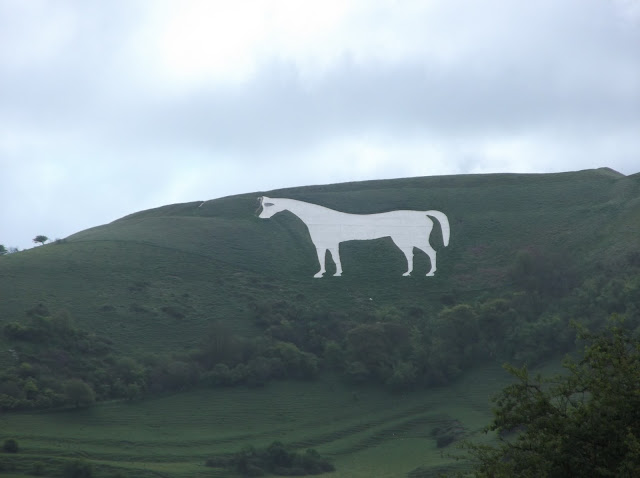 I got to see the White horse of Westbury on the way too. This is the first time I have seen it up close. Usually I would just pass it from far away on the train. An awesome view from the bottom of the hill.
Right Dean Jones, no more photos, got to get to the race and register. I had now run out of pavement though and was running down a narrow busy country lane, dodging the traffic coming in each direction. I get used to this with google maps even though I always select the walking option. A car overtakes but stops in front of me. I go to the passenger window. "Going to the race in Bratton? Want a lift?" Bob and his wife are from Avon Valley running club. Bob is the V50 winner from last year and his wife is the race timer today. Lovely people and they tell me about the race and to watch out for that hill at the start that I read so much about on the Runners world reviews. Not sure I would have made it in time without them but when I got there I had plenty of time. Everyone is so so friendly and welcoming. I get chatting to other runners from other clubs. Avon Valley runners, Dorset Doddlers, Gillingham runners etc.. Everyone warns me about the first hill. "Last year was the first time I made it up that hill without walking you know" says an old man from Fordingbridge who runs for Dorset Doddlers. We warm up together, running back and forth exchanging racing stories. This guy is awesome I thought to myself. 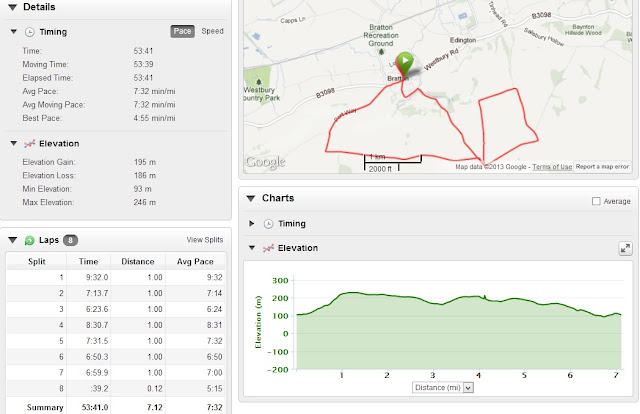 How many times have we heard about hilly races and they haven't been that bad. "Look out for the big hills" and then they aren't actually that bad and have been exaggerated. This was different... I broke at 0.88 of a mile and started to walk. My garmin later showed that this first hill is a mile long and 128 metres in elevation. Once I got to the top I started running again and was able to take in some scenery. The views from the top were amazing and you could see miles and miles of Wiltshire countryside. As only 110 runners took part, there was no congestion whatsoever. I love these races. It started to drizzle but the effects were cooling and much welcomed along with the breeze cooling my perspiring face. It still felt hot.
There was a nice long downhill section but in the distance you could see like a mirror image. So the steep hill we were flying down now, we would running up in a mile or so. I ran as fast as I could down that hill. I was again walking part of the uphill. This was one very challenging race and the drizzle had now turned into a proper downpour and the winds were slightly stronger but I was loving this.

It was mostly views of fields and farms and we were running on gravel tracks. No signs of life out here apart from us runners. Alone with our thoughts, battling on to catch the next runner or trying not to be overtaken from the runner behind. Must push on, want a top 20 finish. Come on Dean. Got to the 10K marker and I was flying past runners downhill. 1K to go! I was enjoying the looks of disappointment as I past my fellow runners. I was going as fast as I could now. Only 0.6 of a mile right? Wrong! I had reached an 11K marker and was slightly confused. The course now went up a steep hill again. I had to walk to get my breath back and then I remembering reading that it's actually an 11.4K race even though it says 11K. Doesn't sound like much does it? The marshals were shouting words of encouragement at the top of the hill. "It's a downhill finish when you reach us" I was past by a runner from Leicester. I dug deep and ran. I stayed with him but didn't have the strength to pass him. I could see the finish and the cheering supporters. This was brilliant. 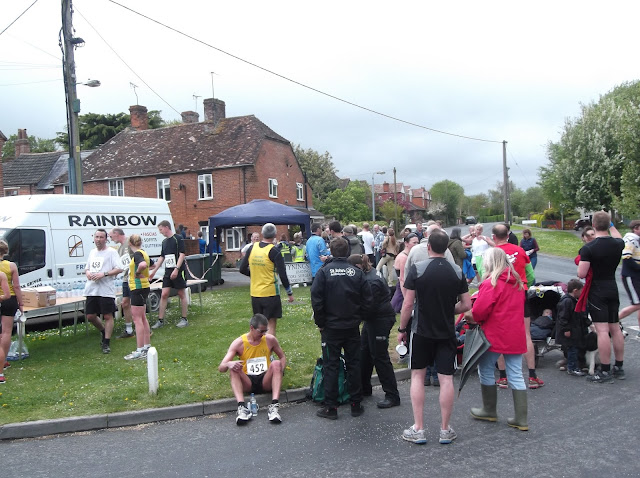 My Official finishing time was 53.43 and I had came 26th. Couldn't be happier with my time and my run. Got chatting to the Avon valley runner who organised the day and thanked him. Got invited to the pub with the other runners after the award ceremony. I was told that the reason that there are so many runners from Birstall running club in Leicester is because they do it every year and it was their massive coach that delayed the start by 10-15 mins. Not that anyone cared. Nice laid back attitude and lots of encouraging friendly people. I can't wait to do this race again next year on the 10th of May. I got a nice mug and a bottle of water at the finish as well. The winner had run it in 41 minutes.

After the pub it was time to walk back to Westbury but via the bridleway and not the main road. Bit safer I reckon. I took the path but it wasn't too long until I got lost again and ended up walking up steep hills again and before I knew it I was above the White horse this time and the views were amazing but the winds were so severe. So I got an even closer look at Wiltshire and the White horse. 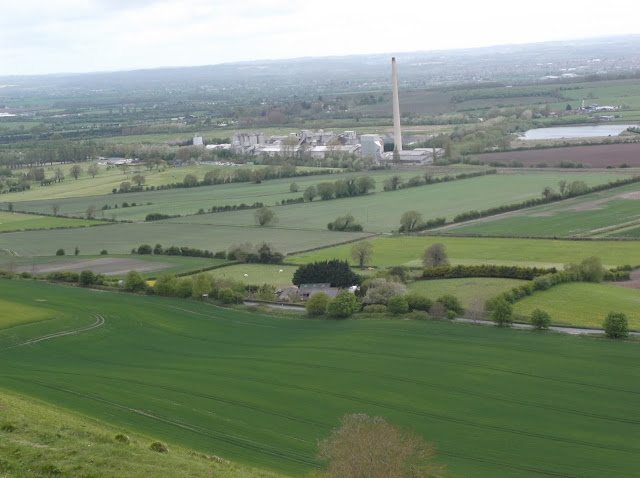 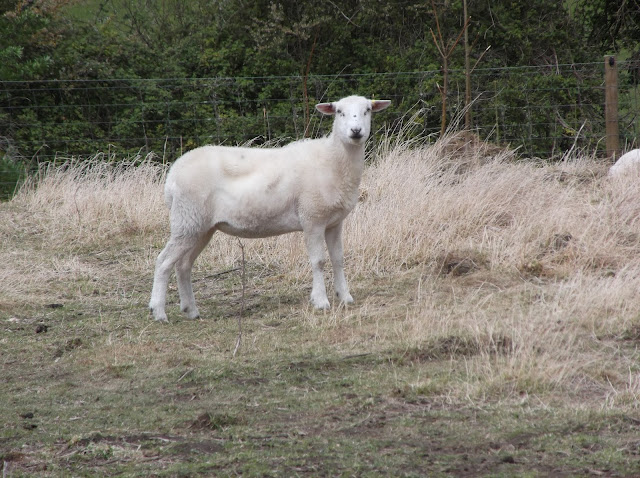 I got to the carpark on top of the White horse. It seemed too dangerous to walk along the paths now as the winds were ferocious, so I decided to take the road back down the hill but then was offered a lift back to Westbury by man in a van with his dog. Hopefully I wasn't going to be murdered. He was a painter and decorator who loved rambling. We exchanged walking stories as his dog Snoopy sat on me and kept on trying to lick my face. What an awesome day. He drove me all the way to the train station as well. And to think I was contemplating staying at home and doing nothing today! 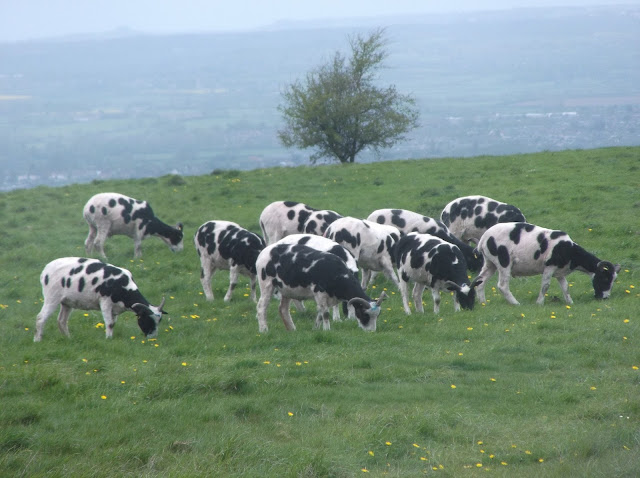