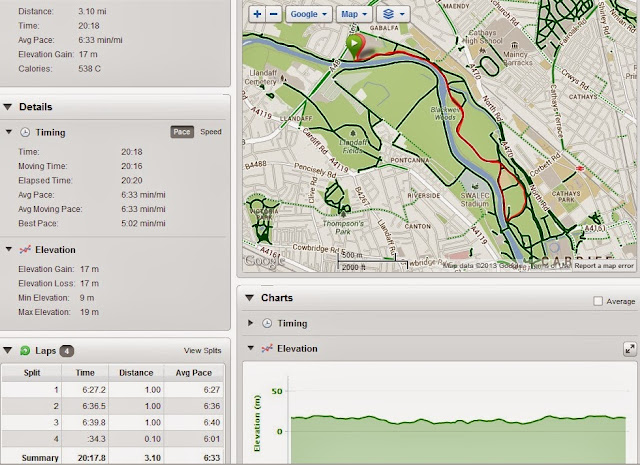 Mikey was on time at 6am on the Saturday morning, which surprised me. All the windows were  open in the car and he apologised for the strong smell of petrol due to some sort of car problem. It was still dark and as we travelled I was wondering if it was ever going to get light again, but of course it did eventually. We had decided to do Cardiff parkrun which starts at 9am. That gave us plenty of time to hit the M4, pay to go across the Japanese bridge and get to Cardiff. We got there somehow, despite the  sat-nav being pretty useless. Getting to Cardiff was fine but finding the park was a little trickier. It's probably pretty easy to find but we are eons away from being the smartest double act in the world. We quizzed other runners who pointed us in the right direction. We parked in the Tesco extra car park which has 3 hours of free parking and a toilet for the parkrunners who were in desperate need, like me and Mikey. Only one cubicle was vacant while the other was out of order. I felt bad that I snaked ahead of him and locked the door quickly denying him access. There were only 15 minutes until the start but we both managed to go in time and run to the start with a few minutes remaining.

The Cardiff parkrun is a 3.1 mile or 5K out and back route with a loop at halfway and it’s run  along a place named “the taff trail”. It’s a nice concrete pavement route shaded by trees and next to a river. Then the course goes into an open park where the loop and point of return is. The sun was shining brightly and the temperature was great for the time of the year. We managed to catch up with Emily Brent from our running club who is also at Cardiff uni. She told us that the start is quite congested for the  first 1 kilometer because of the narrow path and the number of runners. There were nearly 500 runners in previous weeks and there were quite a few 16 minute finshers every week!

Of course with all the chatting we hadn’t started near enough to the front as we should have. We expected a horn to sound like Southampton parkrun but nothing was heard, I guess we should have been  paying attention. This meant that I started my watch late and ended up with a 3 second discrepancy. Oh well, what’s 3 seconds eh? The speech at the beginning was no more than a minute long which I thought was awesome (Southampton take note!)

Me and Mikey raced our way through the crowds. Oh well no PB today, just enjoy the course we thought. But even with this congested start I had still managed to run my first mile in  6 mins and 27 secs! That is a super fast first mile for me. The whole course was feeling like it was on a slight downhill gradient. At first I was chasing Mikey and struggling to keep up with  him, I had now left him behind and decided to try and average 6.30 min/miles for a PB or something close to my 19.56 that I ran 2 years ago or so. Halfway through though I could already feel myself beginning to tire. The legs were fine but the breathing wasn't.  I could feel the excess weight of my stomach. It felt exaggerated and I found it difficult to circulate my breathing due to this. "I;m too fat", I said to myself. "I am going to diet after this weekend, a proper diet. I will get that sub 20 time again!" 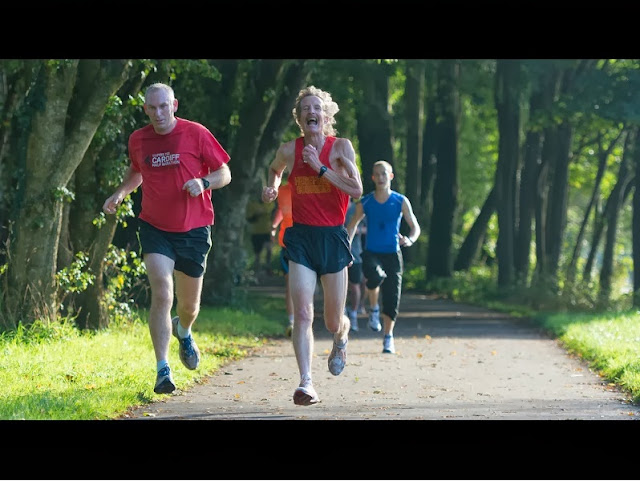 I had finished in 42nd place with a time of 20.21 which was my fastest parkrun time in 18+ months. My watch was showing a 3.1 mile time of 20.18. I was super thrilled and Mikey didn't arrive much later in 60th place with a 21.01. He wasn’t so happy with his time though. Struggling with this parkrun had made me decide that I would not race the Cardiff half the next day and I would not hunt down the 1.30 pacer. I’d run with Mikey and the miles in my legs for an upcoming marathon instead. We both had an 8 item breakfast at Tesco plus a cake for Mikey of course. The place was full of hungry parkrunners and we chatted to a few of them including a Scottish man from St.Andrews who had come down for his 50th parkrun. This then made me wonder where I would do my 50th parkrun (if I ever got there). I was now on 19 runs and Mikey on 29. We discussed where we might do our 50th parkrun and  then off to our hotel in Bridgend we went for a  much needed shower.
Posted by d3@N j0n3s at 13:56