The 2013 Cardiff half Marathon 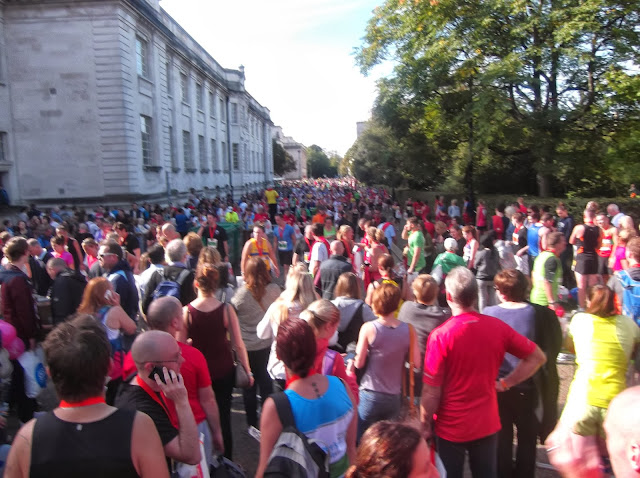 I was woken by my alarm at 6am in a hotel in Bridgend. All I had to do now was wake up Mikey in the room next door, shower, make coffee and put on my race attire. We were on the road for 7am and driving down the M4 towards Cardiff. With 19,000 runners, we thought parking may prove challenging and the roads for the race were closing at 8am as well. The plan was to park and get breakfast. There was a fair bit of traffic but we found an NCP carpark which would end up costing us £18 something and then tried to hunt down somewhere to eat. Time was running out though. I usually eat two hours before a race but we ended up in a waitrose at about 8.15. I had a scotch egg and a pain au chocolat with a lucozade (weird I know) and I think Mikey ate about 6 hot cross buns and 2-3 pain au chocolats with coffee. There was a bit of confusion here as Mikey thought that the race started at 9.30 and I thought it started at 9am. We had to check the guide book and of course I was right. Which meant we were running out of time. We had 15 minutes to get to the baggage area which wasn't too bad but we both needed the toilet pretty desperately. We quickly got changed and headed for the portaloos where we had to queue.

I remember getting in the portaloo at 8.58 and coming out at 8.59. A number two PB for me probably! We then ran to the start and were directed through the castle. We were already running pretty fast just to get to the start on time. We didn't get to the start on time as we missed our "Orange wave" group. We were the runners who were attempting a time of 1.30-1.45. Instead we ended up running near the back of the "Green wave" who were running 1.45-2.00. It was hard to get started with all the slower runners and seemed pointless battling away to overtake such a vast amount of runners. Mikey was trying harder than me and I didn't want to lose him so I did my best to keep up with him. Surprisingly enough we managed to run our first mile in roughly 7.30. We knew there was a 1.45 pacer and we had planned to catch him and overtake him at some point. Mikey had a half marathon PB of around 1.39 so we would try and continue with the 7.30 minute mile as an average pace. 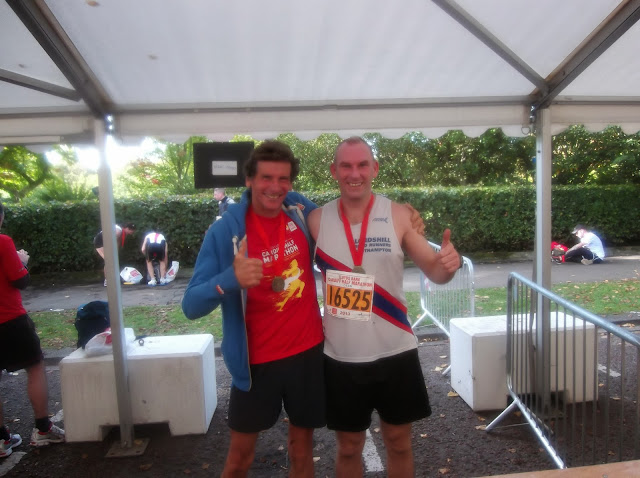 So many people think that the Cardiff half is a fast, flat course but there are undulations. The worst uphill being at mile 12. The course has changed a couple of times over the years and I believe it used to be flat. I had run a PB on this course the previous year though with a 1.31.06. We were asked by some runners what time we were going for and what mile were we at etc.. They were trying to gauge if they should be ahead or behind us I guess. At mile 6, an announcement of our running time came out through a loudspeaker. I checked my watch and worked out that we had started the race Three minutes late! Thank god for chip timing is all I could think.

Other memorable moments were running through Cardiff bay and all the cheering supporters that surrounded us. There was music playing from a loudspeaker which helped motivate me and give me a boost. There was also a band who played to us. We passed a fellow Lordshill runner at about mile 3 but we didn't know who it was. We also passed a speedy Winchester lady at mile 12 and had passed the 1.45 pacer. Things were looking good but I was feeling tired and wasn't chatting as much as I usually did. It actually felt a bit like racing..lol. It felt like there were supporters all the way from mile 12 to the finish. Both sides of the streets were filled with encouraging supporters which gave me goose bumps and made me want to run faster than I actually could.

I sped ahead and crossed the line but Mikey wasn't far behind. My time this year was 1.38.24 and Mikey's time was 1.38.29. It was a half marathon PB for him. Which we didn't know until we got home. I staggered about in a daze collecting my medal, a technical t-shirt. One benefit of being fat is that there wasn't a queue for the XL t-shirts ;) I then got a goody bag as well. Grabbed a banana and a milkshake too. (Even though the milkshake had curdled to Mike's amusement as he watched me spit out a big lump of chocolate). 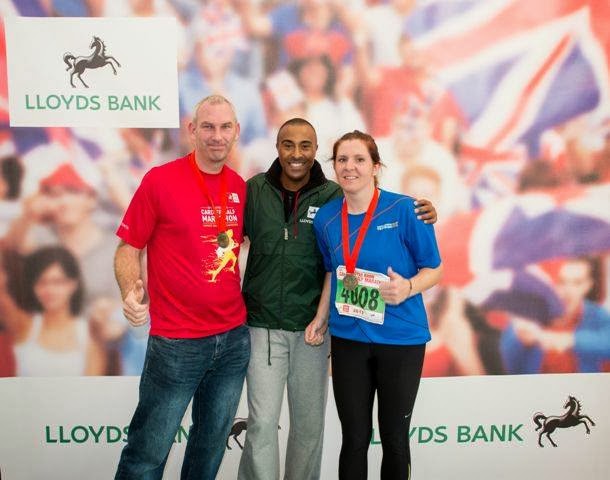 We collected our bags and waited for my cousin Selina (with me and Colin in the above pic) who was also running. She had finished in just over two hours (but not according to her watch to her annoyance). We then thought we'd go and hang out with Colin Jackson and get our photo taken with him before hitting Nandos for some food and conversation about the amazing event. Such a great day and I have now done it two years in a row and would happily do it again. Mikey really enjoyed it and said it was really well organised. We were told that they managed to get 19,000 runners running within 7 minutes. Now that's great organisation! We went home very tired but very happy and after the race I had made it to 999 miles of running for the year. This was also my 40th race in the 3+ years when I started running and became an addict.