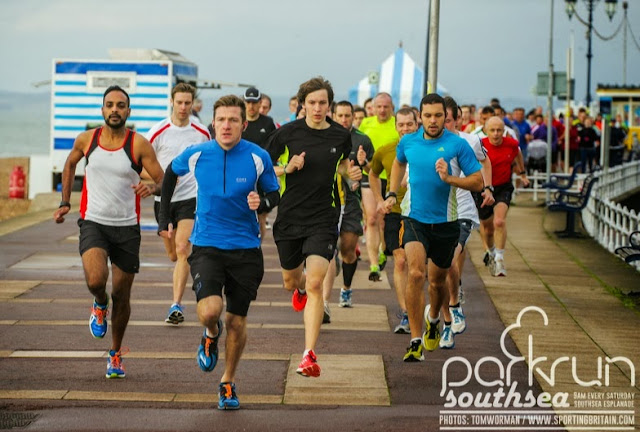 I got up at 6am and it was still dark. I couldn't see the wind or rain but I could certainly hear it. Do I really want to make all this effort for a parkrun I thought? I had breakfast and drank my coffee which gave me more time to ponder over this question. I really wanted to do Winchester parkrun but they were doing a "naked running" parkrun thing. I felt like racing today and getting myself a good time. I had only been on a diet for a week but was feeling fitter and lighter already and the 20.21 I got at Cardiff parkrun the previous week had really gave me some confidence.

I walked from my house into Shirley and got a bus to the train station and it was still dark but it was only raining lightly and the winds had died down. Things were improving! I got the train at 7.13 and had to change at Fareham but I was in Portsmouth by 8.15. It's quite a way from the train station and took me about 25 minutes to walk. Which was a good warm up for the legs. The parkrun starts near the Southsea pyramids centre which is pretty much where the Great south run starts. Although it is actually closer to the start of the Portsmouth coastal marathon which is behind the centre. There is a massive shelter where people gather under and it's also ideal to leave your bag there as I was worried my i-pod and phone would get wet but that didn't matter because by now the sun was out and shining brightly over the sea. It was a beautiful sight to see so early in the morning. 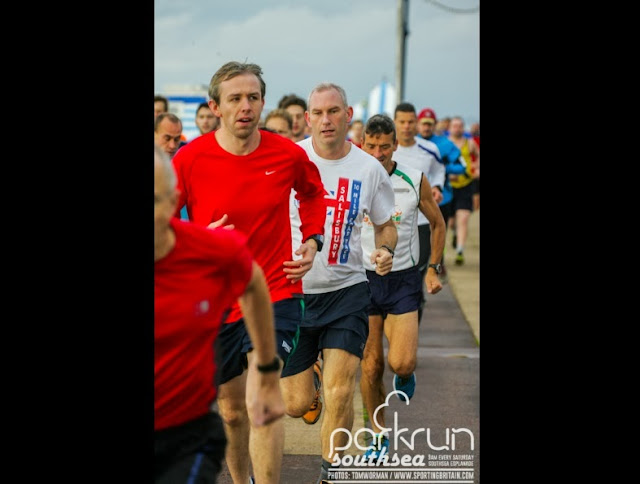 We were briefed on the course and told to make our way to the start line. This was only the 2nd ever Southsea parkrun and there were already over 100 runners. At the start line I saw a familiar face that was Danny White from our running club. I managed to get in a quick greeting and then we were off.
You basically ran along the seafront towards the south pier and when you got half way you went around a cone and came back. This may sound boring but it isn't. It's fast and flat. On the way out the wind was against us and all I could hear was the wind in my ears. To my right was the wonderful sight on the sun glowing over the water. There were very few pedestrians on course which was also great. Despite the wind I was still able to run my first mile in 6 minutes and 27 seconds (and the same for the second mile). As soon as I rounded the cone and was on my way back there was silence. I no longer had the sound of the wind in my ears. The wind was now behind me I guess. This doesn't mean that running became easier though. I was now panting hard and it felt like I had sold my soul to the running devil for this parkrun. I had to dig deep and it felt like I was slowing down, but I wasn't. My garmin told me that I had run 3.12 miles in 19 minutes and 58 seconds! That's my fastest 5K in 3 years. I was so happy with the time and then spoke to Danny and found out that he had won in a time on 17 minutes and 35 seconds. I had came 17th which was a brilliant achievement for me. 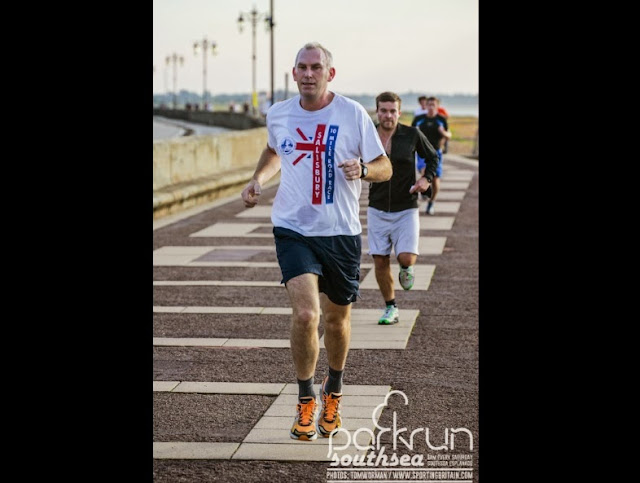 Those doubts I had in the morning whether it was worth the hassle to make this journey to parkrun were now eradicated. I spent the rest of the day so happy and wanted to tell the world that I had gone sub 20  and only for the 2nd time. I think I was more excited about this than anything else that I had achieved so far this year. I later found out that my official time was 19 minutes and 59 seconds. Just sub 20, but sub 20 all the same ;)
Posted by d3@N j0n3s at 11:34