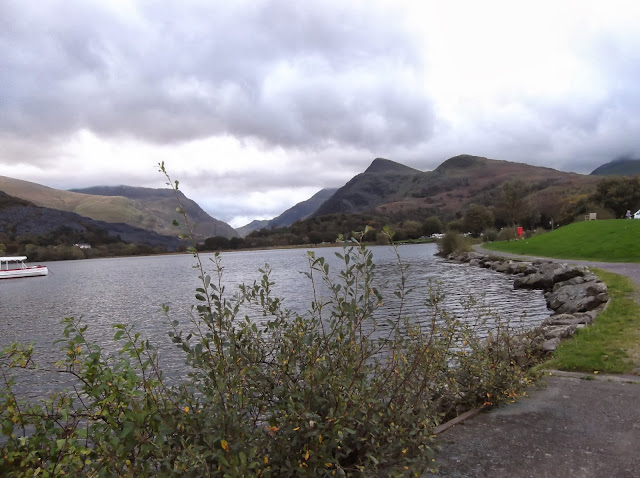 I was picked up by the Mattinglys and Lawrence. We left Southampton Friday morning and arrived in Llanberis to pick up our race numbers and t-shirts sometime in the late evening due to the long journey and traffic congestion. It was a long day but we had a nice lunch at the Spread eagle pub in Gailey just after the M6 toll. We met Terry Prynn and Derek Goodchild there and asked a few questions about the marathon as Derek had finished it 15 times already and would be running it for the 16th time! We had all entered this marathon some time ago and I hadn't really looked into the race until a couple of weeks before we were going. I went on the website and made a few discoveries: This was supposedly the toughest marathon in Britain and there were some steep climbs. 1100ft at the start and another 1200ft at mile 22. I was feeling a bit overwhelmed and a little scared if I am honest. I wasn't really marathon fit and had recently pulled out of the New Forest marathon due to an achilles injury. I certainly wasn't going to race this. I thought i'd be lucky just to finish.

We got to our hotel in Caernerfon and checked in, then it was time for food and a couple of beers, followed by an early night. I hardly slept as it was very warm and I was quite nervous about getting around this marathon. We had breakfast early and went back to Llanberis for the start of the race. It was trying to rain but held off despite the grey skies and the wind wasn't too bad either. Perfect conditions really. The race was to start at 10.30 and the heavy downpour was predicted for 3pm. At least we'd have a dry start! 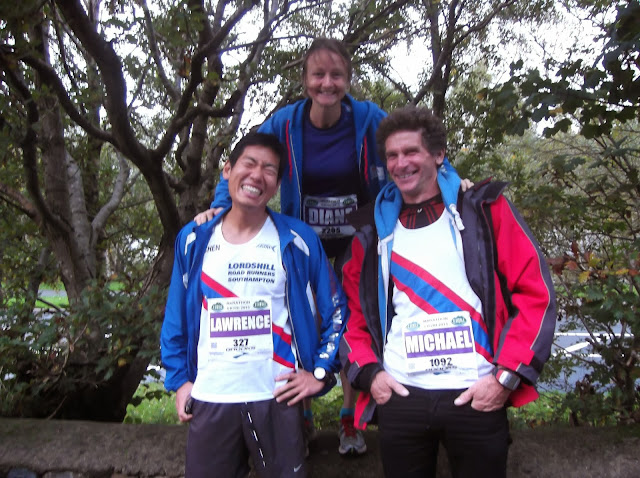 The race started and nearly 2500 people shuffled forward. We were off! Lawrence was storming off ahead and Mike and Di were right next to me. Mike then seemed to pick up the pace but I ran with Di. Di was running our annual 10 mile race in a week's time so was only running 12 miles of the marathon and was then going to DNF herself to save her legs for the vital Hampshire Road Race League event. We seemed to be climbing straight away and this would last for about 3 miles. This was challenging at the start of the race as our breathing became heavy but the scenery was amazing with streams flowing down from the rocks and slate all around us. There were also T.V cameras filming so we couldn't walk but Di did offer a lady £50 for her bike halfway up the hill. The other great thing was that you could see so far into the distance in front and behind you. When we reached the top of the hill there was a long but not too steep downhill. This was mine and Di's favourite part of the race as we cruised down and Di pointed out that we were running a sub 7 minute mile which is something I have never done in a marathon before.

The road still continued to slope downwards but at 6 miles we were now running on slate. I found this tough as I was being very careful with my footing as I didn't want to sprain an ankle and the wind was making my eyes water as well but Di was loving this part and flew off ahead and took me awhile to catch her again. The first 10 miles had vanished in hardly anytime at all. This was such a good marathon. All my fears had now disappeared and I was loving this. It was soon time for Di to quit the race at mile 12 where Terry would be waiting for her with the car. We spoke to many other runners and they told us that it would get tougher after 13 miles with another hill approaching. Di had decided to carry on running despite being told this. We were both having a great time and spent most of the time joking and laughing except for when the guy tripped over a cat's eye in the middle of the road. 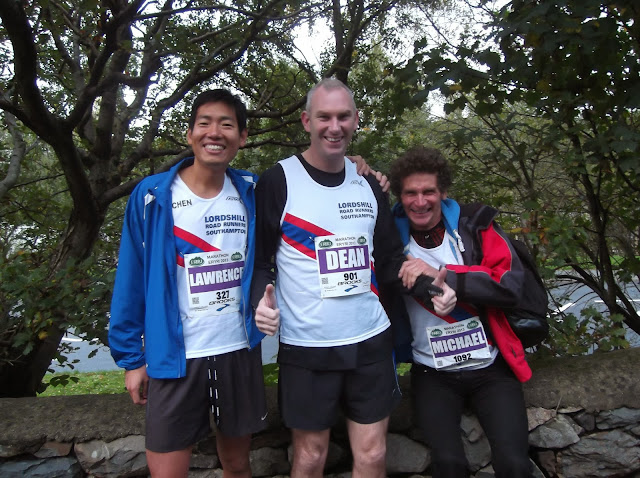 The second hill wasn't as steep as the first and was just a gradual climb. We knew this as Derek had told us about it. We seemed to get on okay and I made a prediction that we would catch up with Mikey at mile 18 as we were running well and running lots of sub 9's. I was wrong but we did see him and 19.5 miles and he was heading off course for a wee. My legs were feeling pretty tired at this point but they had now found renewed vigour. As Mikey went off course I sped up to overtake so that he wouldn't see me and Di was kinda doing the same thing apart from she couldn't stop laughing. As you can see we were really taking this race seriously!

Mikey finally caught up around mile 21-ish but decided to walk again. We had forgotten that he was trying out a run/walk technique that he had read about but he said that it probably wasn't working too well because of all the hills. We left him behind and carried on chatting to strangers and Di likes to give everyone abuse. I think she actually out-chatted me and that's an achievement in itself! She kept us thinking about positivity and we weren't allowed any negative thoughts. I told her that I was being held hostage in my own head and this wasn't fair but I stayed positive anyway ;) It was hard not to with all the great support from the crowds and the marshals on the course. 22 miles in and we had now hit the biggest hill on the course. I had had 3 energy gels and 2 slices of orange. My hands were very sticky so the next water station would be for my hands. There were plenty of water stations and most of them were giving out free "High 5" gels with a different flavour at each station. 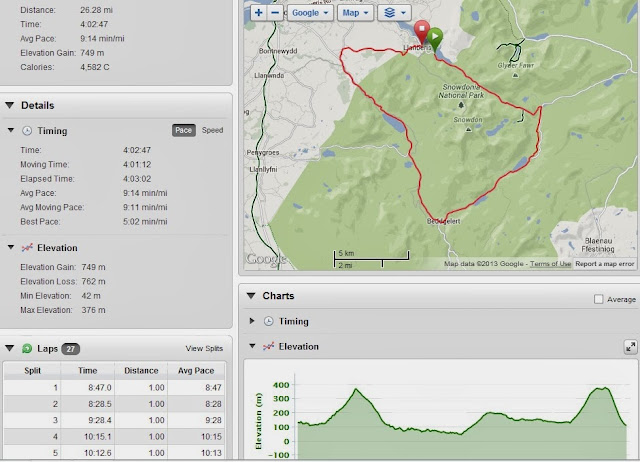 Our race numbers had our names on which was also great for support. People were calling our names out with added encouragement. For the first time me and Di had decided to walk for a bit. This was a steep climb. 23 miles in and I bump into an old friend from Southampton that I haven't seen for about 15 years! Weird, but great to see him and chat. When we got to the apex it was tough to start running again as my hamstrings had seized up and I noticed that this wasn't just happening to me. It took a while to get the legs warm again but I did. There was a pretty strong wind coming from the East now and running was a little tougher but I was happy to run through some of the puddles just to cool my feet down.

Not long to go now! Most of the course is on road but now we were going to be back on the flint and grass. This last section was downhill. It's started gradually but by mile 25 it was very steep and impossible to run down. You had to slow yourself down. This would obviously awaken the quads. I had now left Di as we didn't have far to go and really wanted to pass two girls for good who had passed me a few times previously. I started by leaning back as far as I could when I was running but the descent got steeper. I then tried a sort of fell running technique where you run down the descent sideways. This seemed to work much better and gave me more control but as soon as the hill started to mellow out again I began to sprint. Yes - Sprint! I was sprinting at the end of a marathon. Managed to run my last mile in a sub 8 and was flying to the finish. This was the best I had ever paced myself. I had finished with a time of 4hrs and 2mins. Lawrence had already finished with an incredible 3hrs 30. Di was only 2 minutes behind me with a 4hrs and 4 mins. Mikey was 4hrs and 15 mins and Derek was done in 5hrs and 16mins, This was also Derek's 102nd marathon! An incredible man and a great inspiration to all. 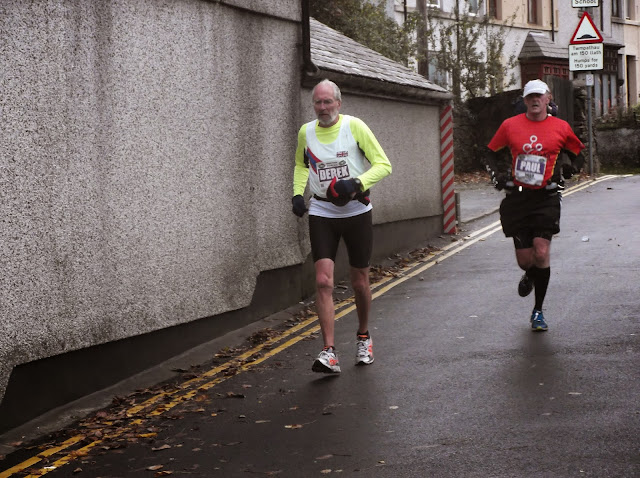 We picked up a Welsh slate/coaster at the finish grabbed a free tea/coffee or squash and then the rain started to pour down. We had been lucky. It was then back to the hotel for a shower and off to the pub for a drinking session and some food. What an amazing weekend. I would love to do this marathon again next week if I could. I guess i'll have to wait until next October.