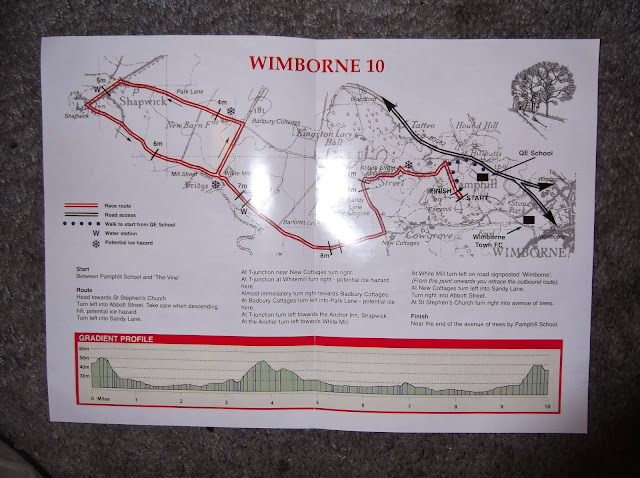 As I had done Gosport half two years in a row I thought I would give my number to Mike Bisson and enter the Wimborne 10 instead, which seems to clash with the Gosport HRRL every year. I was told about this race initially by Rob Kelly and convinced to do it even more by Pete Lewis after chatting about it at our own 10 mile race. I was lucky to get my entry in just before the race had reached it capacity.

Pete picked me and Kathy up in the morning and although it was not raining, it was quite cold. Rob Kelly was supposed to be running but was currently injured. We arrived with plenty of time but there is a nice long 10-15 minute walk to the start/finish line. We spoke to many of the other runners, including the American lady who had finished last at our 10 mile race only two weeks ago. We were glad to hear that she had enjoyed it and praised us for the friendly support which she received. We waited until around 10.20 to take our bags to the baggage tent, due to the cold weather but after that we managed a couple of warm up runs before the race was to start at 10.30.

I had looked at the results from the previous year and I thought this would be a good indication of where I should position myself at the start. So, I would start about a third of the way back. As we waited, we were given instructions and warned that the Muskets and pistols would soon be fired and that would be our cue to start running. The man announced "If anyone here has a dog, keep hold of it" This received  a roar of laughter from us runners. The guns went bang and off we ran, but slowly.. 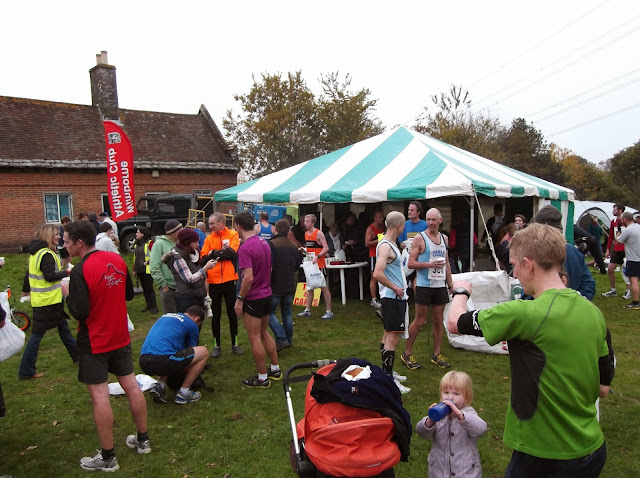 This race isn't chip timed and a lot of the slower runners are quite happy to start at the front so this means that the first part of the course can be quite congested. I even had to slow down behind people running down a nice steep hill! But then again, I had somehow managed to run my first mile 6 mins and 10 secs. I don't even run a mile that fast at parkrun!

After the first mile there was plenty of open road and the runners were now nicely spread out. I still seemed to be running as if this was a parkrun and not a 10 mile race. I wanted to achieve a sub 70 minute finish today but I had been warned about the hill at mile 9. Many people had told me to "Save something for the last climb". I was saving nothing though, this was racing after all and today I was feeling good :) Pete had referred to the hill as similar to that of Toothill. One of our local biggish hills that we sometimes trained on.

Despite the 6.10 first mile and the 6.28 second mile I still wanted all my miles to be under 7 minutes but that didn't happen as I reached mile 5 and hit a 7.04. It didn't matter though, I was going strong even though I felt like I hadn't been able to breathe properly since the start. I had noticed that a few women were overtaking me now and this had caused me some concern until I had found out it was currently the third woman who had just passed me. I got my own back though as I told the fourth woman who overtook me that she was fourth and the third lady was up ahead. I was still overtaking men but not women! It was quite exciting to be among the fast women and being able to see them race against one another. I didn't bother telling the fifth woman that she was fifth. I had had enough and decided to overtake her instead..lol. 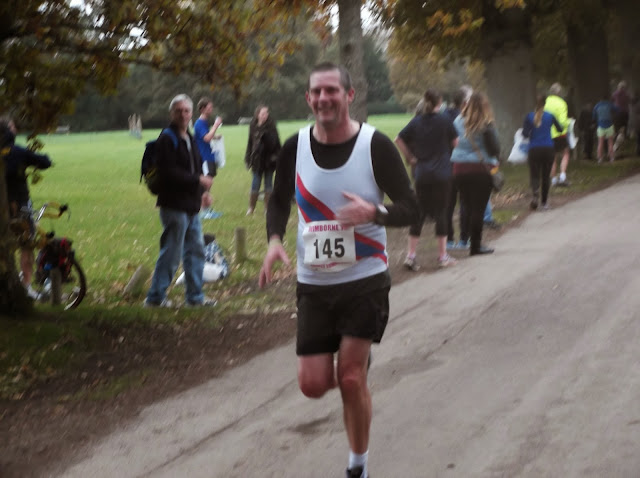 Then I saw and heard the amazing Morris dancers. This created such a great atmosphere. Loud music was playing and everyone was cheering in the streets. This always encourages me to run faster and clear any negativities than may have been going on in my mind. I had run my fastest 5 miles in a time of 33 mins and 2 secs and my fastest 10K in a time of 41.08. I was flying, but still knew that the hill would be tough at mile 9.  At mile 8, I had thought to myself that even if I run two miles in 7.30's I should still get a time of 1.08. Not far away from my 1.07.57 PB from the Salisbury 10 that I got in March. I was getting tired though and wasn't sure if I was making much sense with my time predictions. I had hit the 9 mile mark in just over an hour and then came the hill. I told the Marshall half-jokingly that I was on for a PB until I had hit this hill. The PB potential had gone, or so I had thought. I ran as hard as I could along the finishing straight and there were signs that informed me that there were "400 metres to go" and then I could see the giant clock ticking away. I want to get across the finish before 1.08 and I had just made it in 1.07.59. I was really happy with this time and so close to a PB by 2 secs. 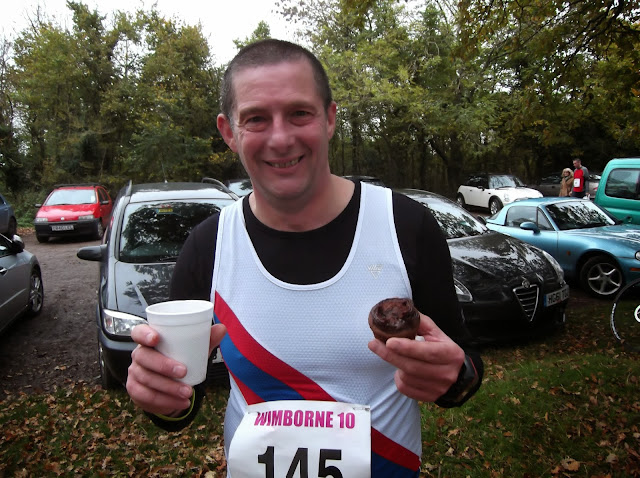 I was over the moon and had surprised myself with how well I had run. There was free tea/coffee and soooo much cake to choose from but was sweating so much and feeling sick with my effort, so I jsut decided to head back to the finish line and cheer in the other runners while I waited for Pete and Kathy. In they came and then we went for free coffee and cake. You could go as many times as you liked as well. There was so much variety of cake! Kathy looked like she was going to pass out at the finish as she was all dizzy. Turns out she got a PB by about 3 minutes! 137.55 was her time. Peter did it in: 127.16 and when I got home and checked my garmin I had actually done it in 106.59 and the official results confirmed this, so it was a PB after all! One of 57 seconds. I was even happier. Another great event and a wonderful day. A big thanks to Pete and Kathy for making it even better. 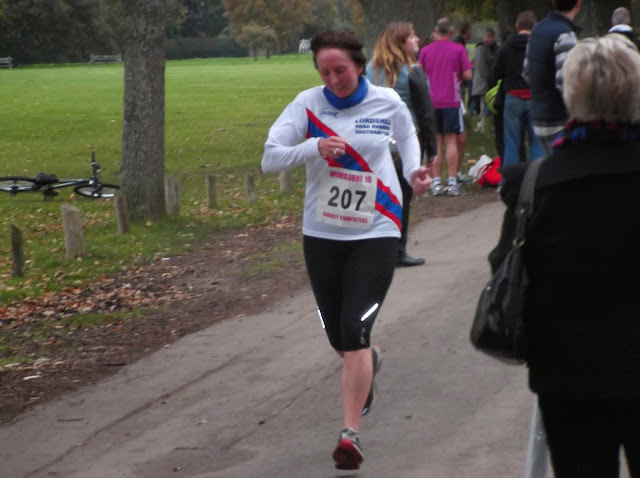 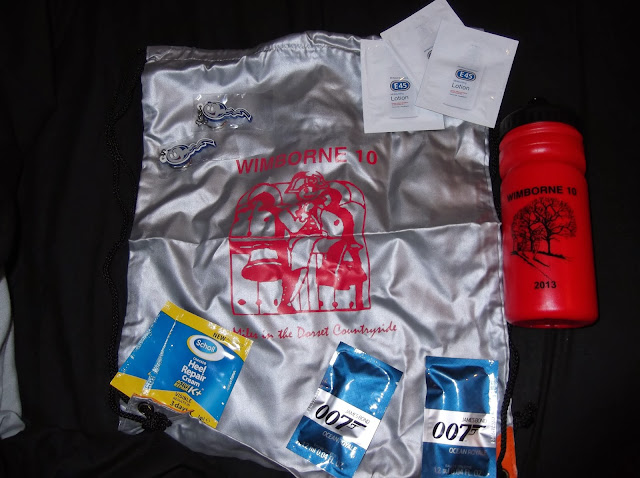