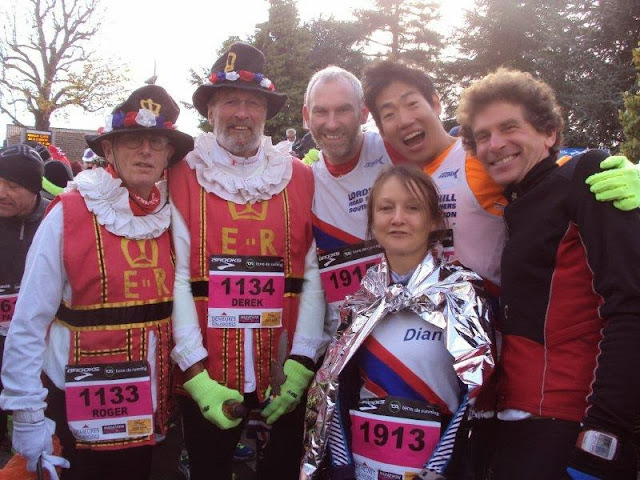 (Photo: At the start. Thanks to Roger Bradley for this pic)

Okay so it seemed crazy to travel 600 miles each way to run a marathon but we were crazy enough to go ahead and do it anyway! It was me, Lawrence Chen, Di and Mike Mattingly. We also met Derek and Roger there who were travelling from Turin.
There was heavy snow on the way to Lyon and the snow had laid on the hills where we were staying. We stayed in a Gite in the middle of nowhere thanks to Larry but it was awesome there high in the isolated hills with breathtaking scenery. I was pretty nervous and had a couple of panic attacks here and there and I knew this would happen but you can't live without fighting fear all your life can you? And the attacks don't last forever,  unlike the great memories of this weekend. We had collected our race numbers, goodie bags, t-shirts the night before from the expo in Villefranche sur-saone.

Villefranche sur-saone was also the finish of the race. We had to return on race day to get a 45 minute coach ride to the start. It was then that I knew I was taking this marathon too seriously when lots of Santas got onto our coach, followed by some dudes in stripey prison outfits. I, of course had to sit next to Chen who rustled through his noisy bag for 45 minutes.
When we got off the coach, we were handed tumblers of Beaujolais straight away. Bit of a weird marathon warm up but it was about 1 degrees. We walked through an archway of people holding up flags of countries around the world. They reported they had 57 different nationalities running today. Not only was there a marathon, there was also and half marathon and a 10k race going on as well. The organisation of this race was phenomenal with 8500 runners in total. They also reported that there were 850 supporters. So this wasn't exactly a small race and next year would be the tenth anniversary. 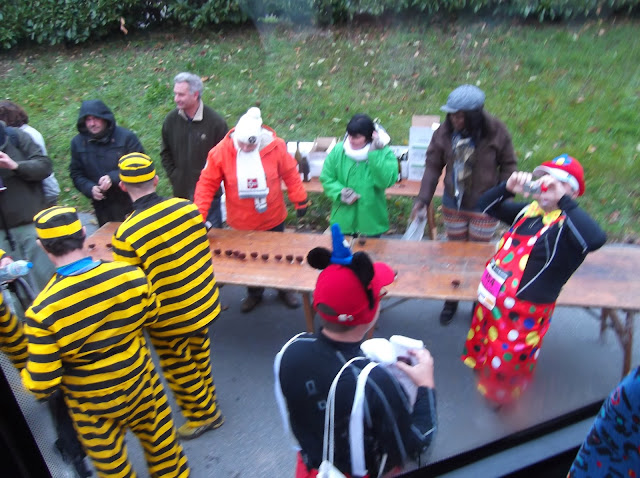 (Photo: Taken from the coach on our arrival to the start. P.S Mickey mouse was a tosser and held up all the traffic when I was running next to him).

At the start we danced to music to keep warm and then held a one minute silence for some people who had passed away. I was feeling quite emotional at this point even though I didn't know the deceased. I thought about their lives and their friends and family and their premature end. Anyway, we started to shuffle forward. The race was quite congested at the start and it took a while to get any pace despite the downhill start. It was tricky to overtake and watching Lawrence get frustrated at this, made me laugh and relax a little. 5k in and I was ready for a toilet break. I knew the wine at the start was a bad idea! People were urinating everywhere. I must have seen about 20 people urinating during the first mile.

Then, the craziness began. I had already forgot to mention all the costumes the runners were wearing. I hear someone shouting "Go England Go". I turn around and i'm greeted by a Frenchman dressed as an Ostrich. Even his Ostrich had running shoes on and his mate was running the marathon in Hawaiian style clothing and a big surfboard under his arm. Did I mention it was 1 degrees?
We passed many vineyards and we came to a wine cellar which we had to run through the grounds, down the stairs and into the cellar where there was music playing and a display of food and drink. Wine or water, Meat or cheese, or all of it. I took the water and slipped up the stairs of the cellar on the way out. I was 10k in and my legs were feeling like I had run 20 miles already. It'll probably pass I remember thinking. I kept on running and tried to keep the positive thoughts going which was aided by the roaring crowds. There was so much to take in on this run that it all felt a bit surreal. The locals were out cheering everyone on. "Allez, Allez" they would shout. I used my very limited vocabulary of "Bonjour" and "Merci" over and over and was developing a great accent with these two words. 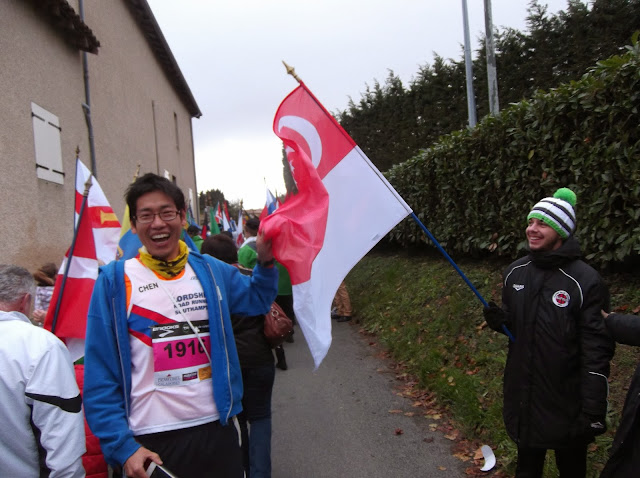 (Photo: Larry was so excited to see his Singaporean flag. This flag was only here because of his entry! That's some welcome).

I managed to catch up with the Ostrich man around mile 20. He was still dancing for the crowds and shouting stuff while lively music blared out from a massive lorry. He had warned me that there was a big hill coming up. I was in bad form and shuffling. I had a weird lean to the right as if I looked injured but I wasn't. I was just so tired. I tried to eat lots of food at a previous station. I got some meat, cheese and banana and just squashed it up into a ball in my fist and put it in my mouth. I was struggling to eat this strange concoction and just ended up choking on it while some young French girls stood there laughing at the stupid Englishman. Must have looked pretty funny I guess. I felt in desperate need of Glucose/sugar but could only find water. Later came another mistake of downing what I thought was coca-cola but it turned out to be hot coffee which scolded the throat a little. I definitely learnt a few things from this marathon but i'm not sure what.

Somehow I made it up the hill and there was a downhill not long afterwards. I saw a fellow runner who was holding on his race number with only one safety pin and it was quite windy at this point so I ran alongside him and gave him one of my safety pins. He smiled, thanked me and I pushed ahead now holding the corner of my race number.
I had struggled to do 8 and a half minute miles from the start but the last 5k I was able to open up my stride a little due to the downhill. Running my fastest mile at mile 24 and recovering some sort of running form, I knew I would be behind my 3.39 PB and was hoping for 8 minute miles to get me a time of 3.30 but it just never happened. I finished in a time of 3.43 though and it was my first marathon without walking at all. I put my all into that finish. Running through some weird townhall building and into a market with cheering kids "Allez, Allez". There were a few other buildings to run through as well as the vineyards and running up and down steps. 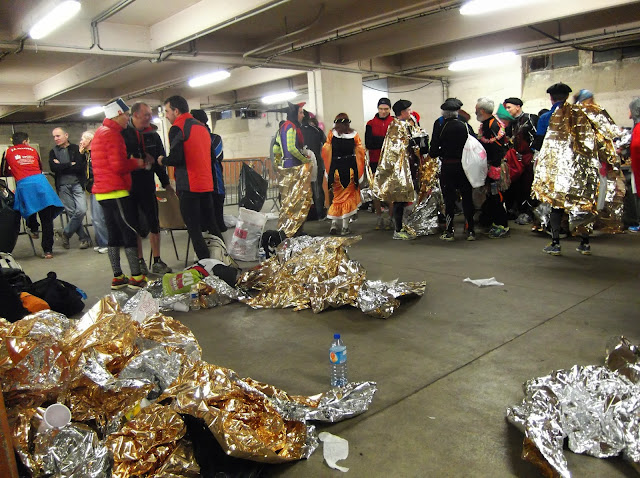 (Photo: An underground car park that was the baggage area and free refreshments for all)

I had crossed the line pretty dizzily when I was dragged to one side. "Dean, yes?" Before I knew it, I was talking to the crowd through a microphone. Damn, that thing was loud too. I was being asked questions and trying to answer them without dribbling too much or slurring. My words then got translated into French. I remember saying "Amazing" a lot and saying i'd return. I was a minor celebrity. After my interview and the tv cameras I was approached by many French people congratulating me and asking me about my experience. And what an experience it had been.

I had picked up my bottle of Beaujolais and a "wine tasting" medal at the finish. I went to collect my bag to keep warm and there was yet more free mulled wine and cheese. Larry had somehow got a PB on this course despite the hectic start and also got interviewed. Mike and Di didn't finish that far behind me and Derek had to look after Roger who kept on falling over and knocking people's things over. We had all finished and that's all that had mattered. This was an "amazing" experience and if I did it again it would be in fancy dress and with more wine stops and banter. 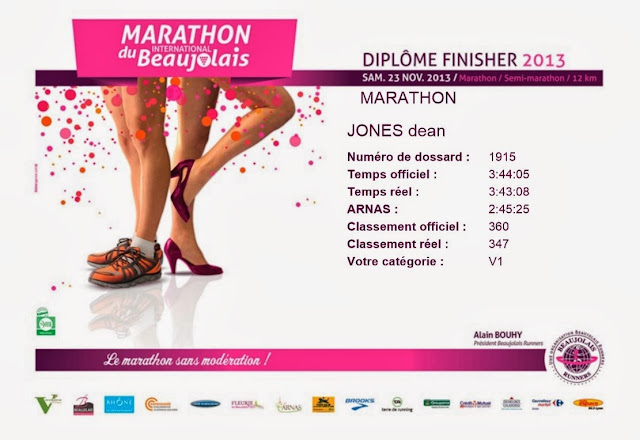