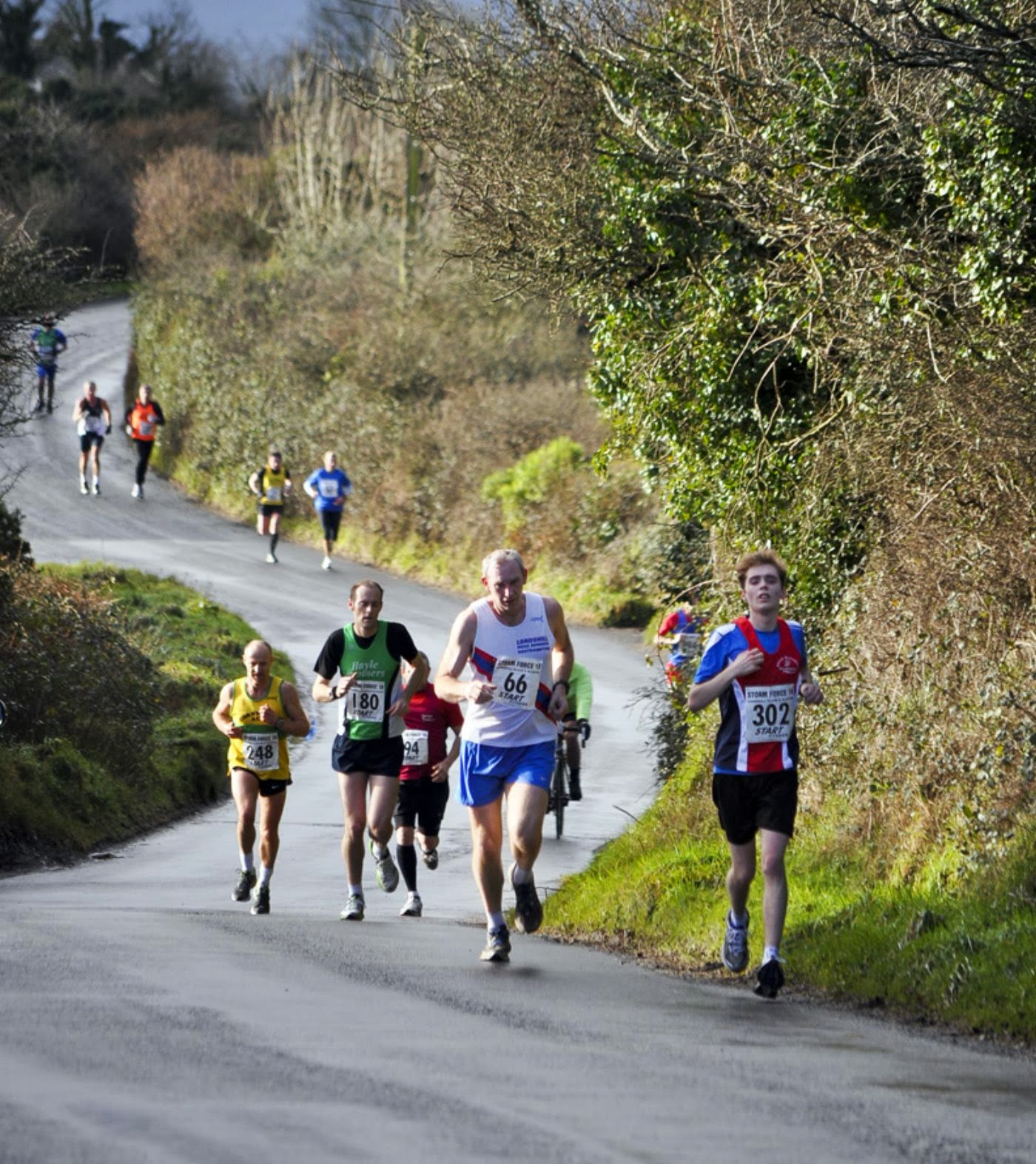 Although I used to live in Newquay, I have never done a race in Cornwall. I had friends down there so I thought why not book a race and catch up and do some skateboarding at the same time and throw in a cycle ride on the camel trail. The Stormforce 10 is part of the Cornish grand prix. Which is pretty much a Cornish league race from what I can work out. So you have all the Cornish clubs racing but there were also a lot of Devon club runners. Who knows how it works, i'm just making all this up now!

I didn't get to the start of the race in the best of conditions and I sure wasn't going for a PB that day. I had cycled to Padstow from Wadebridge and back along the camel trail and we had then cycled to Bodmin and back from Wadebridge as well. If this wasn't tiring enough we went skateboarding in Mount hawke but after about 10 minutes I had fallen off the ramp because my back foot had slipped off the board. I then rode over my own foot causing my ankle to twist and as I fell backwards I also hit my head on the ground. I felt dizzy and a bit shaken up. Panic had set in and I was freaking out. I was helped along by Five pints of Tribute. This was all the day before my race.

I wasn't actually expecting to be at the start-line of this race with all that beer and the stiffened ankle but it happened! I woke up, my buddy Chris made me a bagel with Peanut butter and we were off to Camborne school for the start. I collected my race number and stood staring around the room at all the other club runners. Falmouth road runners, Newquay road runners, Tamar Trotters, Truro running club, St. Austell running club etc.. It reminded me of our Hampshire road race league with all the teams in their colours gathered in different areas. A lot of runners saw my Lordshill road runners vest and spoke to me and welcomed me to their race and thanked me for coming down. What an awesome response! I even messaged Falmouth road runners to thank them for the support from their runners even though this wasn't their race. The "Carnies" were also nice though and spoke to a few other club runners at the start and on the way around.

We were very lucky with the weather. The sun was shining and actually felt quite warm even though it was the end of January. I enquired about the course. Any hills? Terrain etc.. Slightly undulating. Yeah right! Cornish people are funny. We started on a road going downhill which was fun. Loved overtaking people but the ankle was still a little sore. It was all road and mostly country lanes with some very big hills. The steepest one was at mile 4. As I ran down it I remember thinking. "Surely we don't run up there, it must turn off somewhere". Then I just replayed the voice in my head of the man who said it was slightly undulating. He must be laughing right now. And that was enough to make me smile to myself. I battled hard to get up that hill. Everytime I run up a big hill I think about Roger Bradley from our running club. He gave me the best, yet simplest hill running advice ever. "Keep your head up Dean, how are you supposed to get oxygen in your lungs with your head down there?" Haha. That man is a legend. 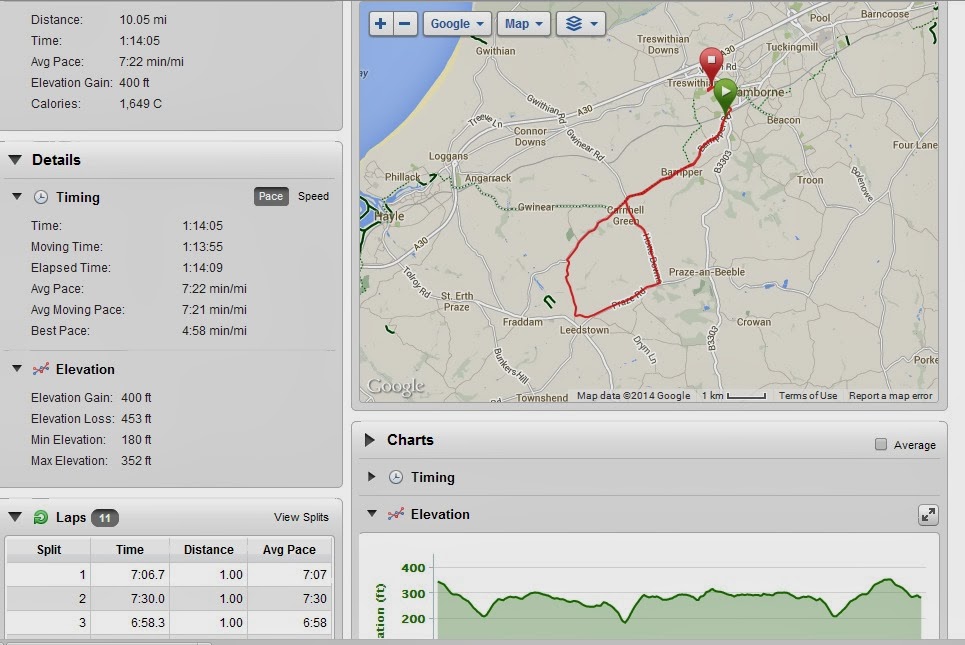 I remember wanting to average Seven minute miles as a training race but it never happened. I wanted to get some speedy miles in for the Romsey 5 as I was long overdue a 5 mile PB. So the course was just a series of country roads with hills dipping and climbing. About mile Seven maybe? We veered off to the left and onto a gravel path which was just kind of a cutway through the back of some houses. There was a really big downhill. My favourite thing in the world! I seem to get noticed in races running downhill cos I go flat out. Runners were saying well done as I passed many of them. My garmin said I was running a 5.46 minute mile but this ended up being nearly a seven and a half minute mile as this downhill had to end and mirror itself to another big hill climb just after mile 8.
It was around here that I got speaking to a man who used to live in Sway who was a keen tri-athlete and supported Bournemouth football club and drove down to watch them play a lot. I love meeting people and finding out about them. Adds to the awesome experience for me if i'm not racing flat out. Obviously, you can't actually do any chatting if you're racing properly ;)

Anyway, the marshall just after mile Nine told me that it was all downhill now. That was exactly what I wanted to hear. The ankle was still aching all the way round but wasn't affecting my running. I sped up and did my best to run fast. It was still dry but the sun had gone in. I crossed the line around 1 hour 14 and it started to rain. I grabbed a free banana and got a pair of more mile gloves and a hat that didn't fit me and we left. I was expecting a medal but didn't get one. I think I was supposed to go back into the gym for this? Wasn't sure really. It wasn't really clear. There was hot soup available though but I just wanted to go back to bed as I was feeling so tired.

Really enjoyed the race. Very challenging and would love to do more Cornish races. Falmouth road runners have also invited me down to train with them so I may take them up on that in the summertime.
Posted by d3@N j0n3s at 13:15