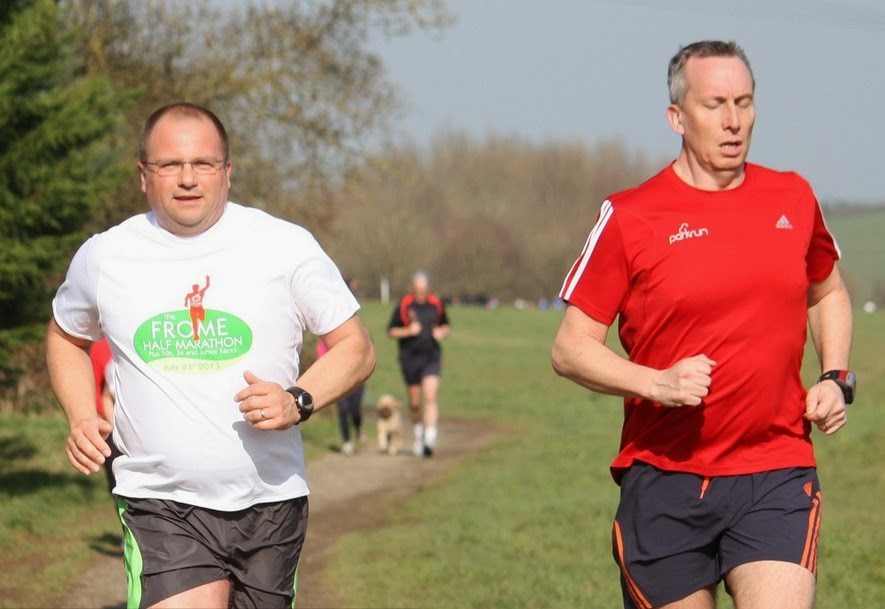 
So Neil says, "Do you fancy running Southwick parkrun on Saturday? It's my mate's 50th parkrun". The first thing I do is go onto the parkrun website and try and locate the place. Where the hell is Southwick? Turns out it's just by Trowbridge in Wiltshire. "Yes Neil, I would love to, but I have to get to a photography course in Fratton/Southsea by 2pm". "No problem he says".

He picks me up at 7.15 and isn't late! I'm so used to the Mattingly's picking me up, I thought it meant 7.30. Anyways, off we went past Salisbury and beyond. We get there, park in the carpark and walk over to the starting area. I had obviously done my research into the course and watched a youtube video too. Nearly three loops anti-clockwise on a gravel trail path and dirt/mud track around the beautiful Southwick country park. Today was different though. When the clocks are due to change on the Sunday, the course on the Saturday is ran Clockwise instead of anti-clockwise.
I spoke to many people about this. Some said this way was an easier PB course and others said it was tougher. I had no way of knowing as I had never ran it. We met up with Neil's mate Jon who was running his 50th parkrun. We were also meeting a Graham but he was busy getting in the miles before parkrun for the London marathon. Eventually we were all standing on the grass surround by worms at our feet and chatting away. Mostly making parkrun jacket jokes at Neil's expense. 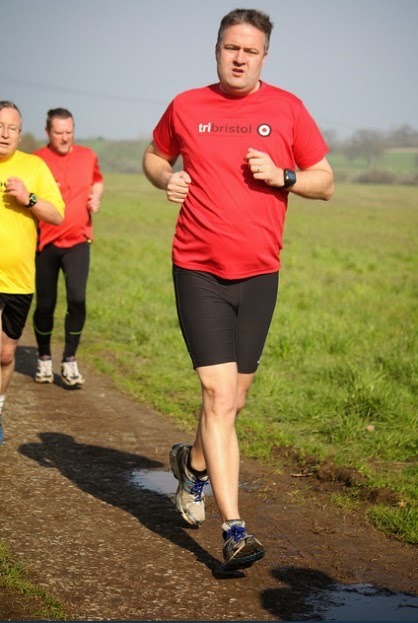 Jon who was running his 50th parkrun. Another stolen parkrun pic.

We got in line and were briefed about the course. The ankle was still sore, so I wasn't racing hard today. I started near the back and when we started, it was an uphill gravel track. We shuffled forward slowly as it was quite congested and narrow. I didn't care as I wasn't going for a fast time.
Half a mile in and i'm pretty much clear to run at any pace I wish. I was starting to pass quite a few people now and there were some tight slippery bends in some places which made it fun. The support was great as you came to the mile point and near the finish line and you get to run past a nice pond and over a little bridge. I ran a 7.36 mile but was now pain free in the ankle and wanting to push a bit harder, so off I shot on this lovely undulating course which seemed to be pedestrian and dog walker free. I ran my second mile in 6.40 and still felt I could push. I was really enjoying this.

The last mile was tough though and I was feeling it now. On the last bend of the course, right near the finish, the wind had now picked up. There was no wind on the first two laps but now it was very strong. I had run my third mile in 6.32 but the 0.1 mile remaining was so hard against a very strong. I pushed on and finished in a time of 21.40. I was really happy with this. Neil and co were still running so I thought i'd go back a support with one of the marshals.

We cheered and clapped as the runners went round, shouting words of encouragement. The thing is that you couldn't tell how many laps someone had run so you couldn't really say "Well done, the finish is just around the corner" because it might not have been! Neil comes over the bridge and is running pretty well I think, but obviously I don't tell him this. "Come on Neil, put some effort into it" I holler. He tells me i'm walking home as he runs past. I laugh nervously. I hope he's joking. 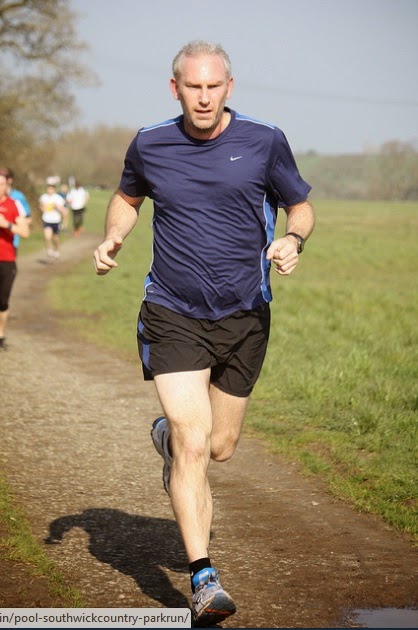 Me trying to look all mean and serious for the cameraman

I forget that Neil has past me despite trying to mock him and continue cheering on the other runners. I was really enjoying the smiles and thank yous that people give you when you support. I then remembered that Neil had finished and headed back to the finish line where Neil and I ate Jelly babies and Jelly beans. There was also free chocolate on the stall but it was only 9.30ish. Too early even by my standards.

We congratulated Jon on his 50th parkrun and walked up to the Squirrel's cafe. I chatted to Graham about running and various races. He runs for Frome running club and told me about a few of the local races.
Squirrel's cafe is a charity based cafe and does amazingly tasty and cheap food and most importantly of all... Coffee!

As we ate bacon sandwiches I got to hear so many funny stories. Most of them were about Jon. Now, I never wanted to play golf in my life until I heard half of Jon's stories. It sure was a great event with great people. Every five minutes though, Jon would threaten to apologise to a woman in a black top who he swore was the woman who he had spat in the face of on today's parkrun. It must have slipped his mind eventually because we left without approaching her.
The only other memory I have is being in the queue for more coffee and this woman telling me about her mushroom allergy. "Can you smell them?" she would say. "Disgusting things". I didn't have the heart to tell her that I loved mushrooms. "Bring me out in a rash they do and my face all swells up". Hurry up serving lady, I just want a coffee..lol.

I would love to come back to this course and do it again. Apparently it gets quite muddy in the winter though. Very friendly people and a great way to spend a Saturday morning. Beats playing golf anyway ;) 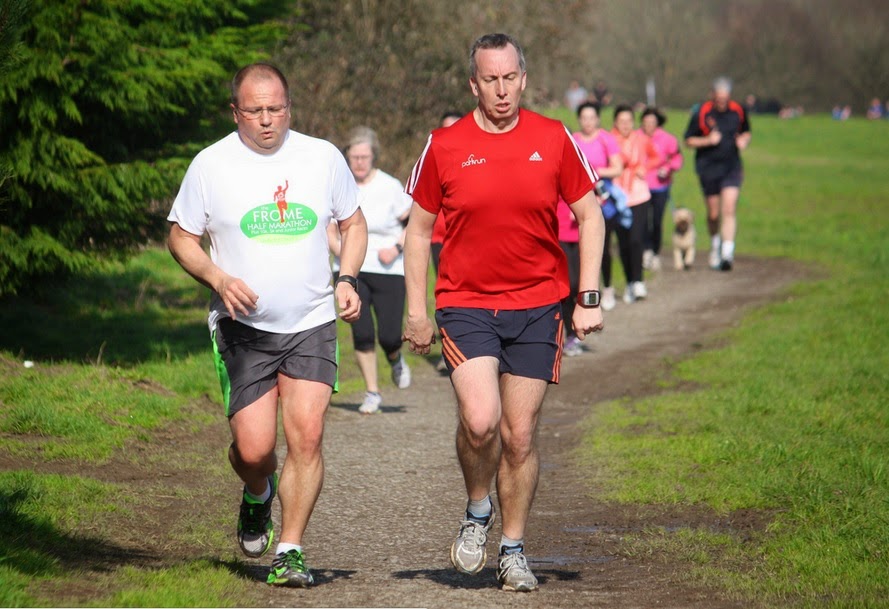 Graham and Neil leading the pack on a lovely course
Posted by d3@N j0n3s at 13:19