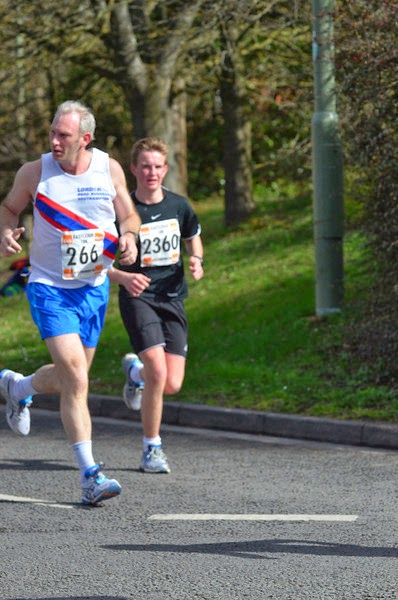 Thanks to Paul A Hammond for this photo. Exchanging a few words with Stuart Smith just after 4 miles?


The Eastleigh B&Q 10k race is a very popular race. Not only is it a Hampshire League race but it is also known as a fast, flat PB course! I had been wanting to run this race for three years now. The first year I entered I had torn my soleus muscle very badly at the Salisbury 10 mile race a few weeks before. In fact, I had torn it way before that but kept on running on it until I could run no more and was losing the feeling in my leg from time to time so it was time to finally rest for recovery and this was very slow. It took about 5-6 months again before I ran and even then I could only run about twice a week because of the aching afterwards. I now run 3-4 times a week and no more as it will still cause pain from time to time.
Anyway, the following year I eagerly entered again, but again, I got injured at the Salisbury 10 mile race. This time it was shin splints. I was in agony straight after the race. I even went for an x-ray as I thought I had a fracture because the pain was so bad. This was due to me thinking I hadn't trained enough for the race and ran a speedy 10 miler two days before the race. This was obviously too much strain for my poor legs. Both times at Salisbury I got injuries and both times I PB'd. Next year (2014) I vowed not to run the Salisbury 10 race and just run the Eastleigh 10k. This nearly never happened though as I had fallen off a curb and twisted my ankle when I was out celebrating a mate's 40th birthday. I'm not accident prone... honestly! 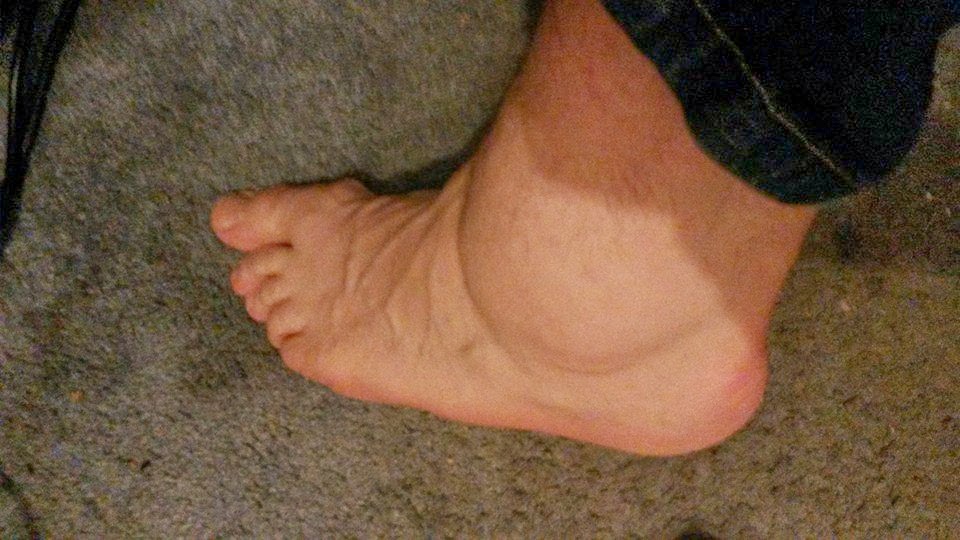 My ankle on the Wednesday. 4 days before the race.

It was doubtful that I would make it to the startline or even finish the race. I was not too confident as the ankle was still sore and a little swollen. I was long overdue a PB on a 10K race as I hadn't run a 10K race in 15 months and was hitting 41+ minutes in 10 mile and half marathon races. My current 10K PB was 42.12 from Stubbington in 2012. 41.12 was also my first 5 mile time at the Braishfield 5 mile beer race where I was beaten by Derek Goodchild.

I didn't know what I was going to run like today. I was excited about running but not hyper enough to believe I was going to run well. I stood with Mike Mattingly in the starting grid and off we went. Mike shot off and I had trouble keeping up with him! He was weaving in and out of the congestion and I simply couldn't be bothered. It took me about 30 seconds to cross the chip timing mat and I was still walking when I crossed it. The ankle was sore and I just wanted to make sure that I didn't turn it over again, so was very cautious about every step I took and knew I had to be focused on this even in the last miles when I would be tiring and the ankle would weaken and become vulnerable.

After 3 quarters of a mile, I was feeling good and the ankle had warmed up nicely and had now felt pain-free. I had run my first mile in over 7 minutes but wasn't too bothered. Time to give this race what I had! I dangerously cut across in front of a runner and felt bad about it even though he swore at me. In my defence, I don't think you should be in the "Sub 40" section at the start if you're going to run a 7 minute mile. Later I would also get told off by marshals for running on the wrong side of the road. I was in the zone now though and nothing was going to stop me... apart from the ankle maybe.

There was a slight hill on the third mile. I had already passed Rodolfo but as you may know, uphill is a big weakness of mine and he passed me. This didn't last long though as after this, there was a delightful downhill where I passed him for the second time. I was flying past runners on the opposite side of the road but was still getting breathless and tired. I had hit the 5k mark dead on 21 minutes. A PB was possible at this point.
I had decided that at 4 miles, I would ease off the pace a bit and as long as I ran the remaining 2 miles at an average pace of 6.45 each, I would PB easily. I was quite confident now. This is when I saw Stuart Smith and he was yelling abuse and telling me I looked too relaxed. Was great to see him, Rob Kelly and the other supporters from our club. I could only hear some of the supporters shout my name but weren't sure who they were. I don't really remember much about this course, it just seemed a blur as I was just focused on the race.
I then caught Laure at about 5 mile and told her to get running. I shouldn't be able to catch her as she is super speedy. We ran together anyway, and she was now my motivation. These last miles weren't as easy as I had hoped. We were running hard and I managed my 6.45 at mile 5. I saw Dan Campion who stood out cheering as I approached. Just the sight of seeing Dan made me run faster as he is one of my running heroes and an inspirational figure :) We pushed to the end but the wind was strong against us. The last stretch seemed to last for ages. Where's the finish line? There was a lot of support at the end which always makes me want to run faster but I was struggling for a sprint finish. I told Laure to run ahead and she did and then Rodolfo flew past me with an amazing sprint that I was in awe of. I had finished with a sub 42 on my garmin and got a chip time of 41.28. That's a PB of 44 seconds :) This also happened to be my 50th race! 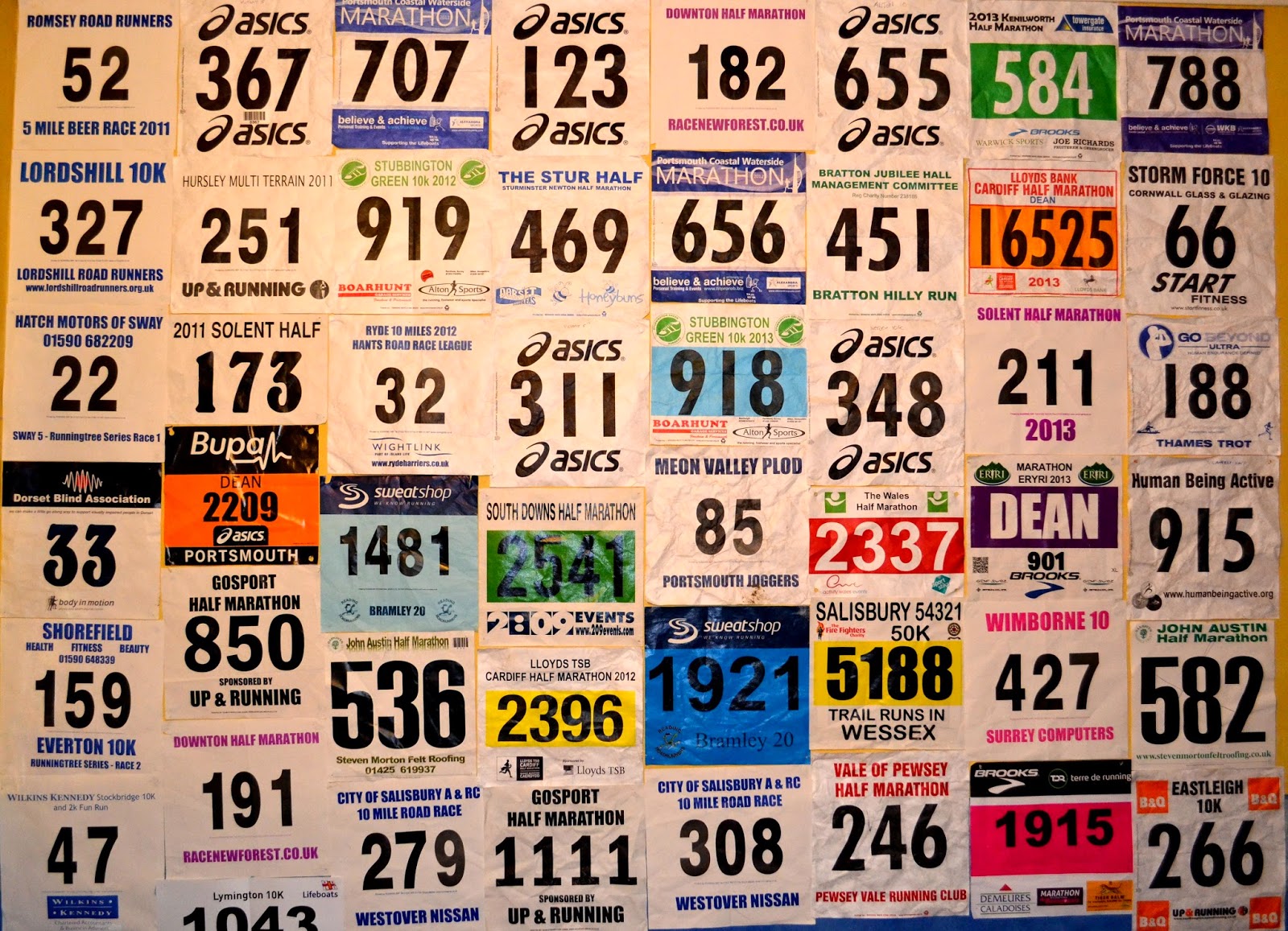 A great day was had with the club and it was so good to see my fellow runners who I hadn't seen for ages. This was the shortest race I had run in 15 months and it felt weird that a race could be over so soon and to be eating cake at the finish of a 10K..lol. The guilt! I also got a T-shirt but they only do Large t-shirts, so sadly I don't really have a memento from the race apart from my race number... Oh, and a PB ;)

A big thanks to Stu Smith, Dan Campion, Kathy Annals, Rob Kelly and Emily Brent for the support and the others that I forget. Now resting my ankle and hoping to make the start of the Brighton marathon.
Posted by d3@N j0n3s at 14:19