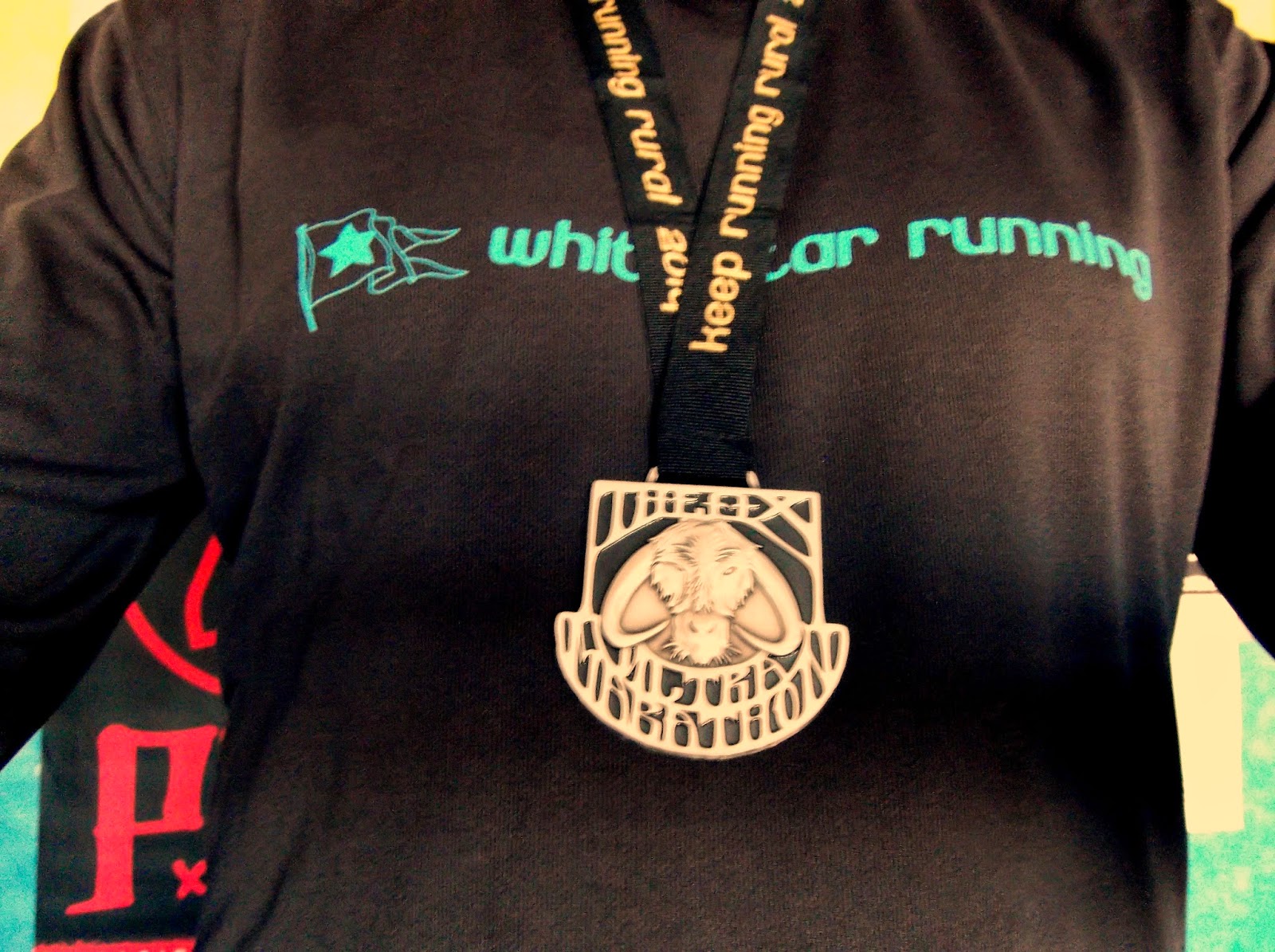 
So Rob Kelly is my old coach from my running club, Lordshill road runners. He sends me a text one night: "Wanna do this race called the Ox ultra?". I google it and sure enough there is such a race and it's run by some people under the name of "White star running". Never heard of them? Me neither. Anyway, looking at their website you can tell that they are totally clued up and well organised. It didn't take me long to reply to Rob and tell him I was in. I was dying to do another ultra after the Thames trot in Feb. We both entered without too much thought and one day I thought i'd do a bit more research into the race and maybe read something.
It was going to be the first time that this race had ever been held and there was roughly 4000ft of ascent! Oh dear. I spoke to Rob and told him about the elevation and what a nice job he had done on picking his first ultra marathon race. It really didn't matter, I was still so excited. 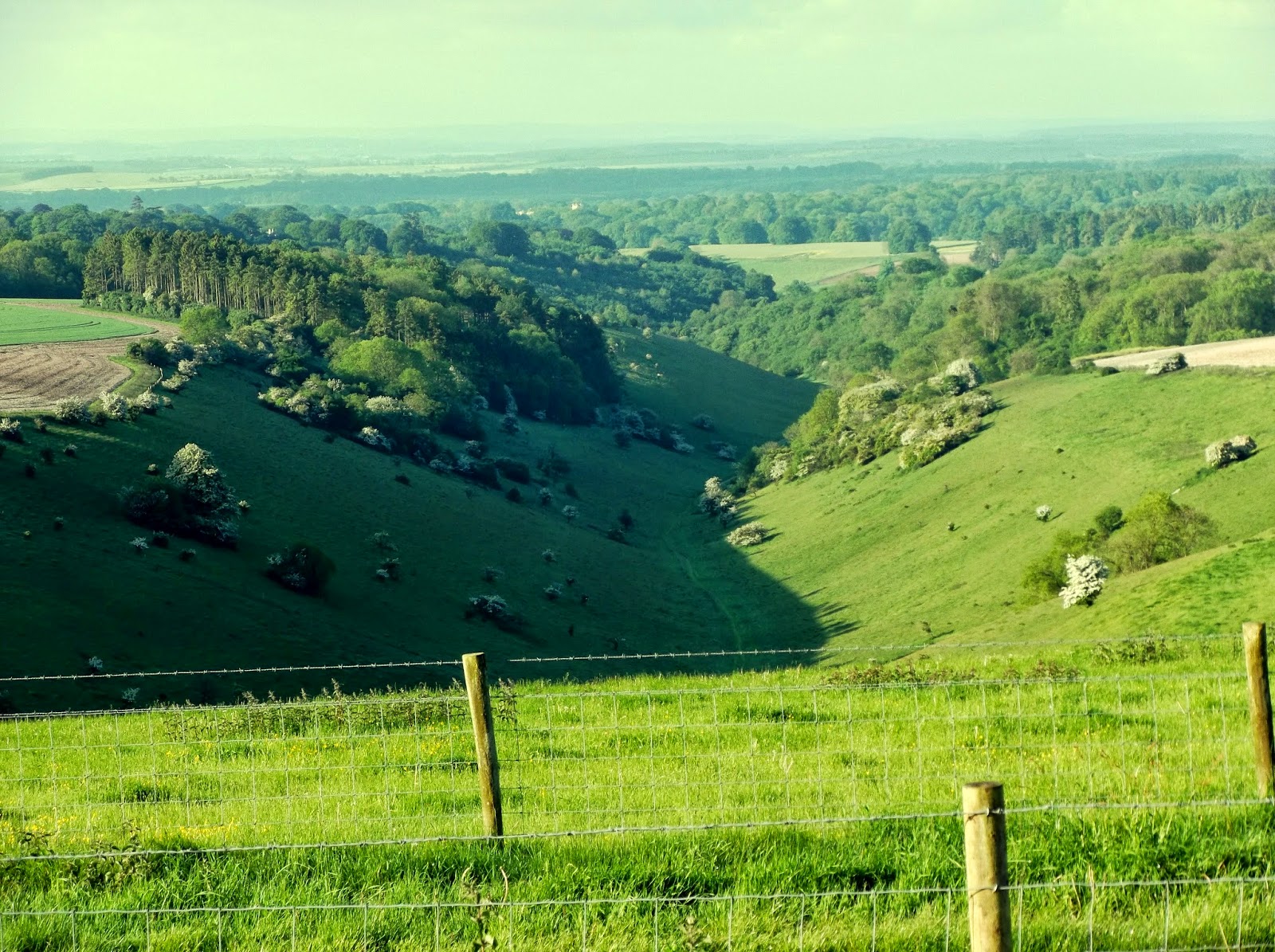 View from the car park, registration and close to start. Yes, that's part of the course down there!

Anyways, Rob picks me up at 6am. We had been discussing food, hydration, maps etc..
We were really well prepared, apart from the lack of training but I told him to treat it as an adventurous day out. Time did not matter. Neither of us had a 35 mile pb yet.
The Race is on an estate in a place called Tollard royal where they hold the Larmer festival. It's kind of between Salisbury and Shaftesbury I think.

We get there with plenty of time to spare and go to collect our number. It's bloody cold and very windy on top of this big hill. There were three events on today. There was the 35 ultra, the marathon and the half marathon. We queued and the man asked "Ultra?". We said yes and then I made a joke as it reminded me of that bit from the Monty python film, the life of Brian. "Crucifixion?". "Eh no, freedom.."

We had a good race briefing with some great humour in there and then headed over to the start. This was it, we were ready. Just after 8am, we set off in the cold wind. I was hoping it would get warmer as I was only wearing a t-shirt and didn't bring a base layer or even a coat in case it rained. It looked like it might rain at the start as well.
Lots of runners were chatting and exchanging stories as we ran on the uneven, bumpy grass. I was concentrating on my footing as i didn't want to roll an ankle on the first mile. After the first mile or so we started to head down the hill and around a corner and then before long we were rising up again. it was time to walk up the steep hills. 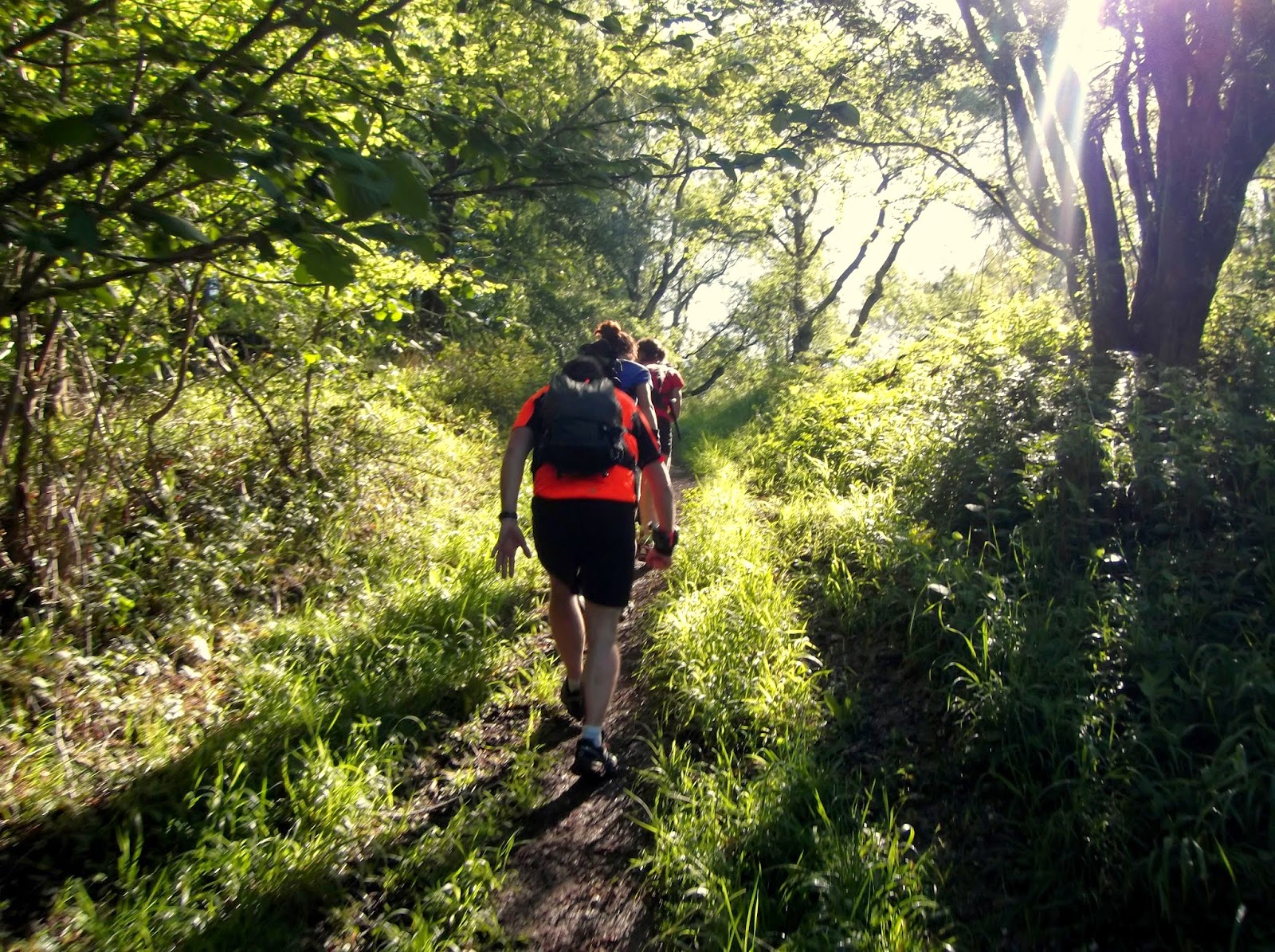 Hiking up one of the hills

It wasn't too long before we were nicely spaced out. I loved the fact that the scenery and terrain were changing all the time. No chance of getting bored on these 35 miles! We would be out in open fields on the grass and then running through shaded woods on trails. Later it was be a nice country traffic free lanes with amazing landscapes. 6 miles at the start just flew by. We were told that it would be roughly 36 miles today as they had diverted the course to avoid some flooding, or a 4ft deep puddle as they put it.
We were still going to get wet feet though. We passed through farms with cattle, there were sheep and pigs on route as well. We also spotted a bird of prey hovering overhead in the later miles.
The aid stations were fantastic and so were the marshals. You were allowed bag drops for your stuff. Rob and I decided to share bags. We left one bag at mile 13 and one at mile 25. We had put so much food in there and we didn't even touch any of it as there was food at the stations. Pork pies, savoury eggs, jelly beans, party sausages, chocolate, even sandwiches and watermelon! They really had treated us well. Every marshal was enthusiastic and spoke to us. Making jokes and encouraging us along. 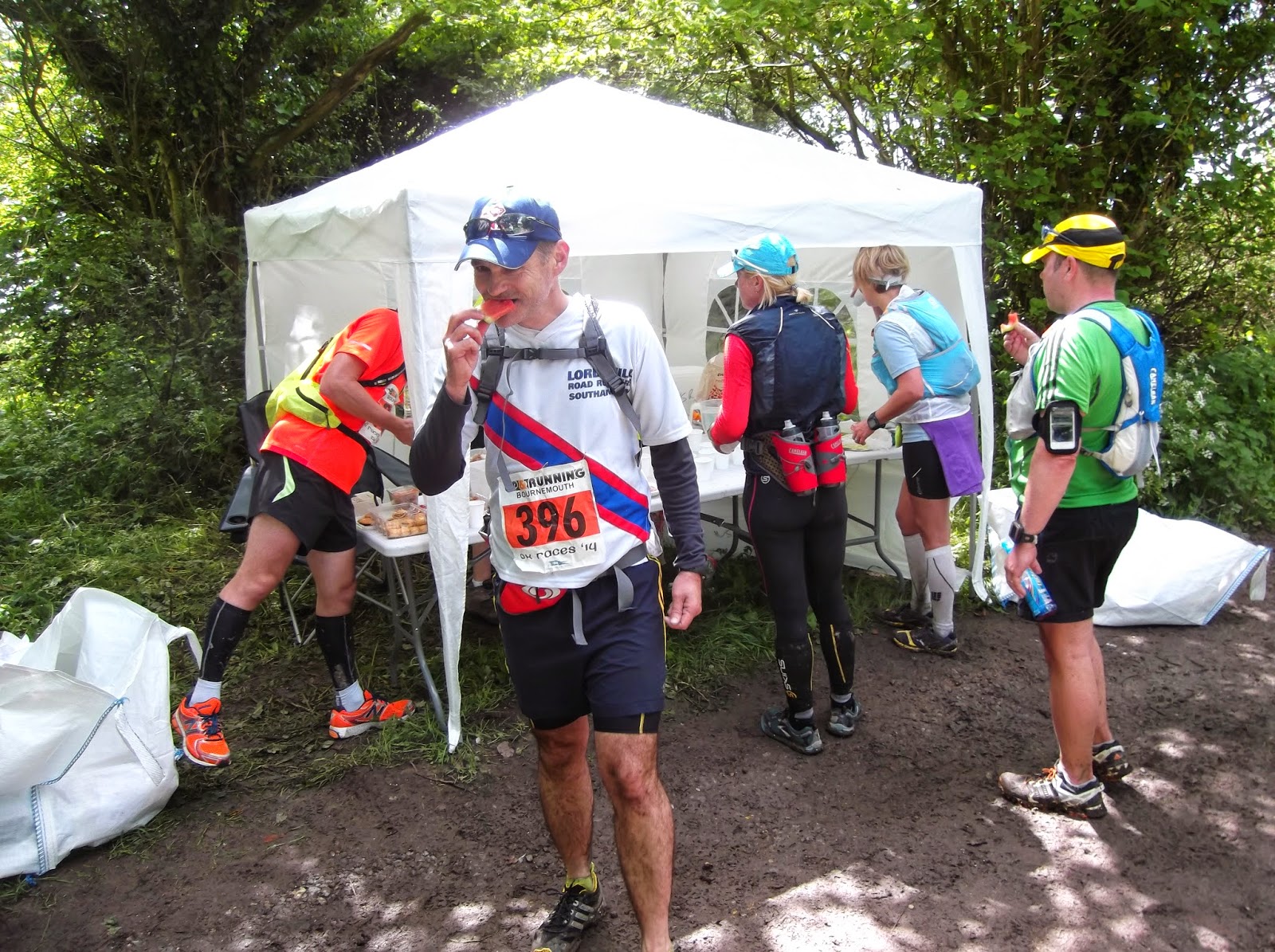 Food station around mile 16 and 21? We were so grateful for the coca cola

We had got to the place above. I think it was mile 16. Anyway, when we got there the leader was coming in the other direction. He had covered around 5 miles more than us already!
There was a bit earlier in the race that I had forgot to mention. We came to a wooded area where the yellow arrow was pointing left. We went left and came across lots of confused runners. No-one knew the way. We were all lost. One guy told us he was 4th at one point but had now ran 16-17 miles. We had only ran 12.5. Poor guy. Someone had tampered with the sign and we should have taken a right turn. The sign had been moved by someone.
There were plenty of theories of angry dog walkers or motocross riders. It didn't really affect us but I felt sorry for the other guys who were racing this. The organisers were very sympathetic and assured us that this would never happen again.
Apart from that, the whole 35/36 miles were so well signed and marshalled. In fact, it was faultless apart from the obvious that happened. 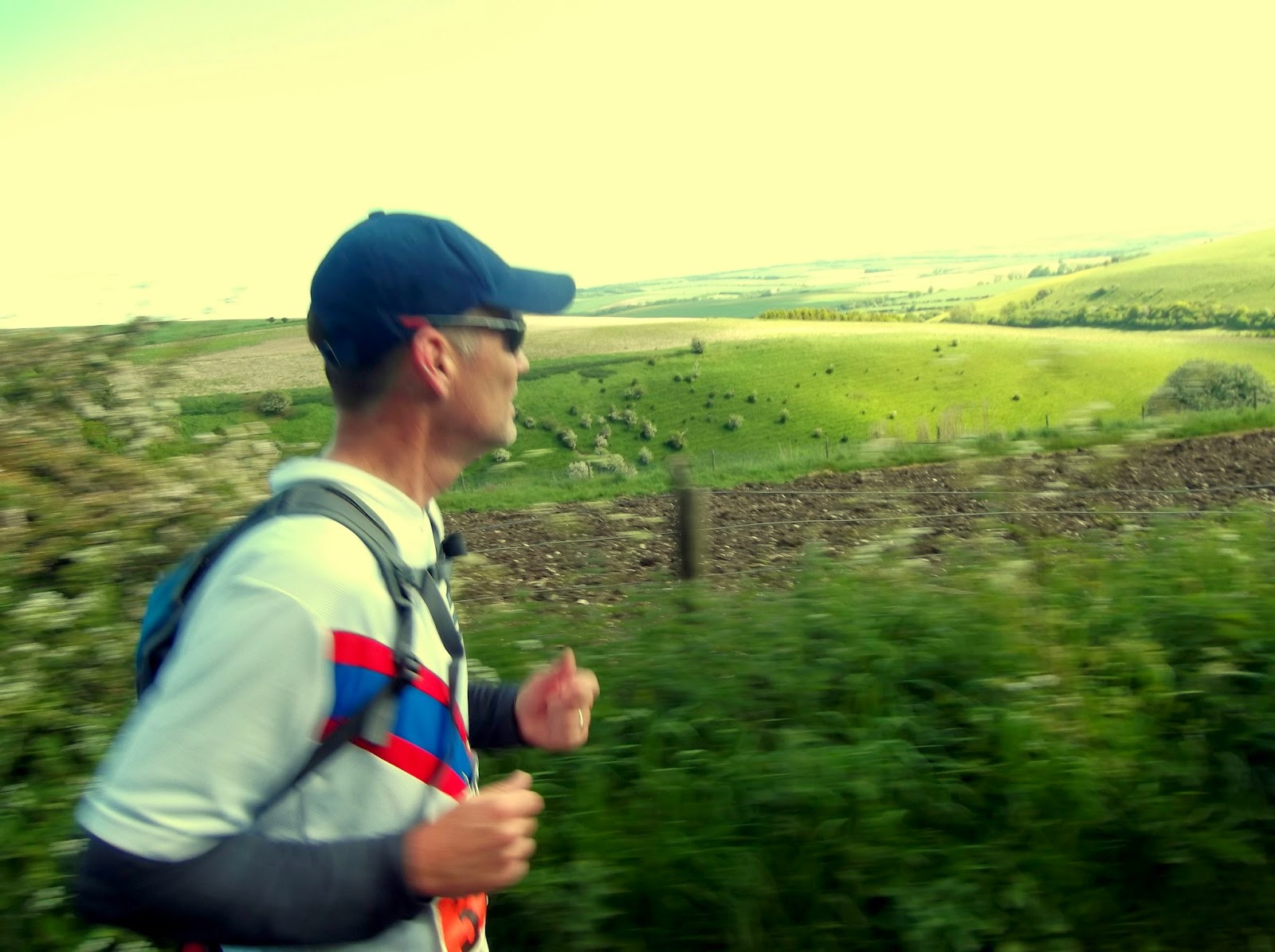 We had run through some mud, but not a lot. We had also ran through some puddles now as well. Our legs were aching and we had wet feet. We had decided on a nice long pit stop at mile 25 so that we could refuel, change our socks and a change of t-shirt for me. About 5-6 minutes we stopped for and it felt well needed. We chatted to others and shared blisters etc.. That rest and the clean socks and T-shirt was brilliant for our spirits. We were felling great again and ready to attack the last 11 miles of so. I was struggling a little bit in the woodland earlier, so when we hit some open road, it was much appreciated by myself.

I had told Rob that this is what happens. You run so far and your legs ache and they keep on aching but after a while you become desensitised to that feeling and it becomes the norm. We did a celebration whoop as we reached mile 27 as it was the furthest that Rob had ever ran. We were ticking off the miles now. I said at the start that we are only doing 5x 7 mile runs.
I always do the same at races. Tick off the miles. 10k done, 10 miles done, half mara done, 20 miles done, 25, 30 etc.. 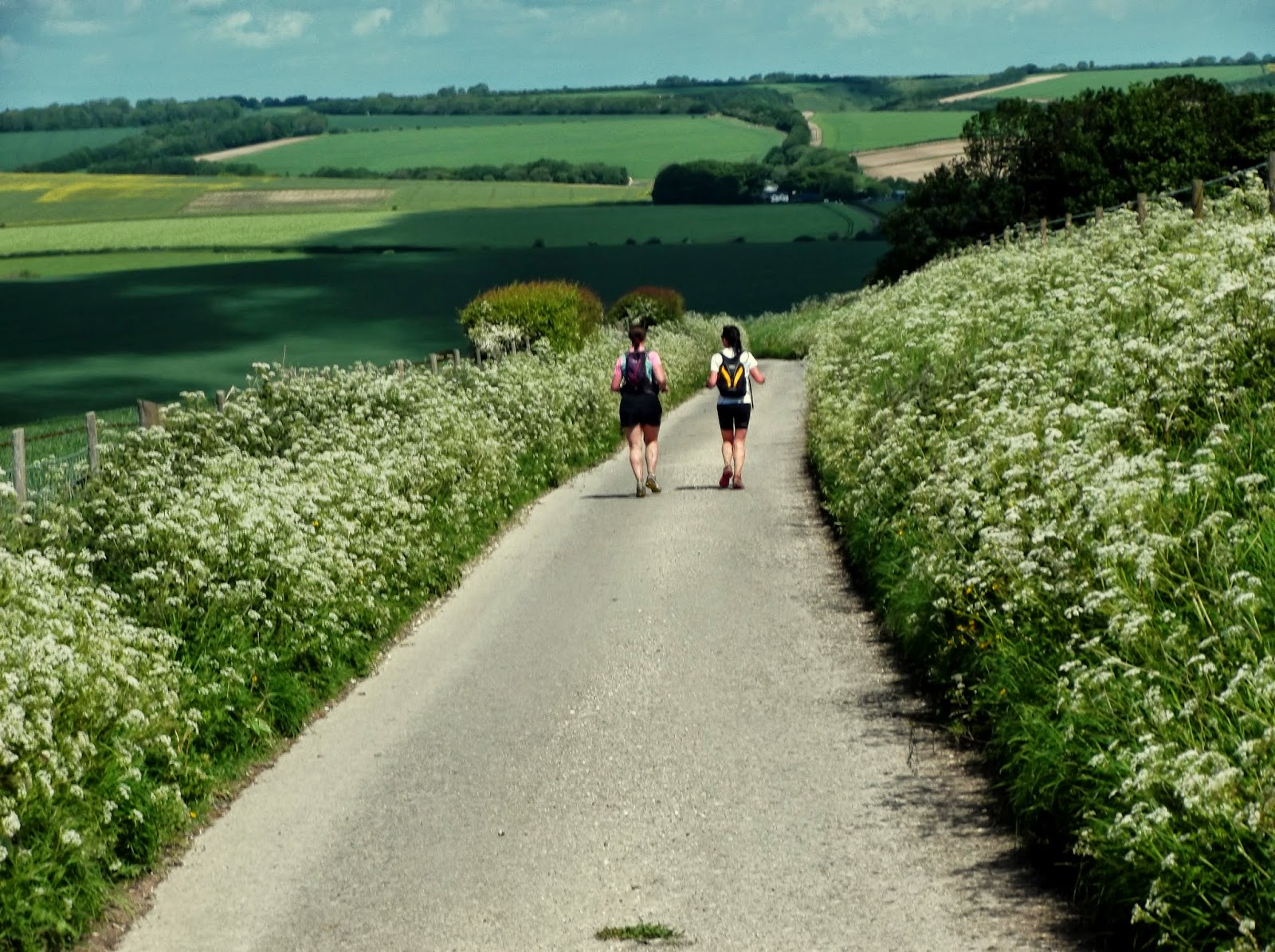 Beautiful views ahead and i'm not just talking about the ultra ladies!

The next thing we were looking forward to was the "Love station". White star running knew how to organise an event. At 32 miles there was the Love station. At this station there was cider from a brewery in Wareham and Vodka! Now that was worth visiting but even more so, we were very low on water and it was hot in the heat now and we were getting a little dehydrated. I was a little dizzy at mile 30 and made Rob walk for a bit as i had to fight off a panic attack. Seems to be a common thing for me in the 30 mile zone for some reason. i knew it would pass in a couple of minutes. Fuss over and we were running again.

We spoke to more runners as we got nearer to the finish. We even passed a few who were now looking tired and walking, we were also passed by some as well though. There must have been about 6 miles where we ran and never saw another person though. That's what makes ultras so good. Not overcrowded and if it is, it will only be at the start. Little did we know after the event that there were on 75 runners! I thought there were a lot more. 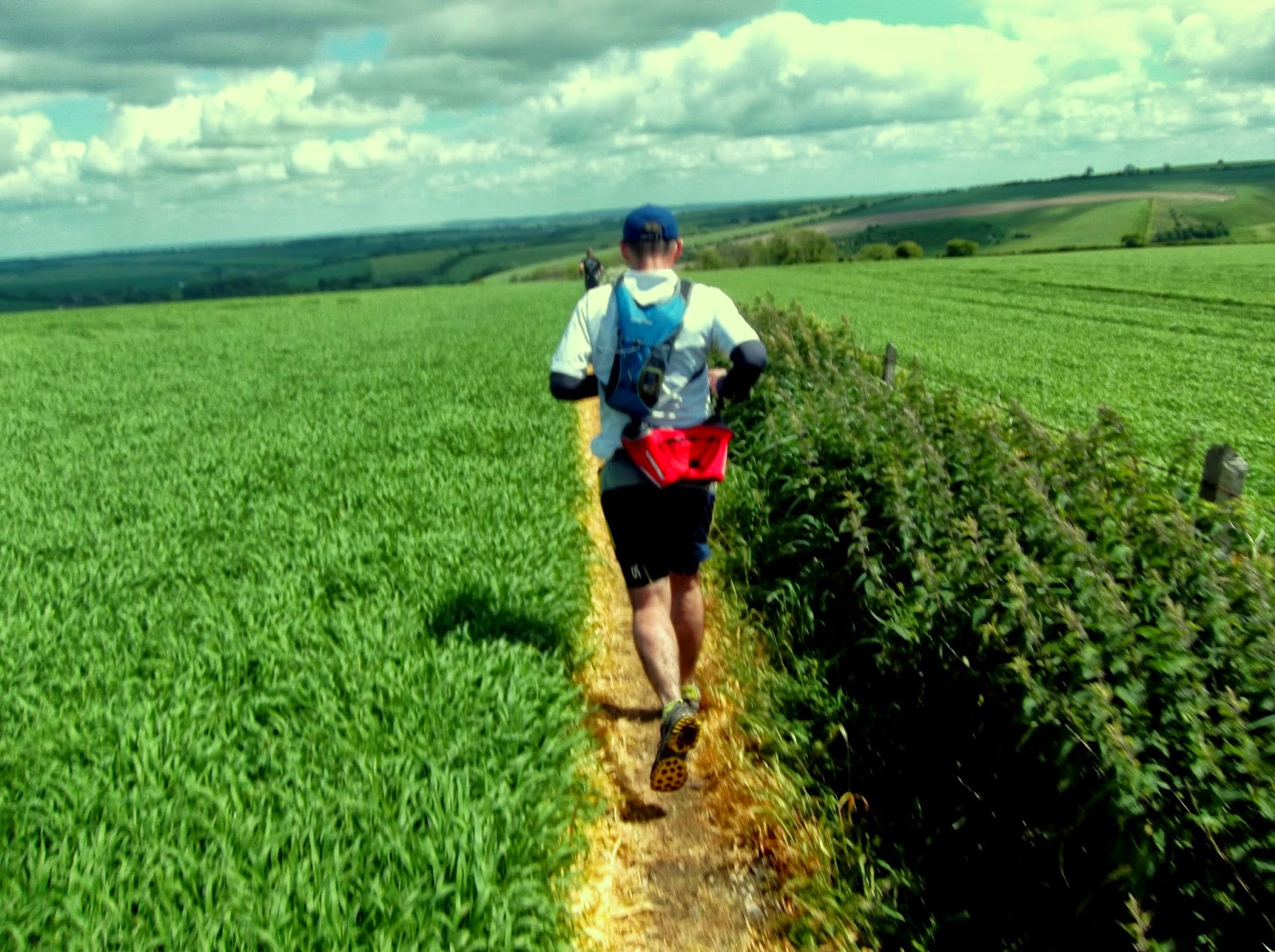 Another very memorable part of the route.


Rob got stung a few times by the stinging nettles. Made me laugh every time he got stung as I was wearing running tights. He reckons the Dock leaves worked but they've never worked for me..lol.
We knew there was a big hill to come at the end but just before we got there we met a guy called Nick from Bournemouth. We got chatting and ran together for a while. The marshal warned us about the hill and so did some local villagers. I high-fived a little kid who was holding his hand out and then we turned a corner and saw a sign saying "Up". We were here. Then there was another sign saying "The Hill" and underneath it said "Sean Connery". I was confused by this but Nick explained that the hill was a Sean connery film and it was very good and also Sean Connery's favourite. (i'm yet to check it out).
When we got to the "Up" sign. I told Rob i'd take a photo. He got on his knees and I said he had to try and look like the dude on the cover of the film "Platoon". (not a Sean Connery film). 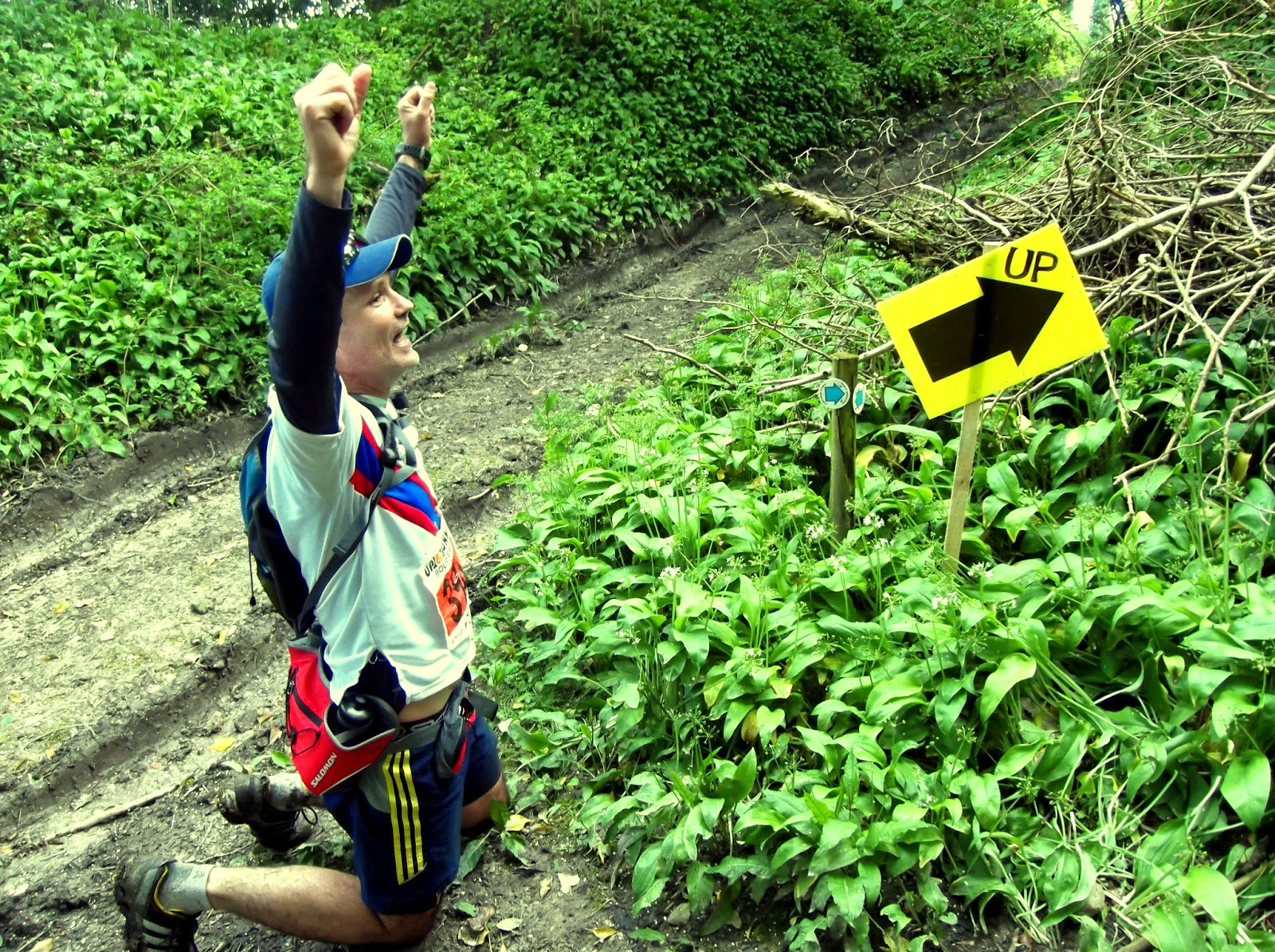 Platoon would never had sold any copies with this cover!

Not only is the hill too steep to run up but it's also covered in thick, gooey mud. We get to the top though and even though we're on grass now, we still seem to be climbing. What a view though! We keep going and we know we are nearly there. The excitement is overwhelming. We see Rob's wife Kim who cheers us on. Me, Rob and Nick all run together and finish together. There was no race here, we were proud to all finish together. We ran in to a big cheer from the crowd and I watched the big digital clock tick away. 7 hours and 44 minutes! Rob was thinking 5 hours at first. I was think more 6 or 7 hours. We were pretty sure at mile 18 that we would get a sub 7 hour time. Seems crazy as we are both around 3.30 marathon finishers. Just goes to show you how tough this course is. 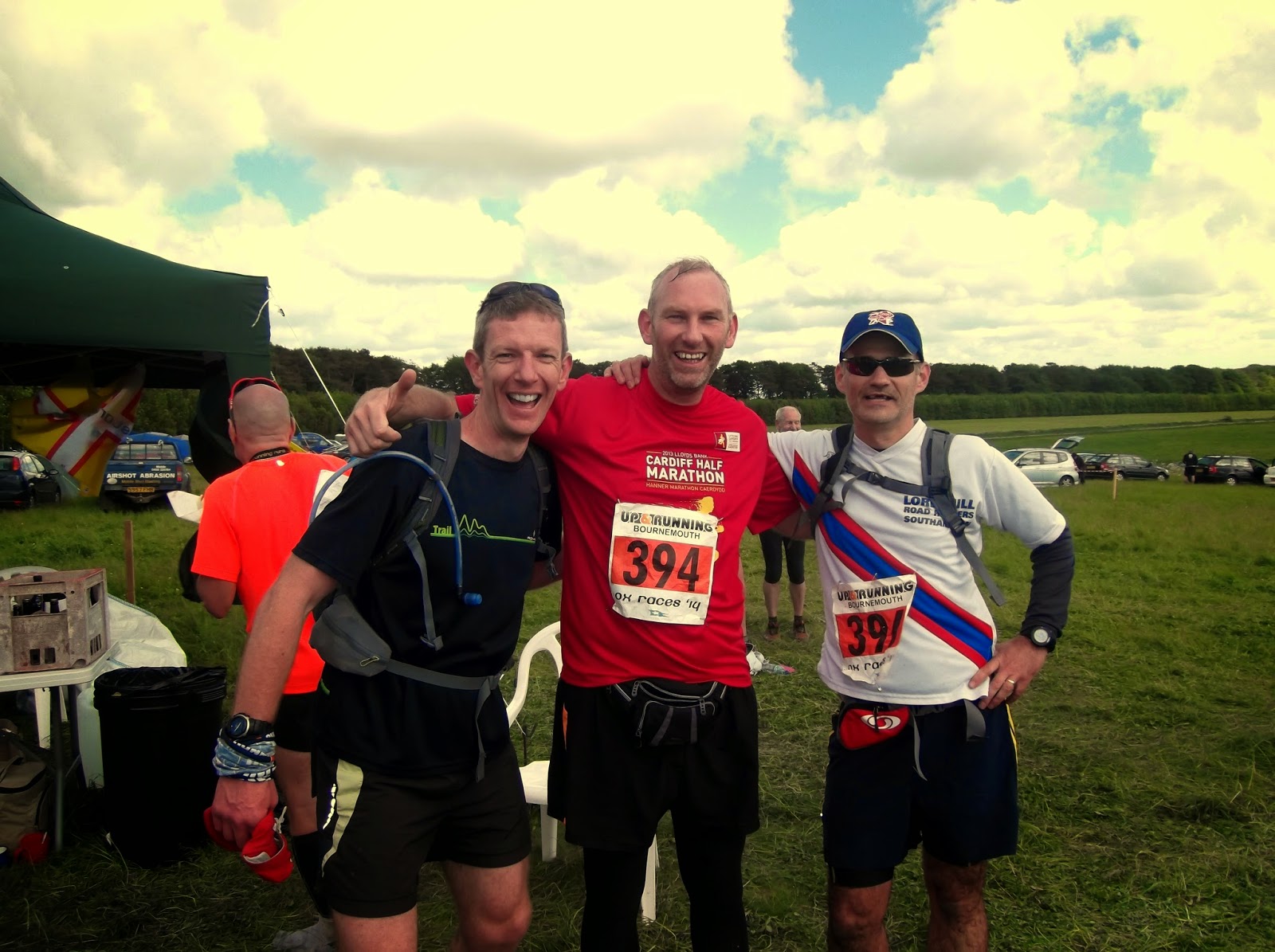 Nick, Me and Rob. Photo taken by Rob's wife Kim.

We had lovely showers and I ate 2 cheese burgers as Rob didn't want his. The cheese burgers and baked potatoes were free to the ultra runners. Rob already said he wanted to run it again next year and I agreed. This is a must do race. One of the most beautiful, well organised with very friendly people. I can't wait for next year. Sub 7 next time! Not bad though as none of us had trained for it. Took me 3 days to walk down the stairs properly and i've just put a hot needle through my black toe nail but all worth it :) 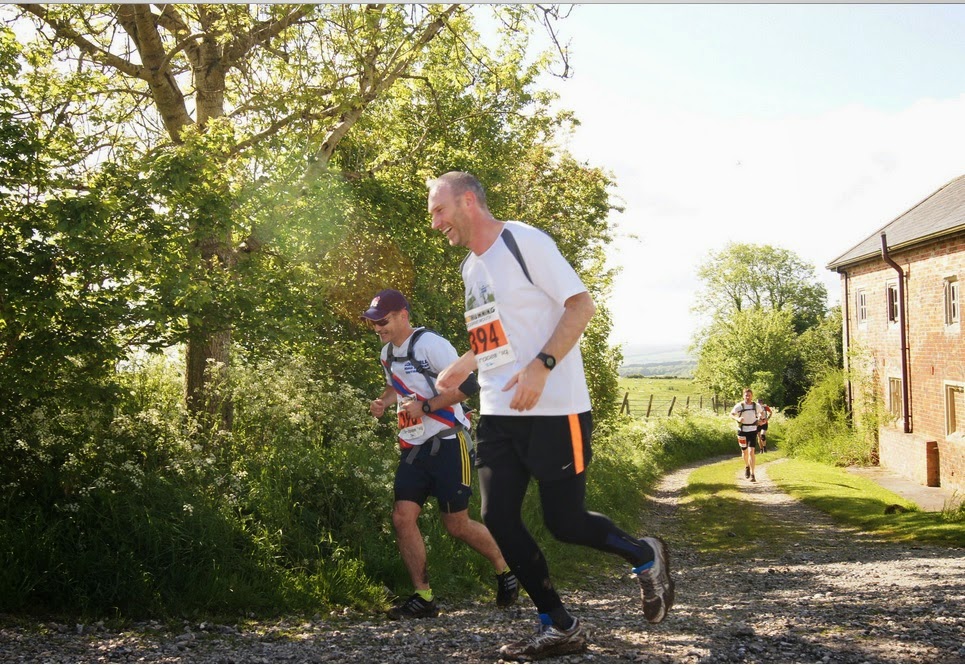