It's hard to know where to start with this story. I guess that one day I woke up and decided that I wanted to run another ultra. After a bit of searching I found the Ely ultra. It sounded perfect. No need for navigation or a compass. In fact, they said it was idiot proof. I couldn't really get lost! The other thing that appealed to me is that it is flat. 45 miles from Ely Cathedral to Cambridge and back. Most of  the route being on paths.

I paid £35 to enter this race. £6 cheaper than the Great South Run but an extra 25 miles and a much better long sleeved technical running t-shirt, medal and free food and coca cola :) There was a limit of 75 runners which meant no congestion and a very friendly bunch of people. some of them I would get to know quite well. The thing that scared me the most was running 45 miles solo. I don't think I could do that mentally. But I had paid and no-one else I knew was interested.

I got the train to London, changed on tubes, got another train to Royston, bus service to Cambridge and then another train to Ely. It was a long day and dark by the time that I got to my hotel room. I ate well and got an early night as registration was at 6.30. It was still dark when I registered and couldn't even see the faces of the event team.

As it got lighter I spoke to the other ultra runners. some told me they had got lost the previous year. Some told me about the route. We joked and laughed about our own stupidity of running 41 miles. I was told that the course had to be cut short due to a Triathlon happening at the other end. I was a bit disappointed by this obviously. We had a nice briefing and I had prepped well.
We were told that we needed to run with two things or we would be disqualified: A rain coat and a fully charged mobile phone. I had my running backpack with waterbottles, enough food for a week, a change of socks and a t-shirt, written instructions and money were also in my bag. I had also downloaded the course onto my phone in case I did get lost. A lot of prep goes into some of these ultras! 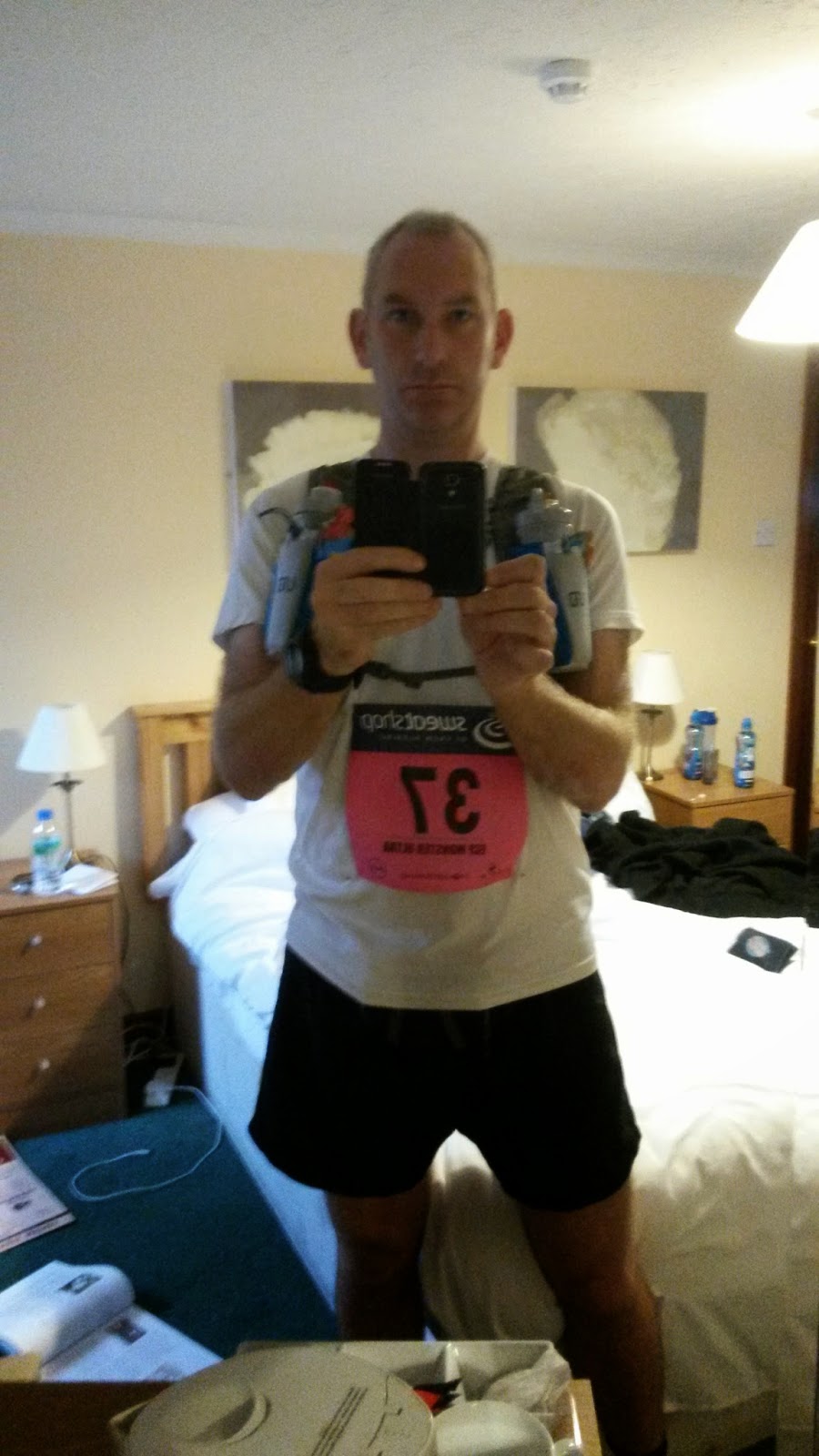 I chatted to a local man named Robert who got lost the previous year. (Idiot proof remember!) After speaking to him, we thought we would run together. He did 8 hours 15 last year and managed 51 miles somehow, he also had the race number 13 this year. Maybe he was just a bad omen..lol.
He wanted about 3 hours to Cambridge. I wasn't sure and said 3 to 3.30 hours and slower on the way back. Off we went at 8am. The streets of Ely were still deserted. We went through the Cathedral and downhill into a park and before we knew it we were onto a canal path. We were all chatting with excitement and still joking about stuff while taking in the views.

I got talking to a 29 year old school teacher called Pete from St. Albans. I thought he looked and sounded a little bit like Danny Dyer and was a very nice guy. He had recently completed his third Ironman in Sweden. He decided to run the same pace as Rob and myself. We were now a trio. We swapped race stories and experiences. Pete told me about Ironmans and Mountain marathons, Rob talked about races he'd done and as always I talked about Man V horse and parkrun.

After a short while we came onto cycle path 11. Most of the ultra is on cycle route 11 with the odd bridge crossing and village visit. There wasn't really much to see to be fair so I was glad not to be running alone.
"What time are you going for?" That question came up a lot. I was thinking sub 7 hours to start with and then I thought sub 8 hours and then I just wasn't sure. We were running consistent 9 - 9.30 minute miles. Ah, let's just see. There were waterstations at midway of the half marathon point, halfway of the marathon point and halfway for us at mile 20 something. (There was also a half marathon and marathon starting at later times.) 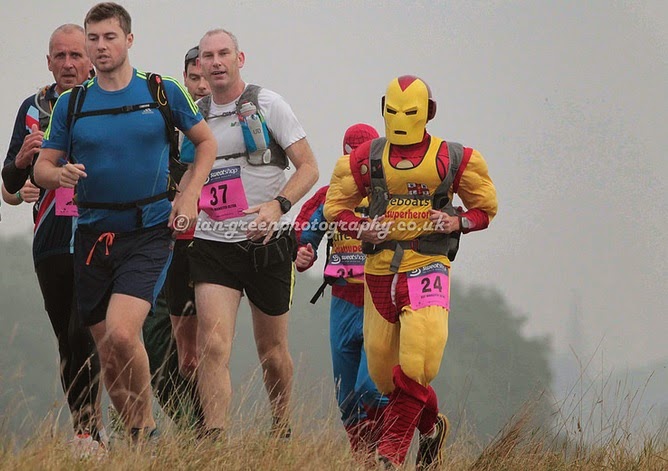 We were lucky enough to meet Ironman, Spiderman and the green lantern. As if running 41 miles wasn't mad enough in the first place! It was a very humid day even though the sun was mostly obscured by clouds. We were very grateful for this. I thought we would beat these guys easily but I was wrong.
There was a uneven grassy area that we had to run on for a mile or two at about mile 15? This was tough as you were having to think about your every footstep and climb over a couple of stiles. This would also had to be done on the way back at around mile 25-26.
We had just passed some horses who were blocking the whole path but managed to walk through them without getting kicked and from then it was all canal path again into Cambridge. We could watch the barges on the canal and the rowing teams practice. Passersby would ask me about the event and looked shocked when we mentioned the 41 miles. It was very amusing to watch their facial expressions and reactions to this. We were mental..lol

By now, it's just me and Pete running together as Rob had dropped back. Pete didn't really want to waste time at waterstations. We walked while we ate and then just ran again. This was a great idea and worked really well for the first 20 miles. When we reached mile 16, the leader of the race was already coming back the other way! He was 8 miles ahead of us. He smiled and said well done to us. What a lovely guy. the next runner was about 5 minutes after him. Then there were more runners. It was good to see the other runs as we wished each other luck and exchanged well dones. 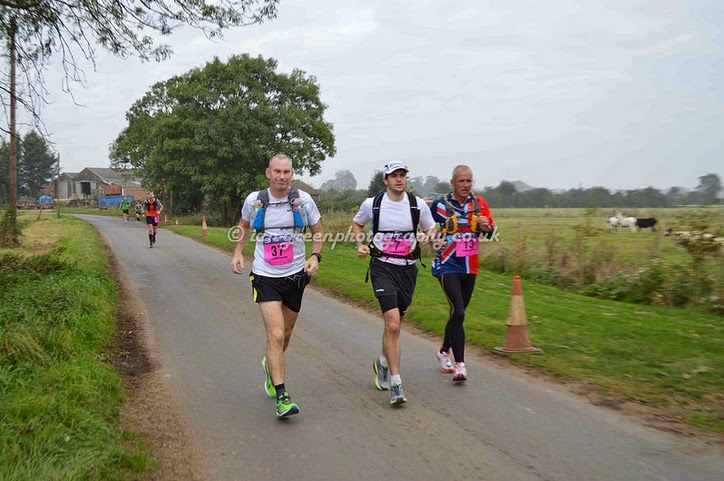 Me, Pete and Rob


We managed to get half way in under 3 hours 30. I changed my socks and t-shirt, while Pete refilled his bladder pack. We ate and chatted to others for 5 minutes and when we set off again were still under the 3.30 mark. I knew we weren't going to go sub 7 hours, in fact I was now worried we may not go sub 8 hours but that was my new target.
We struggled more on the way back but kept each other going with positive things to say. Walking was becoming more frequent after mile 25. The legs were really aching already for some reason. By this time Ironman and Spiderman were nowhere to be seen ahead of us but the Green lantern had dropped back behind us somewhere.
About mile 30 onwards there was hardly anyone to be seen. I thought we had paced quite well and was expecting to pass people who hadn't paced so well. We were obviously the ones who hadn't paced so well.. 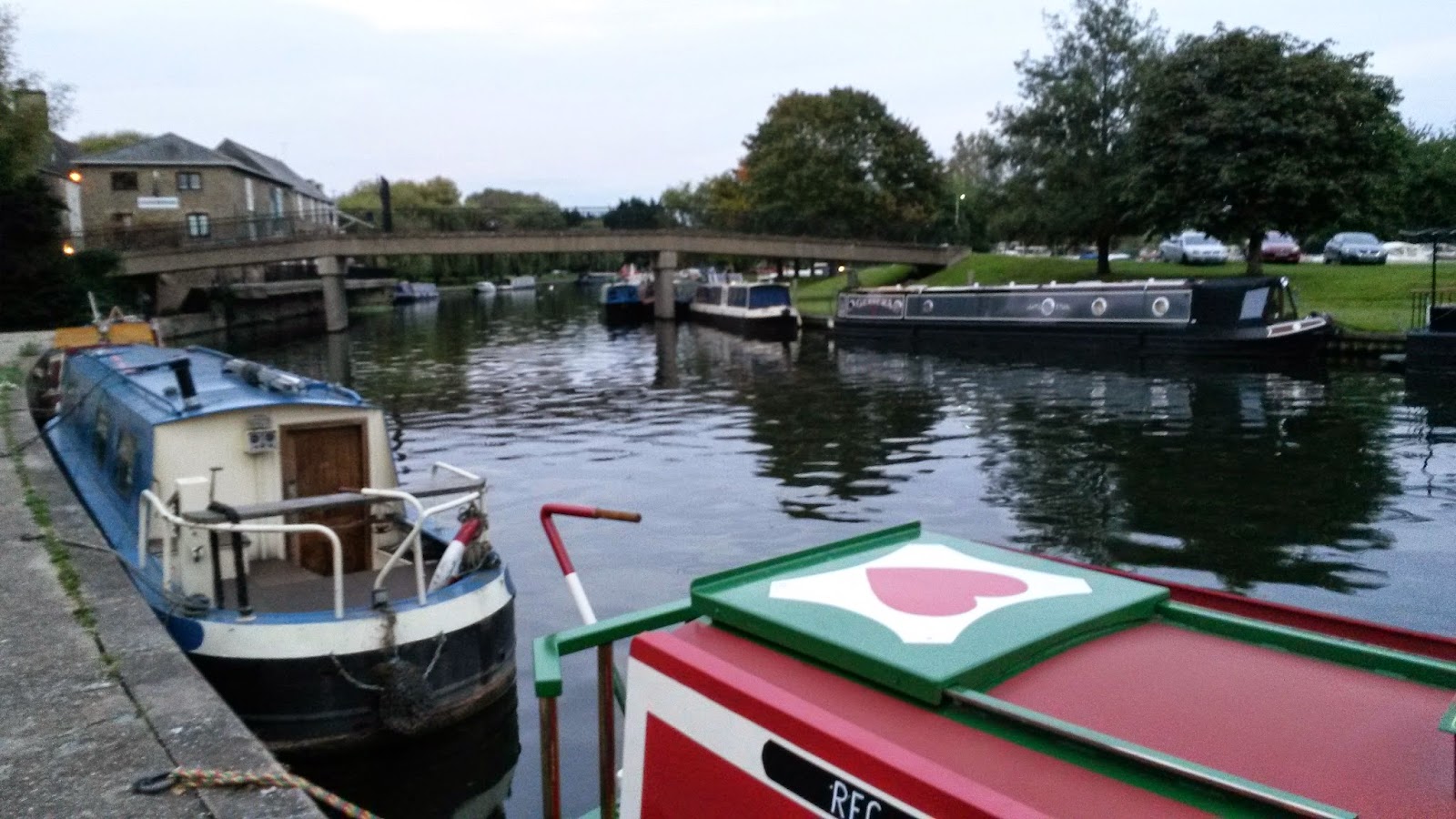 We were told at mile 27 or 28 that this may be the last waterstation. I thought that this was very poor as it was such a humid day and we were consuming lots of fluids. I drank plenty and filled my two bottles. I also made sure I wasn't wasting too much water but it was nice to pour over my face to cool my face down as my body temperature seemed pretty high by this point.
We continued to tick off the miles. We celebrated at Pete's first ever 50K achievement. We cheered and ate some food. We were glad to discover that the final waterstation was still there. There was a lovely old man and a very helpful young girl. They said they weren't going anywhere and would stay until the end of the event. There was a 11 hour cut off time! They must be out there for a good 12 hours volunteering for free. These people are an inspiration to me. I love them especially when they're so happy and accommodating.

Mile 35 and onwards, no-one in sight in front or behind. It was just us two. Few words were being exchanged now as we dragged our tired bodies closer to the finish. The miles were taking longer and feeling much, much longer to reach. I kind of woke up a bit and got a little excited as I pointed out the sight of Ely Cathedral to Pete. It felt like my pace had quickened a little and it looked like we may be able to get under 7 hours 30 if we kept on going and walked less. I don't think Pete was too bothered about the time but I wanted that sub 7.30 so bad now. it gave me a new sense of purpose and another goal.

People had been telling us different mileage. 6 miles to the finish, 5 miles to the finish etc..
We just didn't know. Was it 40, 41 or 42 miles? We managed to navigate pretty well between the two of us and didn't get lost. The Cathedral seemed to be getting further away as we ran on twisting tow paths. Eventually it was getting closer and bigger. I told Pete we were going to get under 7.30 if we pushed a bit. We ran through and under the Cathedral and into the finish together with a round of a applause from everyone there. 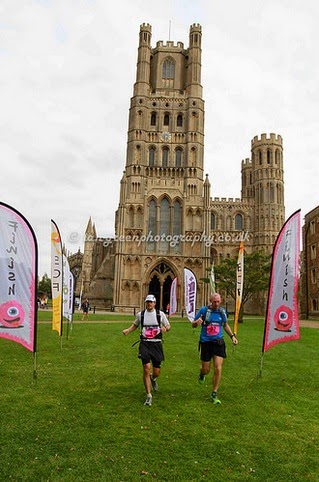 We congratulated one another with our time of 7 hours and 27 minutes, Grabbed drinks, goody bags and medals and laid upon the grass gasping for air and gaining relief. We applauded others coming in and enjoyed the much welcomed rest and conversation of others too. Great race and lovely people. 51 people managed to finish but one of them had to be rushed to hospital with chest pains.
I came 23rd and Pete 24th and I still had 2 uneaten pork pies in my backpack! The winner easily got a sub 5 and I watched the last person coming in after my pub meal and shower in a time of 10 hours and 32 milnutes. He told me that the previous year that he had DNF'ed due to not making the cut-off time. So much for the raincoat! 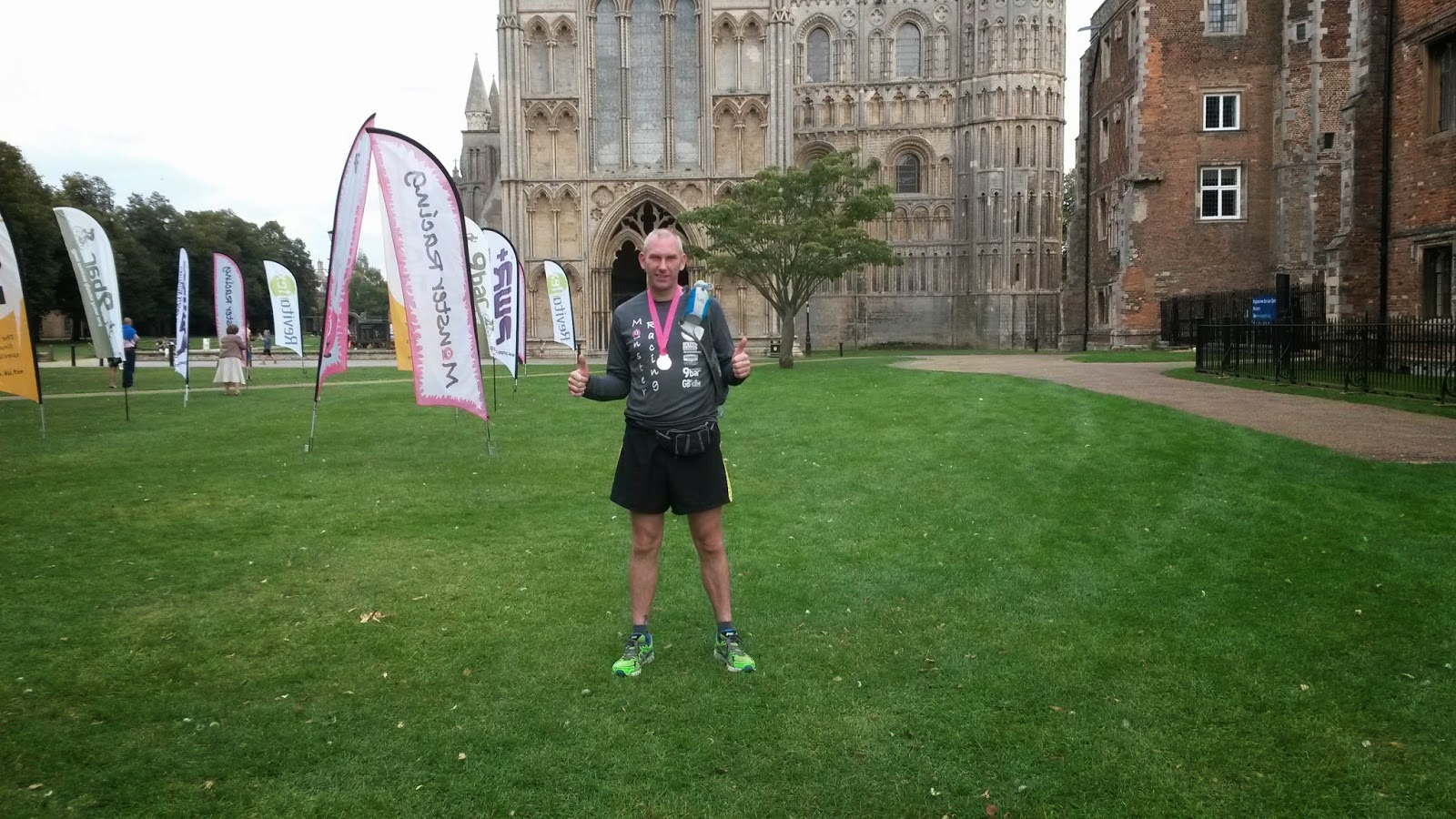