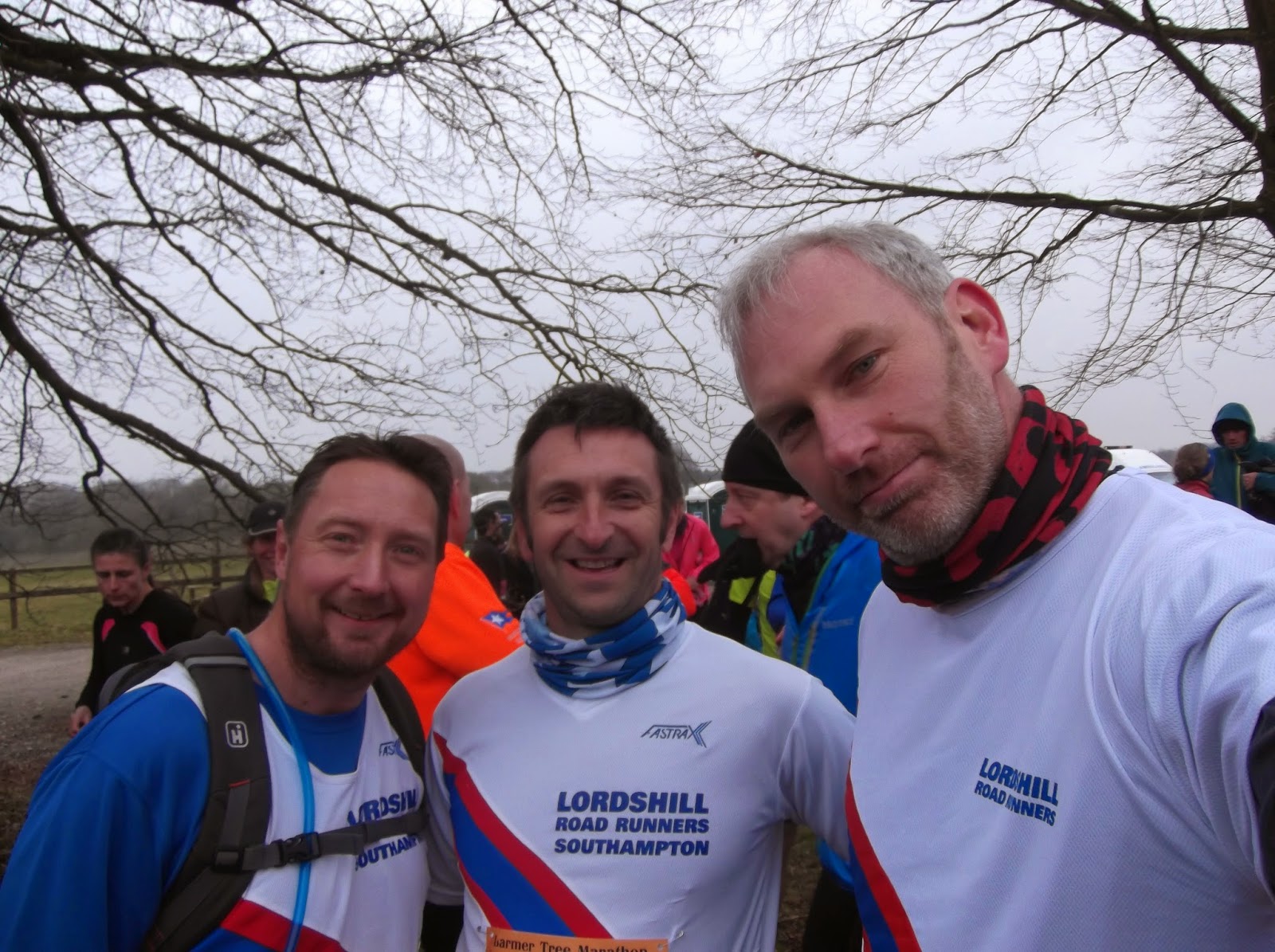 (Chris Lamb, Dean Hatton and myself at the start)

Dean had entered this race for some reason and asked if I wanted to do it. I was easily talked into it as I had done the Ox Ultra last year which was also organised by "White Star running". It was one of the best race experiences that I've ever had, so it was easy to make my mind up with this one. Later on, we managed to talk Chris into it too. We all knew that we wouldn't be racing this hilly, trail marathon. Dean is training for an Ironman and Chris and myself are training for the London marathon. We just thought it would be good to get some miles in our legs and enjoy the beautiful views as well. I also thought it would be a good idea to cycle 40 miles around the new forest on my crappy mountain bike the day before.

Dean picked us up and off we went to the Larmer tree marathon. Kind of between Salisbury and Shaftesbury. About an hour's drive from Southampton and there was hardly any traffic on the road. It was an easy journey to make. We got there and it was really cold in the wind. We picked up our race numbers and chip timing thingys and back to the car to sit in the warm again. I managed to snap one of my chip timing bands when I tried to tighten it with my shoe lace. They were those paper chain type chips that go on your trainer except there was no sticky bit to attach them. You had to tie them through your laces. They were really awkward and you needed one on each trainer. We got there in the end though. 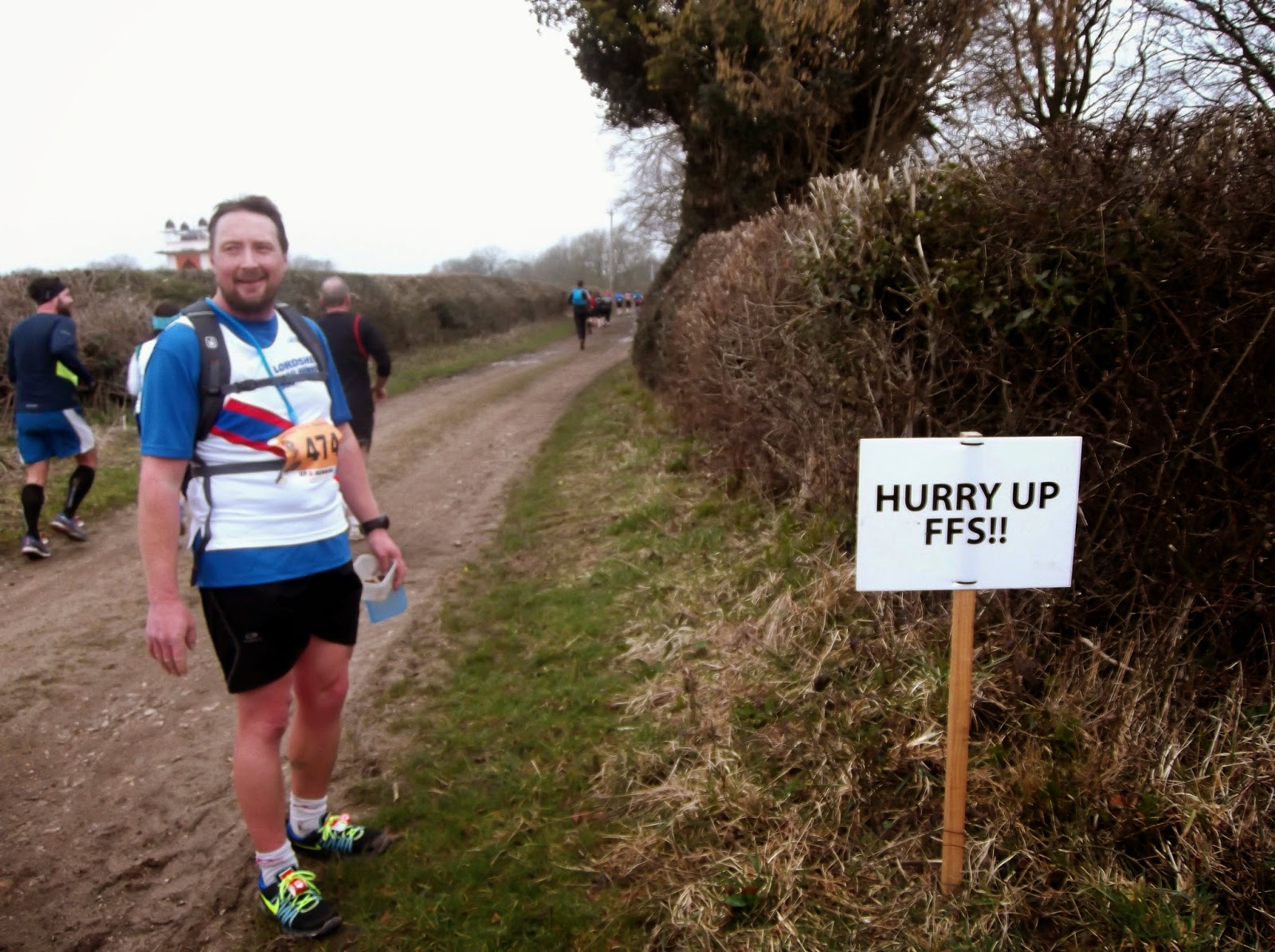 (Chris gets impatient with us slow ones)
On our way to the start, I decide that i'm gonna wear my raincoat as it's so windy and icy cold. Then I see this old guy just stood there in his shorts and vest. It's then I decide to man up and put my coat back in the car. Later on in the race I would chat to this guy and thank him that he made me change my mind as it soon got warmer on the run. He was 57 and had only been running for 4 years. He was also running London Marathon in April and this was his first marathon. He later passed us and beat us as well as Paolo our Filipino friend who was running his third marathon in three weeks. We were making our running club, Lordshill road runners look as bad as we possibly could ;)
Andy the race director/organiser did the race briefing and then we were away. Nice and slowly we ran down a hill and we could see lots of runners ahead and then up a hill and into the woods of the country estate. The most noticeable thing about this race so far was the noise though and it was coming from Chris's rucksack. He'd only gone and put a half full container of nuts and raisins in there. So we had this rhythmic chant as we ran. He got a lot of comments to. Was he a cocktail waiter carrying lots of ice? Had he stolen money from the kids at the church? The best one though was this lady who thought he had travel Scrabble with him. It sounded like the letters were bouncing about it. His nuts were the highlight of many conversations. In the end though, he decided to eat them all in one go as we ran on. 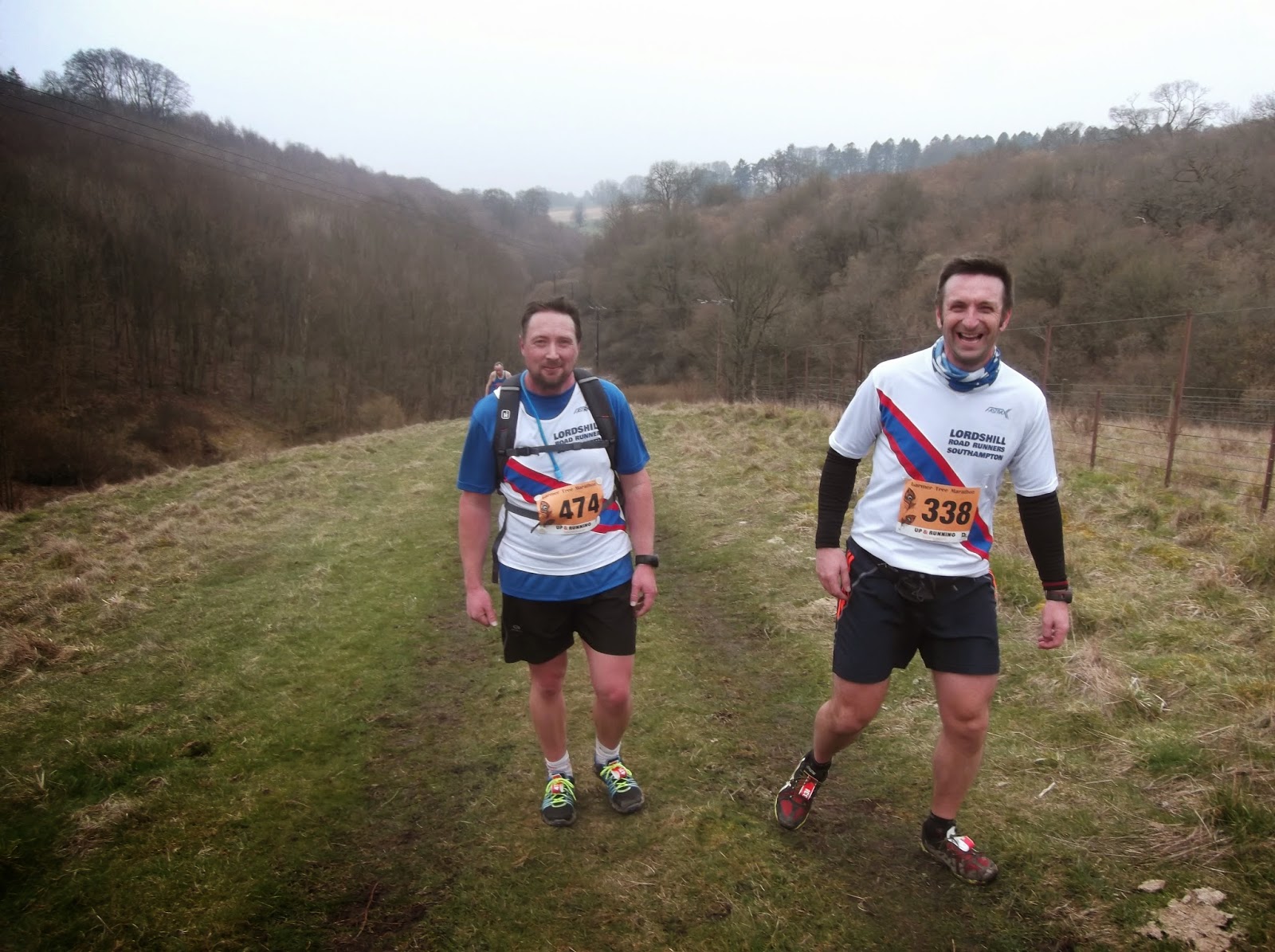 ﻿
(We walked most hills as they were pretty epic!)
The signs on the course were very entertaining. We could see them way ahead and looked forward to reading them. More races need humorous signs! The marshals were equally brilliant. Telling you that you were nearly there at 10 miles and offering you cakes from the boot of their car and chatting/joking with us. They were very spirited and always laughing. Each water station was a real uplifting part of the race. We knew about the Lovestation at mile 20-21 and really looked forward to it. We knew there was cider and vodka there! When are legs were tired, all we thought about was this station. Dean was worried that they were going to be dry as we were taking so long to get around the course. Which then had me worried. I think we picked up the pace a bit after that. 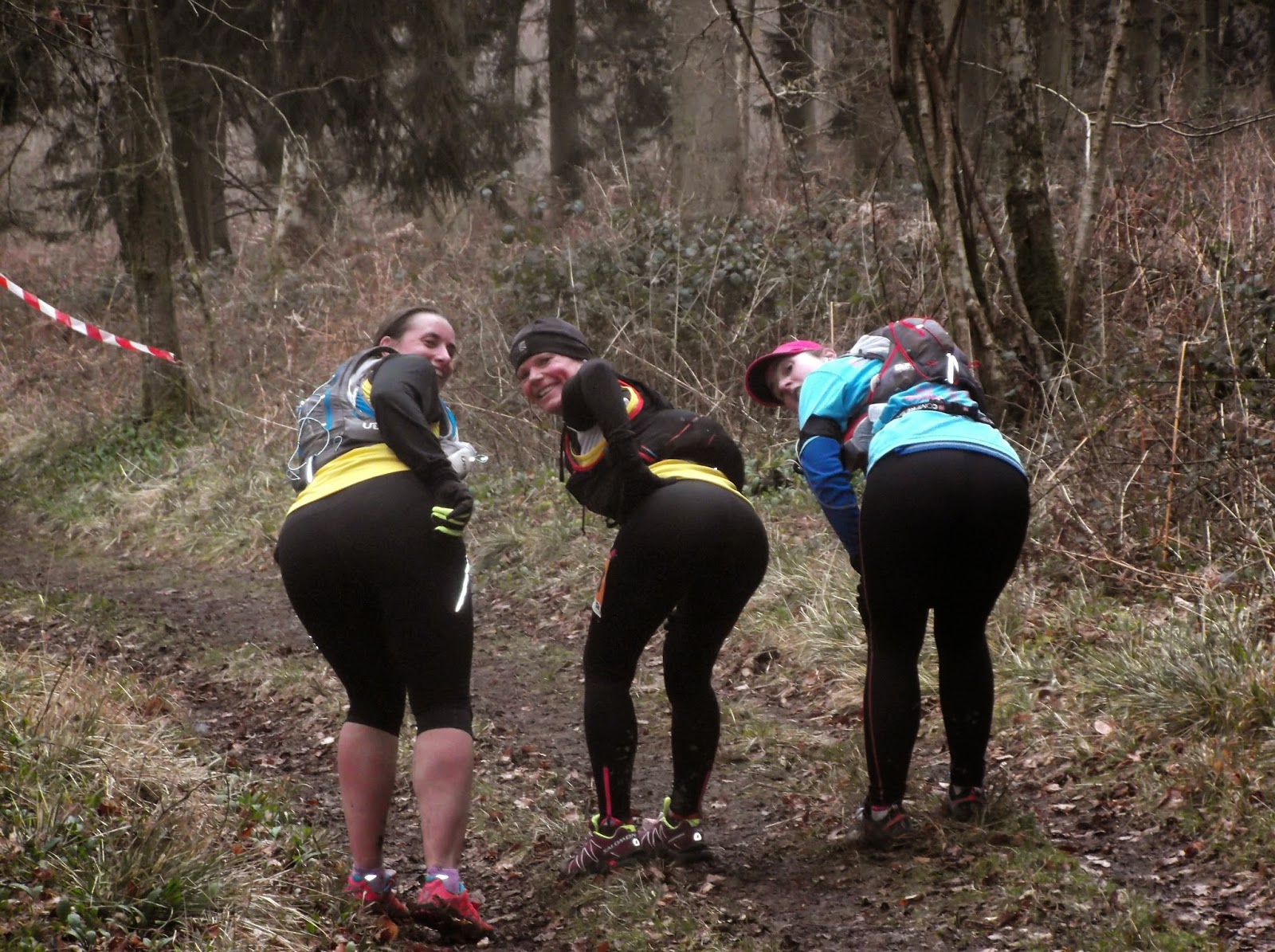 (The ladies offering us another view)
There were lots of nice, friendly people to chat to, laugh with and get along with on the way round. This was becoming more like a stag do than a race. Especially when we finally got to that Lovestation. "Cider" says a lady. "Yes please" we all reply, grinning away like alkies. We had 2 cups of cider and then we get offered a cup of Bucks fizz which we excepted of course and then another lady produces a bottle of Blackberry Vodka. We had some of that too. I was feeling a bit tipsy now and the ladies were offering to rub Vaseline into Chris's thighs..lol. We didn't want to leave but it would be getting dark if we stayed too long. So on we ran. But, with all the booze, scotch eggs, cocktail sausages, cake and everything else I ate along the way... it was all spinning around in my tummy like a washing machine. I wasn't sick though :) 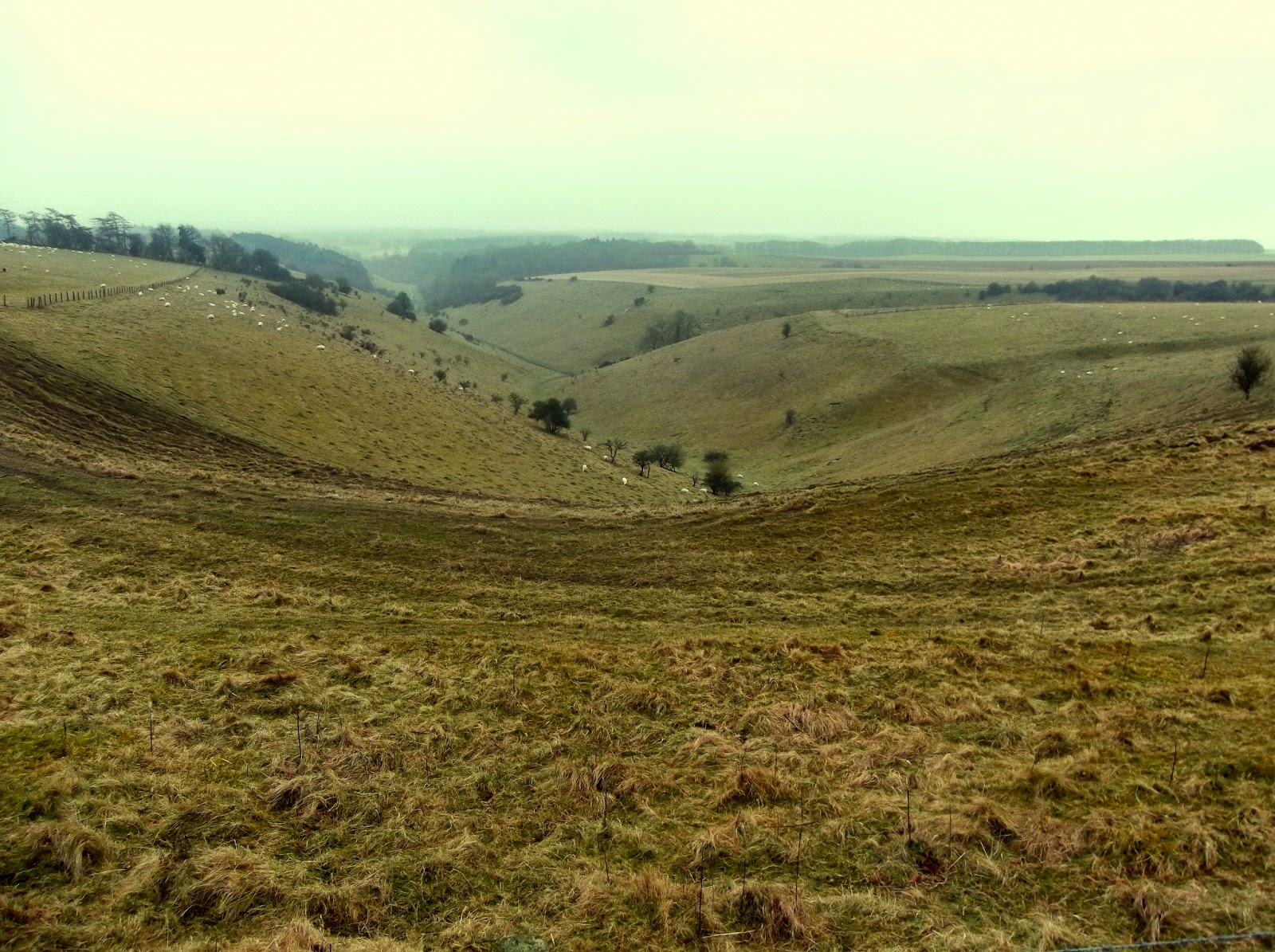 (A beautiful view during the race, near where the Ox race started last year)
I managed to take lots of photos on the way around with my crappy compact camera. They weren't brilliant but it was easy to carry in a bumbag along with 2 gels and my phone that I never used. I put my garmin in trail run mode which I had never used before and the only difference I noticed was that it told you every time you climbed 250ft of Ascent, which happened quite a bit on this course. The final total of ascent was over 2600ft! Snowdonia marathon has about 1000ft more but the three climbs at Snowdonia are gradual. The hills are worse here as they are much steeper as there's more of them. A great, hilly, challenging trail course with lots of different terrain to keep your brain engaged from the roads to the woods and then muddy trails and big hills to climb and some fast hills to fly down. 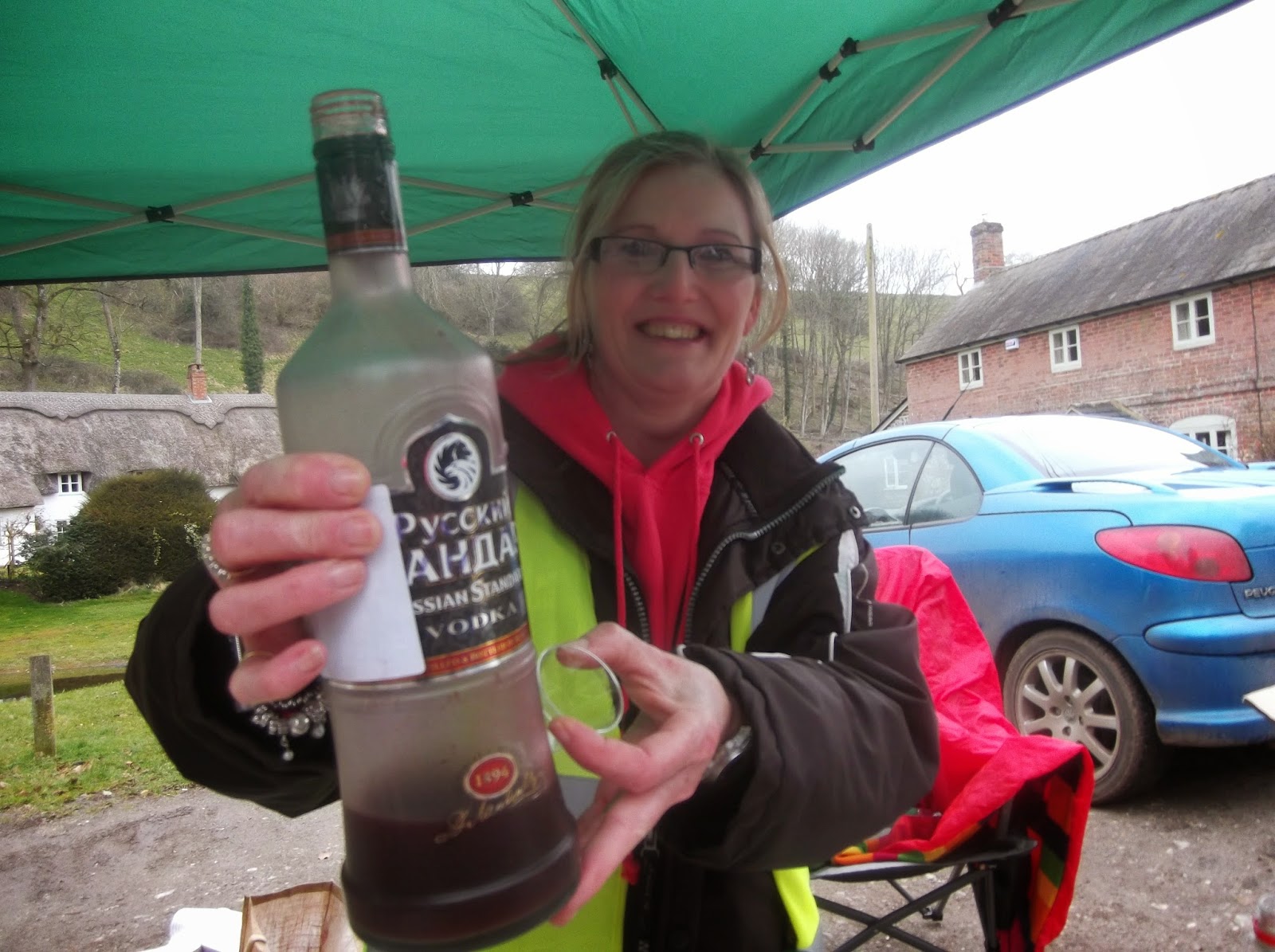 (This lovely lady got us tipsy!)
Anyway, we were near the end and did a loop back the way we came. You couldn't get lost on this course as the signage was brilliant. Just after the first mile we noticed a rope swing but it seemed to late to stop and play as we were in a big crowd of runners and the moment had passed but we didn't realise we would pass it on the return journey. So Dean got on and I took some photos as he was happily swinging around at mile 25. Secretly I wanted the rope to snap but it didn't..lol. We tried a bit more running as we knew we were near the end but it was still hard going. Some of the mud was very tacky, like running on clay. We got there though. Chris ran on ahead while me and Dean walked up the last hill and then ran to the finish line where we could see the clock ticking away. We were hoping for a sub 5 hour marathon as I said I would quit marathons if it took us over 5 hours. it took us 5 hours and 2 minutes. That didn't stop me from entering 2 more marathon when I got home though! 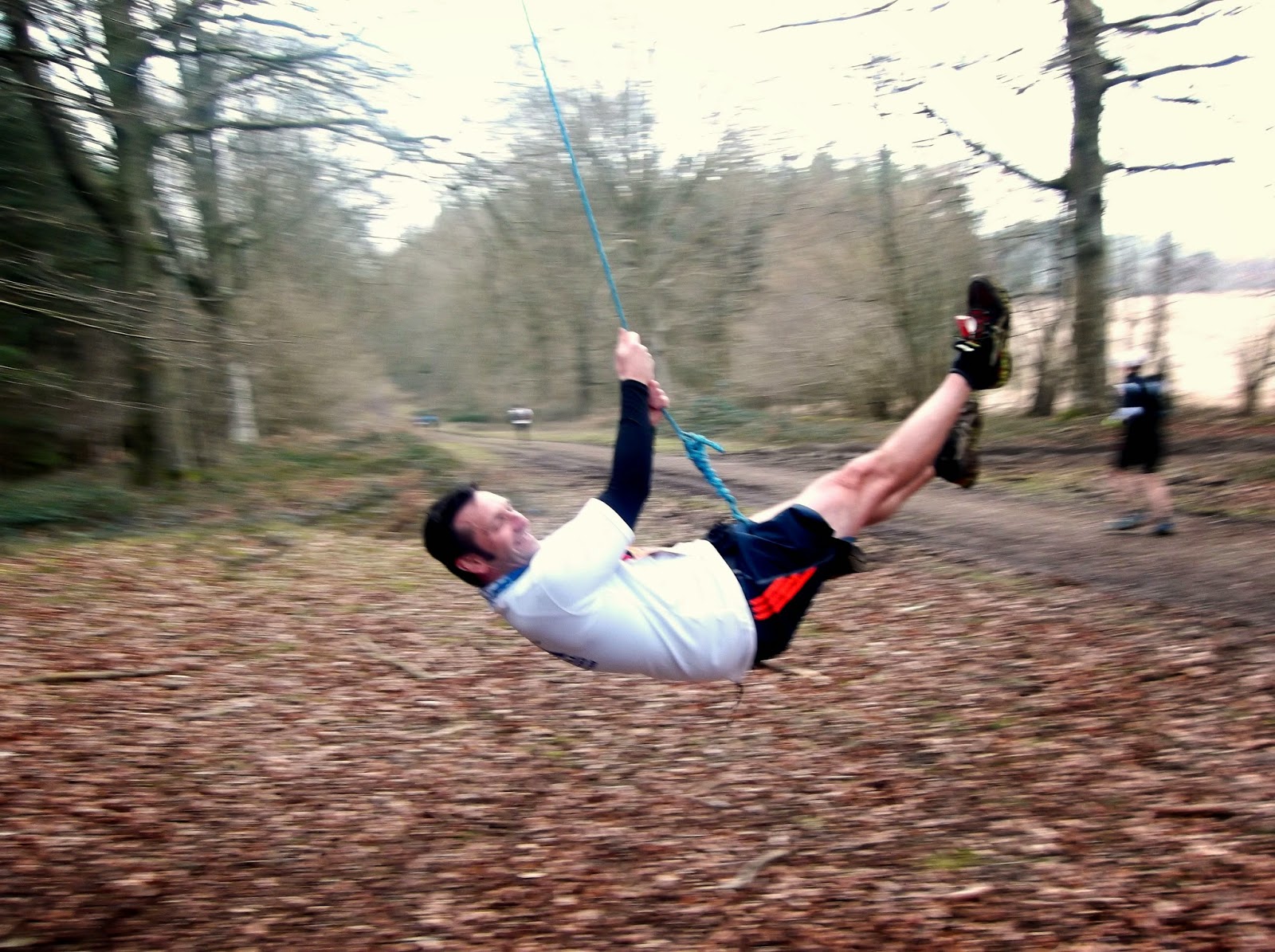 (Dean, the king of the swingers!)
There was a beer waiting for us at the finish line too! There was a mix up with the medals. So we would get our medals in the post at a later date but in the meantime they offered up a free beer or a muff. There was also a free food voucher for a meal when you finished. I wasn't at all bothered about the medal even though they look amazing they just get put in a shoe box with all the rest. I'd still rather have something more useful like a t-shirt or a bottle opener, pint glass etc...
We all went for burgers and a lovely cup of tea/coffee and chatted to our new mate Paolo. We even got to chat to Andy the organiser/director of the race. I joked and said it needed more industrial estate and Dean said a dual carriageway would have been nice. What a lovely guy! We saw a peacock too before we headed off. We were very tired but very happy. I got home and booked up the Giants head marathon straight away which is also another White Star running event. Definitely worth doing this race and reasonably priced unlike so many races nowadays. We'll be back! 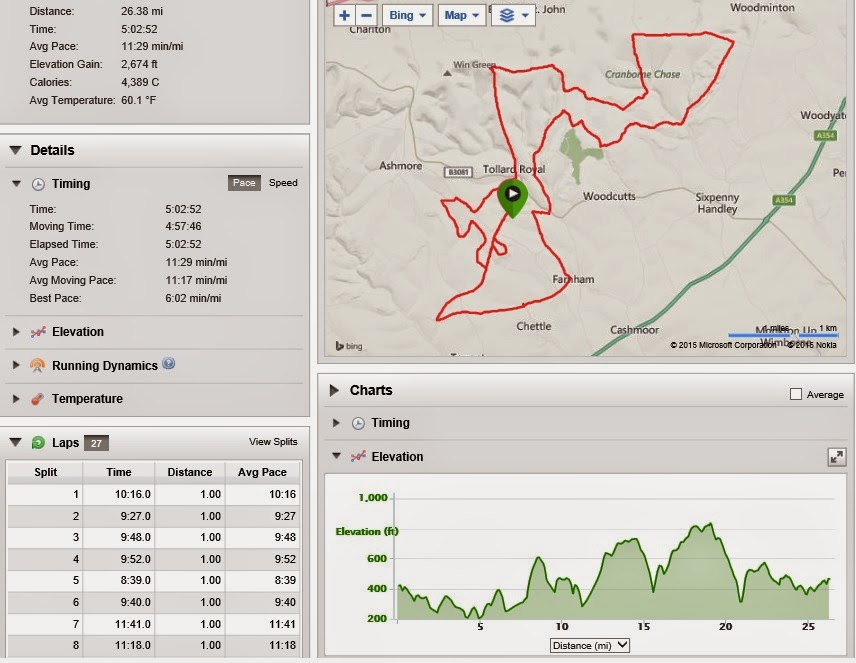 (Check out those hills!) 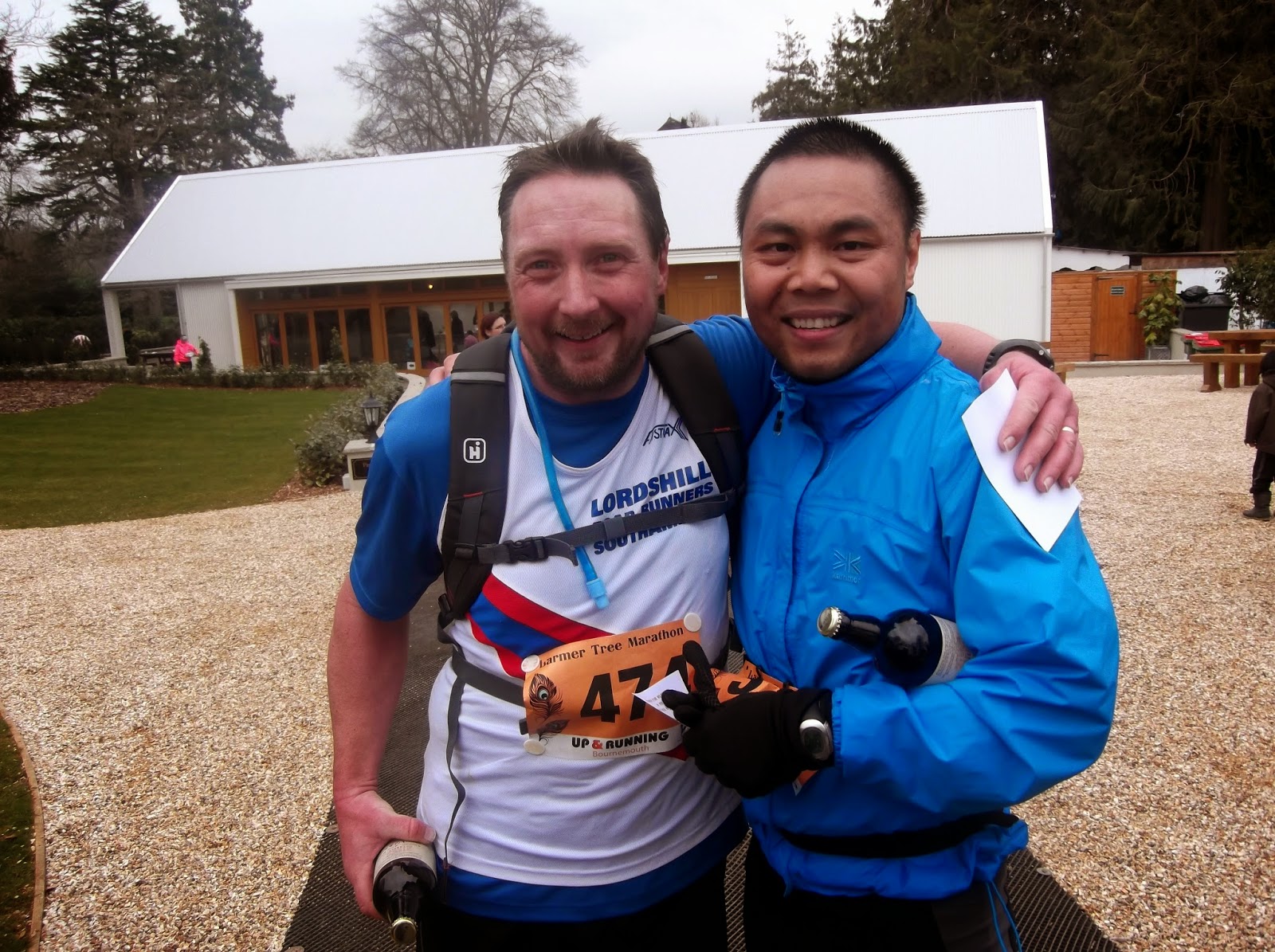