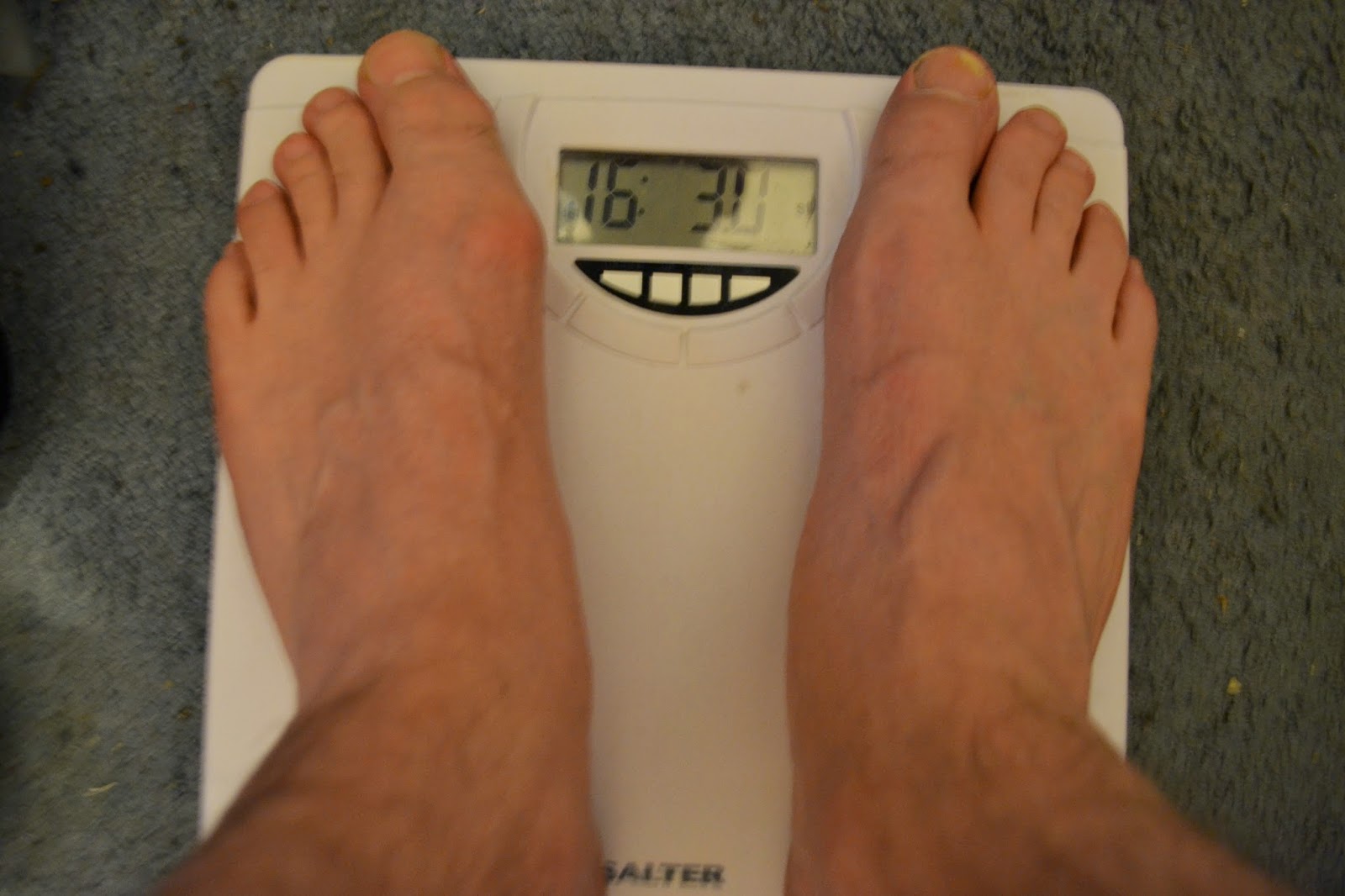 
I guess it happened a while back. My friend Dave Brett told me about this film called "Fat, Sick and Nearly Dead". He said it was a documentary about a guy who tries to lose weight by just juicing. Consuming nothing but fruit and Veg in a liquid form for 60 days! I thought it sounded a bit psychotic to be honest. Anyway, a year or so later I come across that documentary on Netflix. It's a documentary by an Australian guy named "Joe Cross". He was suffering from some ailments and was in a bad way due to excess weight. The documentary was very touching and gave me hope and inspiration.

I had been trying to lose weight since the new year but seemed to be putting it on. Last October I was just under 15 stone and running well. I felt at my fittest when I ran the Great south run and achieved  66 minutes in this 10 mile race. I ran an effortless 10k in 41 minutes during that race and i'll never forget how well and efficiently I ran that day. I wanted that back and also I have the London marathon to train for in April.

Sadly, depression had hit me hard over the winter and the comfort eating took over. I was eating so much junk food everyday and drinking quite a bit of alcohol. I thought I was eating sensibly at the time but it was evident with my weight gain that I wasn't. I was fooled by low fat yoghurts and low calorie cereal bars etc.. 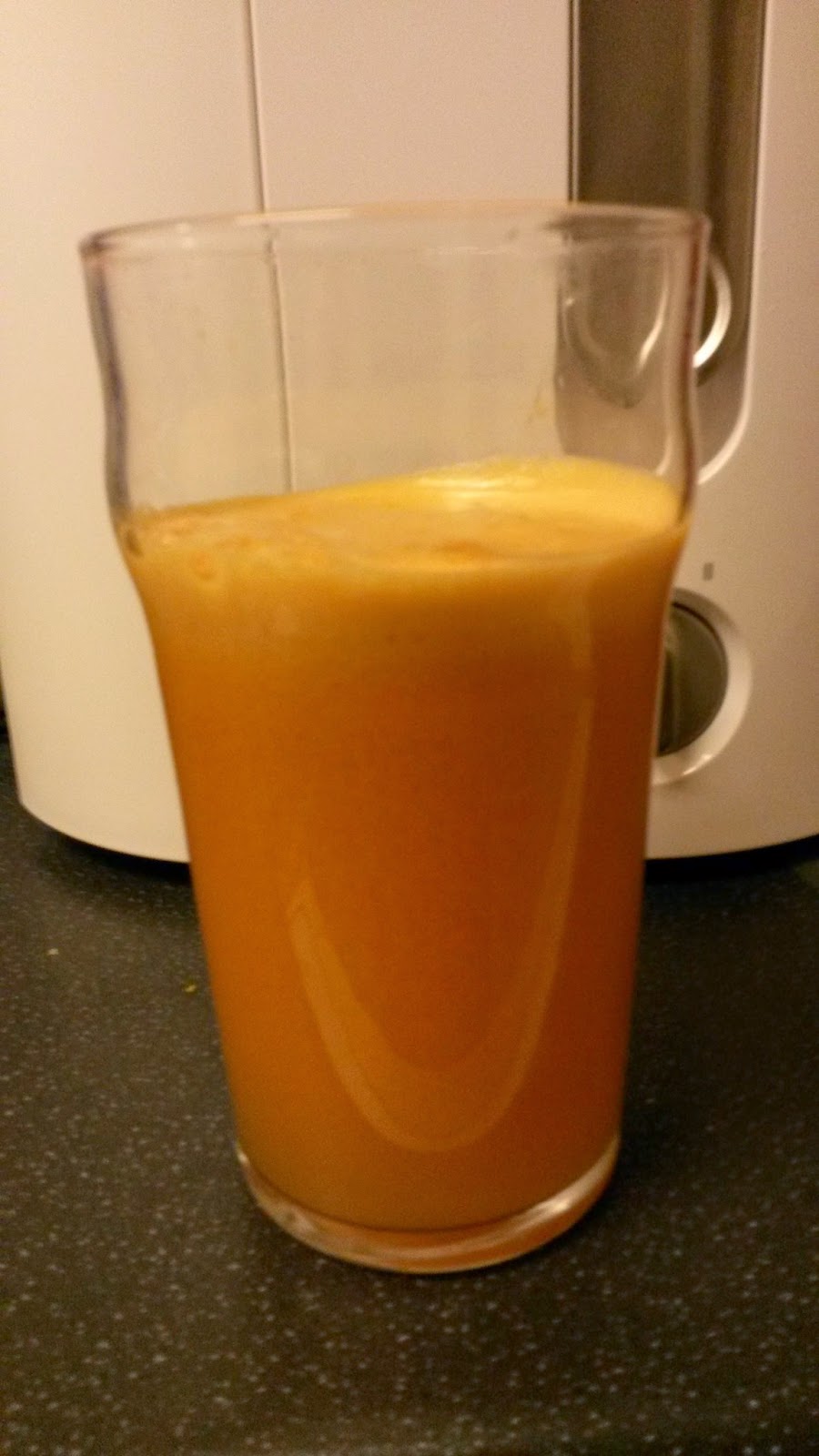 (The first juice I ever made. Carrot-apple-Lemon from the Joe Cross Juice recipes)
After watching the Joe Cross documentary I went into town and bought his book "The reboot with Joe - juice diet". I also purchased a juicer from Argos on the same day. I had done a little bit of research from Joe's website and it said not to buy the cheapest juicer as it will not juice as efficiently and you end up with wet pulp that needs putting in again. The more powerful the wattage the better! I spent £80 on a Braun juicer that was knocked down from £130.
Now, I was reading Joe's book but wanted to try a juice at the same time and prepare for my reboot. I was planning on doing a 10 day reboot. That meant no food for 10 days! Just juices but it also said that you needed to ease yourself into the program by eating just fruit and veg beforehand. Me being me, I couldn't really be bothered with that and the reboot never really started. I just chose recipes I liked the look of and went out and bought the fruit and veg.
I went to the farm shop to buy my stuff because I thought it would be more organic, locally produced and in the meantime supporting the local farmers. It was a bit limited to be honest but I bought what I could from there and then off to Sainsbury afterwards. I was buying stuff that I knew nothing about. This is a guy who lives off pasties, scotch eggs and pork pies! I had never bought things like lemons, ginger, beetroot and celery before. I also knew for a fact that I don't even like Celery or beetroot. I was starting to think I was losing the plot a bit here. Had I been brainwashed?
Anyway, I made my first juice from Joe's book. Carrot-Apple-Lemon. Which uses 4 apples, 4 carrots and 2 lemons and would make 2 servings. I drank the juice and actually thought it was quite nice. I think 1 lemon would have been enough though and it was something that my stomach wasn't used to. I stored the other one in the fridge for breakfast the next morning and had that instead of cereal. 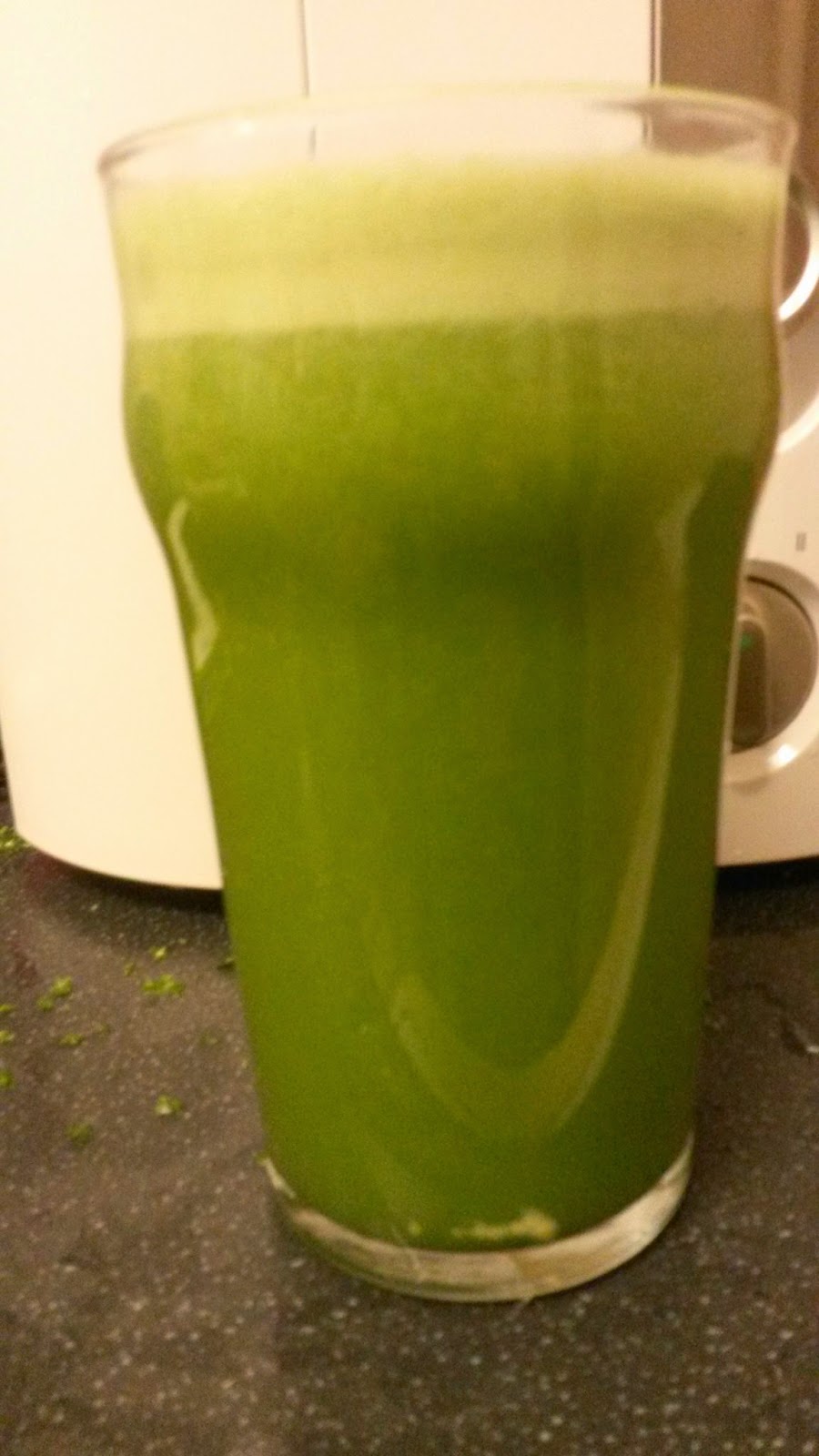 (Joe's mean Green: 2 cucumbers, 8 celery sticks, 4 apples, bag a kale, 1 lemon and 5cms of Ginger)
So, as I was saying... The reboot never really started but what actually happened was that I was juicing once a day and making 2 juices. I would have one then (In the evening) and save the other one for breakfast. That juicer is a pain to clean and takes ages but that's pretty much the only hassle about it. So, I was having juice for breakfast instead of cereal then i'd have a sandwich for my first break at work (Tuna or Ham salad) and then another sandwich and some fruit for lunch at work. Come home and juice again. Sometimes I would have toast and peanut butter or more fruit if I was still hungry.
Even though I was still eating I could feel myself getting weak and grumpy. I was tired and lethargic at work and would sometimes nap as soon as I got home. I was getting headaches and dizzy spells too. I read this may happen in the book though. My body was not used to all these nutrients and craved sugar and junk food. I ended up coming down with a cold on the first few days and I was cold all the time. I later read that feeling cold all the time was another symptom of the detox. It was weird!I only did this for 4 and a half days and then my friend Craig was down from Cornwall for the weekend so we got drunk and ate crap food all weekend. However, I had already gone from 16 stone 3 to 15 stone 4 in 5 days! That's a loss of 13 lbs. Incredible! 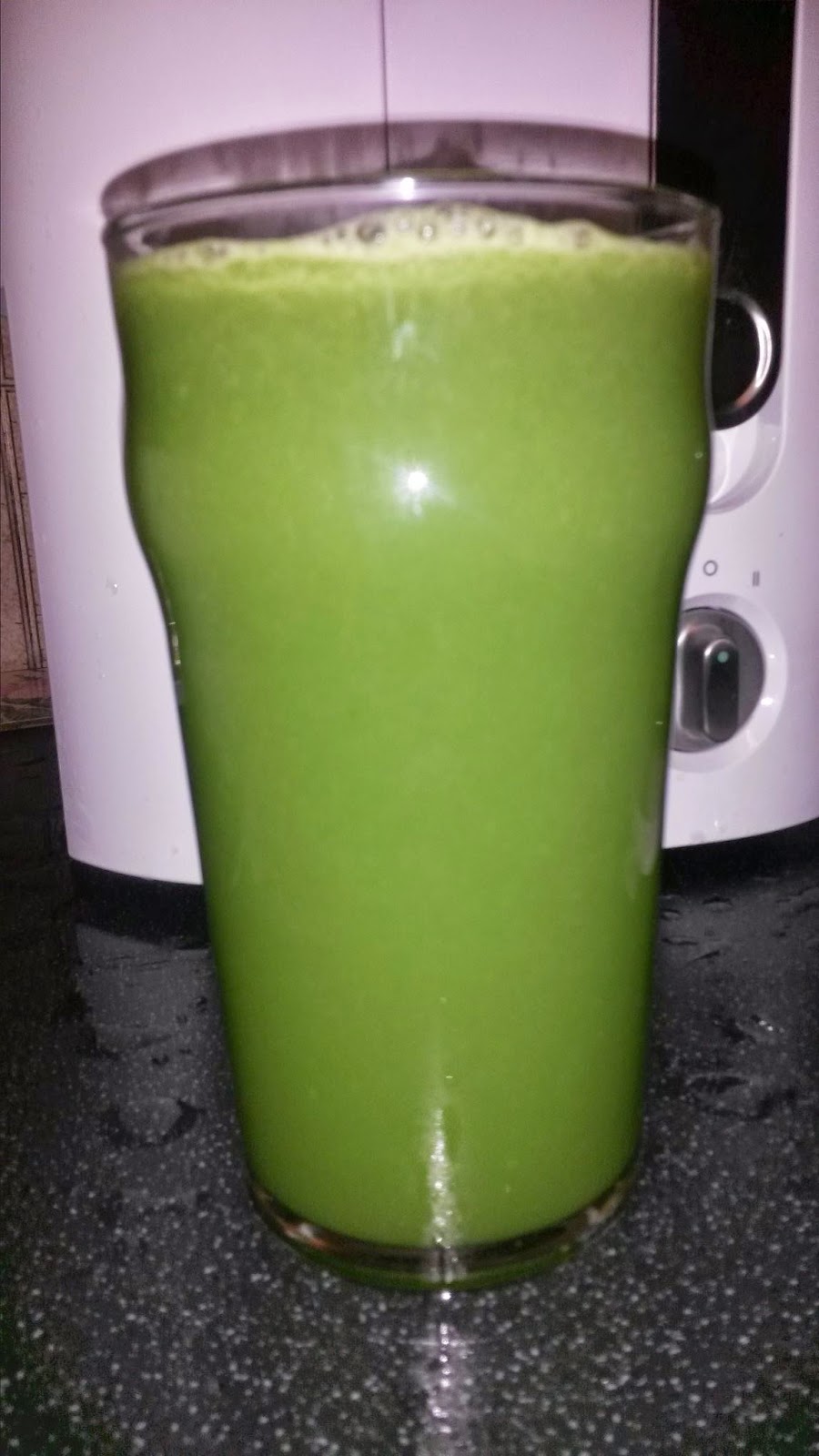 ﻿
(Celery-Pear-Cucumber: Bag of Kale, 2 Cucumbers, 6 celery sticks and 2 pears)
Monday soon came around and the guilt of the weekend had caught up with me. So it was back to the juicing. This week though I felt better. I was a little bit hungry to start with but there were no headaches or dizzy spells. It was much easier this week. I just followed the same pattern as the week before. Juice for breakfast, sandwiches and fruit at work followed by juice and a snack at home.
Today was my last day of juicing before the weekend. I made another new recipe. There are lots to choose from in the book or they are easily obtainable online for free. Today's juice was called "Sunrise" which contains 3 beetroots, 8 carrots and 3 oranges. It was a little bit sweeter than I had imagined actually. I hate beetroot but it was fine in a juice. Although I have been urinating a sea of red all day! This is also something new to me.
I am now off the juicing for the weekend again as I need to carb load for my marathon on Sunday and will need Protein for my recovery which the juices will not produce enough of. 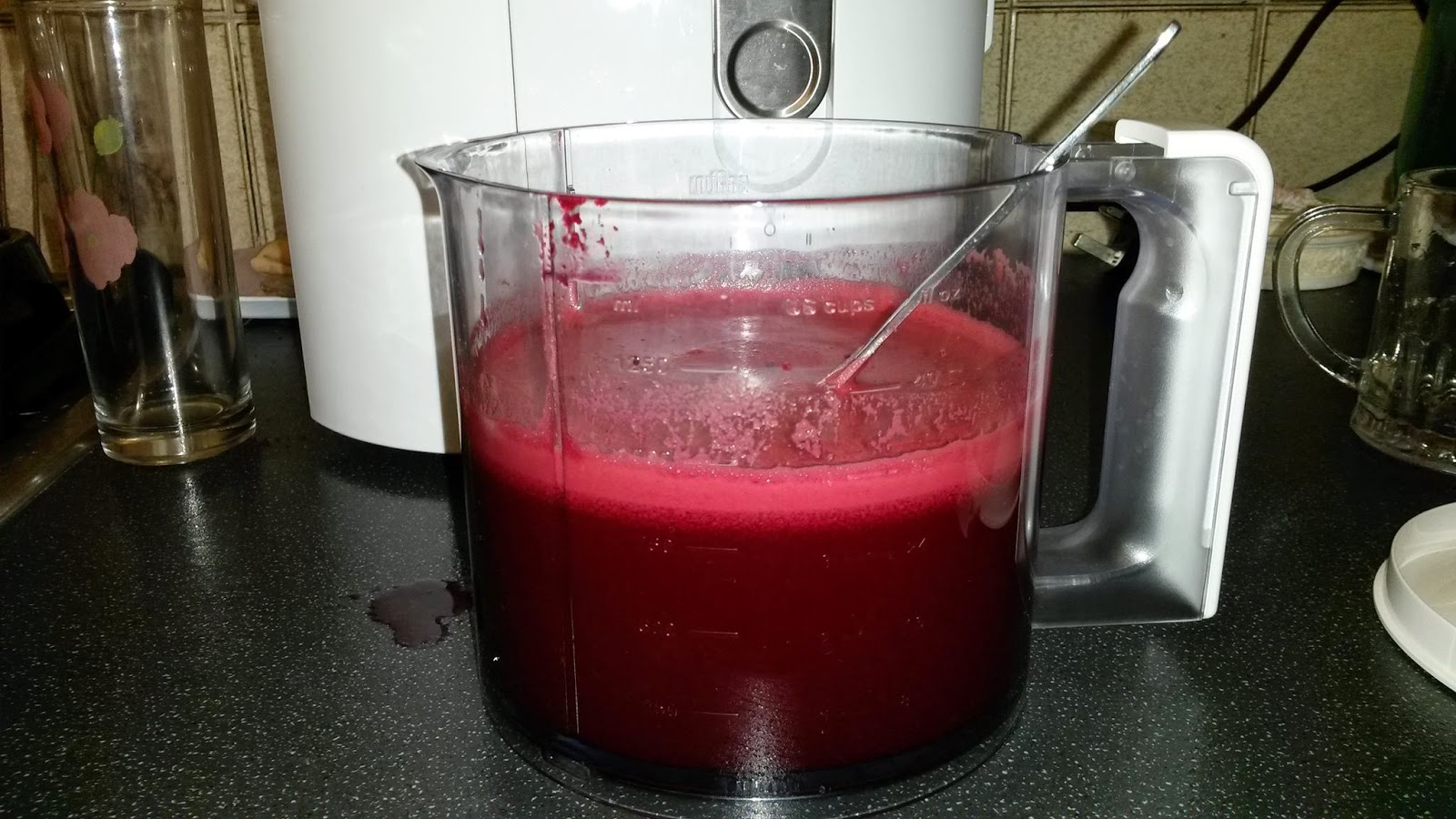 ﻿
(Today's juice: Sunrise)
I will be back on the juices again on Tuesday and i'm still enjoying them. I would love to get down to somewhere between 14 stone and 14 and a half stone as I believe this will benefit my running and skateboarding. London marathon isn't far away now either.
Anyway, maybe this is a fad for me but it seems to be working and I am actually enjoying it now. I don't do anything that I don't enjoy! So, on Monday the 2nd of March I was 16 stone 3 and today (13th of March) I weighed in at 14 stone 13! A weight loss of 18lbs with only 8-9 days of juicing. I know the hard bit will be to keep this weight off me but i'm still gonna have that Cheese or Chicken burger after my marathon on Sunday with a couple of pints of real ale ;) 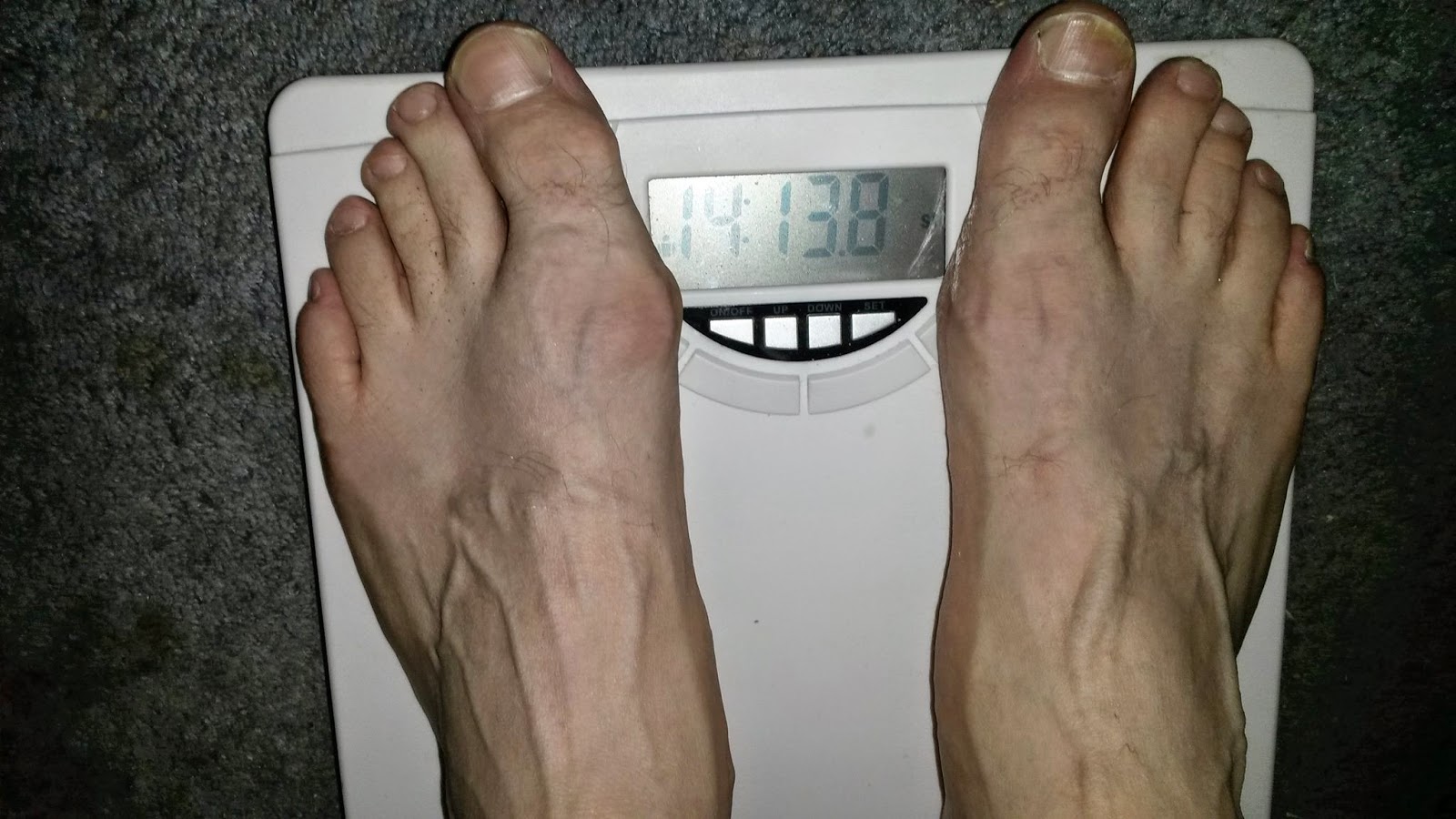