The Bodmin Half Marathon 2016 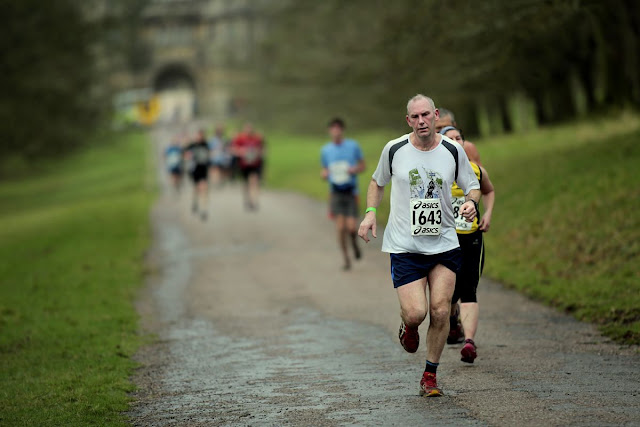 So, I had always wanted to do the Bodmin half marathon. I would love to do all the Cornish races. I love the races and I love the people. So friendly and welcoming. So far I had done The Stormforce 10, Indian Queens half and the Cubert 5. These races were all amazing. When the locals tell you the course is pretty flat, it usually means it's bloody hilly! Anyway, I had talked Di, Mike and Larry into this race. I knew nothing about it but later the course and it's wonderful elevation emerged online. It was a new course this year due to property issues. The course starts at Bodmin college and heads through the National Trust's Lanhydrock.

I am currently training for the Plymouth half marathon and I thought this would be a nice warm up race. This would have been the furthest I had run this year. The previous week I had run 9 miles to Netley parkrun in the wind and rain and did the parkrun totalling 12.1 miles. I was expecting a lot of mud, rain, wind and off road. Boy, was I wrong!

We did Exeter parkrun the day before which was a nice course but challenging when it went through the woods and around a field and on the way back we had the wind against us. I struggled due to a hangover but loved it and the support was fab. You have to take your finish tokens into this climbing place. Take your shoes off at the door, walk up a couple of flights of stairs and queue to get into this room where people were sat at a desk ready to scan your barcodes. A bit of a weird one, but adds to the uniqueness of parkrun. 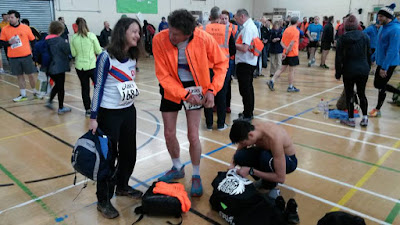 Anyway. We got to Bodmin college and collected our numbers and bright Orange t-shirts. Di and myself did a brief warm up in some cold drizzle. The race started just after 10. They did say that things are a bit more relaxed in Cornwall and that the races rarely start on time ;) Me and Mikey started quite far back with Di just up ahead and Larry at the front of course. I wasn't race fit and I thought I wasn't going to race either. Just plod around and get the miles in and enjoy the route. It was a congested start and no chip time. So I was surprised to run a sub 8 on the first mile. There was an uphill climb straight away and then a springy bridge but not long after there was a massive downhill where I passed Di. I hadn't run down a massive hill like this for a while and I pretty much ran flat out..lol. I then thought that i'd better slow down or else I wouldn't even make it halfway.
I remember the race director telling us that there was a 5 minute delay for the people running with dogs. Well, only 5K in and I was being passed by the first runner with his dog. I thought I was running pretty well though but it was bloody hot. The sun was coming out and I had a long sleeve t-shirt under my short sleeve t-shirt. I wanted to take it off but couldn't be bothered to do it.
We ran through the grounds of Lanhydrock and the support was great. Plenty of water stations too. We got to a climb and then I noticed a man taking his base later off. I decided to join him and do the same while we chatted about how warm it was. Bloody runners, always complaining about something! I carried the t-shirt and used it as a towel to dry my face and head. This was a big climb and we had to do this loop twice! I knew this because of the mile markers. 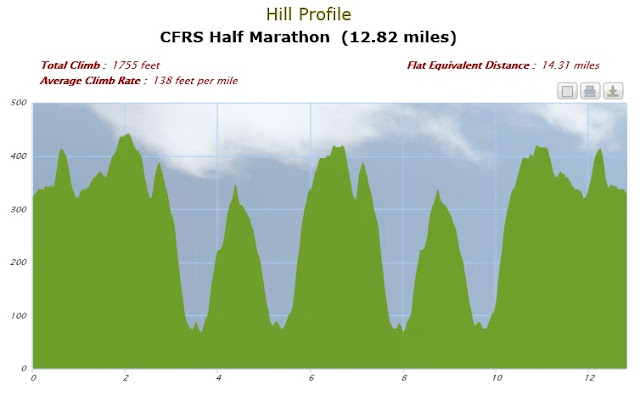 The second dog now passes me. Although, I didn't know it was a dog. I thought it was an old man panting heavily behind me, not realising the man and his dog wanted to pass. I said sorry and moved over. There was a really nice part that was flat and you ran next to a river in the woods. You then crossed a road and then the biggest climb came. I walked up this because it was too muddy for my road shoes. I was actually holding onto tree branches to keep my grip as I pulled myself up the hill. All this had to be done again too! How cruel. When we ran back into Lanhydrock I decided to dump my long sleeve t-shirt in the bin at the water station. I may have had to run 42 miles to get that t-shirt but I didn't like it anyway, plus I had plenty more running T's.
After 6.5 miles I felt like I was ready to quit. I was really struggling. My legs were aching so much and I felt tired. I knew I was unfit but this was ridiculous. I pushed the negativity to one side and kept on pushing thinking that Di was going to catch me up soon. That was all the motivation I needed ;) Then another dog passed me, cocked his leg against a tree, did a wee and ran off before I even got near him again. I had to laugh and see the funny side. I got speaking to a few people.
The thing with these hilly races is that runners have different techniques. I am a fast downhiller and crap uphill. Some runners run the whole thing but at a slower pace. So there were runners that I kept on passing downhill and then they would pass me when I was walking uphill. I even got to chat to a few of them at the end to. 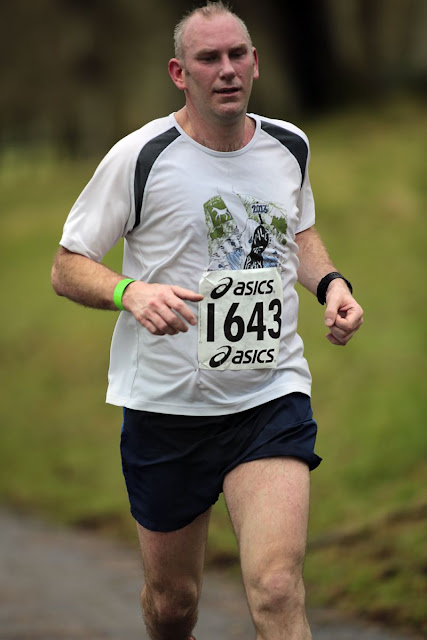 We came onto the second loop and I said to Super girl and Spiderman that I didn't like the fact that we knew what was to come. Super girl said "Well, I think, Better the devil you know". I told her that I liked her view much better than mine as it was a lot more positive. We got talking to them at the end of the race and it turns out that they're from Shirley Avenue in Southampton! Small world huh? Anyway, I had a game plan for this loop. I would run like hell on the downhill before the horrific climb with the tree grabbing. I actually ran a mile in 6 mins 24 secs. but the climb just after was my slowest mile in 11 mins 34 secs. That was the last biggish hill done. I almost forgot! After your first loop they hand you a magnetic wristband to wear so they know to redirect you towards the finish next time around. Back through Lanhydrock and towards the college with some nice downhill.

This was a great race. I loved it. Great support and plenty of water stations and friendly faces. A lot of people said they wouldn't do it again as it was so tough. I felt like I put my body through a lot and I raced much harder than I thought I would.. It was my first race of 2016 and I was on a runner's high for days after this race. Although blasting down those hills meant I had painful quads when it came to sitting on the toilet or walking downstairs. Like I said, not quite race fit yet ;)
I managed to pour some water over Larry's head while he was getting a massage and the massage lady told me off but it was worth it. Larry had done an amazing 1 hour 38 mins. You know it's a tough course when the winning time is 1 hour and 21 mins! Di and Mike were 5 mins behind me with Mikey narrowly beating his wife (but not like James Brown did). We had a lovely pasty before hitting Jamaica Inn for beer! A great day was had :D 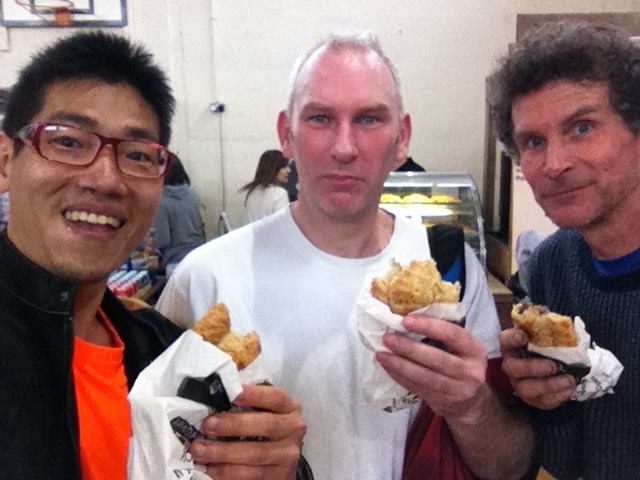