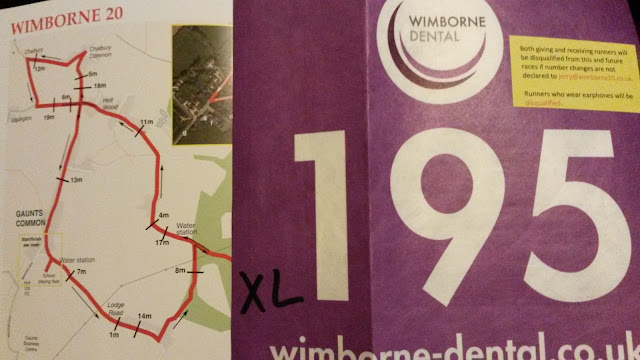 After enjoying the Wimborne 10 so much in November, it would be silly not to enter the Wimborne 20 in 2016. Great Spring marathon training and at a bargain of £13! Yes, 20 miles for £13.
Anyways, I entered and sorted out a lift with Rob Benham who had also entered. When he picked me up on the day there were sheets of ice outside on the car park floor. It was bloody freezing!

Rob drove us there and we chatted all the way and occasionally got lost through lapse of concentration. We had plenty of time though and the place was easily found. We already had our race numbers in the post so we just sat in the car to keep warm until nearer the race start time. The start was delayed due to queues for the toilets. I was relieved in both senses of the word as I was in one of these queues. I wasn't feeling great to be honest. The previous couple of days I had been going to the toilet a lot and getting dizzy spells. Food poisoning or a stomach bug perhaps. Either way I felt uneasy about racing. I managed to stuff some toilet paper in with my Minion's Haribo on my waist belt. 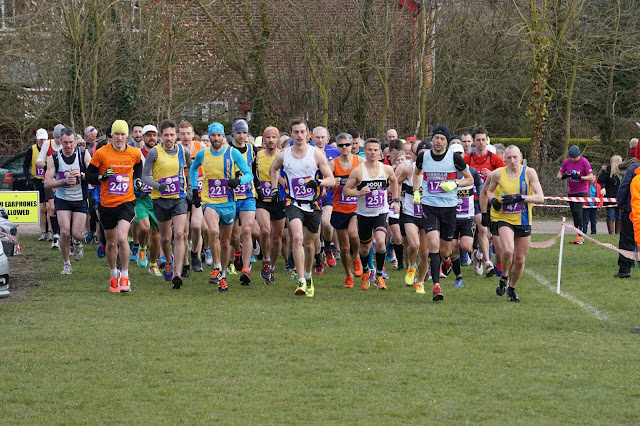 More importantly, what sort of pace would I run today. I haven't really trained to race a 20 miler. I was thinking 8 minute miles or trying to run sub 8's all the way around. Was I fit enough or would I blow up and have to run 9 minute miles after the first 10 miles? It was too hard to say.
Anyways, we were off. We ran round a little school field and then we were out onto the country lanes. The weather was perfect now and not too cold. It wasn't long into the race that I realised that you couldn't really average the time of each mile because of the undulations. I thought there was just one hill. That's what it looked like on the profile picture to me.
By the way, this is a course made up of 3 loops. So you kind of ran 3 loops of 6.5 miles with a bit extra at the start and finish.

Bloody hell this was pretty hilly. I was running sub 8's though, so all was good. My breathing was a bit heavy so I tried to relax a bit more and settle into a rhythm. I was just trying to get to the first 5 miles and then the first loop or 10k. I worked out that I roughly needed to run 3 x 50 minute 10k's. Not sure if that sounds good or not..lol. The marshals on this race were the best! They were all smiling and genuinely shouting words of encouragement and comments of humour. They were incredible and it really made the race very special. I would see all these people 3 times at least :) 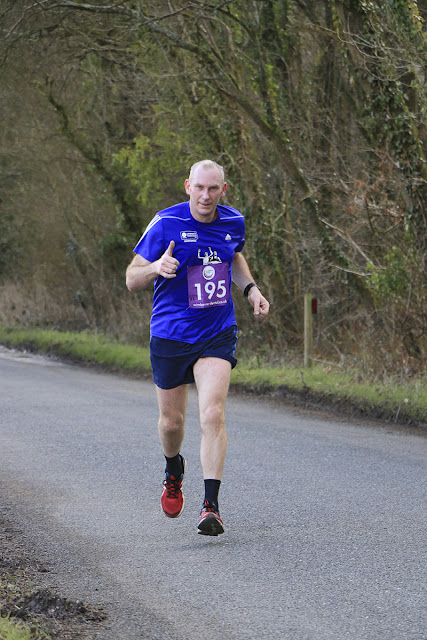 So this first loop finally came around which seemed like forever and then I was happy to recognise where I was again. That first loop had at least 3 pretty big hill climbs. One of them seemed to go on for ages twisting around a corner to the peak and then you got a nice fast downhill. Thank god for the guy standing over the cattle grid. Every loop he directed me to the side of the road as I kept on forgetting it was even there. I thanked everyone I could and even joked with one marshal that I was sad to be on my last loop. This comment came back and shot me in the ass a few miles later as I was suffering after mile 16. Anyways, i'm jumping all over the place with these race details.

Another great thing about this race is that there were out and back sections too, so that meant that you got to pass other runners and smile, wave, thumbs up or whatever. I managed to high 5 Rob as he flew by on the last lap. He must have been at least 2 miles ahead of me. He was in good form and would be great for VLM. I was doing okay but cursed myself a bit when I ran a mile in 8.15. My first mile over 8 minutes. It was getting tougher from mile 11 but I still had the belief in me. I wasn't tired yet but I was slowing a little. 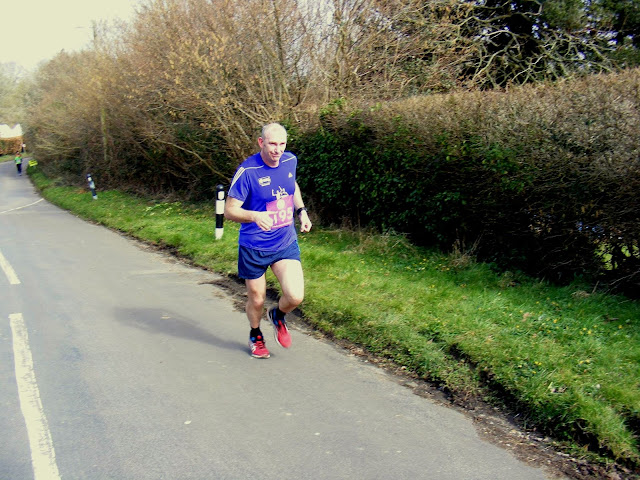 I was nearing the end of my second loop in the picture above. There was lots of support here and I managed to get a high 5 from White star running Director Andy Palmer. Was great to see and chat to a familiar face. I had decided against energy gels and thought i'd just try the Minion's Haribo I bought from my local shop for 50p. I had one near the end of my first loop and then I was umming and arring when to have another. I told myself to live a little and had a second Haribo at mile 10 and then a third one at mile 14. The plan was not to eat them when running uphill as past experience tells me that it's much harder to chew and breathe when you are on a hill! Anyways, I had a total of 4 Haribo and 2 jelly babies from a young marshal at a water station. There were plenty of water stations too. Did I mention that this race was only £13! Crazy value for money. 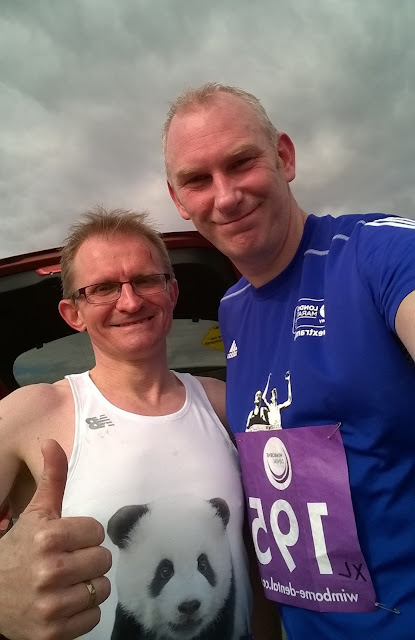 When the lady marshal shouted and smiled "Only one parkrun to go". I smiled back but knew I was in a world of pain and it was time to dig deep. Just then, this young dude called Dave rocks up. He spoke a lot and when we ran uphill he was still chatting while I concentrated on my breathing. I was struggling to run the sub 8's now but pushed on with determination. In about one mile I got to know Dave. He had only started running at Xmas. He was doing the London marathon. This was his first 20 mile race. He beat me by 44 seconds and he runs for Lychett Manor Striders. He was a lovely guy though and his enthusiasm reminded me of when I started running. I gave him lots of marathon advice though and he was very grateful for it. I don't think he needed it to be honest. It was great to chat to someone near the end when I was struggling so much. He sure kept me going until the end. I was glad of his company and I was happy to let him keep talking but on the last mile I told him to push on. I knew we were both going to achieve our sub 2 hour 40 target so I was really pleased. 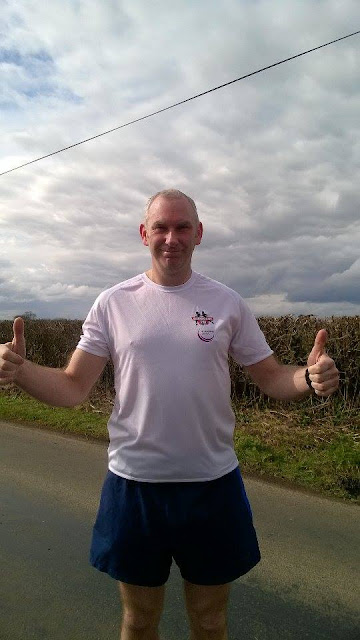 I could see the signs... 400 metres to go... 200 metres to go... Then this spectator says "Right, go for it, may as well sprint this last bit". I just laughed and turned my head back and said "I thought I was sprinting!" I could see the finish clock and the other finishers. Dave had already finished and there was no-one behind me for 30 seconds. I crossed the line in 66th place in a time of 2 hrs 37 mins and 00 secs. I had a wonderful time! And then it was time to collect my race t-shirt. I had put down for an "XL T-shirt". "I'm sorry, we don't do XL t-shirts". That made me a bit angry. Anways, I am wearing it in the pic above and breathing in. I know it'll shrink a bit after one wash and i'll be using it as a rag to clean by bike but apart from that it was a brilliant race and very well organised with the friendliest marshals of any race I have ever done. I would happily do this race again. Rob finished in 38th place with a time of 2 hrs 21 mins and some secs. Beating me by over 15 minutes. It's not a race Rob..lol. Rob also said that he felt the loops quite mentally challenging. I was fine though as I did a 12 hour race last summer with 5 mile loops and ran 11 loops and i'd probably do that again too ;) 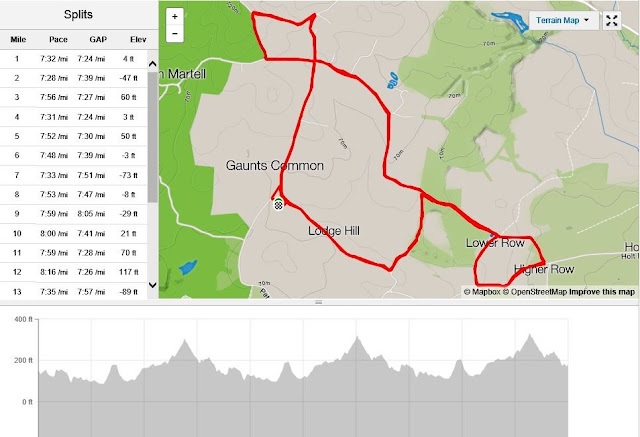