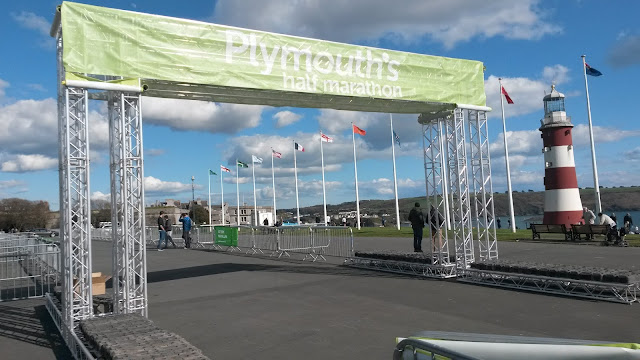 I had been wanting to do the Plymouth half marathon for a couple of years now but somehow seem to miss it. I always found out about it when it was too late but last year I got in there early and booked it up. I've always loved Plymouth and spent quite a bit of time there skateboarding with friends over the years. I would set this half marathon as my one to race for the year. I was long overdue a half marathon PB which currently stood at 1 hour 29 mins and 26 secs.
Sadly, I was nowhere near racing weight or fit enough. I told myself I would still race hard though and try and run 7's. 7 minute miles for 13.1 miles would roughly get me a time of 1 hour and 32 minutes. 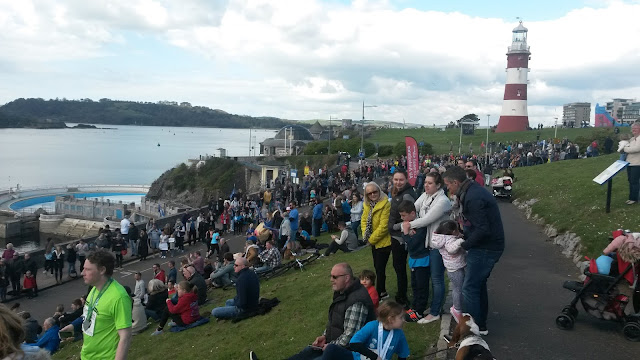 Leading up to the race, other runners started to ask me questions about the race. "Is it flat/hilly?". "Where did it start/finish?". "Was it a fast course?". I knew nothing about the course apart from that it started from the Hoe.
I found a course map and studied the course. I had done quite a bit of the route when I got lost trying to find Plym Valley parkrun. The course would start at the Hoe and head towards the Barbican along the sea front and then I was a bit confused as the Barbican was all cobbles. Surely we weren't running on cobblestone? I had trouble walking on them when I was hungover!
The course continued past the beloved Gin distillery and then right towards a bridge and then a nice climb up Billacombe and then a right into the top of Saltram. A beautiful area owned by the National Trust.
You were then heading back right? Well, you had to run up and down this A road. An out and back section of closed road with cones and tape either side. That was mile 10, It was a long way out and it was kind of depressing knowing that you had to run back again, but at least you wouldn't have the headwind on the way back. I was really struggling here. Anyways, i'm jumping all over the place... 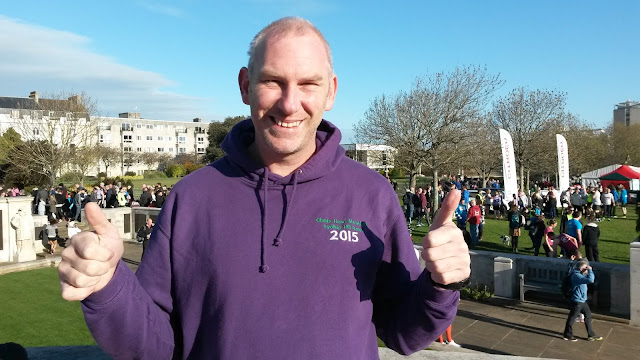 The day before the race, I got on the train after Fareham parkrun and stayed at my mate Nick's on the Barbican. We went on a 5 hour drinking session where I was a very good boy and drank diet cokes until I could take no more and gave in to a full fat coke. It was this girl's 29th birthday who worked for the BBC. She was a very nice lady and I chatted to lots of others with people asking me about the race and word soon spreads around. "This guy is running the marathon tomorrow!". In the end, I gave up explaining that it was merely a half marathon..lol. I also made a new lady friend who liked to blow cigarette smoke in my face, hug me and tell me how much she loved athletes. It was funny.
A battered sausage and chips later, we were back at Nick and Hannah's place. I went to bed and only had a 5 minute walk to the start the next day.
I had a banana for breakfast and that was it. On the way there, I caught this woman taking selfies. We walked together and chatted. Her name was Lisa, it was only her 2nd half marathon. Her first being in Stafford with a time of 1.45. She was originally from Plymouth. We took photos for each other (See above photo). She said she would try and catch me up during the race even though I told her I was going for 1.32. She was quite competitive but very nice all the same. I found the baggage tent and then queued for the portaloos. This was a big event, so the queues were big. Would I make the start in time? Did I really need the toilet or was it just pre-race nerves? 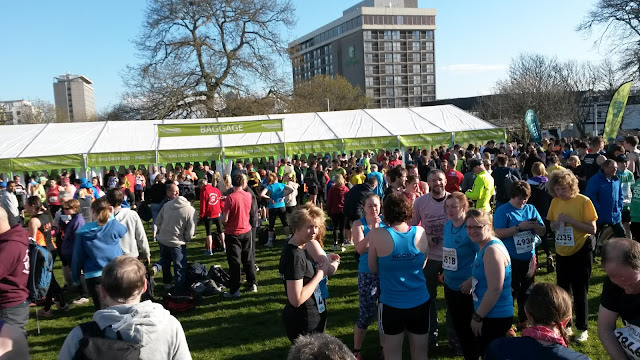 I got to the start with 5 minutes to spare but the 1.30-1.45 area was rammed. I could not even get into the starting area. I had to wait in a gap by the barriers and wait for the crowd to filter through. Even then, some of the 1.45+ runners were passing me. Did they not think to let us in? Obviously not! Anyways, I crossed the chip map and it was still busy. It was downhill too. I tried to weave the best I could but before I knew it, the course was climbing again towards the Barbican. Oh look, cobbles to run on. It actually wasn't bad and they didn't last for long. People lined the streets shouting words of encouragement. The support here was fantastic. We were close to my mate Nick's. I wonder if he bothered to get up on his hangover this morning. And then, I saw him. I was already sweating a lot by then. I thought it would be funny to wipe as much sweat from my forehead into the palm of my hand and try and "High 5" him as I passed. I was to be disappointed as he stood there taking photos of me and grinning instead. That made me laugh for a few miles. Until we hit this really big hill in fact! My pace was off by now and I wasn't feeling comfortable or fast at all. I carried on battling away though. This hill really did climb a lot! But then, soon after I looked at my watch and I was running a sub 6 pace downhill towards Saltram. We entered Saltram from the top too which meant there was more downhill. I was really liking this bit. The marshals were great too. 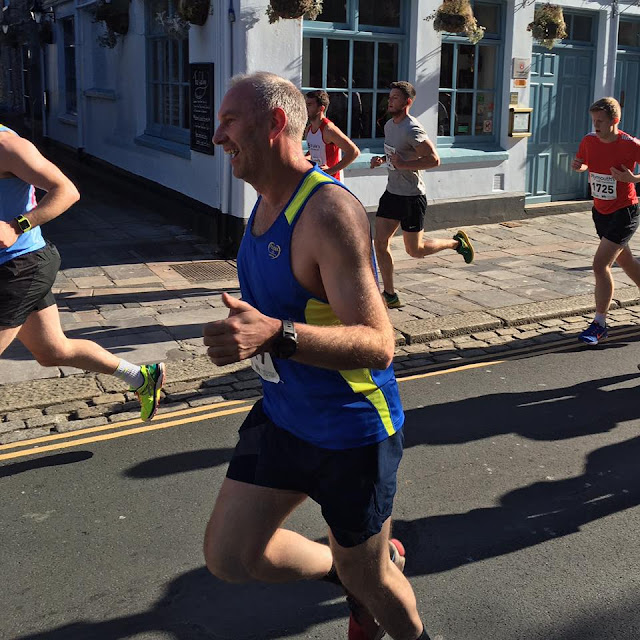 And then it got really hard. An out and back A road at mile 10. It lasted a long time but I got talking to someone on the way back when I could hear again as there was now no headwind. That really helped put my mind in a more positive place. I was just pushing on now and wanted to get to the finish. This was hard and I was suffering. My 1 hour 32 nowhere near possible. It didn't matter though, all that mattered to me is that I was trying and racing hard (Despite the mini conversation).
It was pretty warm too, so I would be pouring water over my head at the aid stations. Back onto the Barbican and then support was electric. There was also a band playing that I forgot to mention earlier. I clapped them as I ran past. And next... A 1K climb to the finish line!!! Are you kidding me..lol. The crowd were amazing though and very encouraging as I dug deep into my soul to get up that hill. 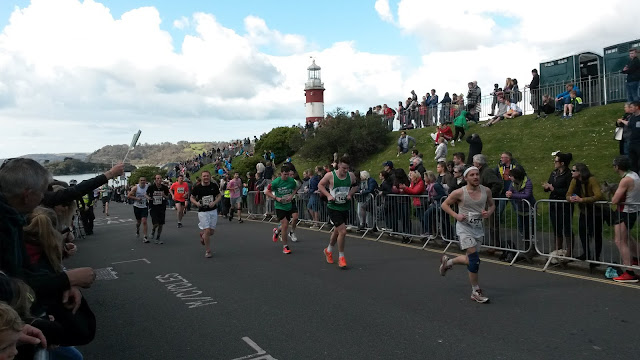 I crossed the line in 1 hour 35 and something. I was 3 minutes off my desired time but it was a great test for me as I hadn't run a half marathon for nearly 2 years. I really didn't know how fit or unfit I was when I approached that start line. I cheered others in and I looked out for Lisa, hoping see was going to beat her 1.45 on a tough course. I didn't see her but I did manage to see my friend Liz who runs for Tavistock but by the time I got back to the finish line, I couldn't find her in the swarms of runners and supporters. It was a great race though and I was smiling all the way to the pub with my medal. A nice goody bag too. I think I would do this one again and try to smash my current time here on a challenging course. A wonderful weekend all round. 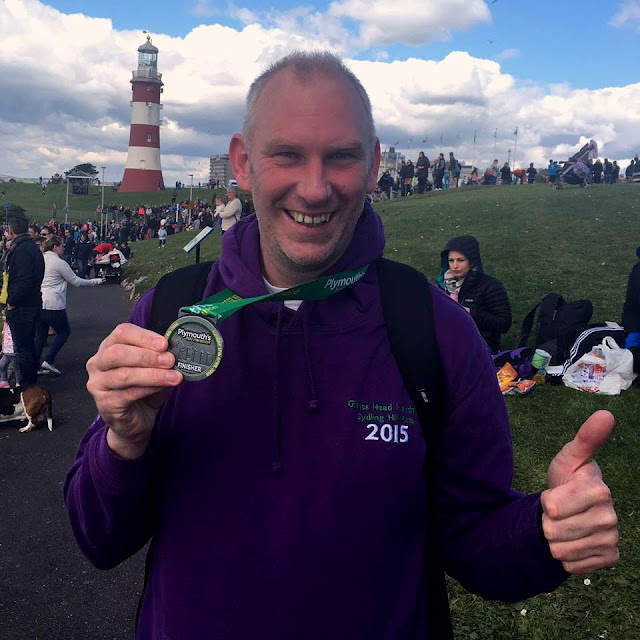