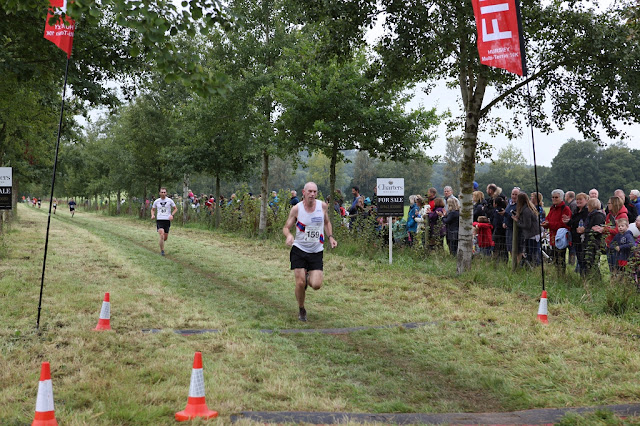 (Heading for the finish line)
I hadn't run the Hursley 10k in 5 years. It was in 2011 that I started running and this was my 5th 10k race that year. I was 26th in a time of 43.16. I remember beating Stuart Smith which was a big achievement for me (although he did have a knee injury) I also beat Neil Catchlove by 5 minutes but I didn't know him then and he probably did it on crutches or something...

Anyways, I was back to recapture some of my early running days. I went to school to collect my race number the day before. I thought I knew where the school was and it was empty. It was empty because I wasn't outside the school, I was outside the Parish hall which I thought was the school. I google mapsed the school, turned my bike 180 degrees and began pedalling again. It didn't take too long though.
I collected my number and got a t-shirt. The two women I spoke to at t-shirt collection were very friendly and we chatted for a while until a much older lady came by and told them off for being "tarts" and flirting with me. I can't say I noticed to be honest..lol. Off home I went and waited for the next day to arrive so that I could cycle another 9 miles each way without getting lost and getting to the race with plenty of time. 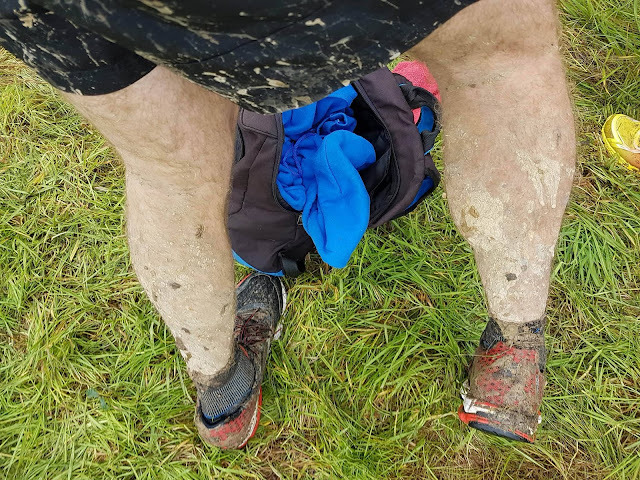 (It sure was muddy!)

The next day (race day), I locked my bike at the school and not too long was it before I bumped into Rob and Kim Kelly. I then saw Clare Satterly and Peter Casey. I wandered about in a field for a bit (race village?) and got myself a free banana and queued for the portaloos. I got chatting to Rob Kelly again and then I felt this yank on my running shorts! Luckily though, I had tied them tight. Nothing worse than being naked in a field full of families. That would be my mate Paul Carpenter then. I also saw Paul Hammond taking pics of the Eastleigh crew. 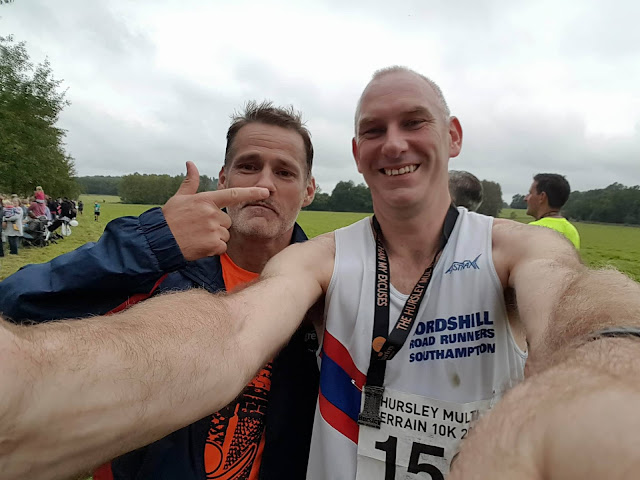 It was cold and it was wet and my warm up run of half a mile got me covered in mud and gave me wet feet. I made my way to the start line and hid behind Rob Kelly who I was hoping to stay with for some of the race. I also saw speedy V50 Alan Graham from my running club. There were some other Lordshillers too but I didn't know them as I only go to training twice a year..lol.

As the course was too water-logged for a lead bike, we had a lead tractor or something. The thing nearly didn't start after the run command was given as well. But off we went running through a water-logged field with wet, cold feet splashing in the grass. You were never quite sure where to put your foot with each foot fall either. It was a bit uneven and you had a choice of long folded grass or 4x4 ditch with long folded grass. Bit of a lucky dip really but my ankles did good. 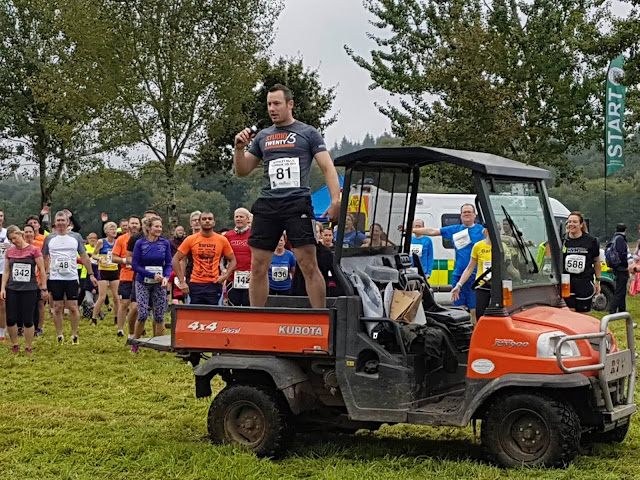 Out of the field we came and onto a road leading uphill. We ran uphill, reached the top and then down into another field. This was a bit different from the original course I ran in the dry and glorious sunshine in 2011. They had to make a diversion or two though so i'm guessing that this was one of them.
Into the woods we went and now it got really muddy! I was sliding all over the place in my road shoes and finding it really hard on my muscles. Every foot fall again had to calculated. Tree roots, bogs etc.. It was going okay though... until...

I got to mile 3 and the mud continued. I had slowed and was finding it tough. I had been racing a lot lately. A 20 min parkrun the day before and a 23 miler on the Wednesday. Weak excuses I know!
Anyways, the course took us downhill now but I was still slipping all over the place and couldn't judge my foot falls too well as my eyes were flooded with water from the wind or possibly sweat. I had to slow down as it felt too dangerous to be running fast downhill with little balance. I think about 8-10 people passed me on that bit. When have you ever seen anyone pass me on a downhill? 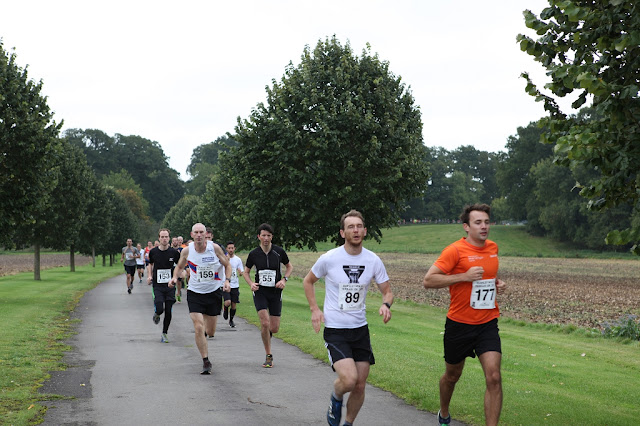 (Probably the only bit of road on the course)

As we got to mile 4 I thought it was about time that I started to do some racing. Rob was nowhere to be seen now but I would try to close the gap and after half a mile I finally caught up and passed the first female runner from Winchester. She was breathing hard, I kind of congratulated her as I overtook but not sure if she understood my grunt. I was passing a few more now but the course had a fair bit of uphill now. I was glad to get to mile 5 after a long climb and finally see some more downhill that was runnable. I picked up the pace and passed a few more people including a guy from Winchester. I think that woke him up a bit as later he would dash past me and I didn't quite have the energy to push him into a sprint finish at the end. He was looking way too strong for me.

I didn't beat my previous time due to the conditions, neither did I beat my race position from 2011 but I had tried and raced as hard as my body would allow. I was so glad to cross that finish line!

27th place in a time of 44.20. My coach beat me by just over a minute I think.
It was a tough race but I will be back next year to beat my course time.