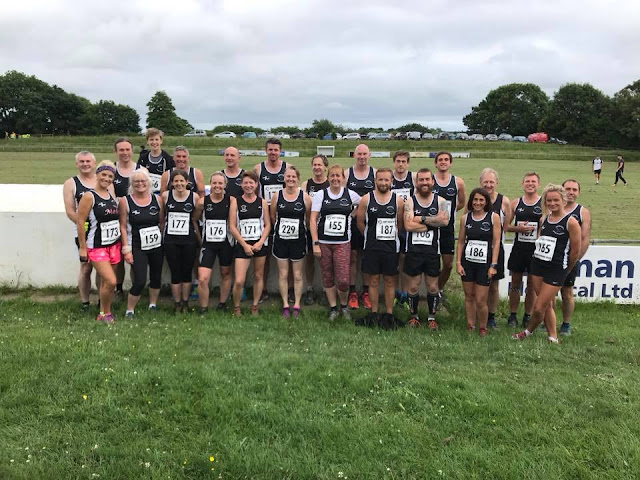 We're 6 months into the year and I was pretty nervous about my first race of the year.  I was going to be running a tough multi-terrain course for 6.5 miles. My knee seems to be improving and there is much less pain during recovery. I can even walk most days! Should I be racing with such a list of injuries? See photo below for my MRI results. Next stop orthopaedic surgeon.. The main fear was that I was going to be running for a new club where I hadn't really met anyone or knew anyone. This isn't strictly true though as I met Jane when I collected my awesome vest the other day and have had email contact with a few others. 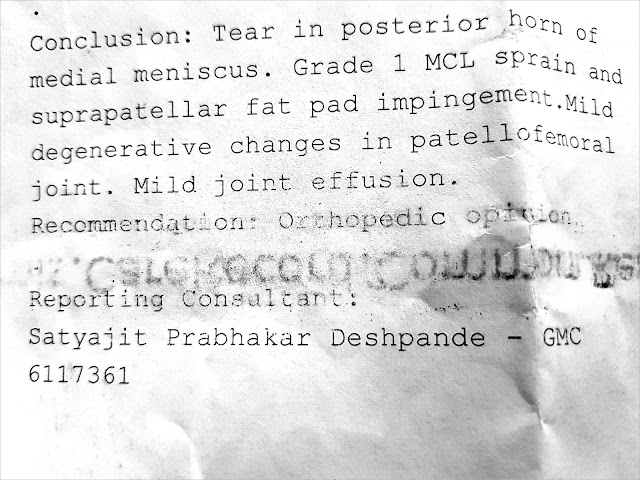 I love the fact that this race is on a Wednesday evening and I was able to get a bus into Truro from where I live near Mount Ambrose. I arrived in Truro with plenty of time to spare and then another mile walk to the Rugby club and a big hill called St. Clement hill. I got there and picked up my race number. I stood around for a bit until Jane recognised me and called me over to a small group of other Penguins. NRR's nickname due to the Black and White kit I guess! Everyone was very welcoming and it didn't take long until I was chatting away while more and more club members arrived. It was getting pretty busy despite there being less than 250 runners in the results. 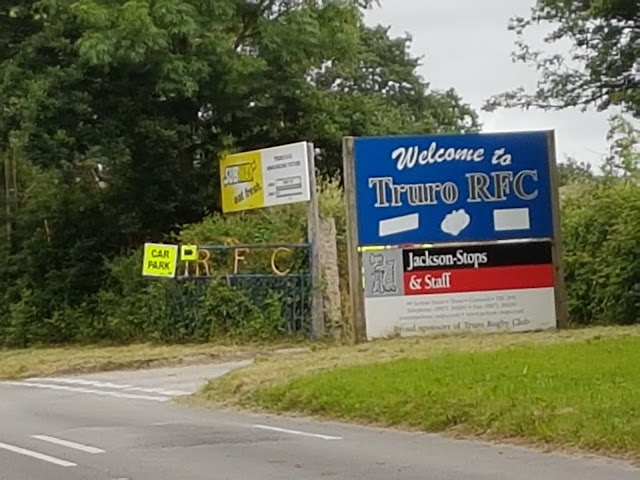 I did my mile warm up and then we walked to the start line. On the start line it began to rain while the run director spoke about the perilous course. Was this a good idea? I'm more of a road runner than a trail runner I think. My ankles aren't too strong either!
No chip time in this race, just good old fashioned gun timing, so I made my way near to the front. And off we went running through a field and towards a narrow looking gate. It soon opened up though when we hit a road and started to run downhill. This is where I got carried away and started to pass lots of people with my long legs. I was running at 6 minute mile pace and I had only been racing parkruns since April. I tried to reason with it and say to myself that it's good to blast the road section and it was downhill afterall. Mile one in 6.12. 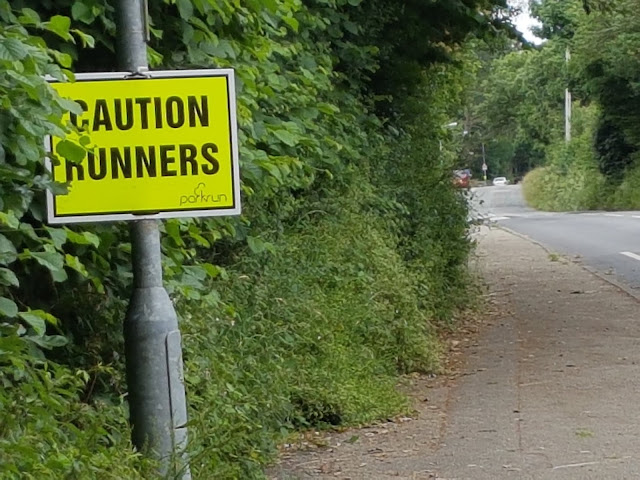 We soon hit the trails and the course became quite technical. There were many tree stumps and roots to manoeuvre around. It was nice and undulating through the woods and under the trees. We could have been anywhere. I was so disorientated by direction due to all the weaving in and out of trees and concentrating on my footfalls. We rounded Pencalenick school and were soon beside the Tresillian river. Even though we were racing I had time to admire the beauty of the course with the River on the left and a lake or pond on the right? I thought that I should come back here sometime for a walk with my camera. It think it was actually St.Clement. 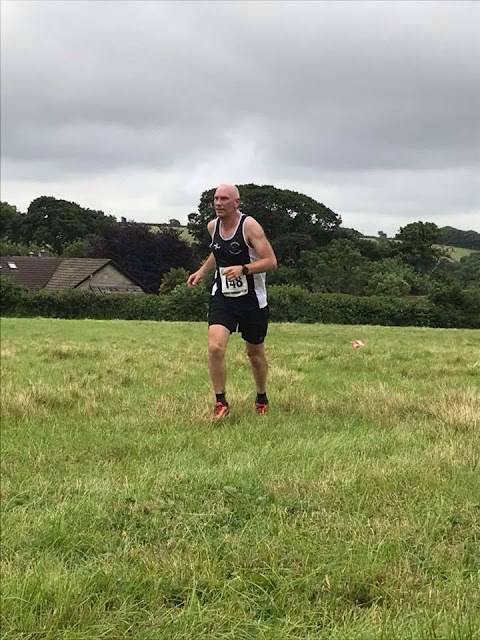 I had hit the 5k mark and sure enough, I was starting to feel it. I passed three of my club runners earlier on, on that downhill section and they were to overtake me now with lovely words of encouragement as they passed me. I had definitely gone out to fast as my splits show. It was quite narrow on a lot of the course and hard to pass others. I would offer to let people pass me.
I saw the girl in front of me trip on a tree root, she went flying but cleverly managed to stay on her feet and continue running. I had also kicked a tree root and my big toe was throbbing. I was wondering how many runners got injured on this race with the dangers of nature. We descended some steps that were quite spread out as well. 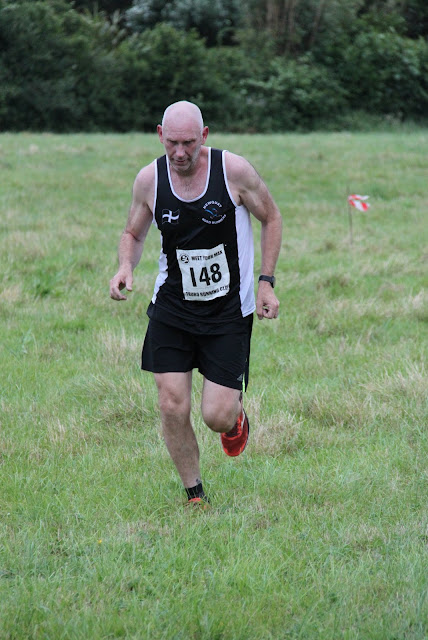 We came out of the woods and I was glad to see the water station halfway round as it was quite humid now and the rain had stopped just after we got running. Verity shouted encouragement as I ran past. I have got to know quite a few Truro Road runners due to doing Trelissick parkrun quite a bit. Lots more lovely people.
Now, my story is a bit all over the place as I can't quite remember where stuff was on the route or even where I was. We had a tough drop which was a bit muddy so I just slipped down the bank and into the water. We then had to run through a muddy but shallow river, climbing over one tree trunk and ducking under the next. My feet were nice and wet but I knew this about the course and brought spare trainers with me. 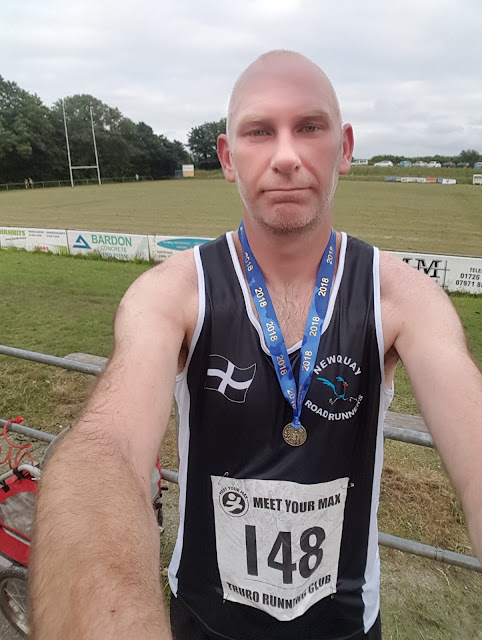 I actually knew where I was at one point when we came onto a road and into Malpas. At this point I was greeted by the Devil... or a lady dressed as the devil at least. Little did I know that this was a sign that the true suffering was about to begin. We turned right and then there were these steps. I started walking up them and most others did too. I think maybe 2 people passed me. This steps were hard work and I could feel the lactic acid forming in my calves. Even when the steps were done the course still seemed to climb. I was really struggling now but didn't want to lose the guy in front of me in case I got lost. Not that I should have because the course was so well signed and the marshals on course were great. 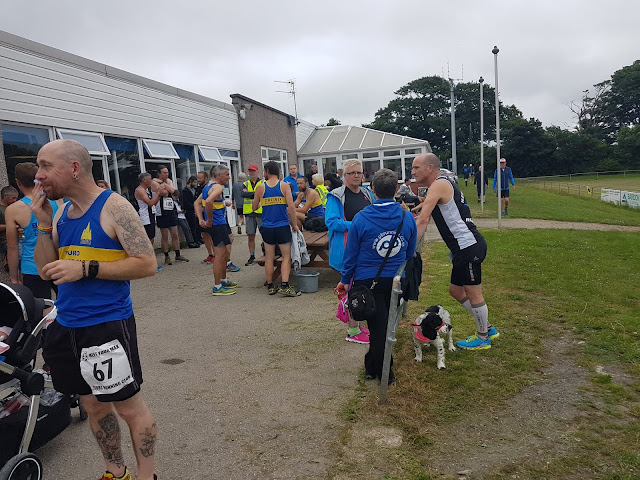 I came into a field and was able to pick up some pace again. A marshal said something as I ran past but didn't quite hear it. Sounded like "Watch out... Wheel...?" I kept on running through the long grass looking for a wheel and trying to decipher the marshals message. Then it came to me. Watch out, it's real uneven. The grass was long and it was hard to see what was underneath. It wasn't too bad though but the field afterwards was quite rutted with 4x4 wheel implants.
After my third mile all my miles that followed were around the 9.30 minute mile pace. I was almost dead and running on empty... apart from the fact that I needed the toilet really badly. This made me press on quite hard. Not sure that I would even make it! On the last mile I looked around for somewhere to stop despite having no toilet roll. My stomach was cramping and it was getting quite intense in there! 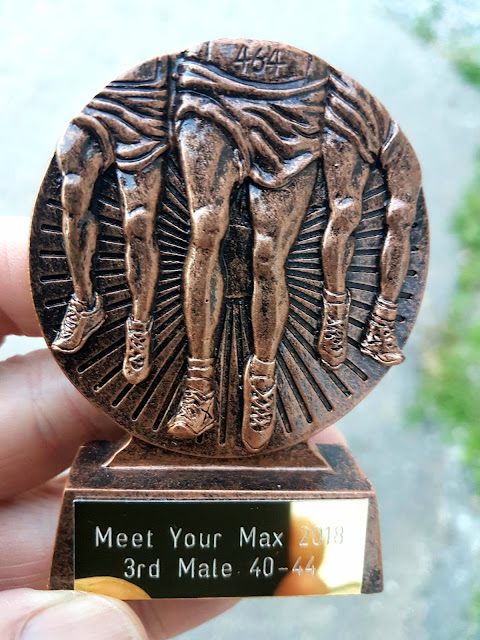 Not long and I could hear people cheering. I turned left into a field and could see the finish. The race was described as "a long 10k nearer to 7 miles" by the race director at the start. I was expecting 6.7 miles but ended up just over 6.5. This made me happy. Someone shouted my name and some of the lovely penguins cheered me in as I did my best to race to the finish. See the pics of how bad I look! Not sure who took them but thank you.
I finished in a time of 55.15 and was 52nd overall. I was also shocked to pick up the above plaque for 3rd V40 male. Not bad for my first race back and my first race for NRR with all my injuries. To say I was over the moon was an understatement. Oh yeah and there was a total of 747ft of elevation. Probably the toughest 10k I've done but a great experience. 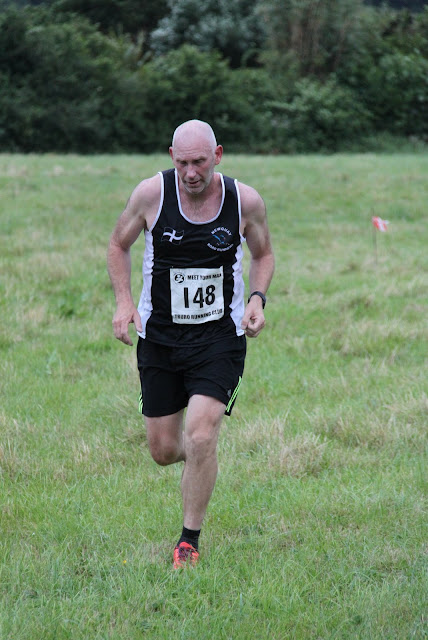 Looking so destroyed in the above photo but the good news is that I made it to the toilet in time and got a nice medal and a cup. "What no pasties?" Everyone was saying..lol. I had a couple of Doombars while I waited for my plaque in true athletic style.
Posted by d3@N j0n3s at 10:28