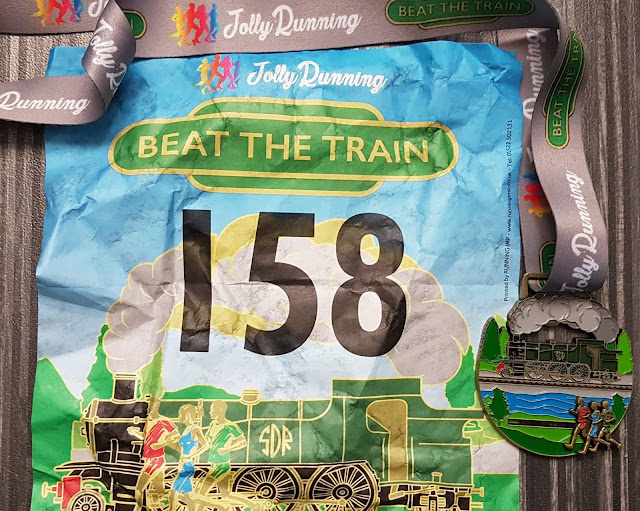 We didn’t do too badly the night before. Just the 6 pints each for Adam and myself, Carl did the same but added a bottle of wine in there. We were up nice and early and on the road to Totnes for a race called “Beat the Train”. We didn’t bother with breakfast, plenty of carbs the night before with the alcohol, plus the race was only 6.8 miles. It was to start at 9.15 and despite getting stuck behind a Hare on the road for a while, we made it with lots of time to spare. This excess time was filled with coffee drinking and toilet stops and messing about trying to decide how cold it was and what to wear. I saw Shelley, the Landlady from my local pub the Minerva in Plymouth. She joked about my coffee cup being full of HSD ale. After we did a bit more moaning it was time to put the bags into the bag drop and look at how badly we had pinned our race numbers on. 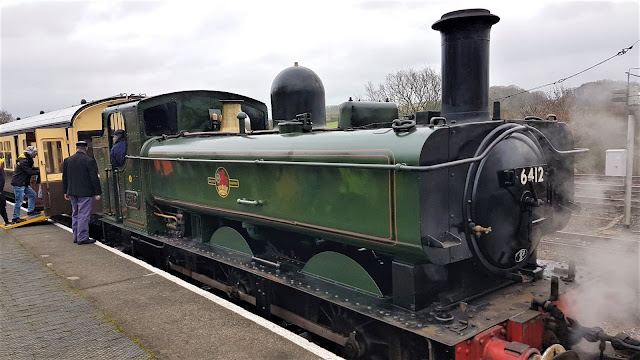 (The train we raced)

The race briefing was told but I could barely hear it with people talking over the top. We then walked and waited for the train’s whistle to blow to mark the start of the race. We weren’t feeling too confident about the max capacity of the extension bridge on which we were stood. It was very flexible, but didn’t feel all that strong. We decided to shuffle forward a bit to get away from the middle section. 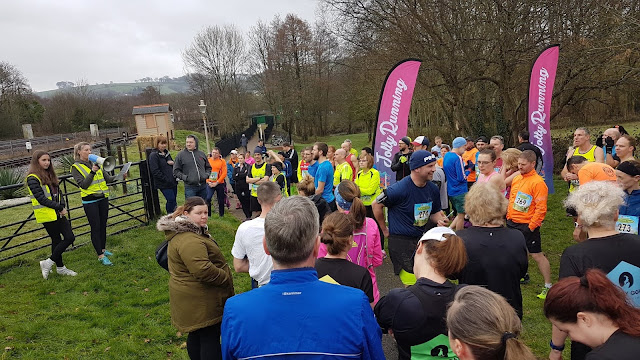 (Race briefing: Shut up you dicks!)

The train’s whislte blew and we shuffled forward until we zig-zagged down a narrow walkway and onto a road. Shortly afterwards we hit some woods on a National cycle route. A nice trail run ensued. Muddy in places but not too bad. They did recommend trail shoes but mine were being of no use being back in Southampton. It got a lot muddier as we went on. From time to time you could hear the trains whistle blowing. Although you couldn’t see the train it gave you an indication wherever you were ahead or behind schedule.
As I ran into an open field, I could see the train stationary to my right on the other side of the river Dart. We were basically following the river from Totnes station to Staverton station and back. It was an out and back so we guessed that it would be roughly 3.4 miles each way. We also came to the conclusion that it would be flat as we were following a river, it wasn’t. 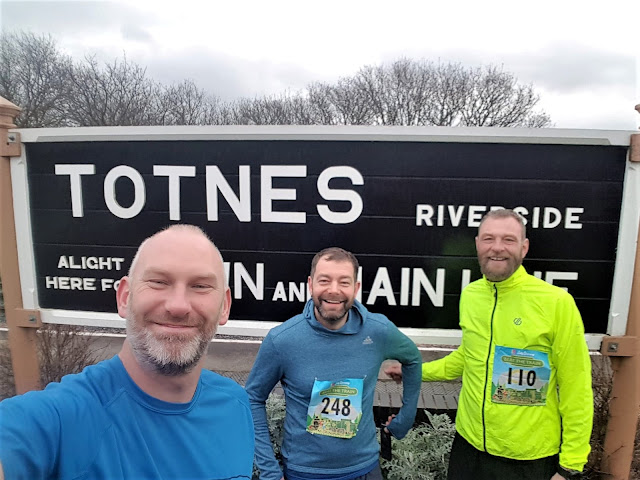 (So much love and happiness before the race)

In places the trails got a bit more technical with steps and tree roots but it was a lovely rural course with only a bit of road at the start and at the turn around point. After only 2 miles I was breathing heavily despite having a pretty slow pace. Even though I was nowhere near race fit, I was a bit worried about Carl beating me today. He is pretty new to running and this was his first real race. Wouldn’t that be embarrassing if he beat me! Anyway, I had no concern about Adam as his last run was over the xmas period. That’s right, he turns up at a race and hadn’t run for nearly 2 months! I thought he was really going to struggle as I was finding it tough just after a 2 miles. It had now started to rain as well but it was a very welcomed sensation as I was sweating out all the Ale and overheating. 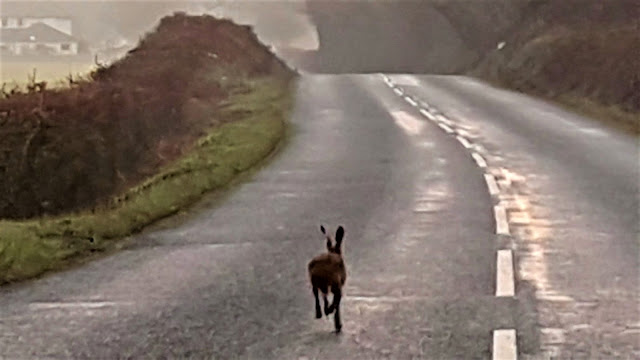 (A Hare doing 30mph for about a quarter of a mile)

When the climb started, Carl caught me up. A bit too steep to run up so we walked and chatted for a bit but soon after he was gone until I got to the fast downhill road section where I passed him but didn’t take long to catch me up again and we were chatting again. We were at Staverton station now and we had just passed the water station. No sign of the train at the station. I wasn’t quite sure if we were still beating it or not. Anyway, something else soon took our minds off of this.. The first runner said something to us as he went by on the return journey. We couldn’t make out what he was saying but then more runners came and told us to turn around as there was no official turn around point.
I looked at my watch and it said 3.6 miles. We turned around and headed back. Some runners near me were cursing about the extra mileage and told the volunteers at the water station. It didn’t really bother me. I wasn’t race fit and I wasn’t going for a time on a trail race which isn’t even UKA licensed. It was just a challenge for me and to get some fitness back. I was still struggling though. 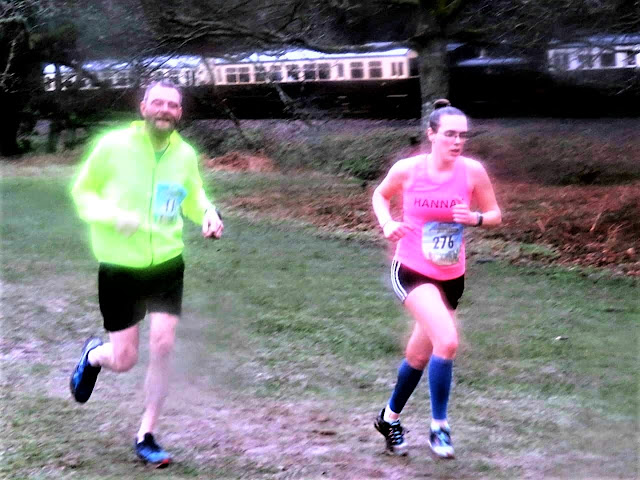 We saw Adam running down the hill the other way. He was behind us but I was surprised how well he was doing. Not long after, Carl left me for dead. I could see him race off into the distance. I could also hear the train just in front of me. Rather than focus on beating Carl now, I wanted to beat the train. I was struggling though. My hamstrings were really sore and didn’t like the short strides on the muddy fields. I was slidding around quite a bit and focused on staying upright.
I was happy to get back to the road and blast out some faster running. The 8 or so people who passed me on the muddy fields were now being overtaken by me as I upped my pace. I knew the train was near but then I got near the extension bridge and I knew both the train and Carl had beaten me. I still pushed on though with a strong finish. Carl was stood at the finish line taking a photo of me running in. Something I usually did to him at parkrun. Adam wasn’t too far behind either. All finished and survived with our lovely medals. Time for Bacon and sauasage baps as we watched the other runners come in and stare at the hot ladies. There were lots of hot ladies! Anyways, it was a wonderful day despite being beaten by the train and Carl. Good running conditions really. 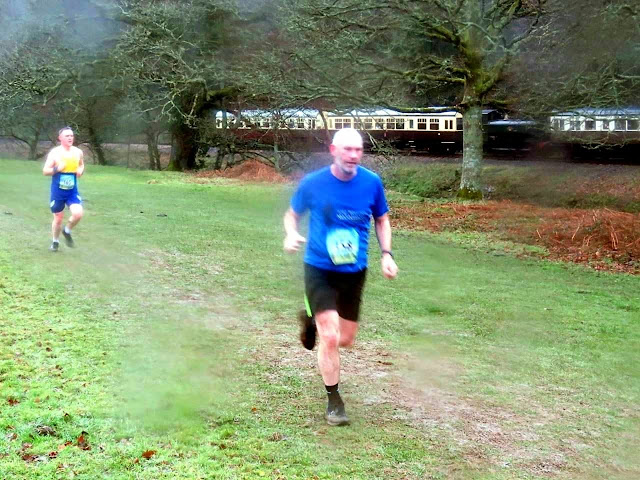 (Level with the train in the rain)

Apparently we were told that as soon as you arrived at the water station in Staverton, you turn around and head back. It was told in the race briefing and it was also stated in the email, but who reads emails? I thought there should have been a marshal from the water station directing runners around a cone like they do at some of the parkruns, that would have least made it more obvious to us! Hopefully they will rectify this for next year when I beat Carl and the train in my trail shoes. 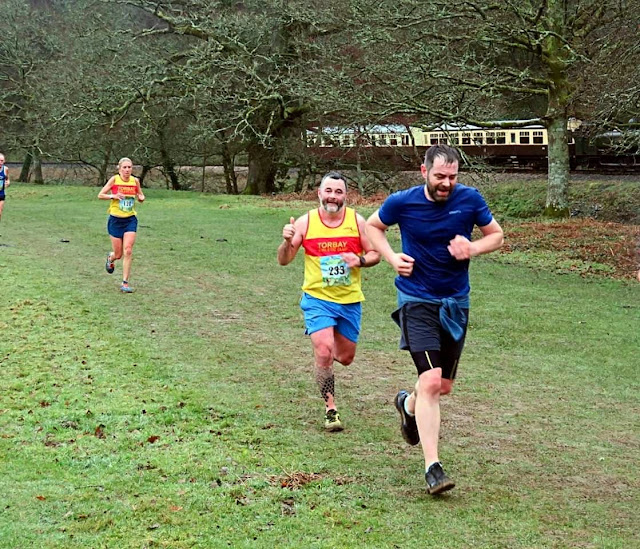 (Adam not getting "Chicked") 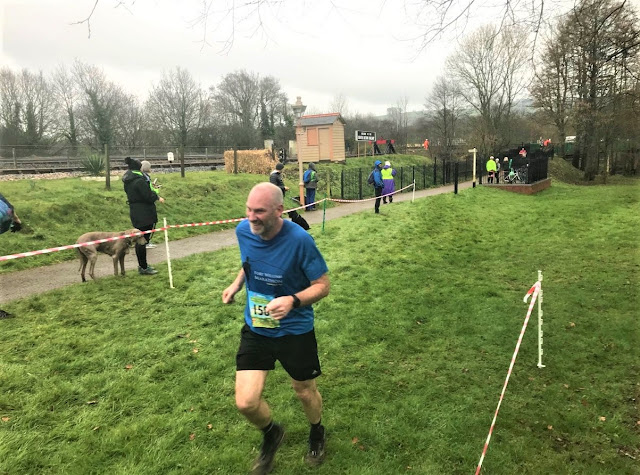 (Carl getting a rare shot of an elite runner) 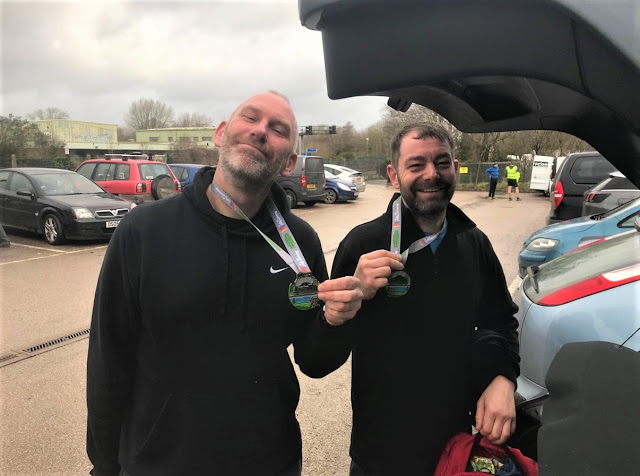