…And now for something completely different: The Ciderthon 2019 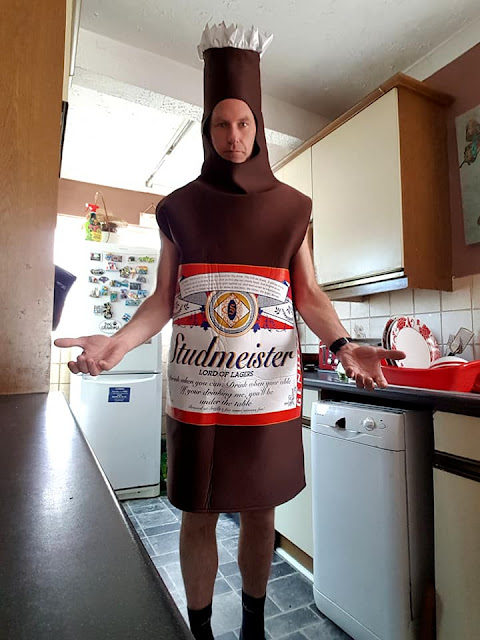 It’s pre-race day and I’ve volunteered at parkrun and rushed into town to buy a costume for an event called the Ciderthon. It’s a half marathon where you get to sample a different cider at every mile and finish with a nice pint of cider. Fancy dress seems to be a high priority for this event. I wasn’t going to bother. Mike Mat has his Viking costume already though and like proper men, Carl and myself have left our shopping to the last minute. Let’s face it, you’re not a real man unless you do all your xmas shopping after midday on Xmas eve. 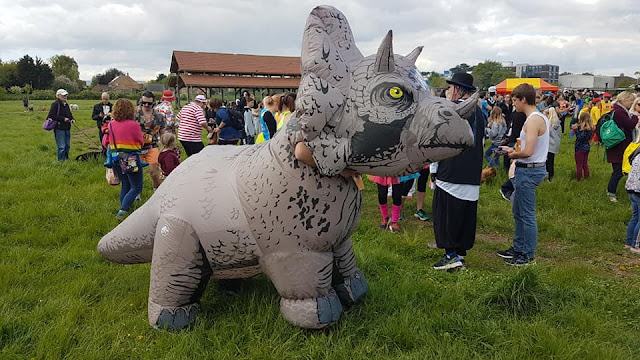 I really wanted a Ninja turtle skin suit. It made sense, I like ninja turtles and it would be quite lightweight. I discovered that the turtle mask zipped up from the back and wasn’t going to be accessible for the cider. Also, I couldn’t bloody see through the thing. A 118 costume was suggested as was a baywatch one from the shop assistant. After a bit more time I decided on either an inflatible cow or a bottle of beer. I chose the latter. I tried it on and it seemed okay.
I got home, tried it on again and wondered what the hell I had been thinking?
13.1 miles with 14 ciders dressed as a very warm bottle of beer! In my Eight years of running, I have never DNF’ed a race. Tomorrow may be a first for me. It’s exciting though and something different. A new challenge if you like. Will I get round, will I pass out due to heat exhaustion or will I just fall over drunk halfway round?
Anyway, Carl has a lovely looking Pirate costume going back to his Cornish roots. It should be an interesting day with something to tell hopefully. I get picked up at 6.30am and the race starts in Taunton, Somerset at 11am. Watch this space…. 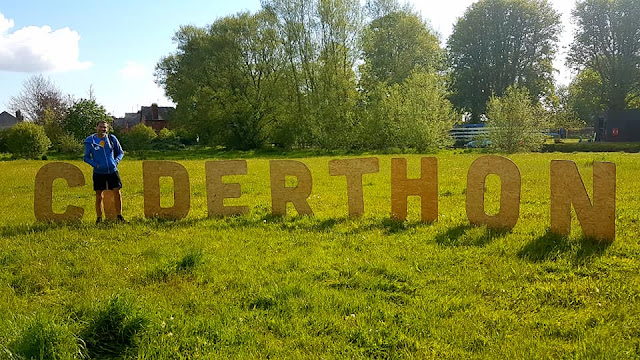 The following day, something strange happens. Mike Mat is early to pick me up! We leave and head for the A36 and off to Taunton we go. We get there with plenty of time to spare. We walk to Longrun meadows which I know well from the parkrun and collect our race numbers. Off we go to the wetherspoons. Mike orders breakfast while I’m thinking it’s too close to the start of the race for me so I just have a pint of Thatcher’s gold to warm me up. I’ve only eaten a Pain au Raisin at a Costa on the way here. This worries me a bit. Mike is in costume eating his breakfast in full Viking outfit. Nothing out of the ordinary for a Wetherspoons I suppose.
Carl phones and we decide to meet back at registration where he is already enjoying a pint. Time to put on my beer bottle and get ready to run. The weather seems ideal. A bit overcast with a gentle breeze. 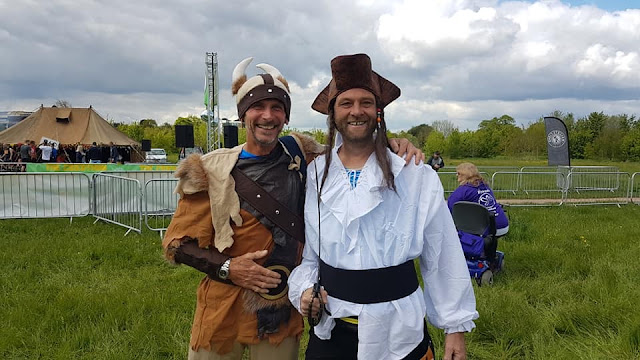 Mike Mat rushes to the portaloo about 5 mins before the start of the race. Carl and I admire all the other costumes. A few inflatible dinosaurs. Lots of baywatch/lifeguards. Mario and Luigi. A pair of devils. Someone inside a shark. Some scarecrows and so on.. Carl tells me that although it’s a half marathon, it isn’t a timed event. No rush then as we stand near the back and wait for Mike’s return.
The race starts and there’s no sign of Mike. We plod forward and then come to a walk with the congestion. Lots of funny remarks are made from various people and we enquire randonly about our lost viking. We keep looking back and still no sign of him. We decide to just get on with it. 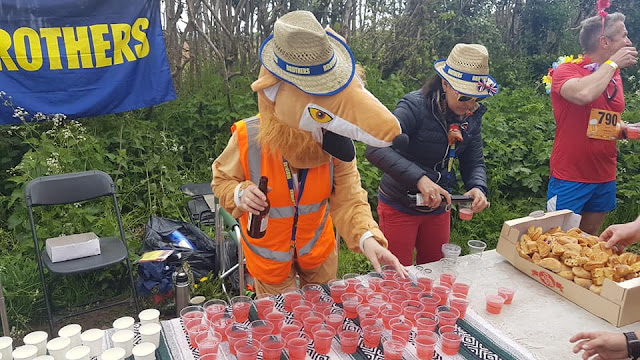 A lovely start at Longrun meadows and we run along a narrow trail for some time. It isn’t long until we reach our first cider station. Carl has already knocked three back and is ready to go. I take two and we continue. After this we get to a main road. It now feels very surreal as we pick up the pace on a nice downhill road section in fancy dress, running next to a main road dressed as a beer bottle.
We pass Mario, Luigi and some Minions and chat to some others. I’m feeling a bit tipsy already. The next cider station isn’t a mile away though. I guess I was expecting cider at each mile but like Carl says, it’s probably difficult to set up a station on the main road. We chat to a man running it with his lovely dog. He nearly takes a cyclist out with the lead though as it streches all the way across the road. The longest lead I’ve ever seen. It makes us chuckle despite the risk of an accident. 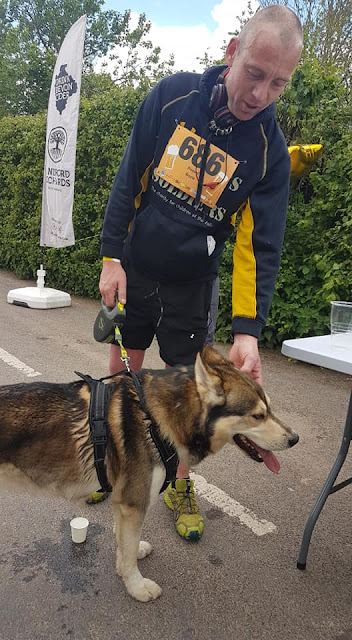 2.5 miles or so and we are rewarded with more cider. Three more ciders for me and Carl as we chat to others at the station. Back on to some lovely country lanes. It isn’t too hot in my bottle costume. Although my head is getting a bit sweaty. Carl shares a few pirate “Aaaaaarrrggggghhhh’s” with fellow runners as we pass more runners on the downhills. There are a few uphills too but we are running pretty slow so not really a challenge for us. Some people were struggling on them though.
We caught up with the devils at another cider station. The stations seemed to be more frequent now and we were drinking three at most stations. 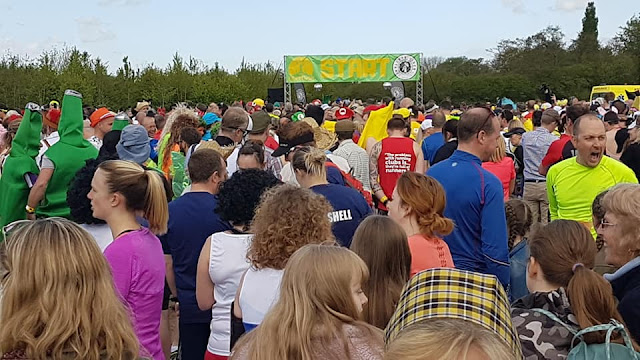 There were plenty of portaloos on route, which was good as I was dying for a wee at 5 miles. It’s gets a bit blurry from here on. I remember reaching 10k and thinking how drunk I was. I told Carl that I was going to run fast(ish) for a bit to try and sober myself up. Luckily on one of the stations there was some food. Think it was brioche or something. Some kind of pastry. I couldn’t run fast for long but it was a nice change of pace. I swear there were about three cider stations within about a mile of each other. At one point I actually diluted my cider with water. 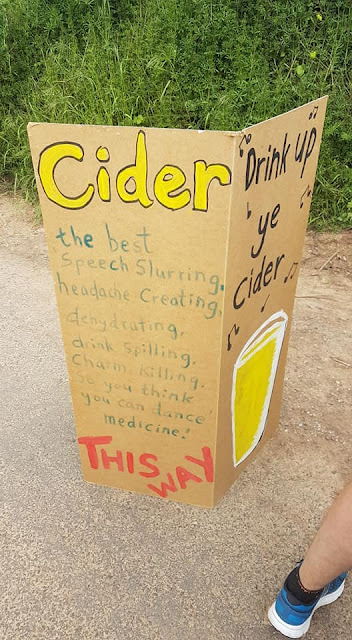 Eight miles and I was definitely drunk, talking to everyone who came along. Everyone was so friendly and chatty, smiling and appearing to have a lovely time. Luckily Carl spotted an arrow turning left into a road as I was about to follow some farmers straight on. We shouted to the drunken farmers to turn around and they thanked us. Back on course but very drunk.
Onwards we went, running, chatting and drinking cider. What a day! And now the sun was out. No sign of Mike Mat still. Maybe he didn’t start? We got chatting to some Welsh Mexicans. Welsh people in Mexican costumes that is. They were pretty drunk too. Carl and myself would blast past runners but they would catch us back up at the cider stations as we spent so long there drinking and chatting. Then we would leave and catch them up again. 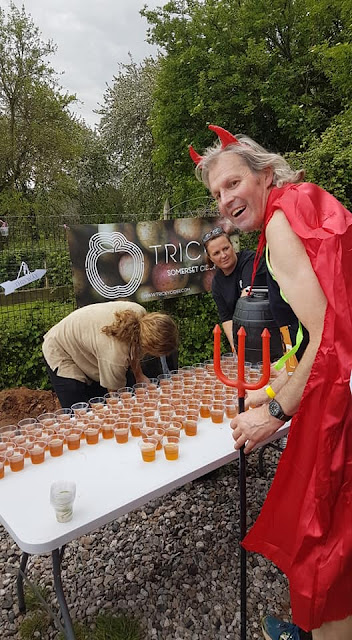 It was funny to see the dinosaurs again. They were now deflated in more ways than one. Costumes were around the waists and they looked defeated. Not easy costumes to get around a half marathon in. Respect to those guys. About 10 miles in with a parkrun or so to go, I fell in love with this Welsh girl that I wanted to marry from Cross Hands. She took a picture of us and she told us to drink and move at the same time. We chatted some more about Welsh parkruns and Carmarthenshire. It was awesome but I think we had to leave her to run faster. I can’t remember why I didn’t propose? Probably Carl’s fault? Anyway, off we staggered. 13 miles with 13 stations. Carl was having 3 ciders at everyone while I was having 2 or 3. That’s 39 ciders for Carl excluding the pre race pint and we got a can of cider at the finish. I must point out that these were probably slightly more than quarts of cider I guess and not full pints! So it was probably more like 11 pints. 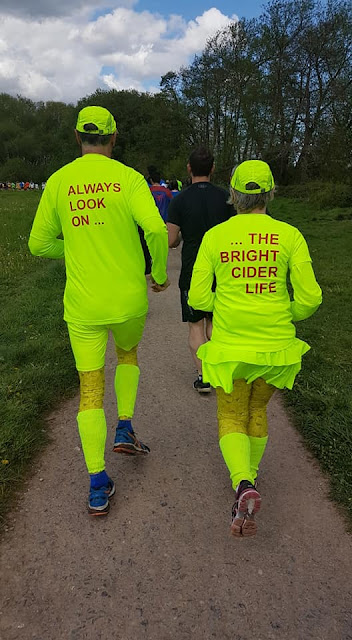 Waiting for us at the finish was a fresh faced Mikey. Already out of viking costume. He said he had got to the start just in time and got near the front. No wonder why we never saw him. I think he raced it..lol. The cider didn’t stop there. At the finish we got a medal and a t-shirt with our can of cider. Off to the cider tent we went. The sun was out, music was blasting from the speakers and we were drunkenly dancing on the grass. The ciderthon was now a cider festival! This went on for a few hours I think as the slower runners were still coming in. We knew it was time to find our B&B when I tripped over a little kid and made him cry. It was such a good day but the hangover was easily a two dayer. A wonderful experience but I don’t think I need to do it again but after writing this I’m thinking… well, maybe once more. 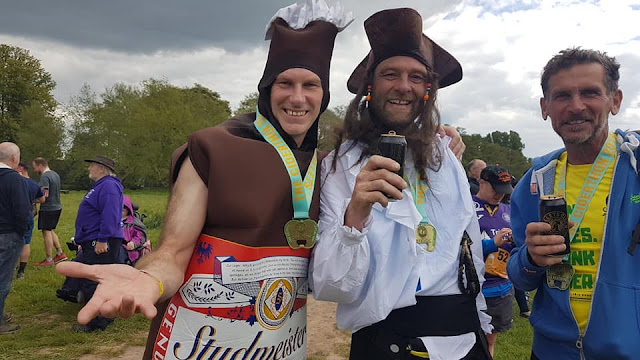