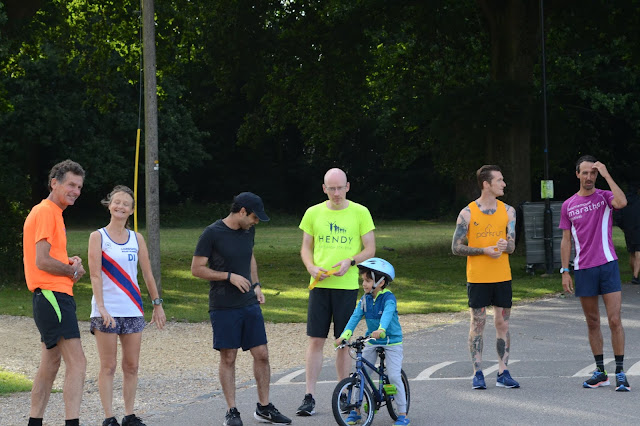 Welcome to Deano’s Not parkrun #2 race report. Back on Route F at Southampton because it’s the easiest route to remember. We were expecting a few others this week as they had messaged me in the week. Disgo Dan was probably relieved that he didn’t have to “not parkrun” this week and did a very hilly run in Sidmouth instead. Must be on a “Staycation” or something? I hate that word but I’m using it anyway because of its popularity and it makes me feel slightly youthful and in touch with modern society. Where was I?

For fear of being late again, I left a bit earlier this morning. My hamstring has been a little tender and sore this week. I couldn’t decide whether to run it slower than normal and not race it or just take some photos. I was tempted not to go at all and just wait to find out how long they waited for me to show until they ran it by themselves. I would like to think they were clueless and that the event or non event would have to be cancelled and they all walked home moaning about how they never got to run. 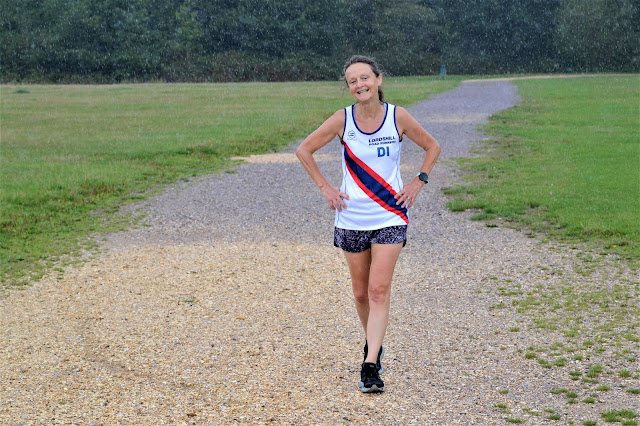 Anyway, I half ran to the common from home after eating two crumpets for breakfast (I definitely wasn’t racing!). I had a backpack on with my Nikon camera and two lenses. I was also wearing a hot hooded top which I was now questioning why I had brought it along. The weather was looking good. Dry and sunny with a bit of a breeze but 40mph winds were predicted to ensue.

I couldn’t believe it. I was the first one to arrive at the start line at 7.50am. Was anyone actually going to show? I wasn’t even sure if I was going to run myself yet. The hamstring felt okay to run though. It hurts to touch it though but then I heard one of Mike Mattingly’s classic quotes in my head “Don’t touch it then”. Makes me laugh. My favourite is still the time I said “I haven’t been to Scotland for 20 years!”. “It’s still there” he replied. Haha. Brilliant. 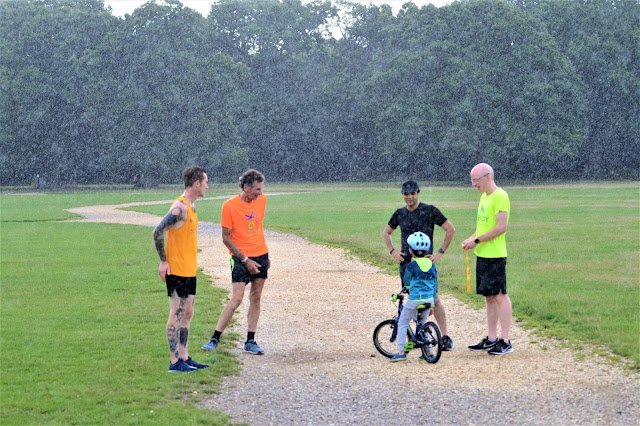 A few minutes pass and Josh comes running over from the Avenue direction. He has a 10k race in St. Albans tomorrow so is taking it easy. This makes me decide to run with him and chat with my heavy backpack on. Di arrives from the right on the path while Mike is coming from the other direction on the path. It’s almost like a red arrow display of Mattinglys. That’s four of us. No sign of Khalid, James, Rob or Trevor. And then fashionably late again comes Kevin Willsher from the East. We chat for a bit and think about getting started. Yay, Khalid,James and Yusuf arrive. Looks like that’s it. James will be guiding Khalid as he is partially blind if you didn’t know. Don’t let that fool you though, he is a true racing snake and stole my third place at Southampton 10k in 2017. I still talk to him though. Yusuf is his 7 year old son and he’s on his bike. It looks like we have a lead cyclist today! Still no Rob Callen or Trevor Hillier though. It’s almost 8.10am and Di is getting impatient. We had better start before someone dies and Di goes to prison. At least they have parkruns now! 5-4-3-2-1…..

Off we go again. Josh and I watch as everyone else darts forward ahead of us. Kev is on a tempo run today. The only real runners we got here today are the Mattinglys and Khalid. Both Di and Khalid are on their comeback tours and hoping to beat one another. I don’t really pay too much attention to what is going on really. Josh and I chat away (like a pair of old ladies according to Di). Di is still ahead of us with James guiding Khalid just ahead of her. No sign of Mike and Kev. The weather is perfect while Josh and I gossip away. We see a few runners we know. Rob and Kim Kelly again. Rosie Essery and Alice Jones. Martin Stevens. Dave Keates. Claire Mcerlean and so on.. 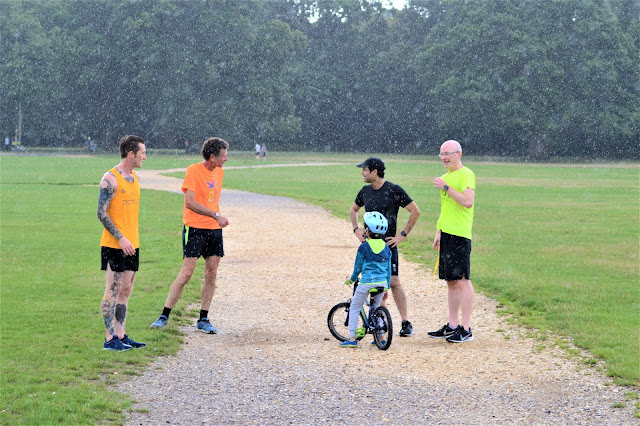 We pass Di but don’t catch Khalid and James. The lead bike nearly runs me over as Josh shouts “Bike”. Jusuf is flying down the hill behind us. Apparently he got a bit lost and doesn’t know the route. Shame Kev didn’t follow and DNF really. Kev knows the route very well. We come to the flats and speedy V60 Mike has already finished. He said he was worried that Khalid and James were going to catch him. They didn’t though. Just as we were about to hit the third mile, the rains pours down from out of nowhere. Well, I guess the sky actually. It didn’t look like it was going to rain. It was pretty heavy rain and a bit of a surprise. Josh leaves me in a sprint finish and Di isn’t too far behind. We stand and chat in the downpour and it feels quite refreshing although a little cold. Not long until it stops though and the sun is back out. Then we see Rob Callen on his parkrun. He was a bit late. Because I said “8-ish” people tend to be in no rush for the start (or so Di reckons). Kev carried on his tempo run and we saw him pass us a couple of times. He later told me that Trevor was waiting at the parkrun start line just before 9am. I should have stated our 8am start time I guess. It was another fun one though. I enjoyed it just as much as when I raced it the previous week and the hamstring feels okay (unless I touch it!). 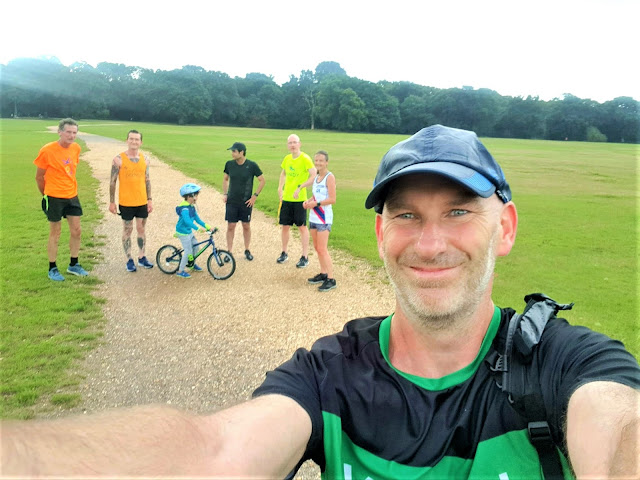 Speedy V60 Mike in second with 22.59 again, according to Khalid who calls him “The Garminless man”.

Khalid lying about his slow 27 minute parkruns and beating Di with 23.30. We obviously can’t let the guide runner beat the runner. James Fanning comes in with a close 23.31. Josh Chivers beats me on the gravel for a 23.45. Some sprint finish to beat me by 15 seconds with a time of bang on 24.00 minutes and last but first lady again is Di Mattingly with another improved time of 24.21.

During the results, I had to do some research and look up some ages. Especially as I got Di’s wrong last week! So, a quick look on “Power of 10” unveiled this:

I didn’t realise that Khalid and James had such fast times. I did know that both Josh and Kev have beaten these 5k times during lockdown but they don’t count..lol. I’m yet to train Di and Mike.

Not sure what to do next weekend but will be heading to the Fareham parkrun course one Saturday morning for an 8am start soon.

Thanks for reading. Happy running. X

After the parkrun, Di told me the sad news that legendary Ron Trodd passed away. Great memories of Ron cheering me on at Eastleigh parkrun. Always smiling, shouting words of encouragement to everyone while sat in his chair on the corner and ringing his bell. I also enjoyed listening to stories from Roger Bradley when they used to race each other. Hampshire running has lost a great. R.I.P Ron. You’ll always be in that corner ringing that bell at Eastleigh parkrun. xx 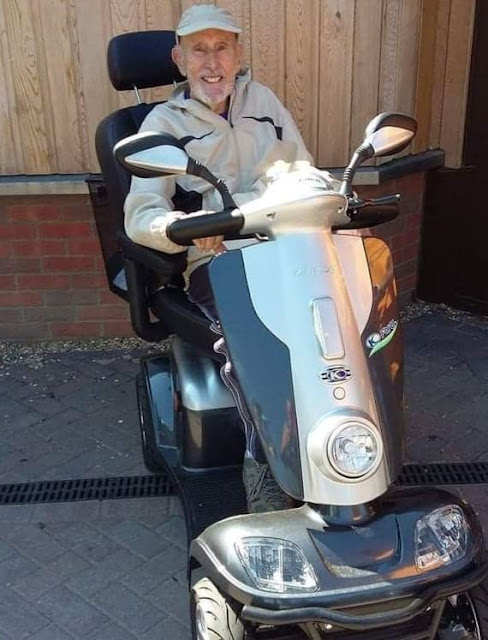