I can’t even remember the first time I ran the Fritham 8 mile loop in the New forest. I got invited along to run the 8 mile loop from the L.O.G.S. (Lordshill Old Gits). It was a wonderful honour. They usually meet one morning in the week. Most of them are retired obviously. They start and meet in the Fritham car park and finish in the same place. The walkers start an hour earlier than the runners and they all meet for beer and crisps in the Royal Oak pub when they finish. Often, you’ll hear.. “Where is so and so? They should be here by now”. There is never any panic though. As long as they have their real ale, they are happy. It is a great gathering and I love sitting there with my morning beer and listening to all the fantastic stories they share. 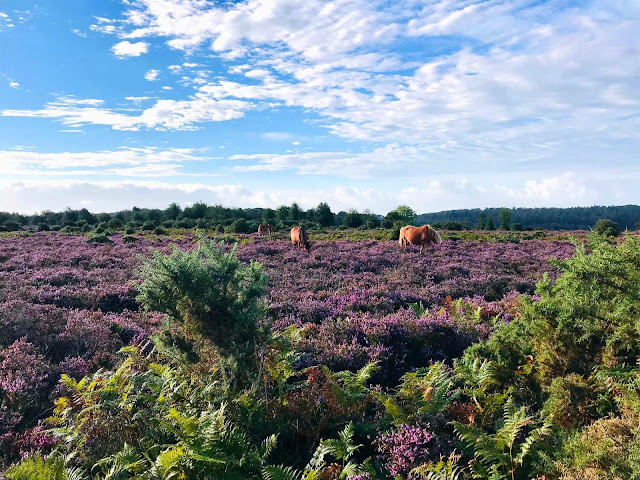 I think I have run it about 8 times over the last 4 years? I usually have Patrick Joseph or Mike Letheren to lead me around. Mike is wonderful to run with as you can learn a lot of history about the route you are running with him. Patrick is also wonderful to run with too obviously because it means I don’t get lost and die.

I met up with my friend Vicky and her lovely dog Articulus before I moved to Wales and we tried to walk the route. The weather was very challenging though with strong winds and torrential rain. I had also forgotten my gloves that day. We got halfway around and we didn’t get lost. We chose the correct paths and gates to go through but sadly the amount of rainfall meant that we couldn’t get across the river and to the bridge to complete the loop. We can no choice but to turn around and head back to the pub. By then my hands were bad. I get really severe Raynaud’s diesease. They were pale and numb, there was no feeling left in them. I couldn’t even untie my show laces or take my t-shirt off. My hands were unless. It was a scary moment. Eventually I managed to get them warm by whacking them on things and rubbing them intensely. Ha. What a day, but no regrets. It was still a great adventure and it’s so rewarding when you sit by the open fire drying off, drinking beer and eating a vegan ploughmans.

Fast forward to today. Kevin Willsher and myself had been chatting about running the loop for a while. I was pretty confident after Vicky and I went around that we wouldn’t get lost. He picked me up just after 7.30 in the A.M and he drove us to Fritham. We parked and got ready. The sun was out, it was a nice day. Shorts and t-shirt weather. A vast contrast to my last visit. We started the Garmins and ran from the car park and headed to the left. Easy gravel trails to follow with an open land of gorse bushes and ponies. We got chatting and Kev mentioned a big, white house. “Do we run towards the big, white house?”. “Yes, Kev” I said. We went left at the first fork and then had to walk a little bit due to Cows and calves on the path. The running soon resumed. We headed downhill towards the white house. It was then that I realised that my surroundings were unfamiliar, yet Kev had run this way before another time. We stopped at the bottom of the hill and paused the watches for a discussion. Do we continue along the path or turn around? We decide to head back which means running uphill and back to the junction. We take the path on the right this time (now our left) and head through the gate.

Back to familiar land. We cruise down another hill with piles of tree trunks bundled on top of one another and a forest of very tall trees on our right. I keep an eye out for any deer as I have seen them here before. Nothing, but there are no people either. Very peaceful with just the sound of our breathing and footfalls. Not entirely true though as I am not long chattering away about my birthday weekend in Weymouth in two weeks time on the 12th of September. My friend Carl from Cornwall is coming down and we’re running a 16 miler or so from Weymouth beach to Portland lighthouse and back, followed by lunch and lots of beer and staying in Weymouth on the Saturday night. Anyone is welcome to join us for either activity, or both.

Anyway, all this chatter and we come to unfamiliar ground again. Not unlike last time, it’s only until we have run down a big hill that I notice this. Kev mentions that he did see a gate on the left a while back. We jog back up the hill while I feel embarrassed to have got us lost twice already in the space of about three miles. We jog back up the hill and sure enough, now on our right is a turning with another gate. I recognise it as it has a little mosaic of mirrors on it. The surroundings open up again and we are back to running in fields of gorse bushes and more ponies. I can also hear the Stonechats with their distinctive calls. The route isn’t so obvious here but I remember this bit well as we run on a narrow sandy track and then up another little hill. Ahead is a big forest of trees. We run towards them as we rejoin a gravel trail. The Heather looks at its best today. Such bright purples everywhere. You can now see the ridge we will be climbing and running on top of on the right hand side. It looks far away and I guess it’s about another three miles away if you run the correct L.O.G.S route.

We come to another gate and enter an enclosure. It’s a nice change again as it’s dark because of all the towering trees covering us. The air smells so pure and clean here. Last time I was here Articulus was chasing deer into the woodland. We should have run about 5k now but we’re over 4 and a half miles in. We were both running/jogging at an easy pace  as Kev did his first 3k time trial last night and got under 10 minutes! I also did some speedwork. 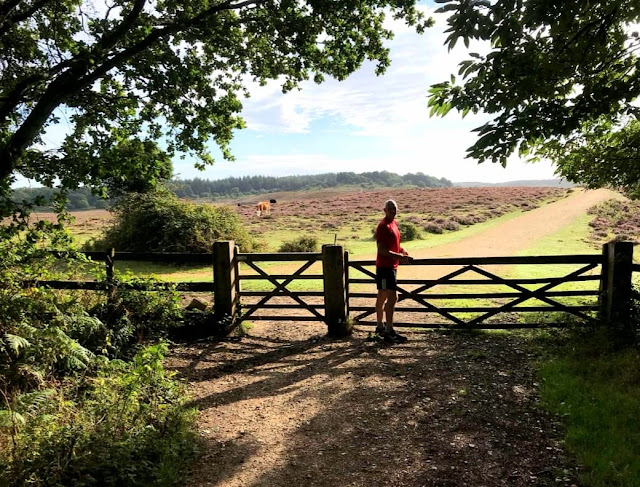 I was breathing a bit heavy today but enjoying the run so much. We exited through another gate and continued. We were looking for the bridge to cross the river now. This should be the halfway point at 4 miles. However, we had done 10k already but neither of us were too bothered. And then… I got us lost again. We should have turned right earlier to the bridge. We found another, newer bridge but it was the wrong one. So we backtracked and followed the river and had to jump it getting slightly wet feet but not soaked. Yippee. We found the small bridge. We ran uphill and passed a house/farm on the left and at the top of the climb is a road. You now turn right and downhill before the big hill climb arrives. Now I was sure that we couldn’t get lost as there are no more paths to choose from. Just this one gravel path. We climb and climb onto the ridge and it’s worth it as we get to my favourite part. You look to the right, where we were three or so miles back and you can see for miles. Lots of lovely scenery. Mostly a greenery of trees and scrubs. Wonderful! Sadly, the sun had now gone in for the photos.

I got my breath back and we carried on. It’s fairly flat now for a while until you get a nice blast downhill into the trees again a mile or so later. We followed the path which veers one way and then another and we cross another bridge. Back amongst the tall trees until we climb again. I tell Kev that we are nearly there but this isn’t the final climb. It seems to take a while until we encounter it. One more slog uphill to the finish of the car park. It is usually exactly 8 miles but today I get 10.6 miles. Although we got lost and stopped to take some photos, it is the quickest I have run the route. I averaged 7.59 pace which surprised me. No wonder I was struggling with the breathing despite the stops.

On the way around I was chatting to Kev and telling him how I wanted to organise a small race here. A perfect start with a car park, hardly any people around and a finish with a pub! I reckon I would need a few marshals though but then I thought I could cycle around before the race or jog and just put out some signs with arrows on. Maybe print a map or recce the course with people a few days before the race. Maybe create a gpx file? No-one to open the gates though, but you can do that yourselves. It would just be similar to the little “Not parkruns” though. Turn up with your Garmin. Run the 8 miles, upload to strava and I’ll steal the times and process a leaderboard/results page. Maybe a prize for 1st place? If we have 10 runners and everyone pays £1, the winner will get 2 pints and a bag of crisps at the Royal oak..lol. Just a bit of fun really. I definitely want to see how fast I can run the loop. It does get very muddy in the winter, which will add to the fun. Let me know if you’re keen or have any ideas and hopefully I’ll sort something out. 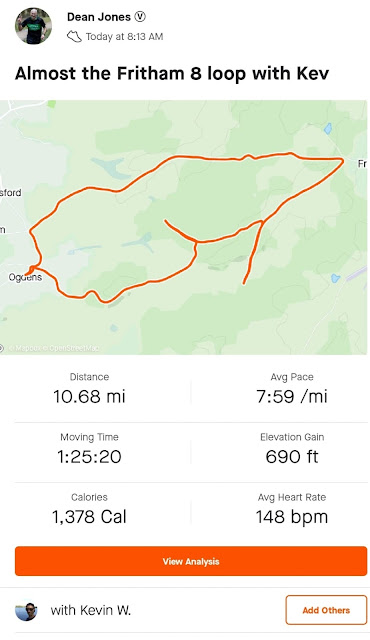