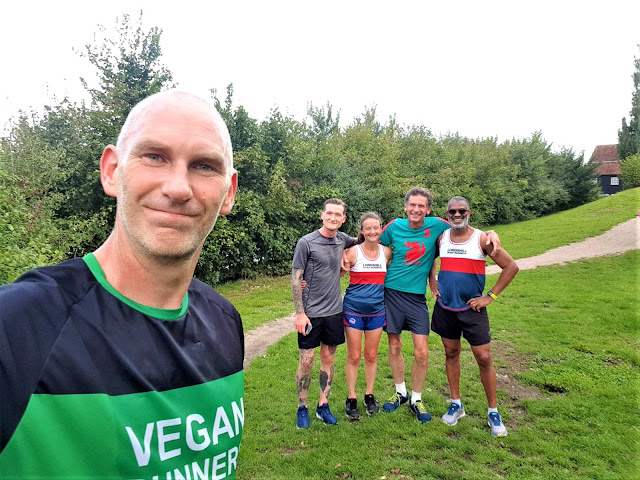 Let’s not do, not Fareham parkrun someone said last week at not Southampton parkrun. I think it may have actually been me and I wasn’t expecting anyone to join me really. I was going to get the train stupidly early. I don’t sleep anyway. God doesn’t let me for some reason.

I like the fast, flat course at Fareham and tire of Southampton not parkrun after completing the proper parkrun 80 times over the last 8 years when it started there. Anyway, Josh said he was keen and so did Di. Yay, there would be 3 of us at least. I wasn’t sure if husband Mike would be in attendance, I was hoping so though.

It had rained a lot last night and  it reminded me of a time I did proper Fareham parkrun and there was a massive puddle in the woods about a half a mile/800 metres. My feet got soaked, it was deep enough to cover my shoes. This prompted me to inform my crew of this story and to bring a change of socks and a towel. No-one listened. Which isn’t unlike most of my friends and family. Would you listen to me? 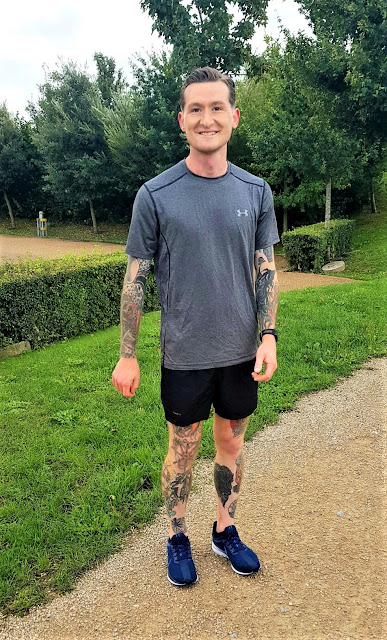 Josh picked me up just after 7.30am. He drove us to Fareham enquiring about the right junction to turn off at. He may as well have been chatting to a two year old. People ask me for correction junction exits all the time. Instead of saying “I’m not sure/I don’t know”, I will guess and call it something like instinct and 9 times out of 10, I am wrong.

Anyway, it turns out he knew which exit to take and Di had phoned me to say that they are running a bit late. “DO NOT START WITHOUT US!”. Not only is Mike on route, we will also be joined by the lovely Patrick Joseph, another Lordshill legend. 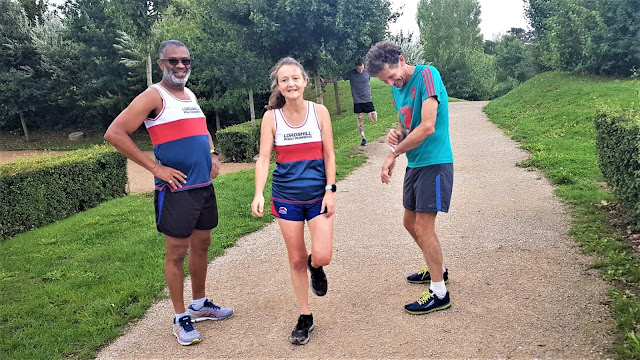 We pull up at the Cams Mill car park and I’m reluctant to get out and warm up because it’s actually cold this morning. Autumn is here! I get out of the car in my hoody and not long after the rest of the crew turn up. It’s already time to ditch the hoody and warm up. We do the whole course as a slow warm up run. The puddles weren’t too bad. The worst ones could be ran around and avoided. There were a couple of muddy areas but nothing to worry about it. I was also a bit weary that it might be busy on the narrow gravel path. Maybe we should have got here earlier? 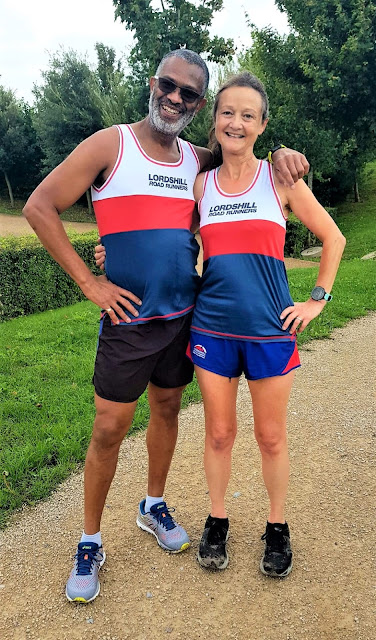 The warm up felt hard and I don’t feel completely empty if you know what I mean? Despite not having any breakfast. We’ll see what happens! Where Mike has no GPS watch to record a time on, I make everyone wait at the start until the exact minute of 8.18. That way, I can glance at my watch and do the maths, that’s assuming that Mike doesn’t beat me. Josh draws a line in the gravel to mark the start line and I count down. Off we go, straight down the grassy hill. Josh had blasted off ahead and ditched the path for the grass. We all shout abuse at him and call him a cheater, even though he still has to record the entire 5k or 3.11 miles on his watch. I am sandwiched between two Lordshill vests but manage to squeeze through. We run along the path next to the road and head for the trees. Josh is quite far ahead already. I knew I had no chance of catching him. I wasn’t sure how today was going to go. I had no real time in mind. I would like a sub 20 but didn’t feel fit enough. Sub 20.30 would be great though. I didn’t look back once so don’t really know how the others were getting on. I felt pretty good though as I glanced to my left to see the golfers on the golf course. 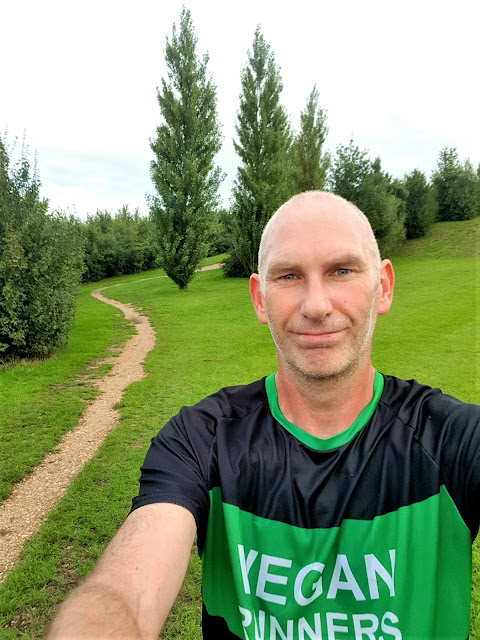 There were two cyclists ahead which Josh had obviously passed. Would they let me through. I wasn’t stopping. They heard my footfalls as I neared and they stopped on the left and let me pass. I thanked them. I hadn’t looked at my watch for 3 quarters of a mile, which was unusual for me. “Just run Dean” I kept telling myself. 6.18 for the first mile. A bit fast? I feel fine, keep going. I passed a few more people and a runner coming back towards me. I could just about see Josh in the distance “Never gonna catch him am I?” I say and smile. He laughs and looks around at Josh disappearing too. 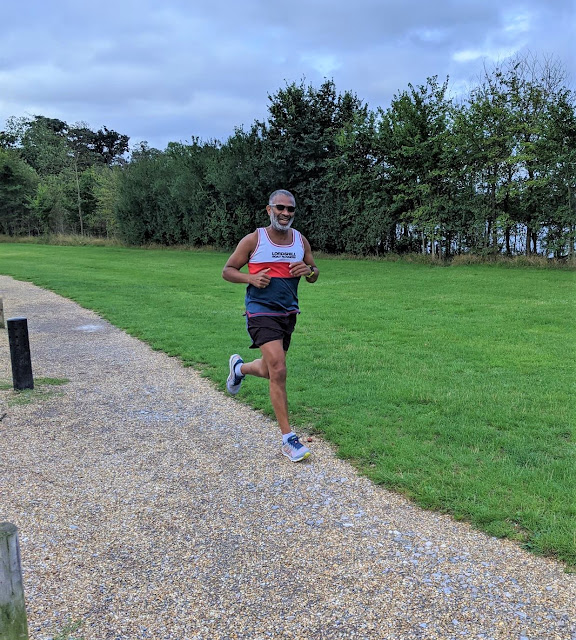 I was hoping to see Josh on the return route by now and it wasn’t too long. Fareham parkrun is an out and back route, so you know you are halfway at the turn around point. Also, an older couple on their bikes shout “You’re nearly at the turnaround point, Well done”. I was glad to hear that as I was now suffering. Funny what a difference half a mile can make. Josh later told me that the couple also told him about the turnaround point coming up. He also told me later that when he passed me on the way back that I looked terrible..lol. 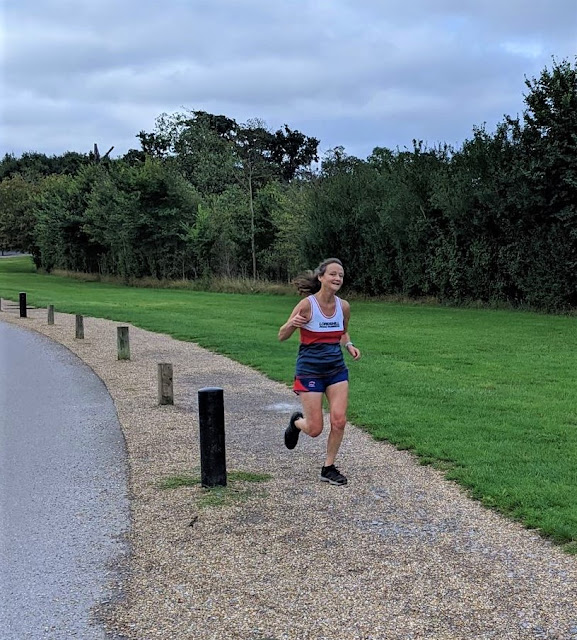 One of the best parkrun things I have ever seen is at Melksham parkrun. They also have a turnaround point and they call it “The Bonnie Bollard” and on that black bollard is the face of Bonnie Tyler who famously sang “Turnaround”. It also stops you from running into it. Genius!

On our warm up, we decided that the turnaround point here should be around a big puddle. Just circle around it and back you go. Yay, I was halfway there and definitely living on a prayer. I think I went out too quick. Running back was good though as I got to pass Mike, Patrick and Di. I couldn’t really say too much. In fact, I think my encouragement skills were very weak. It was great to see them anyway. I hit mile 2 in 6:30. I have obviously slowed. 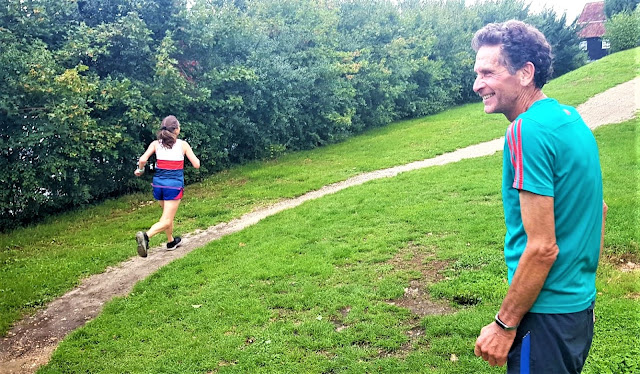 It got me thinking that I had never sub 20’d on this course. What was my PB here? 20:05, 20:10 something like that. Some easy maths followed. 6.27 for the next mile would get me a very close sub 20. I glanced at my watch and it said 6:27. Was I being negative or realistic? I was suffering a lot, I knew that much. I can’t hold 6:27 for this mile. I am slowing and struggling. I got my head down and pushed on regardless.

I came out of the trees and to the open land where I could see the estuary to my left, there was a strong headwind. Great! Just what I need.

I was really suffering now and averaging a pace of 6.45 for the mile. Game over. There goes the sub 20. I won’t give up though, plus I really need the toilet now. I get to the point where I am wondering if I’ll finish and how long will it take to get my bag from Josh’s car for some toilet paper. But then I’ll miss taking photos of the others running in too. 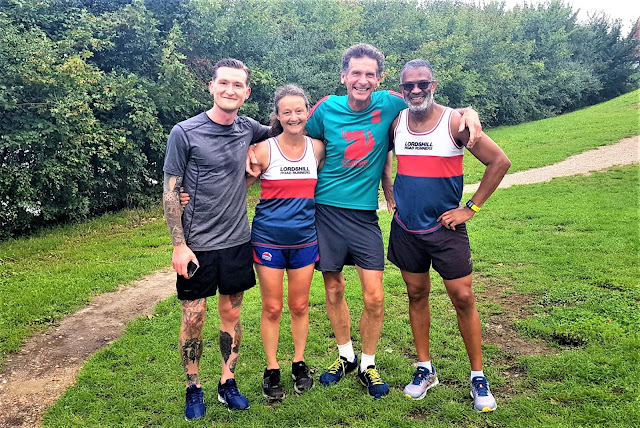 I can see Josh doing a cool down. He shouts encouragement as I give a final push. I look at my watch, 20:01. Damn. I have to run back up the starting hill to get my 3.11 miles. I stop my watch and I am exhausted and gasping for air. Josh says something but I’m struggling. I ask for my bag and ask him to take some photos while I find a quiet place to empty out. I am so dizzy and struggling to breathe though. The urgency for the toilet seemed to dissipate. I walked around and cheered the others in. Mikey, then Patrick and then our first lady again, Di. 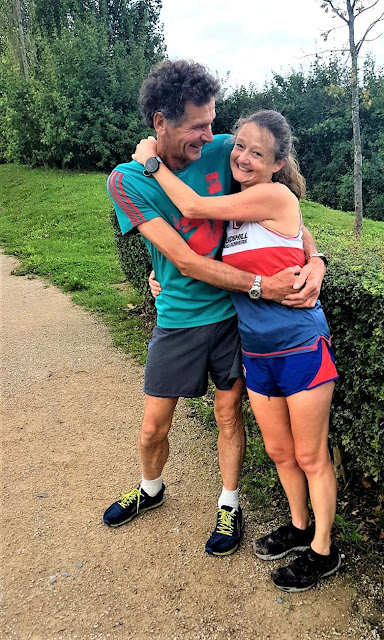 I was now having a panic attack and my vision was distorted. Maybe I ran a bit too hard today knowing I’m not that fit yet? I calm myself and then manage to work out that I am having a retinal migraine. I have only ever had two of these before and they are weird. You get a flashing of light in one eye and it messes up your vision. It is caused by the narrowing of an artery in the retina. Stress can trigger it but there are many other things too. It is nothing serious but it usually comes with a painful headache later though. Hence the name of Retinal migraine I guess. We go to Tesco and enjoy a Costa. The visuals are back to normal and so am I. Well, am normal as a Dean Jones can be. I am relaxed and happy now. I am very pleased with my time, as is everyone else. Josh flew around in 18:22. Even though he got a 10k PB last Sunday of 37:03 at St. Albans. P2 for me in 20:09. Which is actually a course PB for me as my quickest official time is 20:16. Maybe this course isn’t as fast as I thought? Although Mikey comes in P3 with a faster time of 22:45 this week. Not long afterwards comes Patrick with a time of 23:33. First lady for the third weekend in a row is Di with a sub 24 and a great time of 23:56.

It was lovely to go for coffee and chat after. Mikey reckons we had a nice tailwind on the way out on the course which probably helped with my fast first mile and it looks like everyone’s last mile was their slowest. 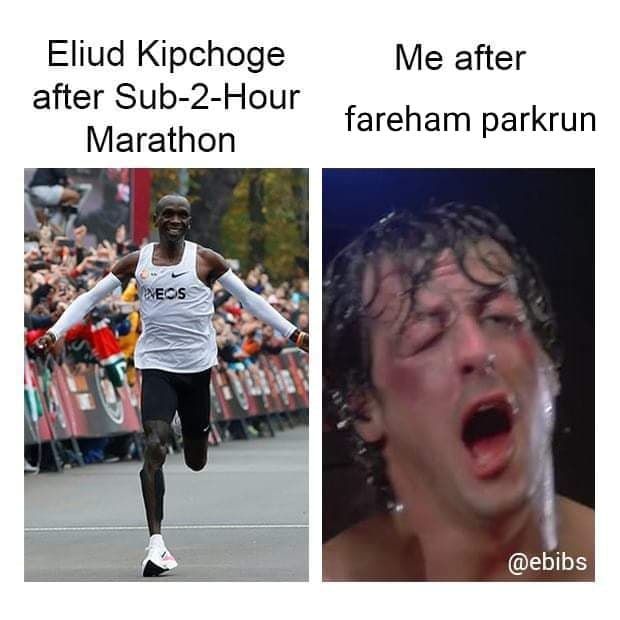 There is talk of not Southsea parkrun next weekend. Come and not join us for a speedy course and not breakfast. We’ll aim for 8am again hopefully. If you do come along, don’t be upset if I get your age or sex wrong. I got Di’s age wrong the other week and I’ve guessed Patrick’s this week. Currently nothing has been said in the time of writing, so hopefully I did good. Sorry that the report is mostly about me. I’ll see if I can get one of the others to write next week. Thanks to Josh for the extra photos.. Cheers for reading.x