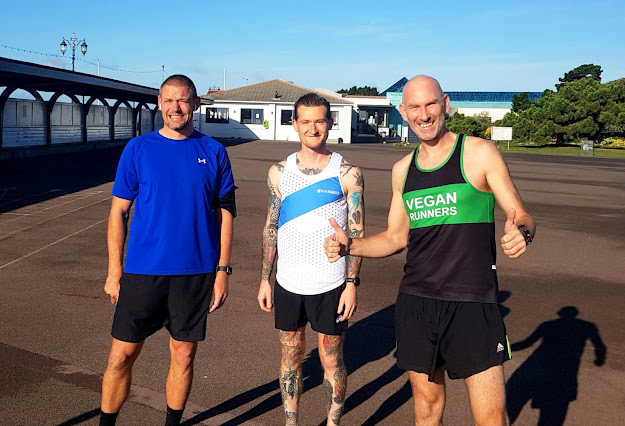 It's Saturday so that means two things: I've woken up stupidly early (5:40am, I always beat my alarm!) and it's time to get ready for 'not parkrun'! Dean always tells me I shouldn't eat anything before a 5k but I'm tucking into a jam & PB bagel at 6am, I hate running on an empty stomach. 7:20am and I'm parked up at the Tesco Express opposite Dean's house.

As he gets in the car he tells me the M27 is closed from Whiteley to Fareham (this will come back to bite us later!) so we turn off onto the A27 chatting about running, books and last night's Brussels Diamond league (thankfully Dean didn't spoil the results for me!). I love having Dean as a passenger as I almost always leave the car having learned something new! Today I learned to listen when Dean tells you the M27 is closed! 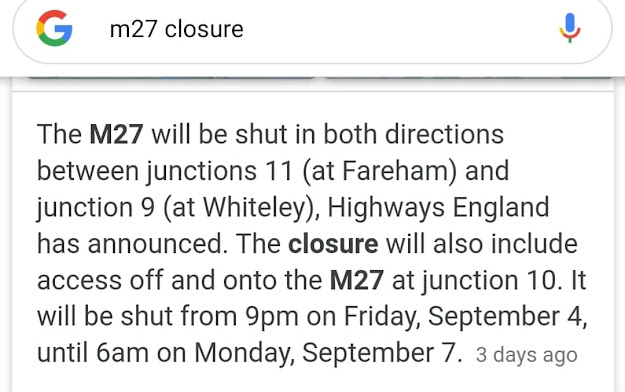 We get to Southsea for about 8:15 and Greg is already there waiting for us at the parkrun start point. We run a short 1 mile warm up back towards the Pyramids Centre catching up with Greg about how his vert skating is going, back in July he built a vert ramp in his back garden and has clearly been hitting it every chance he gets judging by the bruises on his feet...anyone for breakfast? (See photo below). 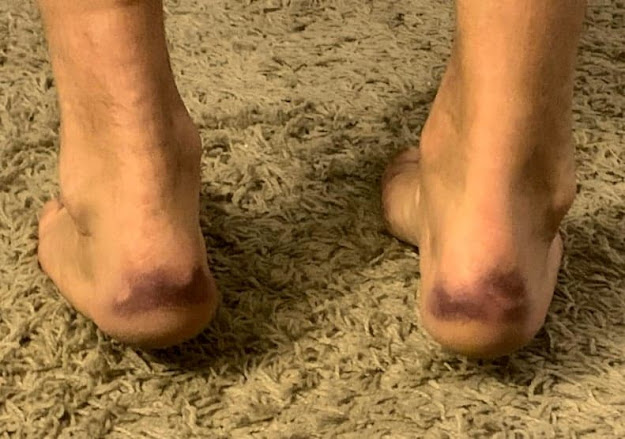 Dean says he wants to try for sub 20 today if he can and Greg says he'll be happy with anything faster than 30 minutes, they've both ran faster than this before so I'm sure they're going to get it. I haven't run with Greg for a long time but last time I did he ran a 24:47 but I believe his PB is somewhere around the 22:30 mark (Sorry if I'm selling you short Greg!). I felt like trying for a PB today as Southsea is a very flat out and back course along the seafront and I was feeling good this morning. We line up and Greg counts us in "10.....7,6,5" I nearly jump the gun, confused by Greg's unorthodox countdown. 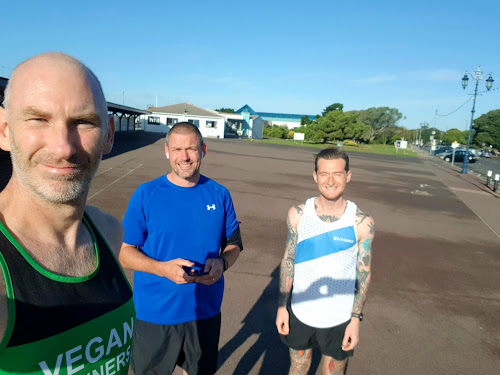 150 metres in, I check my watch and realise it hasn't quite caught up with me yet and yell back to Dean "I'm only running at 4:15 pace". Disclaimer: I work in kilometres and know this annoys Dean as he works in miles, so naturally I tell him my splits in kilometres wherever possible. The seafront is very quiet for a Saturday morning, no wind (yet!) and very few pedestrians and dog walkers to dodge. Like I said, the route is an out and back on the Great South Run's final stretch so I'm lost in thought about how much I enjoyed last year's event, sadly it's been cancelled due to some virus you might have heard of that's been making its way around the world! 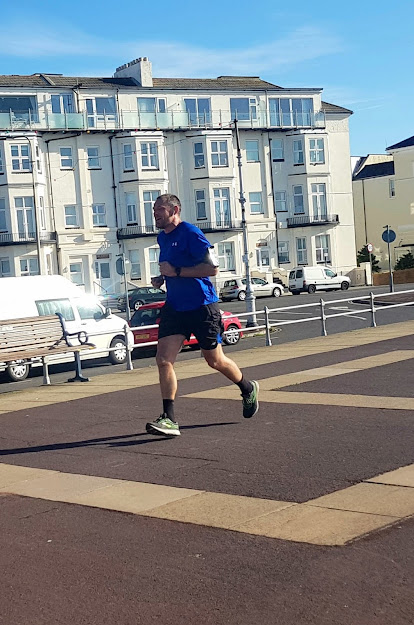 First kilometre (Sorry Dean!) in 3:28...as usual I've gone out a little ahead of pace but I'm sure that's a feeling most runners are familiar with! I'm feeling good though so I push on still lost in thought about GSR when I hit the 2k mark...3:31 and we're ahead of schedule for a PB (17:52 which I set about 4-6 weeks ago).

The turnaround point comes before I know it, I turn around and see Dean very close behind, he looks stronger than last weeks not parkrun at Fareham and I'm sure he's on for a sub 20. 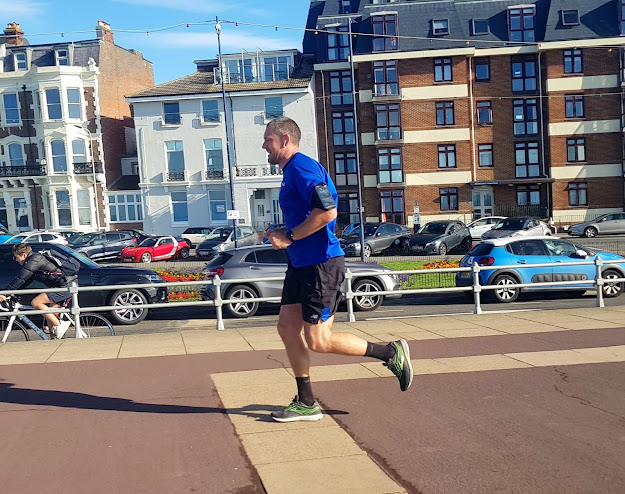 As I'm making my way back I realise there's a headwind, I feel my fast start might be catching up with me too which is confirmed when I run through my third kilometre in 3:34...uh oh! I'm starting to slow down and my brain starts telling me to bin it off and just go jump in the sea (not yet, shut up brain!). I have also passed Greg at this point who is looking strong also, definitely well within his 30 minute goal.

The 4th kilometre passes in 3:44, I'm struggling at this point but remember my rule for parkruns/interval sessions: "last one, fast one!" so I dig deep and push on, as I get to the pier I can see a PB slipping through my fingertips, despite digging deep for the final 400m I finish my final kilometre in a time of 3:39 which gives me my 2nd sub 18 in a time of 17:57. I'm very happy with this so lay on the ground panting for a few seconds (think of a broken leaf blower!). 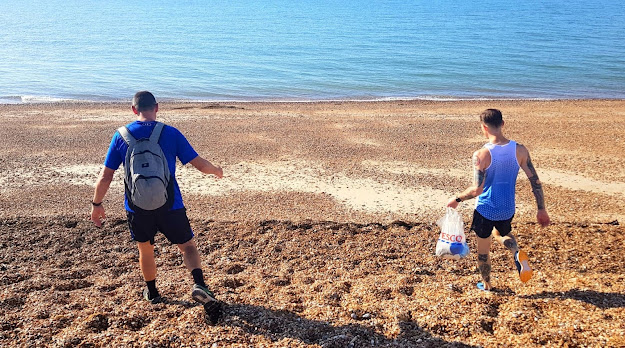 After a few minutes I spot Dean coming in, it's going to be close and he looks like he's working very hard for his final 200m. He looks a little disappointed as he tells me he finished in 20:24, an amazing time as he's only recently come back from 12 weeks of not running due to a hip injury. Dean walks back down to get some photos of Greg coming in to the finish telling me he felt the headwinds too (glad it's not just me making excuses).

A few minutes later Greg comes in well under his goal time in 23:57 made even more impressive after he tells us he skated vert for 4 hours yesterday. 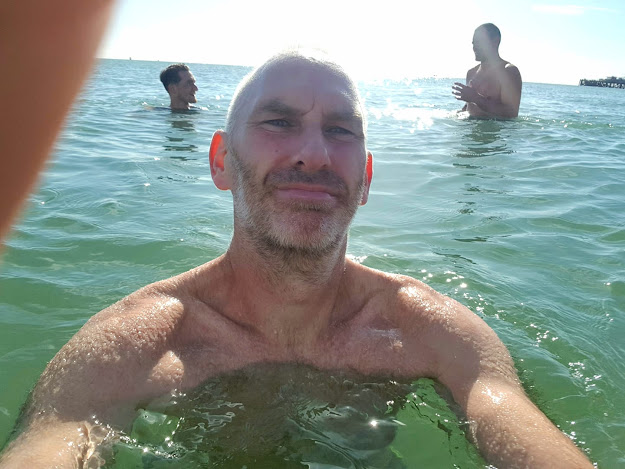 With the run done it's back to the cars to grab a towel and we're straight into the sea, all the tightness in my legs melts away instantly. It's surprisingly warm (I know what you're thinking!) After floating around talking about running and skateboarding we all realise we're starving so we dry off and head to a cafe called Hunter Gatherer Coffee, all the stuff on their menu is either vegetarian or vegan and tastes amazing! Greg clearly thought so too as he decided to order two breakfasts...he'll burn it off easily after running and skating vert all day.

After sitting around and chatting more running, woman and skateboarding it's time to head home. Do you remember at the start where Dean told me the M27 was closed? I DIDN'T. As we come to a stop about 5 minutes after getting onto the motorway I realise we're in for a long wait, thankfully Dean was in the passenger seat to supply more good stories and tunes! After an extra hour of listening to music from our old favourite video games and skate videos we arrive back at Dean's where apparently I stole a parking space off a very 'happy' lady, I'm too tired to argue so I say bye to Dean and head home to try do the best job I can of being the Diary Of A Headless Chicken guest writer I can...let's see if I'm asked to come back and write another! Today's not parkrun results were: Josh Chivers 17:57 Dean Jones 20:24 Greg Nowik 23:57