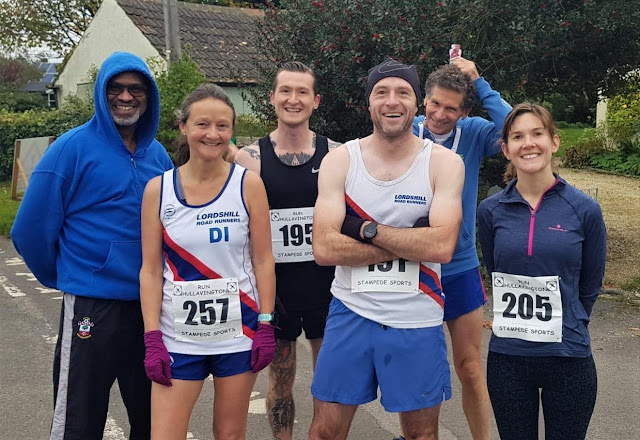 My mate Josh says “Hey Dean, fancy doing this half marathon?”. Before you know it, I’ve entered this race called the Hullavington half. It’s in Hullavington, in Wiltshire. I know, I never heard of the place either but it’s a village near Chippingham. In the car on the way up we are discussing how you even say the place name… “Hulla-ving-ton”, “Hull-vin-ton”. “Hul-lav-ing-ton”. We gave up and became non the wiser as we forgot to ask someone at the race. 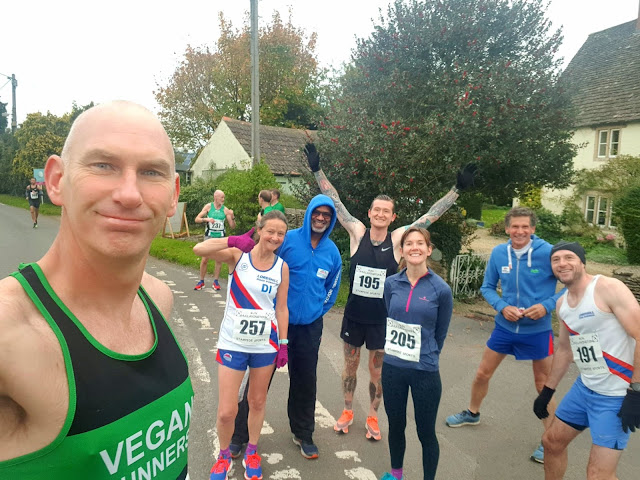 Anyway, this race thing spread like a virus. I told Di about it and she invited 15 of her closest friends. Lucky we were only allowed 200 entrants really! Josh drove myself, himself and the senior Mattinglys. We met Patrick Joseph, Angela Lee, Ian Bower and my awesome mate Chloe Elliot who I hadn’t seen for about two years since she got me lost on the Cotswolds, got me drunk and stuck me on the wrong train home resulting in me sleeping in a really expensive hotel in Bath. One of the best adventurous days ever, in fact.

Josh found the race and car park with ease. The good thing about the race rules and limited number of runners is that there aren’t any problems with finding parking spaces. I still had to queue for the toilet though as there were only 3 portaloos. Our numbers were sent out in the post so not much interaction was required. It was easy to find everyone we knew and formed a little group by the start as we waited for our starting times. I think Angela was first to go. Ian was supposed to run at 10.22 but started in Josh’s wave at 10.23. They were both aiming for 82 minutes apparently. Was great to watch them run out, do a 200 metre loop or so and then run past us again. I took a couple of photos. Meanwhile, Chloe was running around looking for somewhere secretive to go to the toilet as the queues were still lengthy.

I was waiting for Chloe to run past so that I could get a pic before I started in my wave at 10.27. I didn’t have time to get the photo though. It was 10.27! I went to the starting pen where I was briefed, briefly. Ahead of this group it looked like my wave was about to start so I rushed forward. “10-9-8…”  “I think this is my wave” I said “10.27?” I added. You’ve missed your wave as well the man sighed. He took my number (I think) and the countdown continued. “2-1”. We were off. I went out pretty fast. About quarter of a mile in, I was ahead of the pack and running at 6.06 pace (in miles). I slowed and let a few people overtake me. Then I saw Chloe running towards me smiling. “You missed your wave as well?”she shouted. “Yeah” I replied laughing. 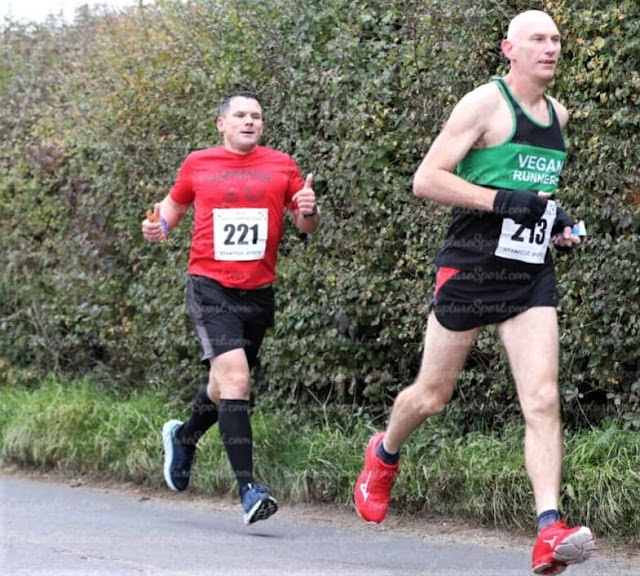 I think the start was a bit of a mess to be honest. We weren’t aware that you had to be temperature tested at the start and that your name got crossed off the list. It wasn’t obvious enough for people to see. Some people didn’t even know, so that affected the results as well as the starting waves as it was gun timing at the start and chip at the finish line. I can only imagine that the results are a right mess. It didn’t bother me though as I knew from a previous race I did, I got a pb at Trowbridge 10k with the same company “Stampede sports” and realised afterwards that the courses are not UKA races, so would not appear on Runbritain or Power of 10. It was just so great to be competing and racing again. 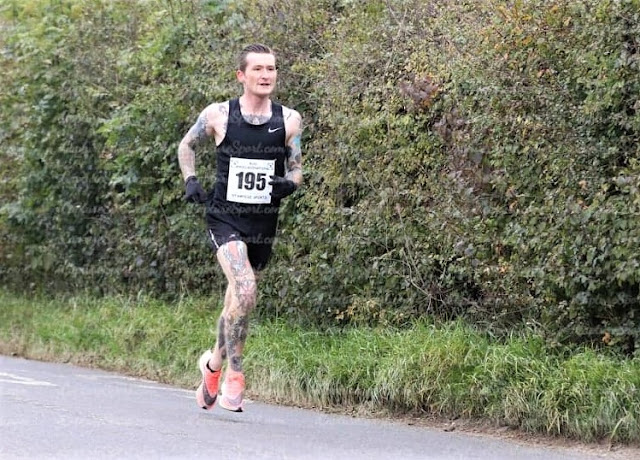 The course was described as “Mildly undulating”. I usually think that this is the work of the race director who is taking the piss. It will be hilly right? Wrong, it only had 400ft of elevation in total. My last race, the Newport half had 200ft more elevation than this and it was advertised as “Flat”. I had tried to run a sub 90 at Newport in March and failed miserably with a 91.30-ish time.

Today, I was hoping to run 7’s. 7 minute miles which would get me the same 91.30. I had put on 16-18 pounds since my return from Wales in June and was only running an average of 25 miles a week after being out for 2 months with a hip injury due to over training. 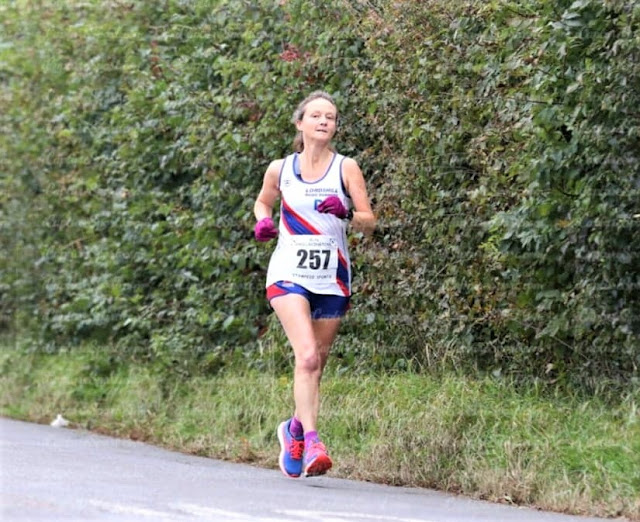 My good mate and V40 legend Kev Willsher said I had a sub 90 in me after running a virtual 40.40 10k a couple of weeks ago. I argued that it was twice the distance and my weekly mileage was low. This got echoed by Rob Agar. “You definitely got a sub 1.30 Deano!”. Were my mates idiots? I gave it some thought and Josh repeated the same thing. Ok, I’m just going to run and try and average 6.53 for each mile. Not being a flat course would mean it would be hard to average each mile, so I would just be doing calculations on the way around. Adding and subtracting the minutes. Of course, I was expecting to blow up at 8 miles and get a 93-94 minute race time anyway. 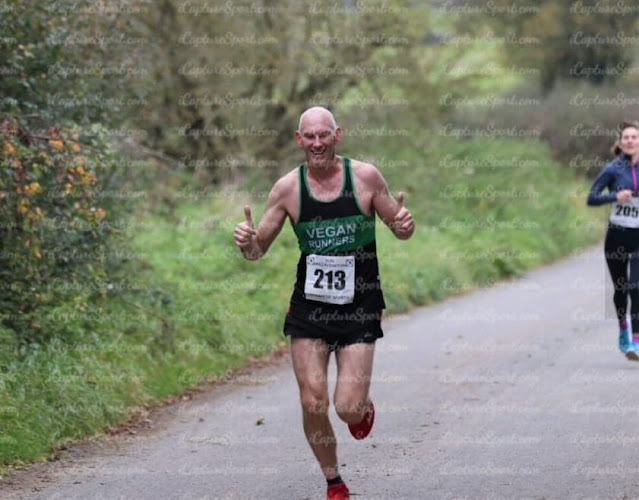 Everyone in my group had passed me but I was reeling them back in now and passing some of them slowly. About a mile and a half in, I took my gloves off and left them with a spectator under a railway bridge. “I’ll be back for them later” I said. The first mile was pretty quick but it was an easy mile and I was feeling great. I kept telling myself to relax, get into rhythm and calm the breathing. Just over 4 and a half miles in was our first water station. I was sick of carrying this energy gel around so I was going to take it now. I would usually take one gel at around 6 miles in a half marathon race. I didn’t know where the next water station was anyway. I thanked all the marshals on the way around and chatted to a few runners. I was feeling great. 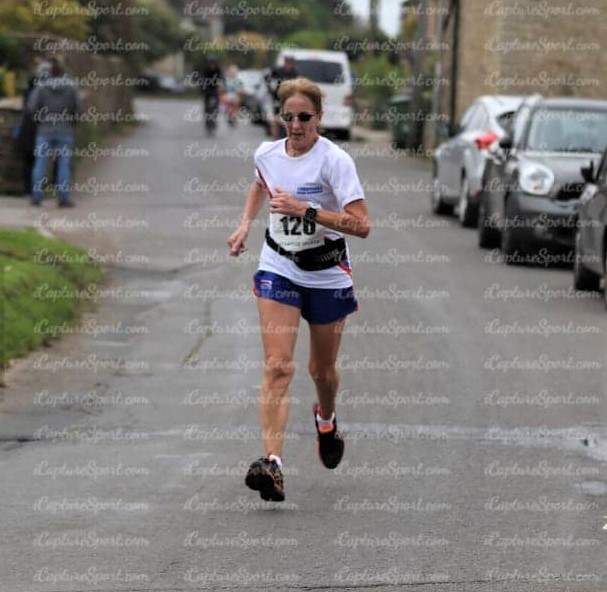 At halfway (6.55 miles) I hit a time of 43.30-ish. No way I was going to get a negative split today then. I caught up with Chloe and we had a bit of a chat. She said it wasn’t going to be her day and went out a bit quick. I tried to urge her on to run with me but sadly we had just hit a downhill. I always blast down hills at sub 6 pace no matter what the race or distance. I love it!

Sad to leave Chloe behind though. I was doing to maths in my head while looking around. It was mostly long, undulating country lanes. I was close to getting hit by a 4x4 though when I decided to overtake a runner and the driver didn’t slow down. He tried telling me off but I just laughed it off. “I’m racing dude”. 10 miles in 68.30. Hmmm.. I wanted closer to 68 minutes than that really. I was starting to feel it now. I was working out that if I ran 7’s now it would be a 21.45 5k. Not quite quick enough for a sub 90 half. The race had now begun. I would have to run 6.50’s for that sub 90. I kept on telling myself that I wasn’t that bothered. 90 or 91 minutes would be a season’s best anyway. 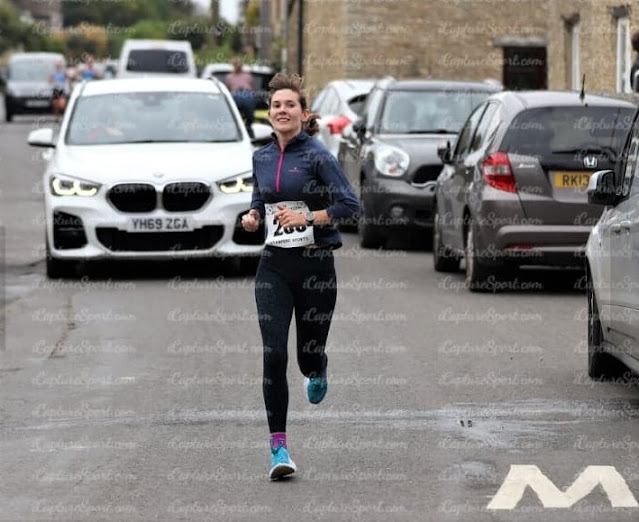 I ran a pretty quick 10th mile which was good as mile 11 was quite a tough one. I was struggling now. No more waving at cameras and thanking marshals. The head was down and I was driving forward with a my might and remaining energy. One mile to go! This is going to be close. I bet I get 130.01 or something. Shut up and push Dean! I ran hard. My hamstrings were tightening now and my stride was getting shorter. Then I saw a Lordshill shirt. It was Angela. I managed to say hello but later she would take the piss out of me for not saying much to her..lol. I was definitely in the hurt locker now. 13 miles. Geez. This is close. Sprint dude, sprint! I can’t even sprint with fresh legs but I definitely felt a surge in speed. I crossed the chip mat and stopped my watch. 89.51! Done it. I was staggering around like a teenager on the Lambrini now though. 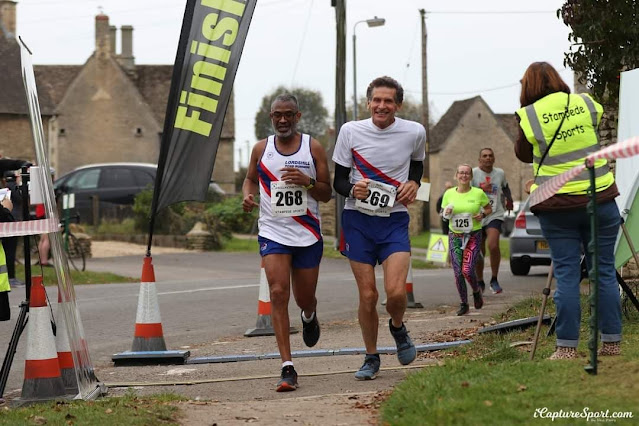 I picked up a medal off the table. Lots of cake but no vegan cake. I didn’t want cake, I wanted water. No water at the finish though and no bag drop either. Could be a bit dangerous I think. I start walking back to the car and Bower comes down the road telling me Josh did a 1.19 and that he himself had got 1.22. Totally amazing times. I carried on hobbling and bumped into Josh who then offered me some of his water. We were so happy. It was so great to be racing again. What a day. Back to the car and changed. I said goodbye to Chloe as she had to rush off. She was a bit disappointed with her 95 minutes though. Like me, her fitness had dropped off after the summer but still a great time. We all met up and decided to go for a pub lunch and some beer. It was the best day I had in ages. I miss race days with friends so much. I’m glad we can still do this stuff. I am now looking for a race to do in December I think. A bit more time to train and recover from this race. It was a fantastic day and event though. Thank you Stampede sports.x 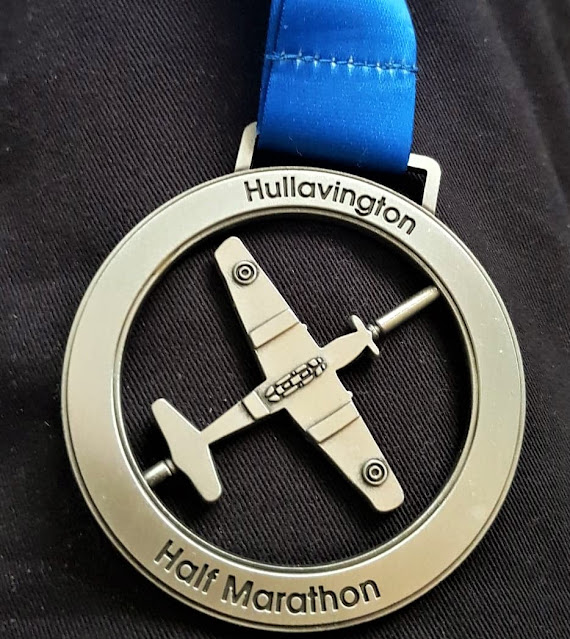 A new course record was set by Adam Stokes of Bristol & West AC with a time of 70.09. 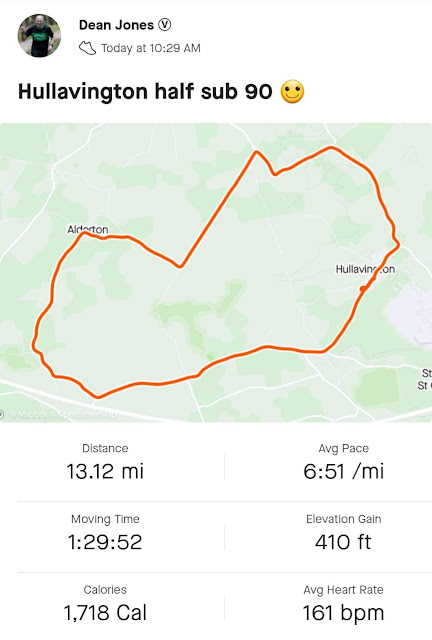