With the legendary Vegan runner Mike Harper moving away to North Devon, there was one last chance to meet up locally before his move. Winchester parkrun was the choice. It wasn’t an official Hampshire vegan runner’s meet up but a few of us were heading there anyway. I still had some unfinished business with this parkrun. This would be my 6th run at Winchester and I had never “Gone sub 20” on this course. In November of 2013, I had got a 20.30 and finished in 9th place. 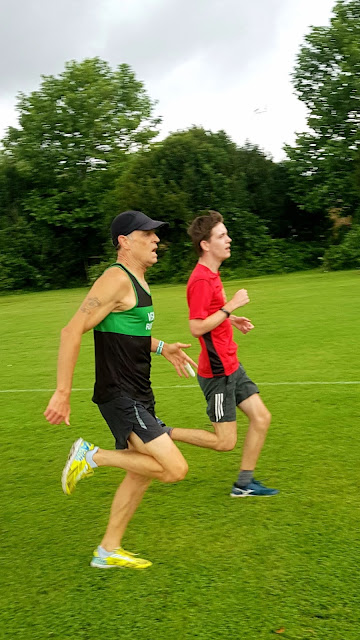 It didn’t get much better either... 20.39 in 2014 with 11th place, and that time I went there thinking I was going to “smash it” and came away with a disappointing 20.28 and 28th place. That was in 2018. I can’t blame the course or the conditions, as on that same day, legendary Andy Greenleaf set a course record of 15.35 which still stands. My mates Kev and Paddy also ran. Kevin Willsher in 3rd place with 17.17 and Patrick Connors in 6th place with 17.48. Poor guys had to wait a good 3 minutes for me..lol. I still remember my upset at not even getting close. What had gone wrong? It may be a bit of a twisty course with some sharp turns but it was dead flat and pretty quick still.

Enter 2021. The second parkrun after the Corona virus pandemic (not that it’s over). I got up early, didn’t eat breakfast. Caught a bus at 7.30 to the train station. Got a train into Winchester for 8.17. I casually walked down to the North walls and Leisure centre. A few photos and into the Vegan vest for a warm up of a mile on the field. My breathing already seemed laboured. I told myself to stop worrying. It’s only a parkrun right? My 212th in fact. I carry on jogging whilst smiling and saying good morning to the happier looking folks. All the while, random thoughts come and go… I should have been collecting my 250th shirt by now. Stupid pandemic. I wonder where we are going for breakfast or coffee afterwards? 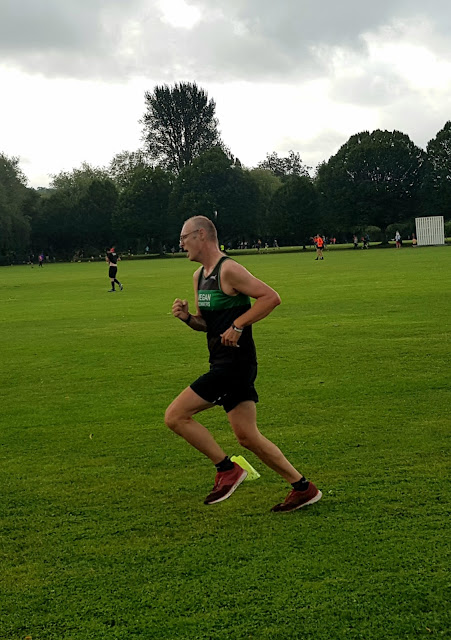 I spot a couple of the infamous Black and Green Vegan runner vests and hone in. Mike and Jon are the first to arrive and then James, Jhon, Matt and Ceci. Not a bad turn out at all for an unofficial meet up. We head to the start and Mike tells me to get to the front. Mike and Jhon say they are running together. Both are faster than me but today they are going to enjoy the easier pace, unlike me who will suffer and wish for my life to end on the way around. 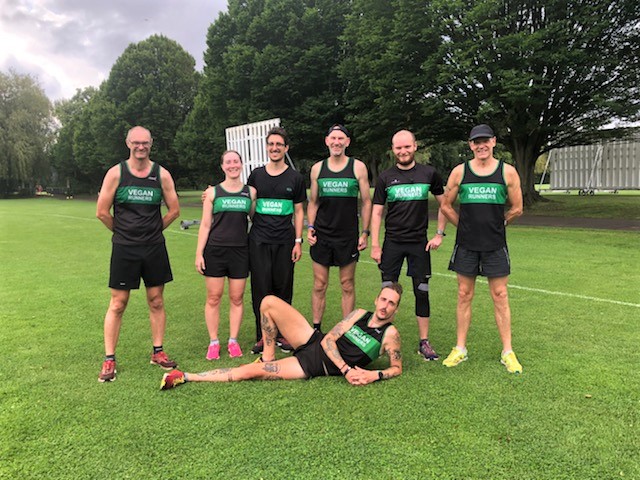 Good to see that Tim is still a big part of Winchester parkrun. He is race directing again today and counts us down to start. I feel a lot more confident about the course today and I shouldn’t get lost like last week at Itchen valley. Off we go…

Ok, a sub 20 requires.. 3 miles at 6.26 pace and we allow 45 secs for the 0.1 of a mile. Yes, I still “talk in old money” as one vegan runner told me the previous week (not Jhon or Jon but John). That’s miles and not kilometres. This made me laugh a lot. I start off okay following the plastic discs on the grass of the field as we skirt around the outside. The grass feels a bit wet underfoot as the concrete path we are now on feels a bit slippery but all is good as we run into the next field and I thank the marshals. This is hard work! I sadly pass the first mile in 6.33. Maybe not on for the sub 20 but I can still go for a course pb which is currently at 6.35 pace. I am 2 seconds up on that at least. Take the positives! It doesn’t get any better though as I jump a few muddy puddles and dance around the roots of the shadowing trees above me. Mile 2 in 6.37. This now gives me an average pace of 6.35! which will equal my 20.28. No good. Now is the time to push harder even though I am already really suffering. On the final mile there are also now people to dodge as I lap the slower runners. I overtake on the left when it’s possible. 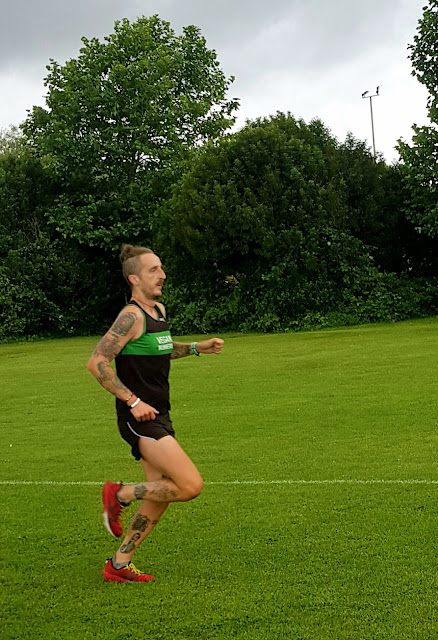 Keep pushing Dean. I struggle a bit mentally as I couldn’t remember if it was 2 or 3 laps. Even though (as Matt tells me afterwards) there are Kilometre markers on the course. Anyway, it’s 2 and a half laps and I finish my 3rd and final mile in 6.25. 3 times 6.25 would have been ideal but at least I should get a course pb but by how much? I run harder, a majestic sprint finish.. or so I think. I probably haven’t gone much faster but it feels like I have. The course isn’t necessarily short as all the parkrun courses are accurately measured. Yet I come in with 3.03 miles on the watch. To my surprise, this not only gets me a course pb but also a sub 20. The sub 20 I have been trying for. At last. I make it 19.54 but have to wait for the official time by text message later. 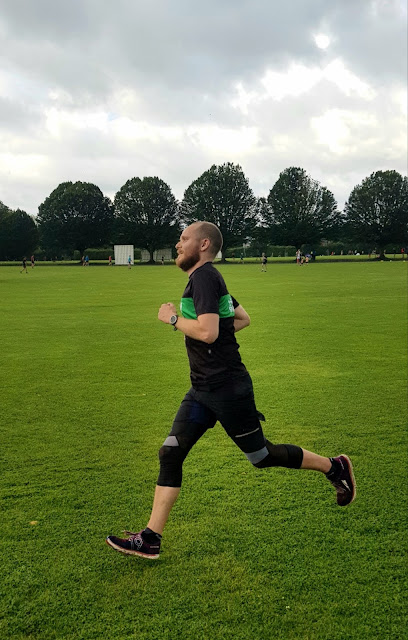 In the meantime, I walk back onto the course and cheer others in while waiting for my fellow Vegans and taking a few bad photos of them. Mike Harper blasts his way in with a sub 22 leaving Jhon behind. 21.56 for Mike in 43rd place but the most impressive thing is his age grading of 73.10%! Even with my time I only manage a 71.84%. Mike’s 403rd parkrun too. His PB here is 18.42. Well done Mike. Next was Jhon Cosgrove who was obviously jogging around and having a great time in 21.57 and 45th place. Jhon has run an 18.24 here! Two speedy Vegans indeed. 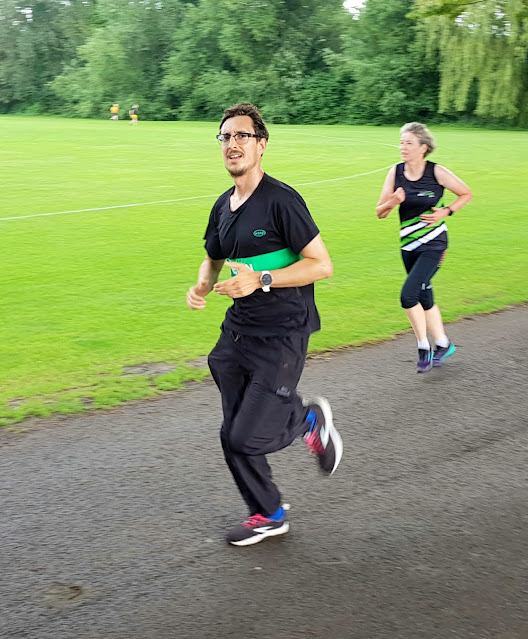 Then in came James Pittman looking quite comfortable and relaxed I thought. 22.35 and 53rd in position. His first time on the course too. Jon Taylor to follow with a course PB of 23.51 and 73rd place. This was Jon’s 252nd parkrun. The next day he managed a 22 mile run as well! Matt Salisbury next with a time of 26.38 and 147th. Another first timer here. Matt was taking it slightly easier today as he had run a pretty good half marathon time the day before for marathon training. Ceci was not far behind with 26.56 and 156th. Another first timer on the course. She may have been the last of us but she sure looked like the happiest out of the lot of us. Smiling on the way around. Well done all. 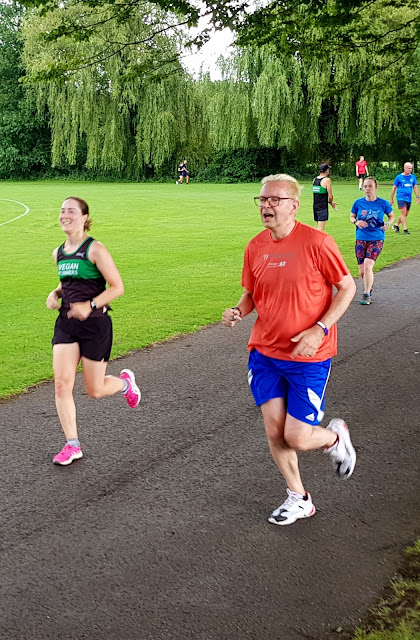 It was then time to get a group photo and head into town for Coffees and a chat. We grabbed a stranger to take the photo and she said “say cheese” she instantly realised what she had said to a bunch of vegans and looked a bit embarrassed as we laughed and saw the funny side of it. She quickly followed up with “Say Tofu”. It was a lovely morning and I was so happy to get that sub 20 despite the pain and suffering all the way around. My official time was 19.53 in the end. That is now a sub 20 at 14 different parkrun locations. So close at many but some nowhere near. The adventures of parkrun continue… Go Vegan and don’t say cheese. 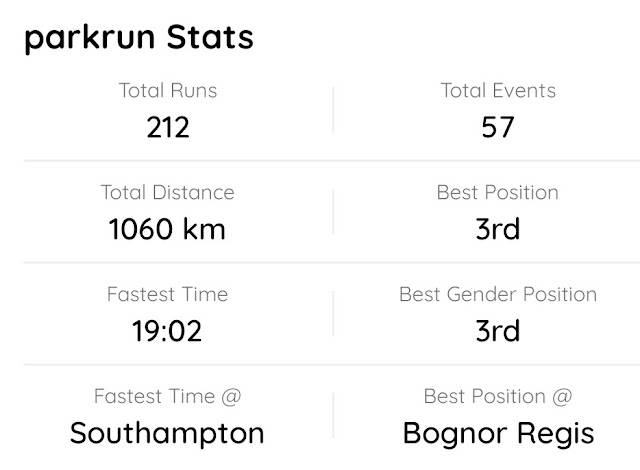