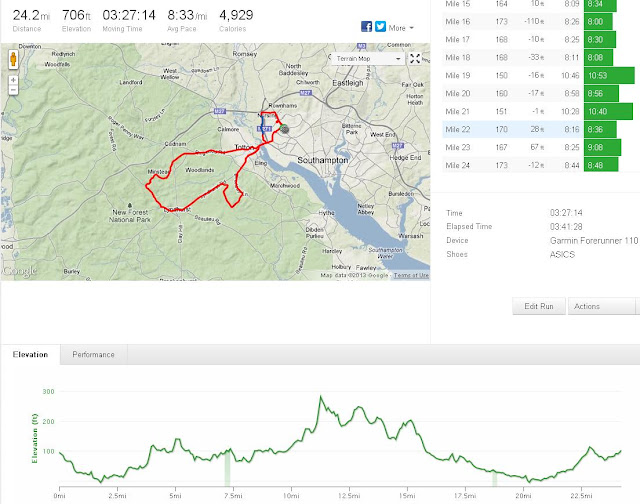 I spoke to my running buddy Lawrence and he was up for a training run. London marathon is only 7 weeks away afterall, so i'd better do some miles! I do run solo quite a lot but it's much better to be accompanied by a fellow runner. I was planning a rough 20 mile route that I had never run before but had done parts of the route on various other runs. Sometimes I will be on Google maps for hours on a Friday night looking at possible routes to run. I hardly ever run the same route twice, although a lot of the routes can be very similar.

We set off and ran towards Millbrook and it was surprisingly cold still and I thought it was going to be warmer due to what they promised in the weather forecast. I had my rucksack filled with drinks, gels, a spare t-shirt, my phone and a camera to take a photo or two, plus you always need a bank card just in case you fancy stopping at the pub when you decide you've had enough. (Larry leaves his at home on purpose!)

Past the saints pub, then Redbridge towers and over the bridge to Redbridge flyover. The digital clock told us that it was 4 degrees this morning. There was a lot of traffic on the roads as we went into Totton and towards Rushington roundabout. I am not too keen on running near busy roads. It didn't help that I recently read an article about the increase of runners going to the doctors and complaining about their breathing. Turns out they have Asthma from inhaling the fumes from the cars! Anyway...

Up the horrible Hunter's hill after Hounsdown and then we take a left and run past the New forest wildlife centre and then a right into Deerleap. Now off the roads and into the beautiful and scenic countryside. Nice gravel paths and fresh air at last!

This takes us out to Ashurst by the train station. Lawrence tried to go in the pub to refill his water bottle but it was still closed at 11am. I took a gel and we continued over the railway bridge and onto the most boring part of the route. It's that straight, long 3 mile road from Ashurst to Lyndhurst. There's not much to see either but with the company it didn't seem as bad today. Lawrence was running well and pretty much pacing me as I could feel myself lagging behind but I pushed a bit harder and kept up.

As we reached Lyndhurst we were about 10.5 miles into our run. Through Lyndhurst and a right turn into Emery down. The hill at the start of Emery down kills me everytime but Lawrence was storming up it and I was breathing really heavy now but I knew there was a nice downhill to follow. Emery down is the perfect description for "Undulating" It's up and down all the time and then we took a right into Minstead. This is where we decided we were gonna stop to refuel on homemade cake and a drink. 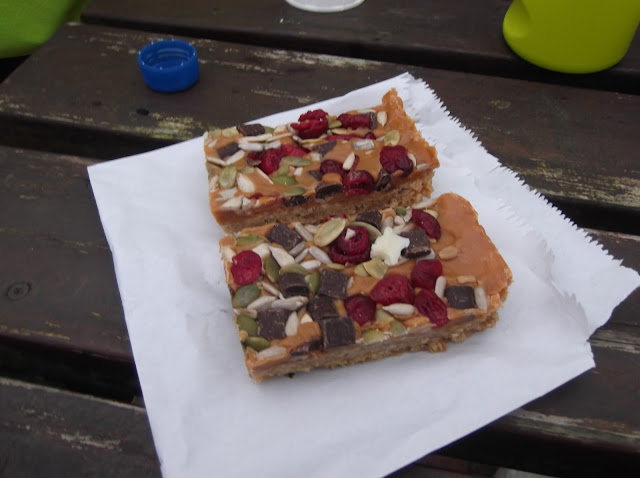 We had done about 14 miles now and hit a half marathon time of around 1hr 47. When we stopped it soon got cold because of the wind and our cold sweat. Lawrence was struggling to get into the run after the stop but we kept going and took a left into Shave wood and towards Bartley. This is a very peaceful empty road and it feels so good to run on even with all those miles in your legs. It's flatter than a 3 day old pint but you do have to cross the A337.
We then run on to the A336 and through Netley Marsh. By now we are both feeling it and stop for another energy gel as we both decide that we are feeling dizzy and I am nearly tripping up on every minute bump and crack on the pavement. Even I am struggling to say much (and I talk a lot when i'm running!)

We push on and decide not to run my original route of the Testwood lakes and just continue into Totton and then home the way we came. This will shorten the route by a couple of miles at least. Lawrence was now struggling more than me but I was still pushing and no longer found it challenging mentally. It felt like I had pushed beyond that point and just wanted to get home.

After 20 Miles Lawrence wanted to stop, so we walked a bit and after some discussion, he told me to continue without him. I felt bad about it but left him my nice warm long sleeved t-shirt that was in my rucksack. I think he had done really well to get that far considering he had got a PB at Parkrun the day before and went Sub 20 again!

I promised myself that i'd stop at 22 miles. 20 miles seemed like such a long way to walk from. I think it was easier to keep running than walk 3-4 miles to my house in the cold wind. I kept on running up to Nursling industrial estate and then up Nursling street. I was now past 22 miles and wanted 23 miles but I was already thinking about pushing for 24.

I managed the 24 miles but had to extend my route home to get it. I was a bit concerned about Lawrence though when I had finished my run and phoned Di from my running club to clear my guilty conscience and pass the blame onto her. Haha. But later he arrived safe and sound. It had been a challenging route with some beautiful scenery. The weird thing is that I never got us lost and that rarely happens! Thanks Larry you were fun to run with :) 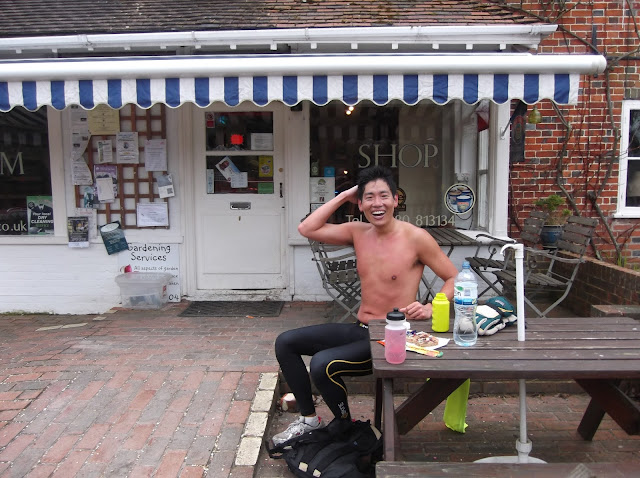