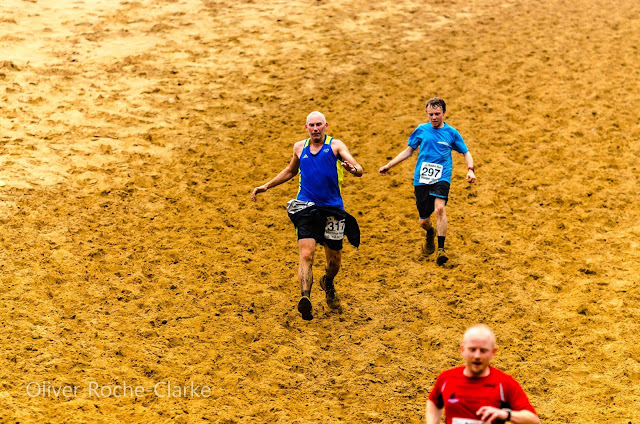 This is a short story about the Merthyr Mawr Rabbit Run. I had booked this race a while ago because it sounded fun and exciting. It was also very near my cousin Phil's in Ogmore-By-Sea. The race didn't start until 2pm though, so could I fit in a parkrun too? Of course I could! I even managed to meet up with Neil Catchlove there. Not only that, but I also entered the hilly Frome half marathon on the Sunday where I would be meeting up with Di Mattingly and Ian Bower.

Anyway... My cousin was nice enough to drive me to Porthcawl parkrun. I stepped out of Phil's lovely warm car and into the pouring rain and wind. I wasn't really feeling it to be honest. I walked along the promenade with my hood up and head down. It wasn't long until Neil came flying past me in his vest and shorts. This told me that I was being a pussy and needed to man up! Off came the longer shorts and the hoody. I wasn't going for a time today as I had decided to put everything into the Rabbit Run that afternoon. I was also running with a heavy backpack.
I caught up with Neil and we spoke about the course and that we were the only Lordshillers to do this particular parkrun. It was a fantastic course along the coast even though it was a bit windy and very rainy. You run out to a giant Chessboard and turn around and then head up what I thought was the hill that Neil mentioned but the bigger hill is after the first one. The thing is though, that last mile is very fast with the downhill. Hence running an easy 6.30 minute mile. Neil actually came first in 18.18. Neil, like me is also a V40. I wasn't racing but managed a respectable time. Second Lordshiller and second V40. We did our cool down and Neil gave me a lift to Bridgend where I decided to buy a coat after breakfast as it was still raining hard and I had left my last coat in a night club in Plymouth somewhere after a drunken night of breakdancing... 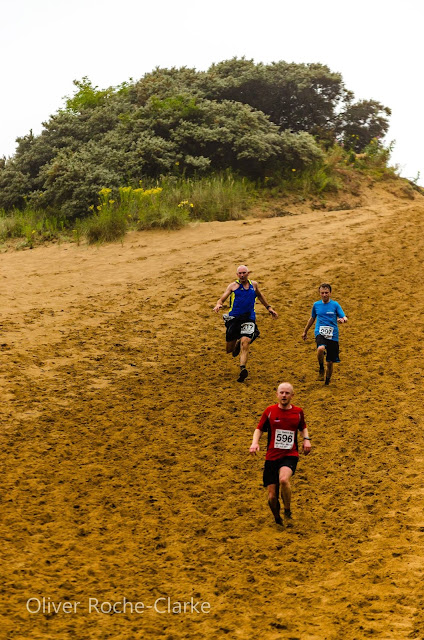 I got the bus back to Ogmore in my new coat and got myself ready for the Rabbit Run. Mostly cups of tea were drank and then my cousin kindly gave me another lift to Merthyr Mawl.
I had to queue to get into a tent in the rain to get my race number. This did not make me very happy to start with. I was in that queue for a good 20 minutes as well. Finally got my race number and t-shirt and then we al waited around in the tent until it was time to head to the start. I chatted away to various people. There was "The Giant Rabbit" which was an 18 mile course, which consisted of the rabbit run twice and then 3 miles on sand! The Rabbit Run was a sensible 7.3 miles but looking at the winning times it was a very tough race. At least with all the rain there would be no heat exhaustion and the sand would be easier to run on right? 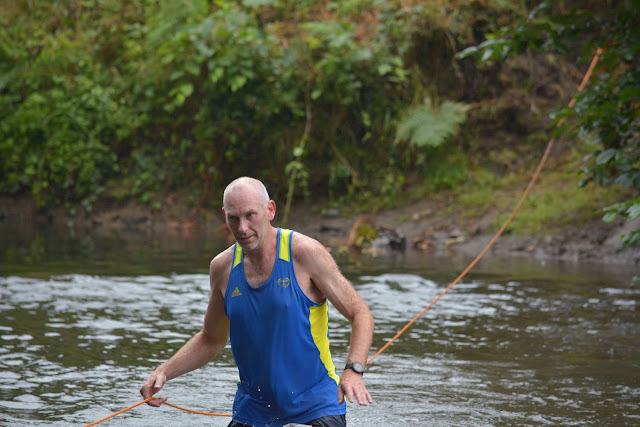 We headed to the start line and on my cousin's great advice, I decided it best to run in my new coat. We stood on the grass while the race director went through the course with some great humour thrown in. I must say that he had me worried a bit. The worry soon turned into adrenaline as we set off. It wasn't too long before we were running uphill in a field. It was tough already but there were some super speedy road parts for me to fly down. Only a couple of miles in, it kind of turned into a scene from a Vietnam film. The trails went into the woods and then the trails were just a bog. People all around me were losing shoes or falling over. I had road shoes but I don't think trail shoes are too beneficial when the mud is nearly up to your knees anyway. This was a very tough and challenging section. Some people decided to walk. I kept my head down and battled on through the rain. Surprisingly I never fell over once! As soon as we got out of those woods I was able to pick up my pace quite a lot. There were some more fields and a car park or two after this but what I had been dreading the most were these sand dunes and the one named "The big dipper". 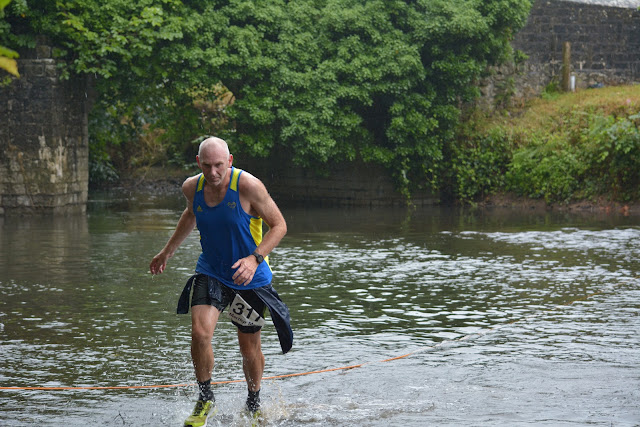 We ran through some more woodland and now I was overtaking a few people but there was one younger guy in front of me who I couldn't catch but at least we were both overtaking people. He shot off ahead at a great pace and then I couldn't see him after overtaking the last guy. I was now kind of leading our little pack which I didn't really like as my navigational skills are terrible. I followed what looked like a path and darted torwards the signs that I could find.

Soon after we were running on these narrow sand trails. Either side were bushes, some of them prickly. I had to really concentrate on keeping my feet in those narrow ruts and not falling into a bush. It felt like I was running fast up and down in these narrow sand tracks. It was very exciting indeed. I was now hunting down more runners including the speedy guy from earlier who I shall call Paul for now.

I got to the big dipper. I knew it was the big dipper as it was a huge downhill sand dune. It was a weird experience. Here I was mid-race and this was my first time running down a massive sand dune. I thought it was probably the closest i've ever get to becoming an Astronaut. I decided that leaning back and taking long bouncy strides down was the best option. Here I passed paul and another dude. I was also wondering if it was possible to break your leg running fast with these strides and digging my heals into the sand. 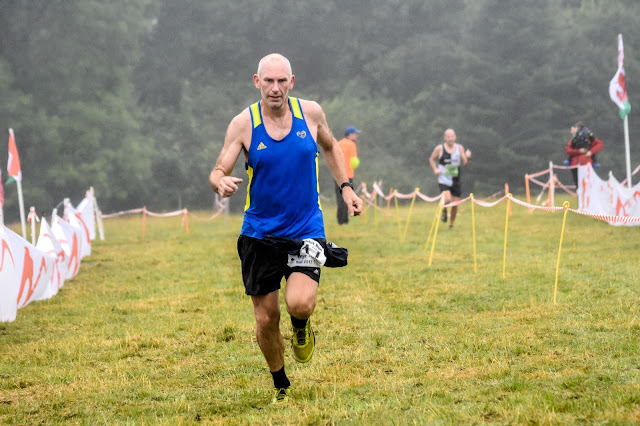 We ran next to a river and followed it. There were supporters on the stepping stones cheering as we ran past Ogmore castle. The marshals were also brilliant on this race. Just after the castle we ran through another rutted field cover in flint and cow pats. The wind was so strong now and here was this crazy marshal lady whooping and cheering with great enthusiasm. I thanked her and called her a crazy lady as I smiled and ran past. I was nearly 7 miles in and still there was no river crossing that I had read about. There were river crossing but they were across bridges. There was supposed to be a waist height crossing somewhere and also a "Secret tunnel". This also worried me as the race director said it was very dark and I might get lost!
Just after 7 miles, sure enough, there was a muddy bank a bridge full of spectators and a rope in the water to grab hold of. The water was too deep to run through or even wade I guess, so you just pulled yourself along on the rope until you got to the otherside. The stones were very slippery on the shore though and I nearly fell over twice. I was running hard and loving it. All the time chasing people down and passing them. Including one very tired looking Paul. Goodbye Paul! 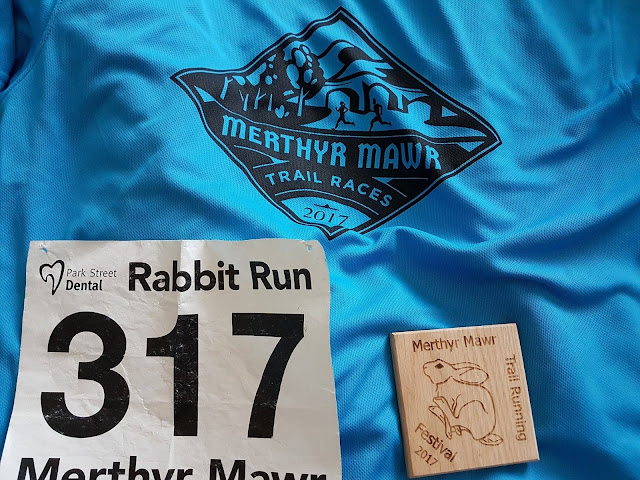 Where was I in the field of runners? It was so hard to tell. Top 10, top 20? I just kept on battling away until I came to something that looked like a cricket pavilion or an old rugby hut? Anyway, this was the secret tunnel. A man guided me in and I ran through, up some steps, left turn and then I was out the otherside. That was fun but shouldn't I be at the finish by now? I ran into the last field and could see the finishing area. Time to try and sprint. One last bit of effort to the end and I was in. I was back at the start but I hardly recognised it for a few seconds until I got my bearings. I collected my goody bag and went back into the dry tent. I was soaked as I had decided to take my coat off at 3 miles, it was too warm but no regrets as to starting with it.
What a wonderful race and well priced with a lovely t-shirt, great marshals and support and check out that coaster! I'll be back to beat my time (63 minutes) and hopefully do better than 16th place.

The next day saw mw run a 1hr35 half marathon on tired legs but it was fun racing Ian but he beat me by 30 seconds. What a great weekend and one to be repeated!